Hey there! I blinked and then two and a half months passed since my last post. I have been unfathomably busy working which makes time pass very quickly. We still got to go on our annual junket out west though. If for nothing else, I figure I should at least do a trip report here. Dad told me I should do a post a week and I said no immediately, and then he said how about once a month? We shall see. For now though, let's get on to the trip.

We booked a hotel at the airport the night before so we wouldn't have to stress getting to the airport at 6am. It turned out to be the most stressful airport experience I've ever had. It was HORRIBLE. Granted it was Christmas eve, but they were so short staffed in every section, bag drop, security, and customs/immigration, that we only arrived to our flight 7 minutes before scheduled departure. No coffee, no duty free shopping, no breakfast, no waters or bathroom, just interminable waits. We had to be shunted to the front of the line twice so we wouldn't miss our flight - which was at 8:05. If we had missed our flight, we would have probably missed our cruise, so we were stressed out as you can imagine. I wrote a complaint letter to the airport and received no reply. I think we'd rather drive the 90 minutes to Burlington from now on and fly out of there, stress-free. 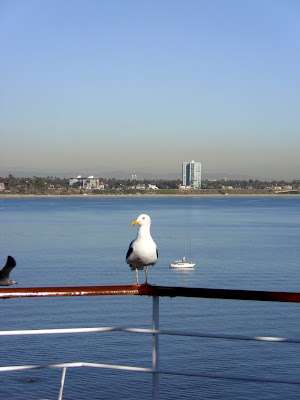 But we made it to the boat and the weather was just beautiful in Long Beach that day. Once we boarded, we had our traditional fru-fru drink plus the free champagne they were passing out. 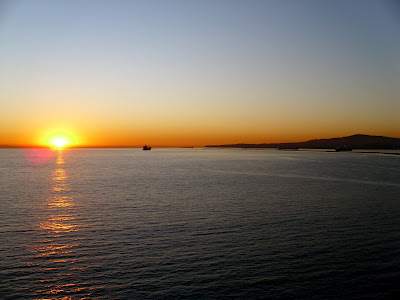 The ship (the Carnival Splendor - the same ship that had that fire and had to be towed back a few years ago) left right at sunset and we took a bunch of pretty shots like this. It was the biggest ship we've sailed on and right away we noticed how many kids there were. This ended up being the downside to sailing when the kids are out of school. 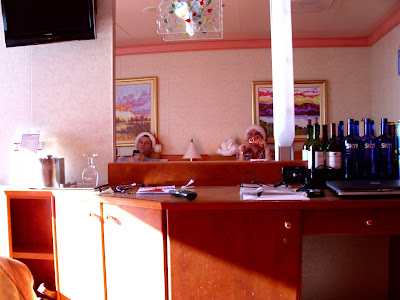 We spent a lot of time in our cabin this trip to stay away from the rugrats. Actually, the teenagers were probably the worst, constantly running and banging and horseplaying all over the place. In the pic, you see the bar we ordered in advance and us in our santa caps which we wore the first couple of days. 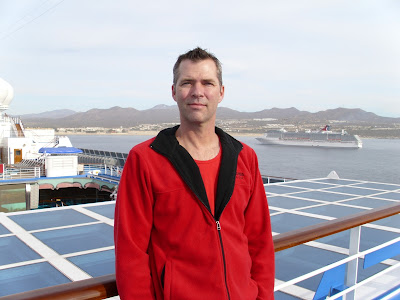 Our first stop was Cabo San Lucas. There were three ships in port that day which made it pretty crowded on shore. It was quite the gauntlet passing all the guys insisting that we purchase all manner of tours and wares. My favorite was "Hey guys, massage for $20 - includes a happy ending." No gracias. 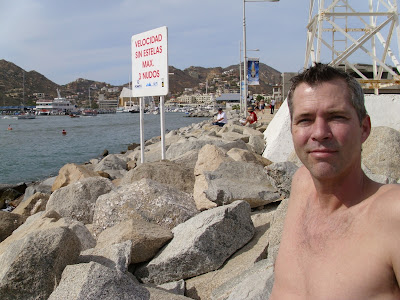 We walked out to the end of the jetty to get away from all that and enjoyed the sun while watching the tenders go in and out of the harbor. This shirtless pic reminds me of the other terrible thing that happened. You know when you were young and you took those nudie pics like I did? Somehow, three of them ended up on the internet. There's nothing I can do about it now, and frankly, I wasn't half bad at that age. Oh alright, if you must, they're over here. 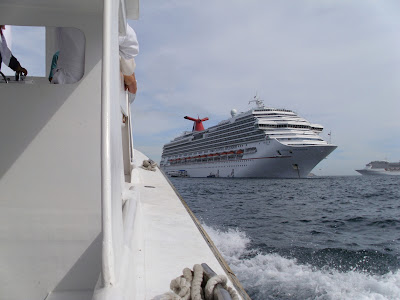 Hehehe, did I get you? Here's a shot from the tender back to the ship. After seeing the news this morning about the cruise ship sinking in Italy, it might be a while before we go again. They really are cities on the water. There were 5000 people on our ship. 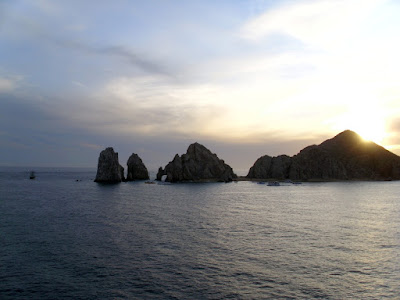 We were treated to another lovely sunset that evening. It wasn't all that warm during this cruise. Cabo was about 72 during the day and when we were at sea, it was probably 10 degrees cooler than that. 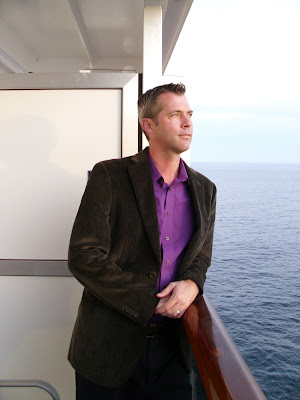 The first formal night was that night. I think I wore the same outfit at the last cruise. I hate clothes shopping though, so it just might be the same on the next one too. 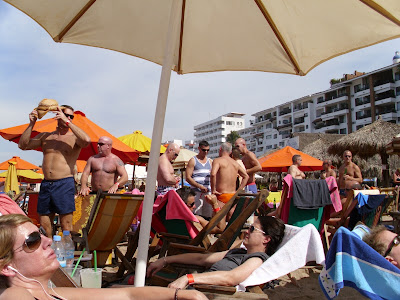 The next day we were in Puerto Vallarta. We decided that we had erred choosing to cruise instead of choosing to stay for a week in Puerto Vallarta. That would have been more fun, and warmer too. Oh well, live and learn. We went down to the beach for a while and then went to this place we love where they serve this awesome shrimp on a skewer with jalapeno, bacon and barbecue sauce. Yum! We took the bus back to the ship for 40 cents. 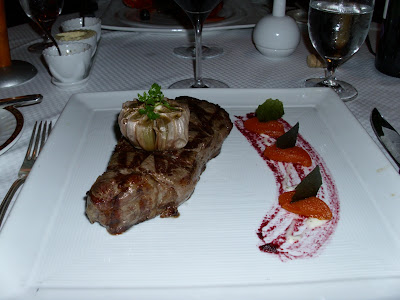 We had reservations at the fine dining restaurant aboard that night. Here's my New York steak with garlic. We ate at this place twice because we were underwhelmed by the dining room this trip. The food was just okay, and the service was very inconsistent - a first for us on a cruise. Disappointing. 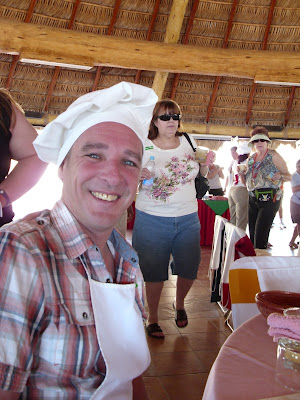 The next port was Cabo San Lucas, again. This time we had an excursion booked called Salsa and Salsa. It turned out to be the highlight of our trip. There were free flowing margaritas the entire time. This was not mentioned in the description, so it was a nice bonus. We learned to make 7 different salsas, margaritas and guacamole. We ate all kinds of things with our creations and then once we were full and drunk, learned to dance the Salsa. 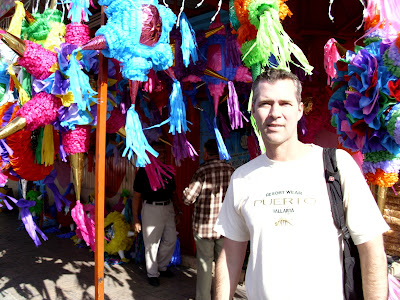 The final port was La Paz which is in the gulf of California on the sea of Cortez. It was a lovely little town that Serge and I explored on foot before haggling with a couple of guys and their boat for a trip out to see the whale sharks. 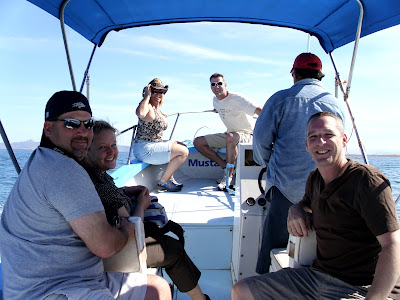 Basically we got the same excursion the cruiseship was selling at $129 for $25. It was only after we got way out there that I thought about what would happen if that little outboard motor died. Thankfully, it didn't. 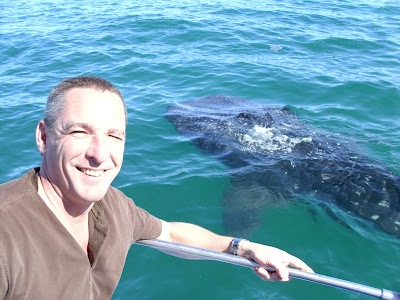 And we got to see the biggest fish in the oceans, the whale shark. Neither a whale nor a shark, but a plankton eating fish. Poor guy had several boats and lots of skin divers pursuing him. We could have gone in but the water temp was in the 60's. No thanks.

The next two days were sea days heading home. We stayed in our room most of the time and watched movies. It was pretty relaxing actually. We celebrated Serge's two months of not smoking cigarettes (YAY SERGE!!! He's at 10 weeks today) and did the countdown for New Year's Eve.

We were ready to get off the boat before we arrived in port which was also a first for us. It just didn't measure up to our previous cruising experiences. A fluke or a trend, that remains to be seen. 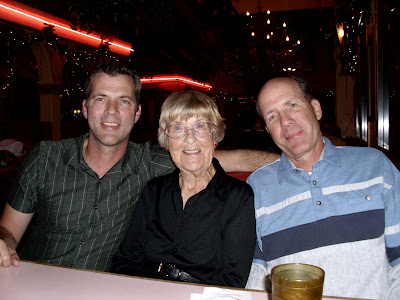 When we got off the boat, we had lunch with friends and then went to dad's house. Went out to dinner with Grandma and had Mexican food. I had a really good Pozole. 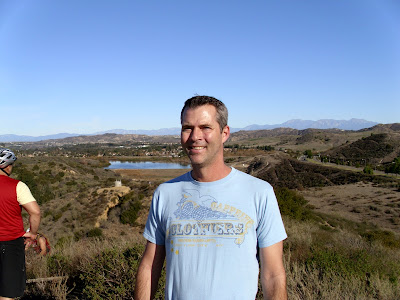 The next morning, dad and I went on a hike while Serge stayed behind working for his clients. The sales tax changed on Jan 1st up here so he had to adjust things on his client's websites. It was a fabulously beautiful day. In fact the first four days off the boat were incredibly warm. Much warmer than any temperature we had in Mexico. Go figure. 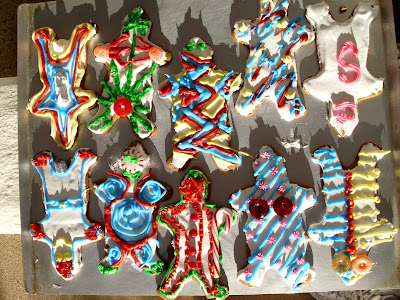 Then it was off to camp mommy where we had the annual gingerbread men decorating party. We really got our art on. 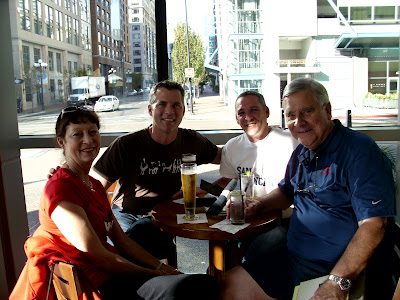 The next day was mom's birthday and we planned a secret getaway for her. We went down to San Diego and stayed a night at the Omni hotel (very nice place) so we could eat at Nobu! The pic is of the hotel bar where we had a little drinky poo before getting dressed up for dinner. 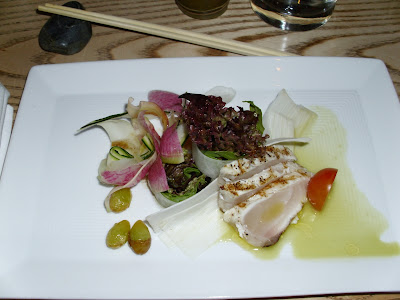 Nobu didn't disappoint either! We got the Omakase which is basically the chef's choice menu. Everything was fabulous as usual. One of our favorite dishes was sea urchin. I'm not sure if I've ever had that before, but it was scrumptious. It was nice to treat mom on her 65th. 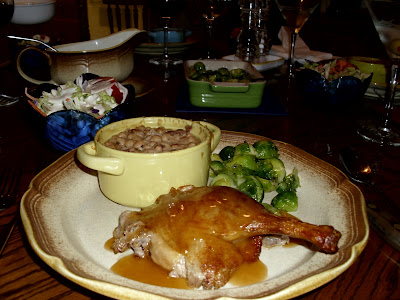 The next night, mom whipped up some beans and duck with brussel sprouts. She should open a bistro with all her fab recipes. I'd invest. Serge put up most of our family recipes on-line which is nice when people want the recipe for something we made from the book. I suggest you start with her famous scalloped potatoes. To die for. 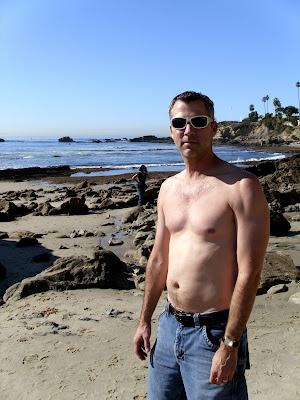 I put on about 6 pounds this trip (since all we seemed to do was eat) but after I saw this shot, I decided to stop beating up myself over it. I started the diet Monday but have exceeded my daily calorie limit every day. I'm down a pound nonetheless. I just want to drop ten before summer. 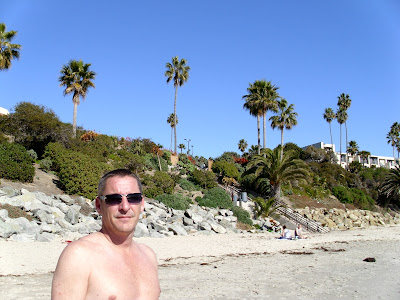 Our friends from LA came down and we went to Laguna Beach together. It was 82 at the beach! Unheard of even in summer for Laguna. We walked around the tidepools and had lunch overlooking the Pacific. 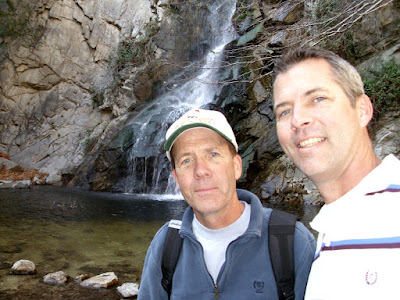 The last day I went off for another hike with dad and we went up to Chantry Flats and hiked to the waterfall. It had started to turn cooler by then though it's nothing like what we have here today in Montreal. It's 0 degrees Fahrenheit. Ugh. 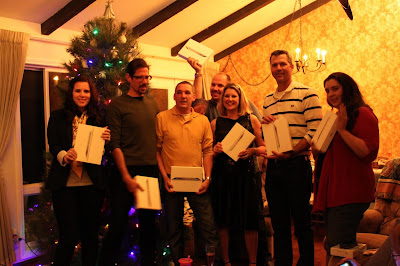 Finally, the big night and the gift exchange. Mom floored us all when she gave us all ipad 2s. It's my favorite toy now as it is Serge's. I just can't put it down!

Thanks for coming along if you've made it this far. Love to all. Keep warm!
Posted by tornwordo at 12:44 PM 17 comments: