So far summer has been amazing! I finished working about a month ago and every day is just a joy to wake up to and think, "What do I want to do today?" The life of a teacher, while not the highest paid, is one of the most gratifying. Plus summers off. I spent the first three weeks of June finishing up my evaluations and then began to plan my weekends. That's because Serge signed up for school. His program is aimed at people who are working so the courses are Wednesday nights and weekends. Which leaves me alone on the weekends. 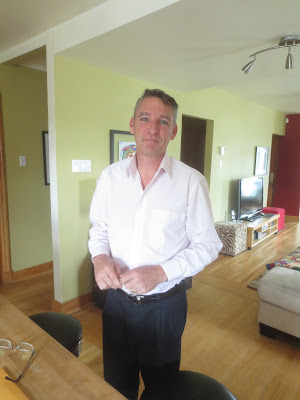 Here he is before going to class on the night where they took pictures for their linked in profile. He is so handsome. So the first thing I did was plan a little getaway to Massachusetts for the fourth of July holiday.


I stayed with our friends who had time to get most of their house organized since the last time I saw them at the end of July. They have a beautiful property in Worcester (why is it not spelled Wooster as that is how they pronounce it?) and we enjoyed little junkets, barbeque and movies. Here we are in Portsmouth, New Hampshire, which is a lovely town on the water. It took us more than double the usual time to get there as EVERYONE was heading up to vacationland for the holiday weekend. 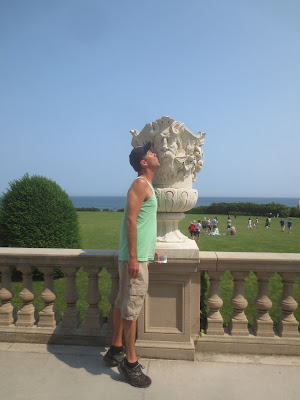 They were so sweet and bought me a Boston hat and took me to Newport, Rhode Island, thus helping me cross off another state from my list. After Alaska later this month, all I will have left is Iowa. Here I am on the grounds of the Breakers, the Vanderbuilts "cottage". Or what the filthy rich call a cottage. 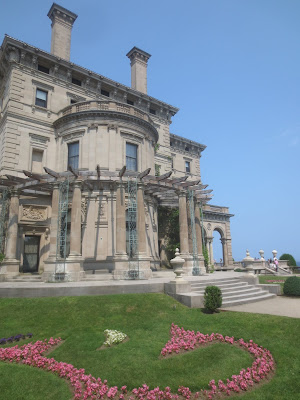 It was right up there with Versailles in the opulence department. Everything dripping with gold and platinum. There were 28 rooms just for the servants, whom they called "staff". This wording is supposed to indicate their benevolence as uber-wealthy. When we got back to their place, we watched a bunch about the Vanderbuilt's rise and fall. Essentially, the early family members built up enormous wealth and all the descendants squandered it. Imagine learning as a child that you would never have to work your whole life. 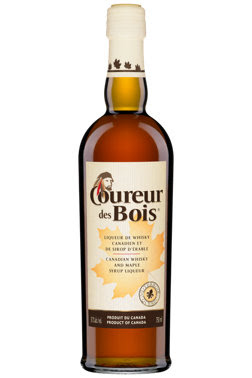 They wanted this maple whiskey that is hard to find in the states so I brought them that as well as other maple treats. OMG it is the BOMB. Just perfect to sip with some ice cubes. We made ice cream with it which was to die for. Not only that, but I got to have a lobster roll in Newport. It was a great weekend with one little glitch. See, the ex-best friends are mutual friends with them. Once they knew I was visiting (one of the perils of facebooking) all communication stopped (their specialty) even after a "Happy fourth" text from them (not me). Petty children, they are. We get it, they hate us, I wish we could all just move on. 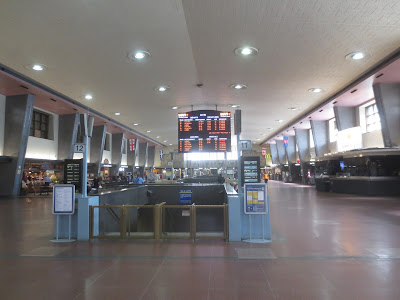 The following weekend I booked a trip to Toronto to see my cousin. Although not as grand as Grand Central, our train station is pretty neat. I love that I can travel downtown to downtown in less time than it takes to drive.


There are huge windows in the train and free Wifi so the hours passed easily. I also had a chance to study for my upcoming travel agent exam. I managed to get through all the materials so now I just have to do a few exercises and review. The big day is next Thursday. I really hope I pass it the first time. Then I will be able to offer family and friends the better deals that I will have access to. My friend Annick has been bugging me to do this as she has and every time I check with her before clicking the "buy" button for flights, cruises etc, she has been able to get me a better price. Now I'll be able to do that for family and friends too. 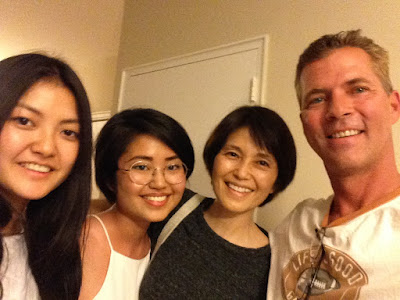 As soon as I arrived, I met up with my old students from many years ago. Layla on the left was a little girl last time I saw her and now she's all grown up. We had a delightful dinner together and then I took the streetcar to my cousin's house. 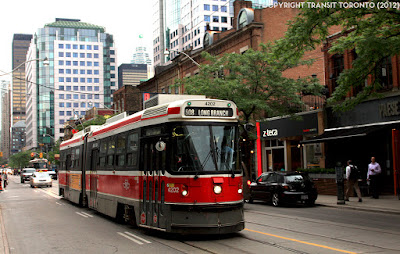 The streetcars are so cool and they have many lines criss-crossing the city in addition to the subway. The day pass was great as you have unlimited hop-on and hop-offs so it was easy to get around town. 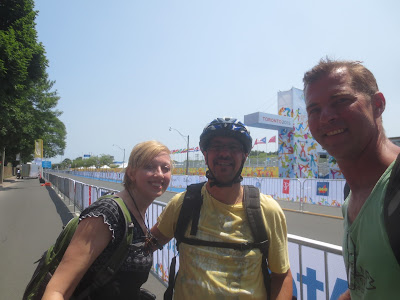 We took a 20 kilometer bike ride into the city the opening day of the Pan-American games. There were all kinds of things going on in the city and by the time we reached the harbourfront, we were famished. I wasn't able to respect our "fit for life" diet while there except for only fruit in the morning. I figured the next best thing is to eat vegetarian the other meals so I had the panini with avocado and goat cheese. One of the best sandwiches I've ever eaten. 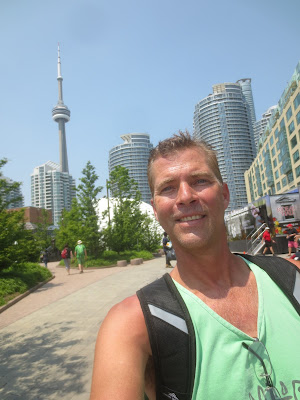 Dang that tower is big. This is still several kilometers away. The harbourfront was buzzing with activity with all the boats, people, zip-line, and airport just across the straight on the islands. I had never really explored this part of town and it was quite the place just to people-watch. 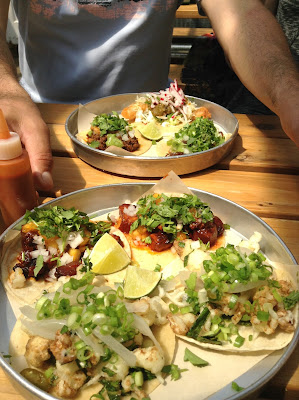 The next day we went back into town and my cousin took us to a place she knew called Grand Electric. Toronto is years ahead of us on the Mexican cuisine, as there are many to choose from, unlike here. That first taco in front is a "crispy cauliflower" taco that my cousin said I had to try. It was really good but I have no idea how they made the cauliflower light and crispy like that. I also had a pork belly taco. Yum. 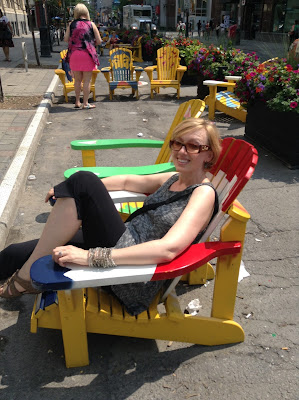 My beautiful cousin, Cindi, was great. See, I had forgotten to bring my blood pressure meds with me so she plied me with Omega-3 and Curcumin to subsitute. My pressure wasn't bad when I got home so maybe she is onto something there. The city has these urban spaces set up so you can relax downtown and there is always a food cart nearby if one wants to grab a bite. 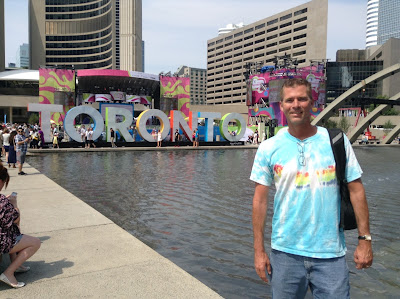 They had a bunch of concerts and activities set up for the Pan-Am games. I got the official pin and everything. They had the Franco festival going on too where I turned them on to Beaver Tails (I only eat one per year) as they had never had one. I love the uniquely Canadian things like that. As Cindi noted, it's like fry-bread, something you find in New Mexico. I had the maple and they had what I usually get, the nutella and banana. 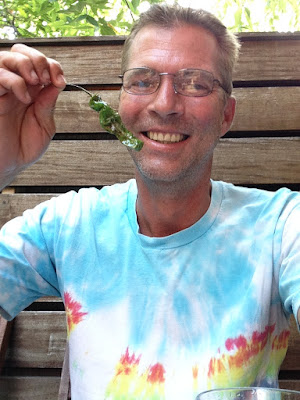 I mentioned that I would like to have tapas so we went to Kensington Market to get some. I love that part of town as it reminds me of Venice, California. Very student/hippie oriented with tons of little places selling all sorts of things. That is a shishito pepper people! I have never been able to find them here and it is one of my favorite tapas dishes in Spain. Just fried in a little oil with salt and pepper. Delicious. It was very authentic and we enjoyed lots of Sangria, chorizo, octopus, olives, and more. 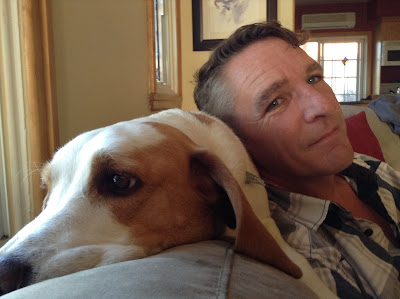 We can't close out without a pic of my men now, can we? George likes to sit on the top of the sofa and look out the window and if he sees a person walking their dog, he dashes out back to howl at them. It is so cute.

So there you have it, all caught up now. I am soooooooooooooo frickin' excited about our upcoming cruise in less than two weeks. Going to Alaska for my 50th birthday and I booked a helicopter ride to a glacier, both things I've never done before so it should be memorable (the price certainly was). Bonus, my brother and his girlfriend are coming with us and he has never done a cruise. I hope he is as impressed as I was the first time. But he is difficult to impress. Fingers crossed. Thanks for stopping by y'all, until next time. MWAH!
Posted by tornwordo at 4:08 PM 4 comments: