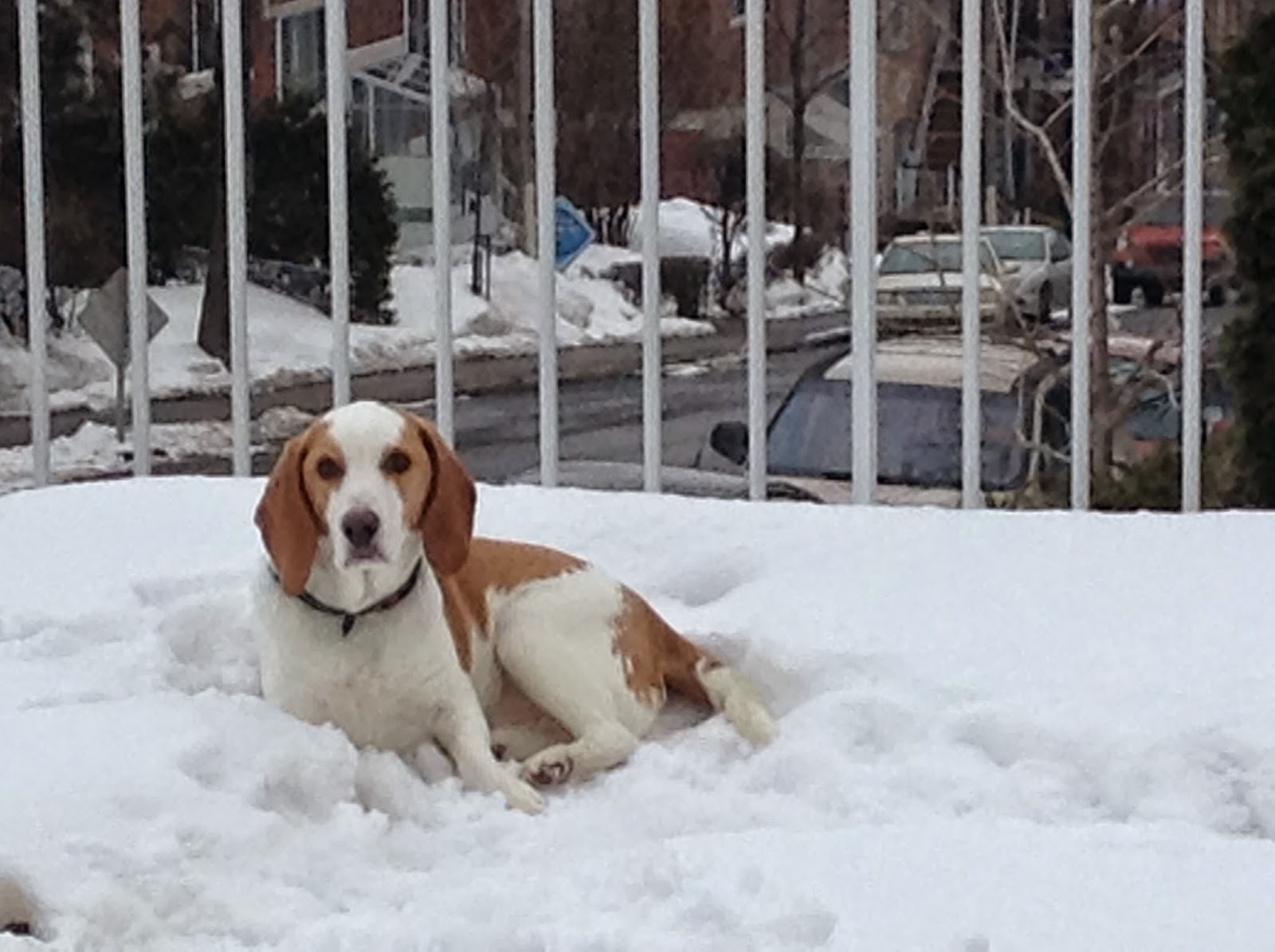 * Although he looks sad as usual, he is all recovered from his kennel stay. The month long med regime did wonders and now you`d never know anything was wrong with him. Yay!

* I sort of broke my new year's resolution. I say sort of because I was asleep when it happened. I had read about the phenomenon of sleeptexting but was horrified to discover that I had done it. I marvel at my subconscious and the text that started out, "I am not a bad person." In a perfect world my texts are blocked but there is no way for me to know for sure. I deleted all contact info so it can't happen again. 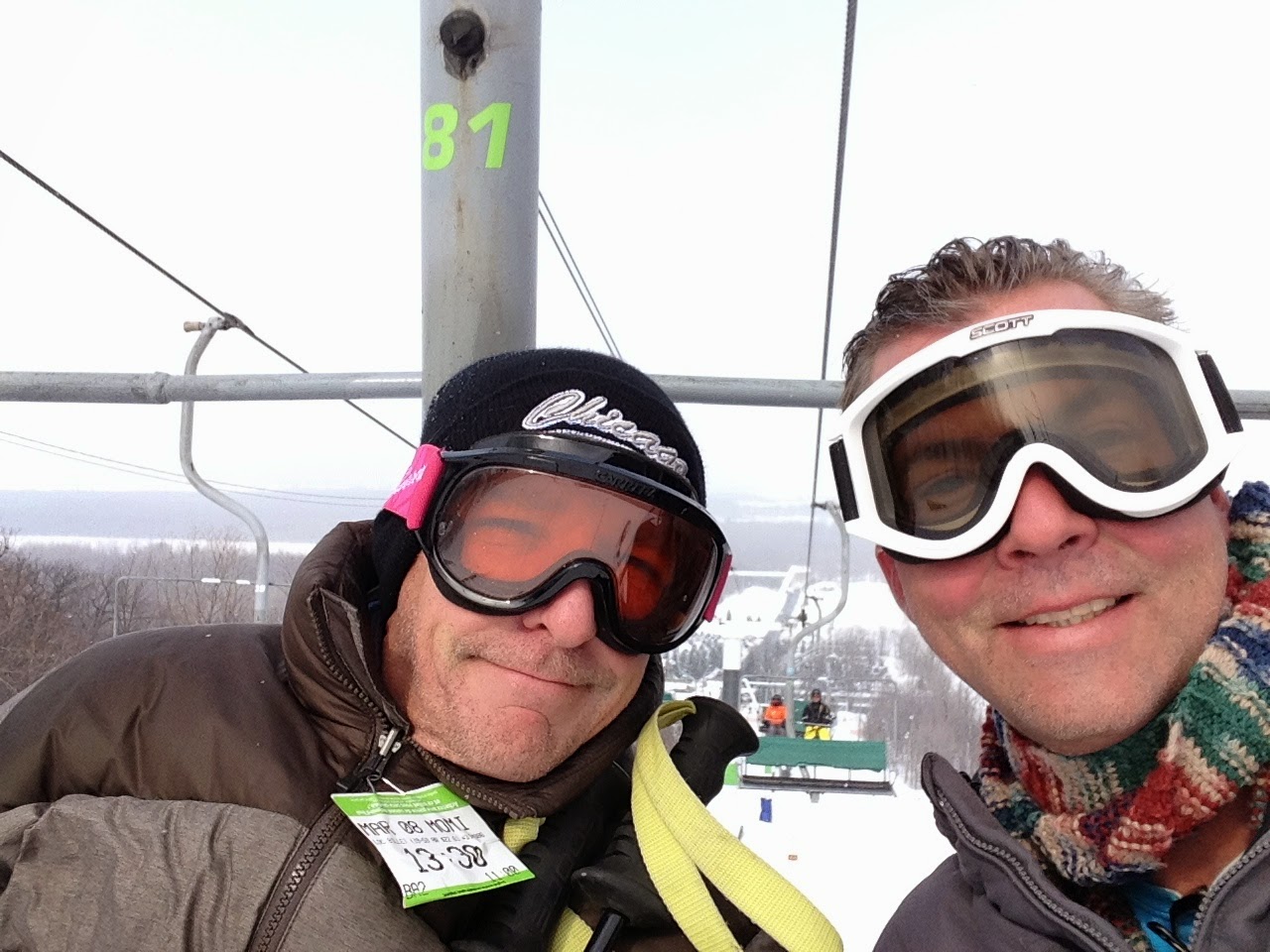 * We did our annual ski visit. We just love our local mountain a 20-minute drive away. Plus you can pay by the hour. We did two hours and it was just perfect. Afterword we got treated to free smores and beer. Plus the place was totally empty, never had to wait in line for the ski lifts.

* Started playing Trivia Crack. Sometimes I get a bunch of answers in a row but other times, like when the sports category comes up, I can't even get one. Who cares what number is on who's jersey? Sheesh.

* My class is kicking my butt once again. I was supposed to start a second class tomorrow but I decided last week to drop it. I know when I was young I worked and went to school full time. At my age I can't even imagine it. 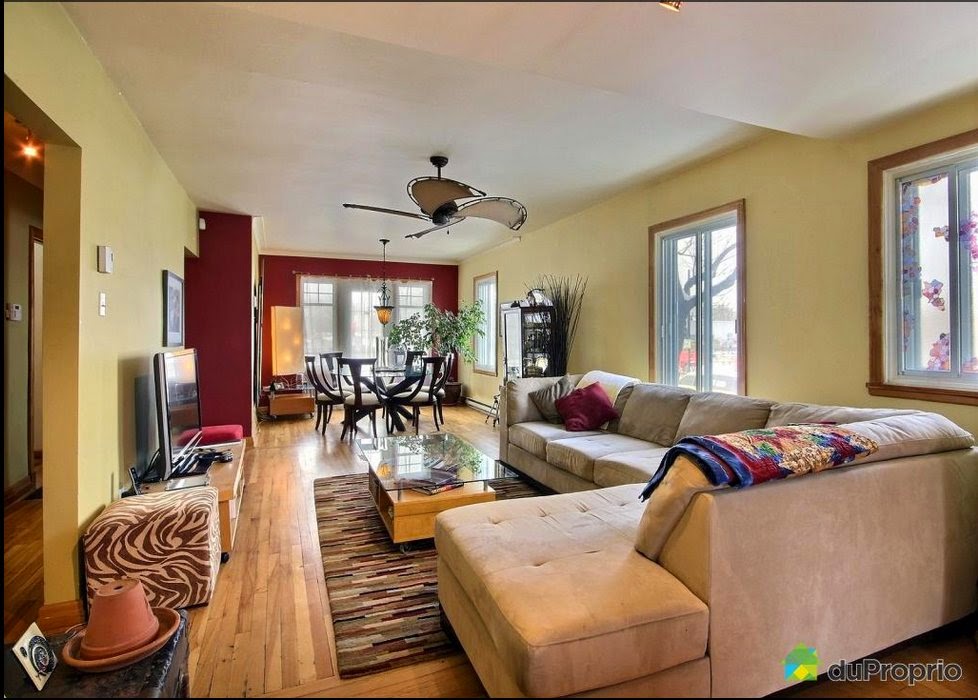 * We put our building back on the market. We are trying to sell this time without an agent. We have been bombarded by agents calling to get the listing. Ugh. We are hoping that this third time is the charm. If it isn't it's not a big deal but if it sells, we may live my dream of travelling around South America for a year learning Spanish.

* Getting ready for a visit from friends who have never been to Montreal this weekend. We are excited to play tour guide and take them for their first ever Sugar Shack. I remember my first time so I hope we have picked a good place for them. It's here.

* Serge and I got on the waiting list for a family doctor finally. I was prioritized more highly than Serge because of my hypertension. My estimated wait time is 6 months to a year. His is at least 2 years. There are flaws in the universal healthcare system.

* As some of you know, I failed on the quitting smoking. I have just been rushing myself and wasn't quite ready yet. One thing I have learned over the last couple years is that you can't rush emotional processes, but that they are indeed finite. I will definitely quit smoking before next winter.

* Speaking of winter, it is snowing once again outside my window. It is so amazing the difference in how I feel seeing the first snow of the season versus the last snow. I'm hoping that this is it, but we usually get at least one snow event in April, sigh.

* We are sad HBO cancelled Looking. It was a great show and even though it was hard for me to watch at times, I wish it would continue. At least Californication and Nurse Jackie are coming back next month.

* Okay that's all I've got today. Thanks for stopping by and I'll give Georgie a smooch for you.

Hey there gang. What a crazy winter it's been up here. Although the biggest snow storms hit South of us, we ended up with the coldest February ever recorded in Montreal. This city has been around for 400 years and yes I know records don't actually go back that far. Luckily for us, we got to escape for a week right in the middle of the worst of it. Because I have a 3 week break in February from the college and my private contract times are set up just a week or two in advance, I saw a week of unscheduledness and decided to see what last minute vacations could be had. 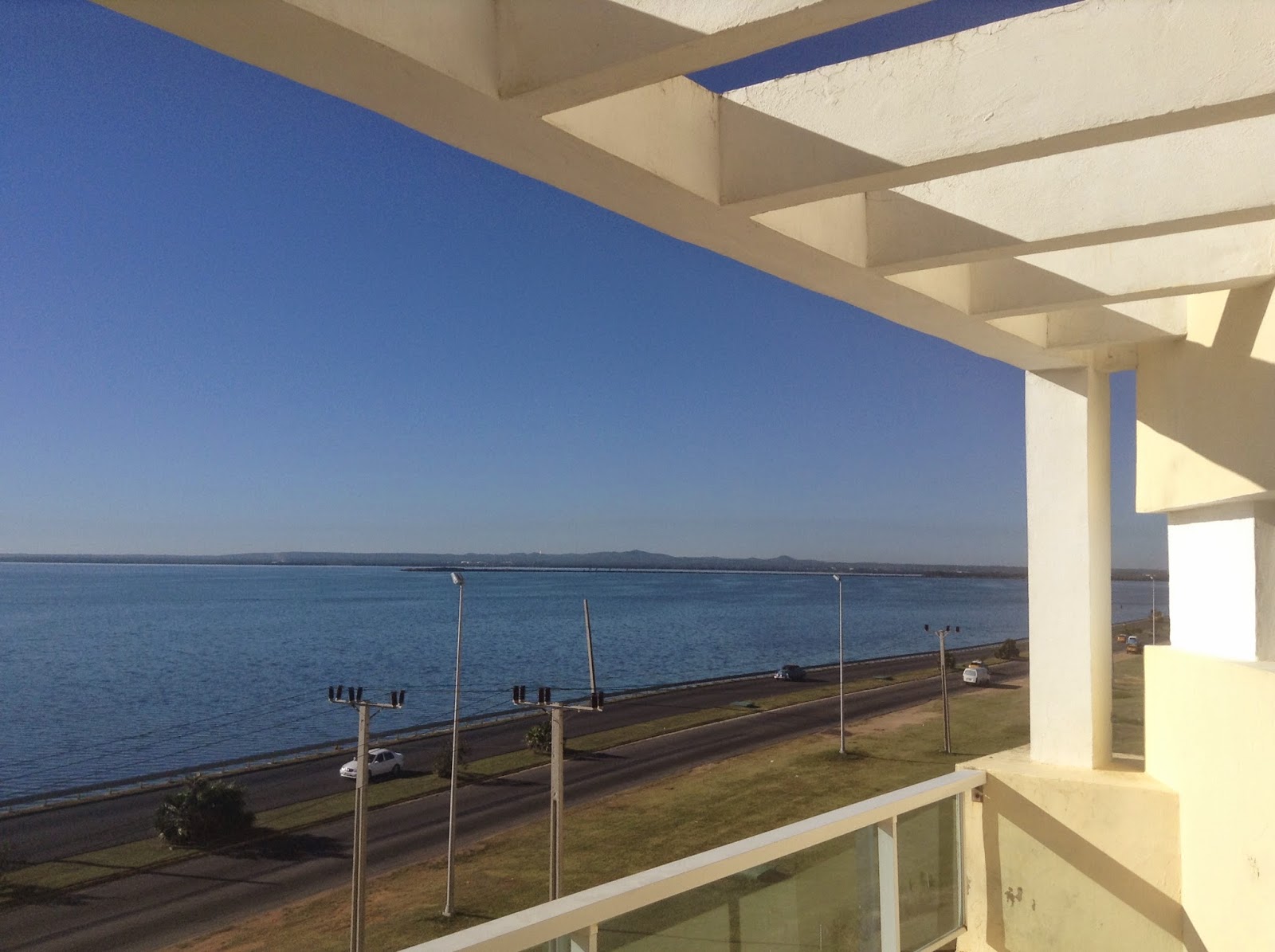 Serge was out at happy hour when I found it. A week in Cuba everything included for $715 CAD!!! Well Serge and I have an agreement that we do not push the buy button unless we are both wanting to so I had to wait until he got home to say, "Can we can we can we can we pleeeeeeaaaase?" And sure enough he was game. We arrived late at night, checked in and woke up to this lovely view over the Caribbean sea. 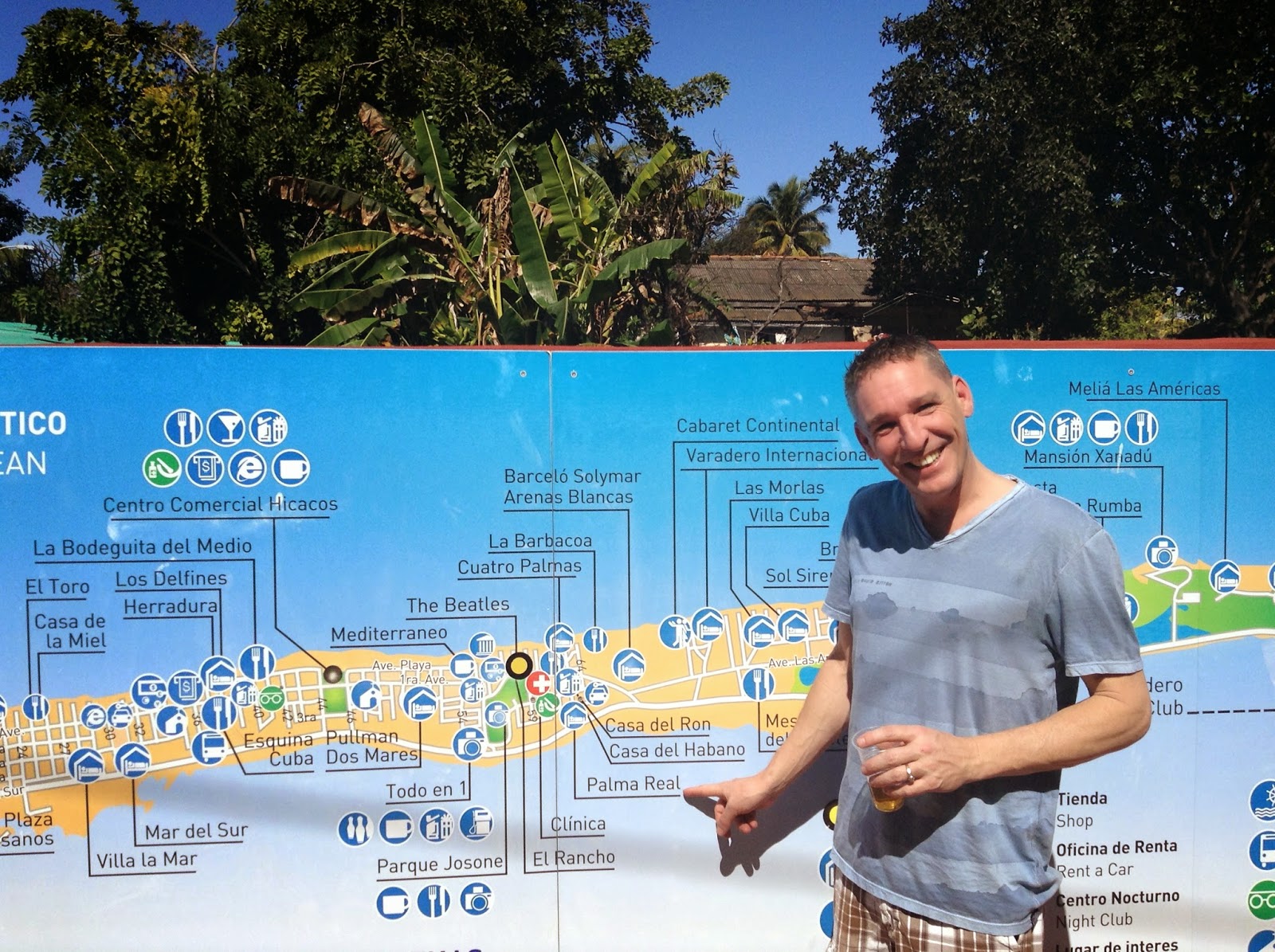 We stayed at the Bellevue Palma Real which turned out to be the perfect location in Varadero. We could walk out of our hotel to the hotel's beach or to restaurants, bars and shopping. The temperature was just perfect in the upper 70's. 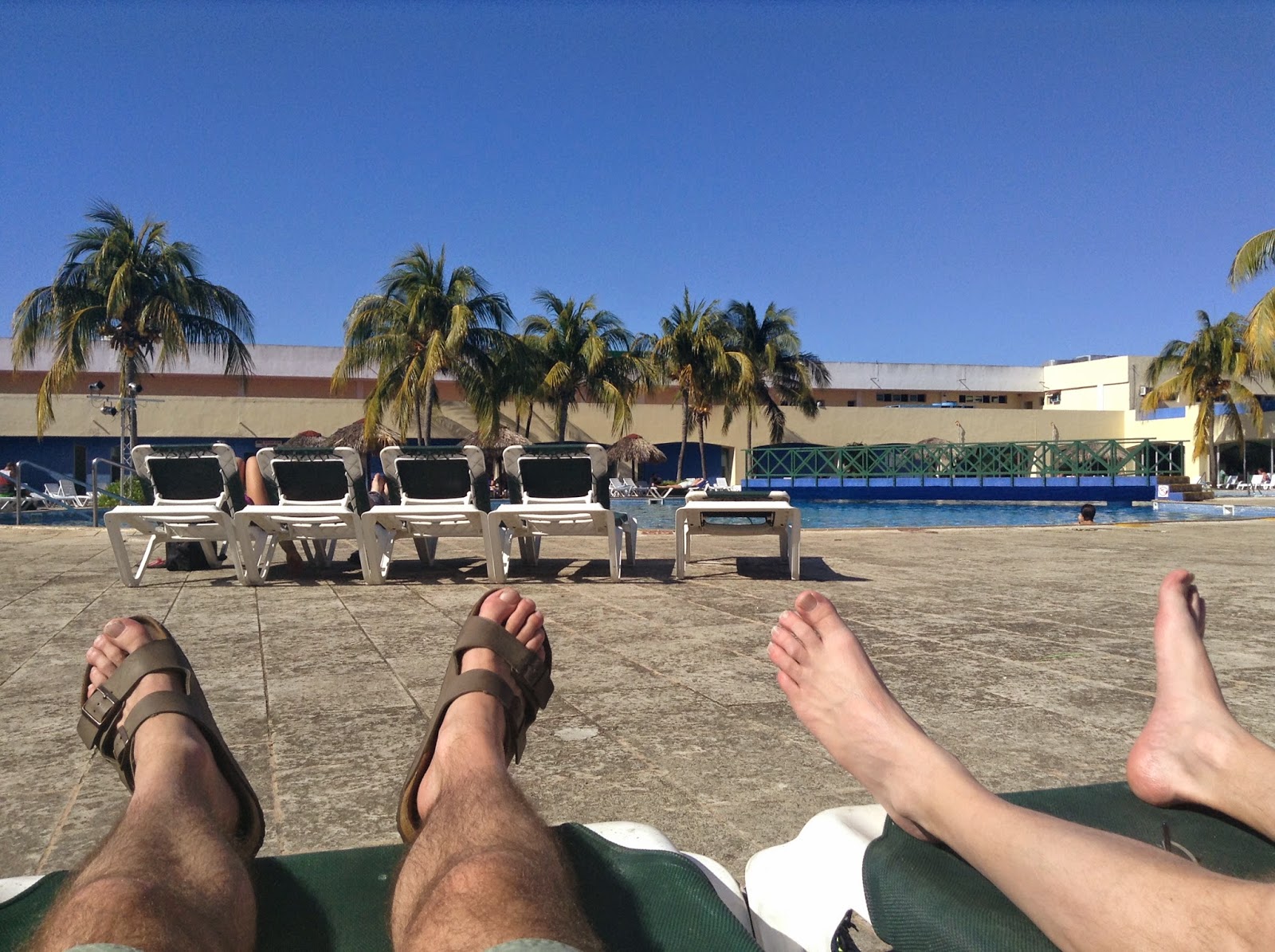 Of course we had everything we needed at the resort so we hung around there a lot too. We had read a lot of terrible reviews about this place and were very pleasantly surprised by the room, grounds, service and even the food. (Cuba is notorious for lousy food options.) 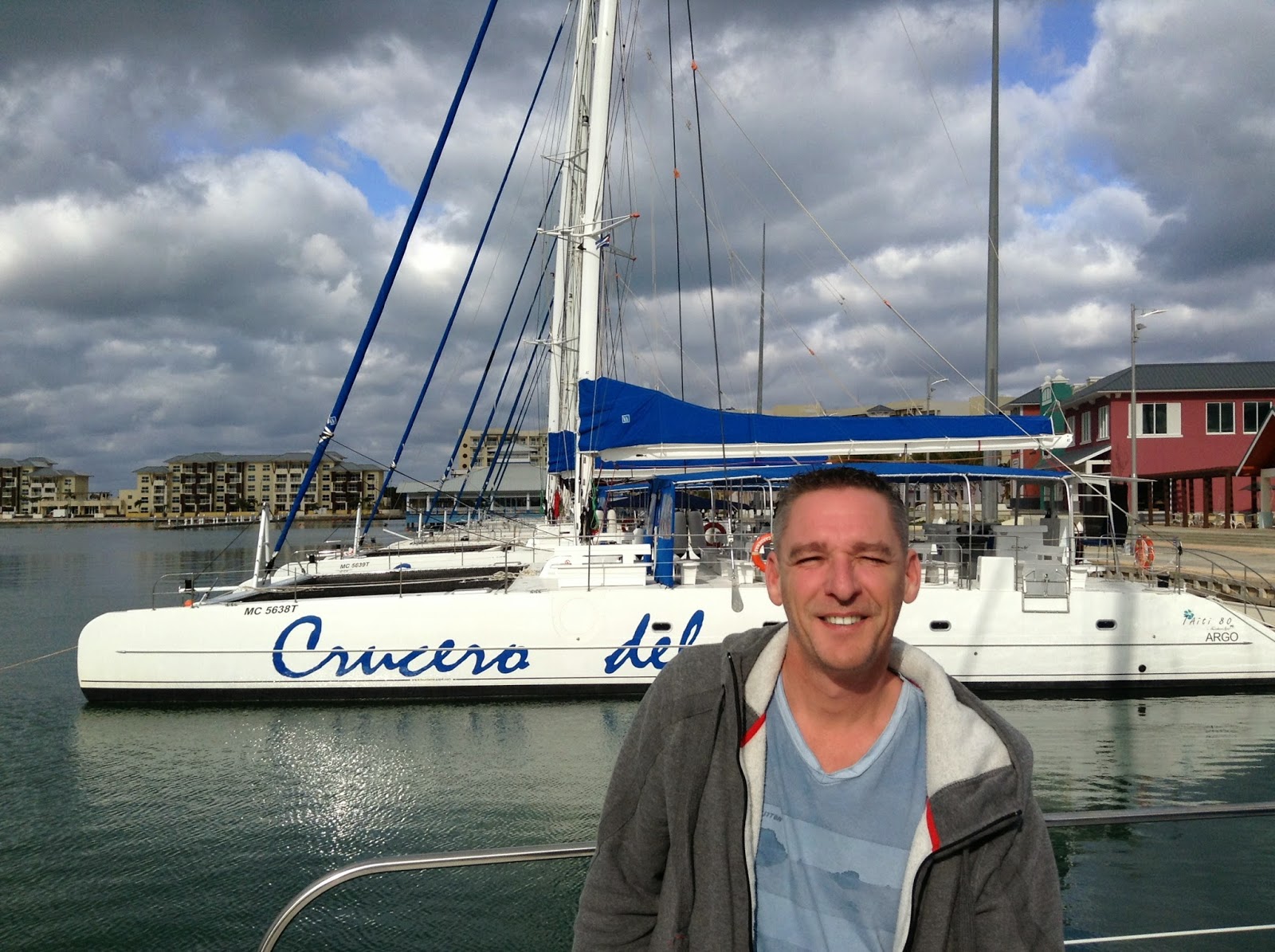 We booked an excursion for the third day, an all day outing which included playing with dolphins, snorkeling, fantastic lunch and open bar all day. The price? $120 per person but I don't know what happened as my credit card was never charged. Wheeeee! 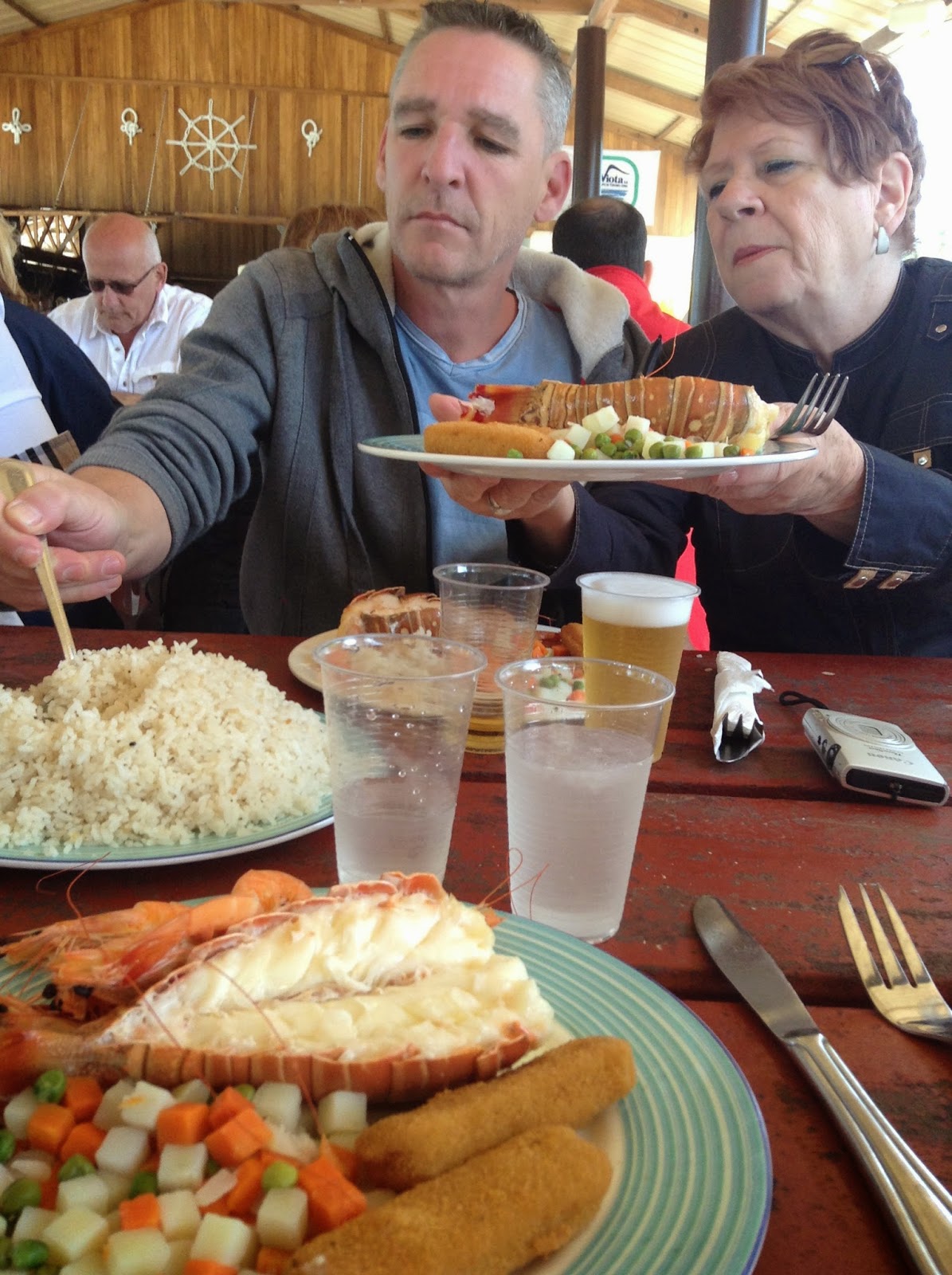 This was probably the best meal we had all week. Serge's mom and her boyfriend decided to join us when they learned how cheap it was. Shrimp, lobster, fish sticks, veggies, rice and bread. Open bar. And a band played great tunes all the while. 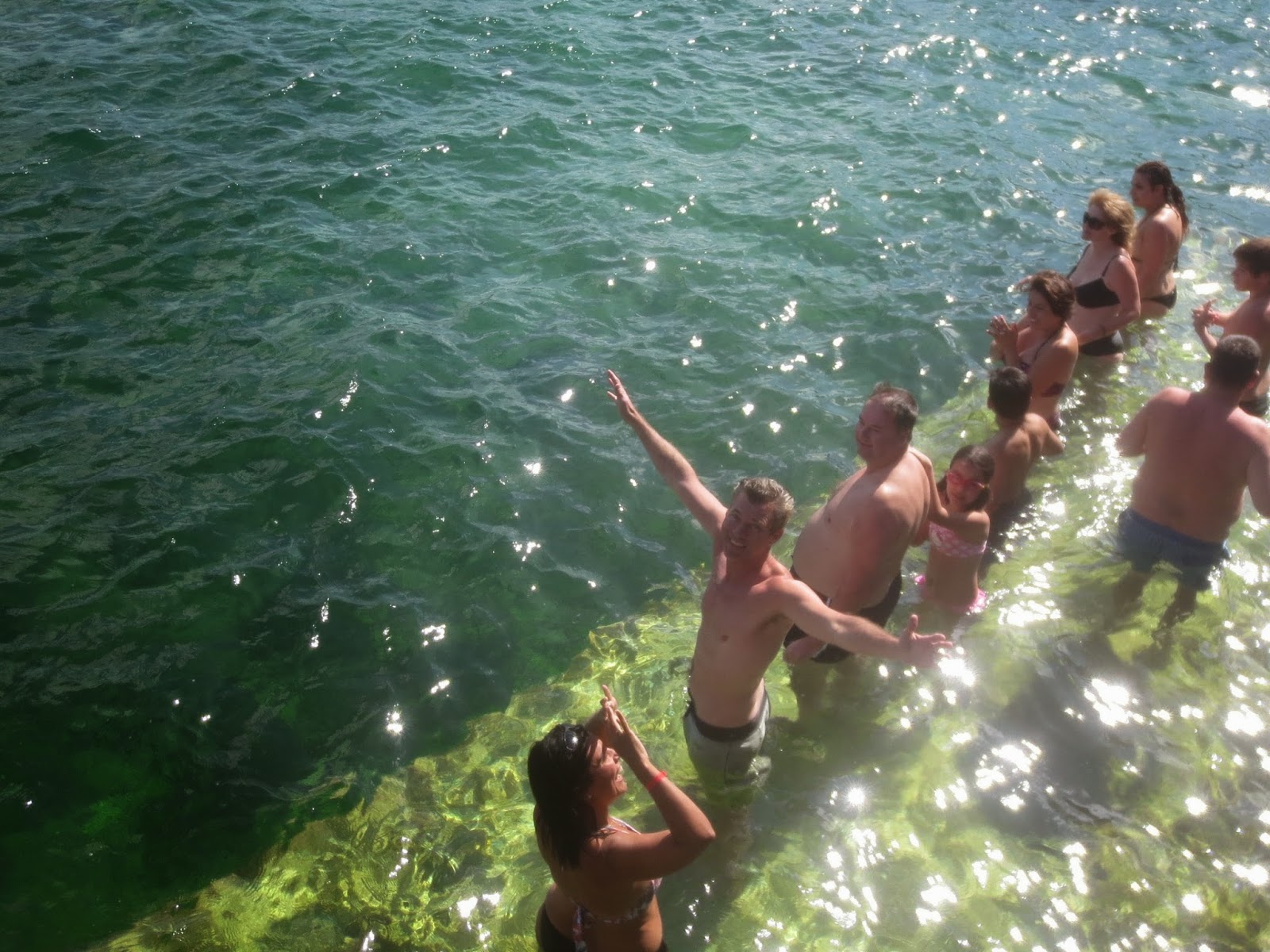 Here I am waiting for the fun to begin. Serge took a bunch of little videos of us petting the dolphins, getting kissed by the dolphin and even picking a dolphin up out of the water. The trainer said that the dolphin was embarrassed since one of us was touching his genitals. Hardy har har. 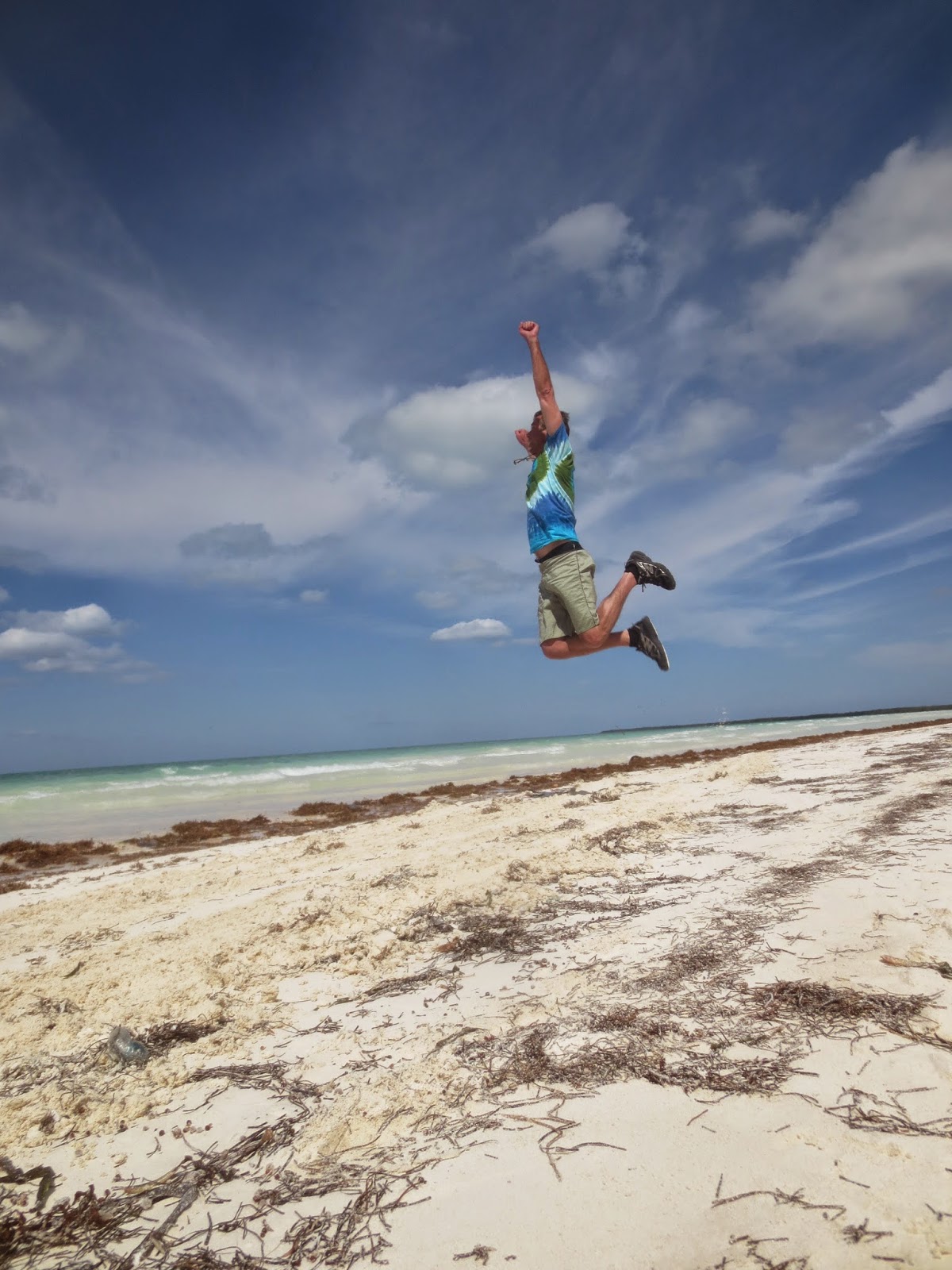 After lunch, Serge and I walked along the beach and tried to get another airborne shot. We have been trying to get one for a couple years now and we finally did it. I have hurt myself so many times trying but this time when I landed on my knees it was sand so I didn't hurt myself too, too badly. The trick is having the camera very close to the ground and of course pushing the button at the exact right moment. Yay Serge! 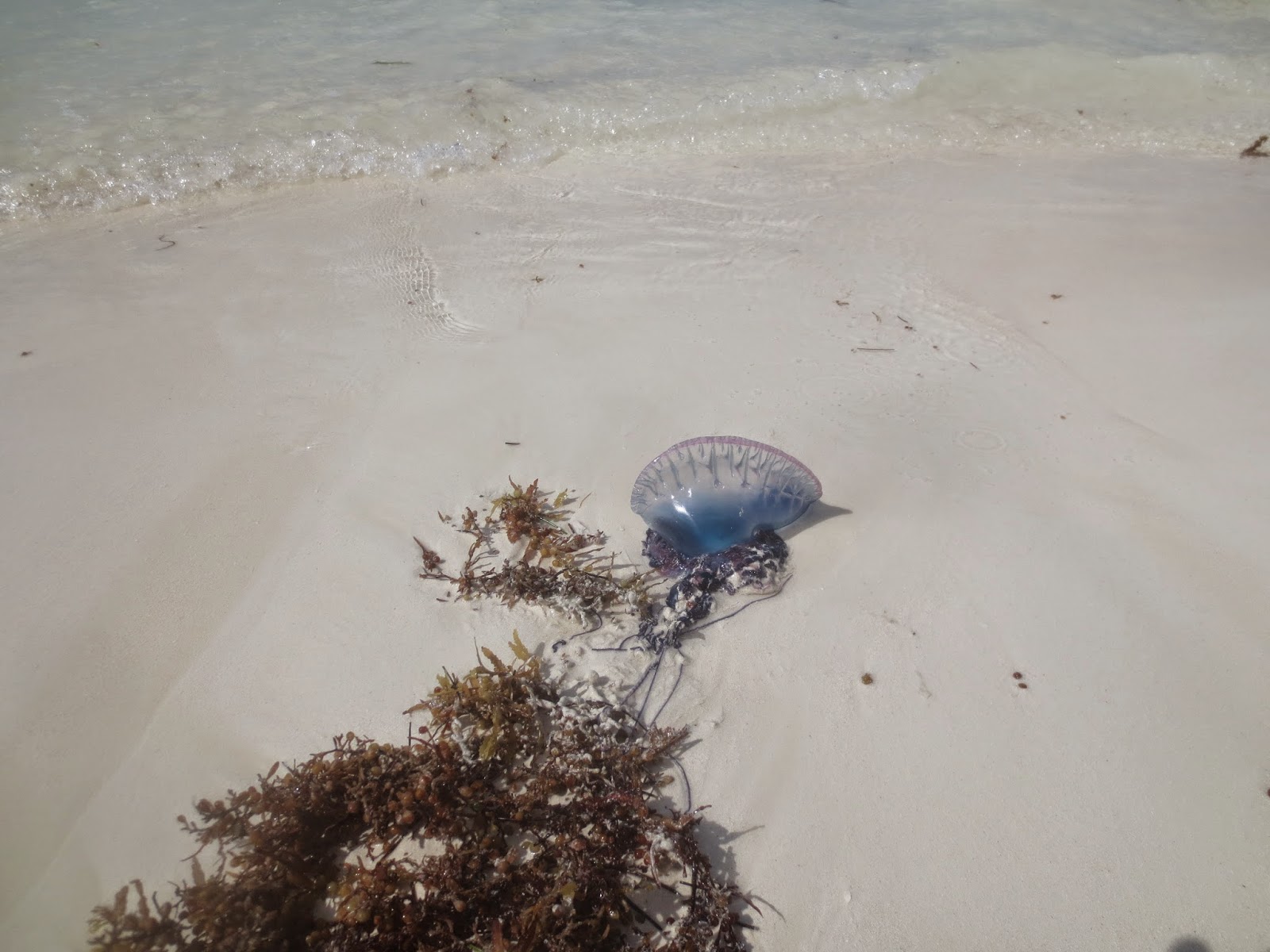 These were littered all over the beach that day. Serge said if you stepped on them, they would pop and sure enough that's what happened. It reminded me of bubble wrap. Later I found out that these were Portugese Man-O-War jellyfish and highly dangerous if you touch them. I probably wouldn't have been popping them if I had known. 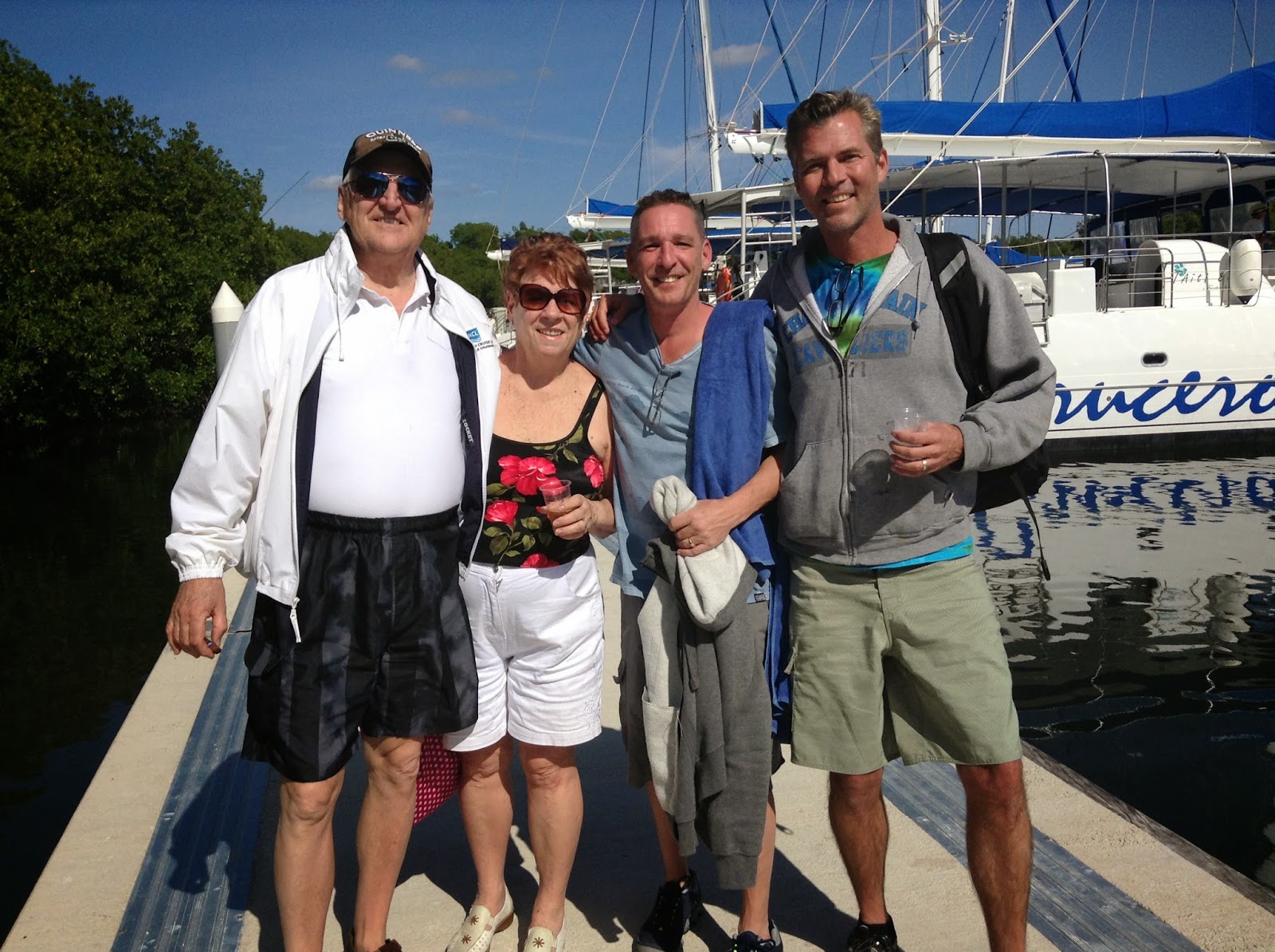 Finally it was time to go back to Varadero and the sky cleared up making it a bit warmer. Needless to say, we were pretty sloshed by the time we got back to the hotel. I had to confirm with the others if I had tipped when we left the boat as I have no recollection of it. Apparently I did $10. 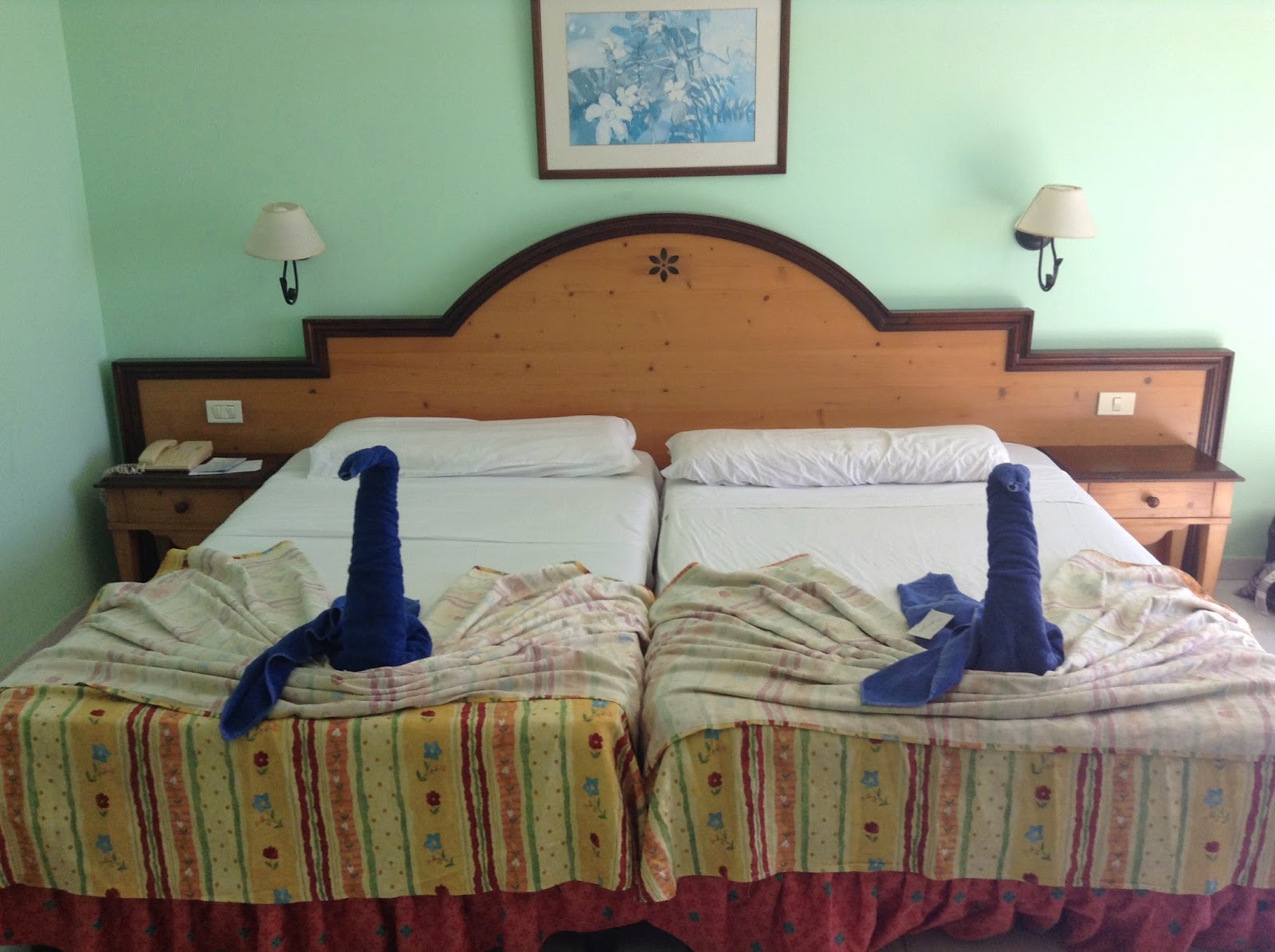 We tipped the maids every day with toiletries. Toiletries are scarce and much appreciated as tips. Each day we left soap, toothpaste, toothbrush and shampoo. Each day, the maid left us a thank you note and towel animals. We had seen complaints about not having toilet paper in the room or not having good towels. Well you just know those people didn't tip. After the first day, we always had an extra roll of toilet paper and the big bath towels. 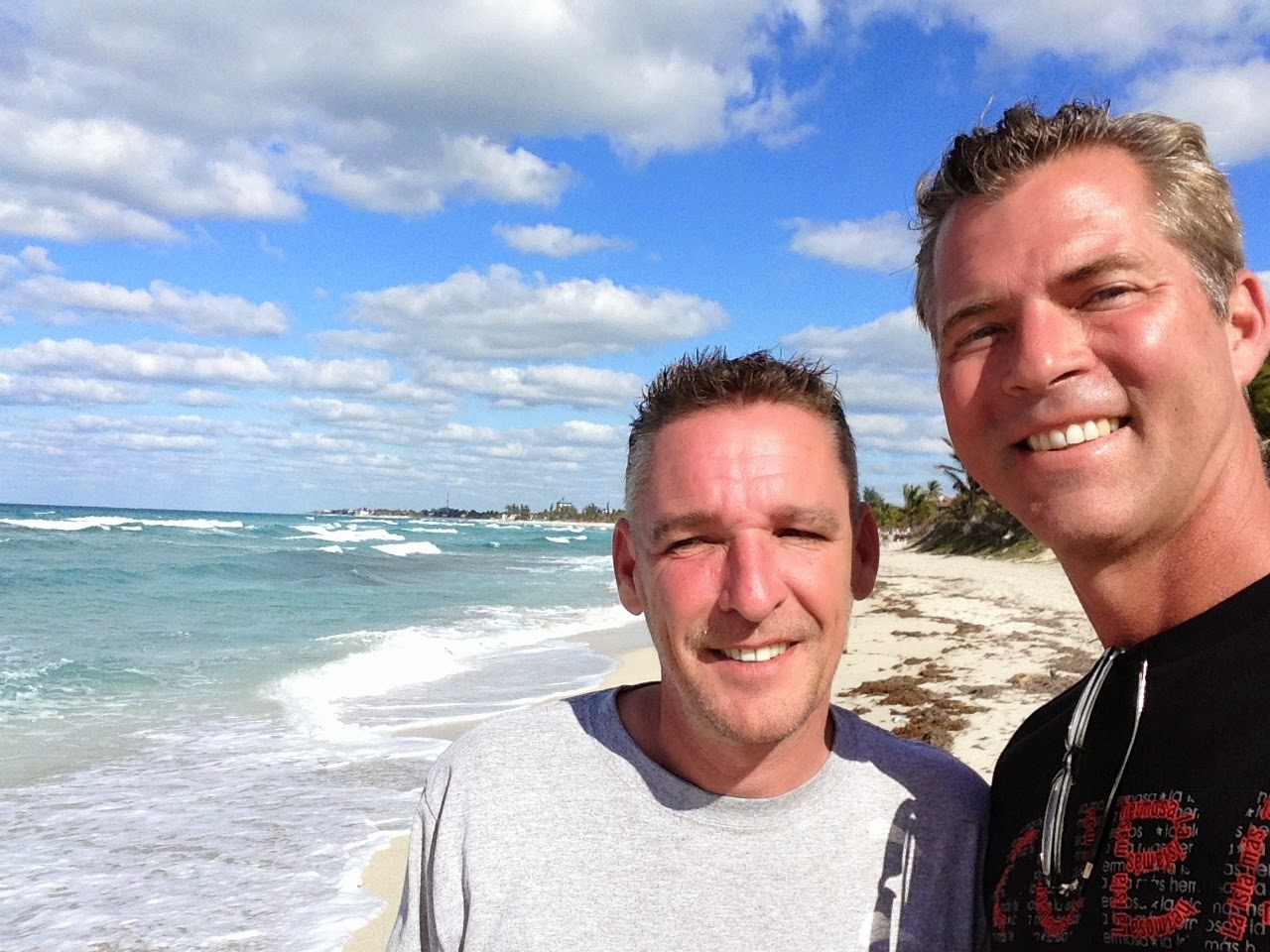 I must say Cuba sure has some splendid beaches and I just kept marvelling at the turquoise waters. 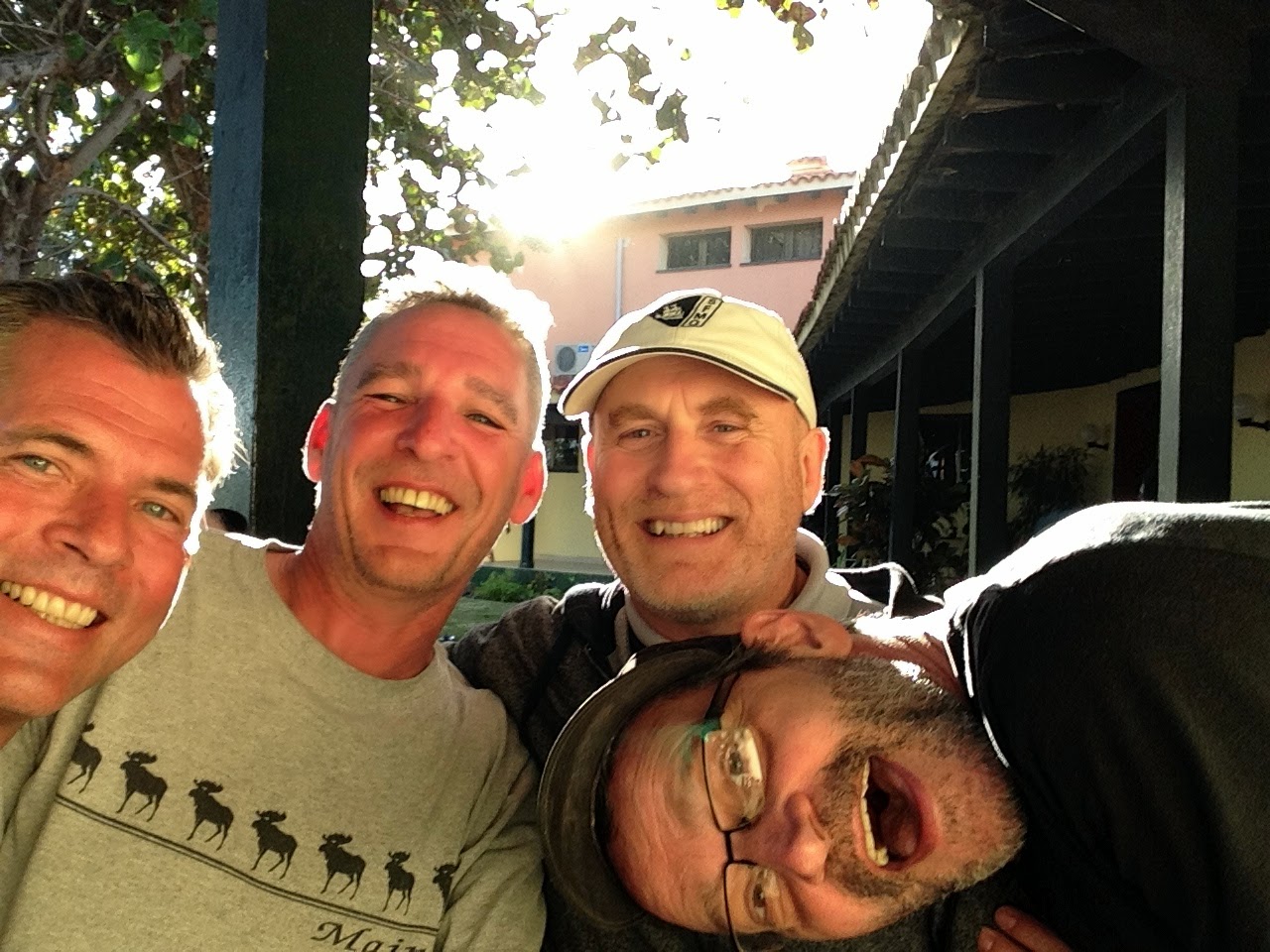 One happy circumstance was getting to hang out with Dany and Martin. We met Dany during our first Cuba trip and have met up a few times since then. When we discovered we would be at the same town at the same time, we set up a couple party times. Once at their hotel and once at ours. 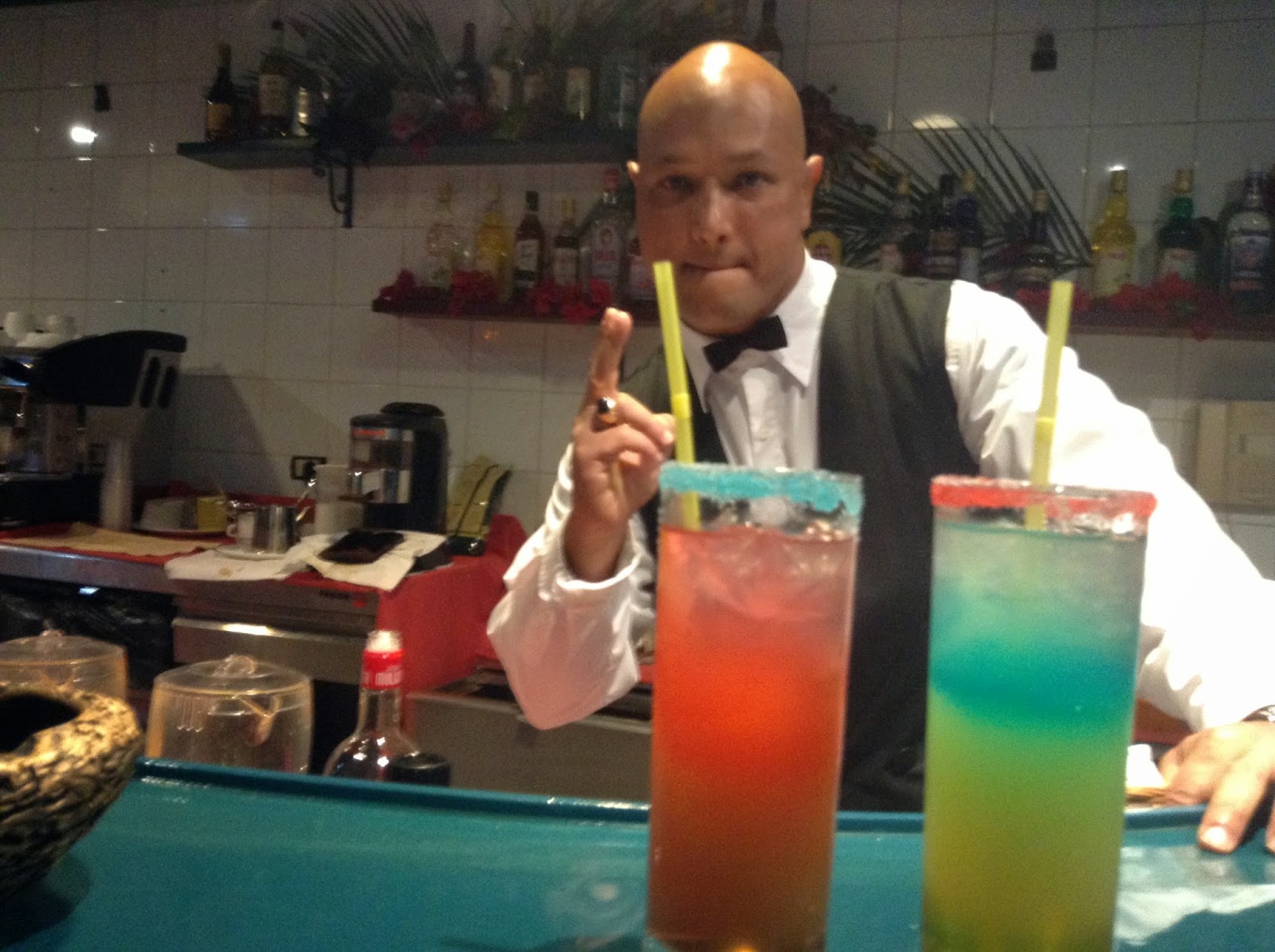 We got to know a lot of the staff because we were consistent tippers. This is Ulyses and he was just great. All the bar staff were great, but the customers? Not so much. We observed so many people who didn't tip. I couldn't believe my eyes as people ordered drink after drink and didn't leave a tip. Ulyses said he thought it was about a 50% tip rate. He said that at the high end resort where he used to work, the rate was more like 20%, confirming my belief that those with money are always the cheapest human beings. Time and again I have observed this. Anyway, the last couple days I donned myself the tip police and started confronting people. 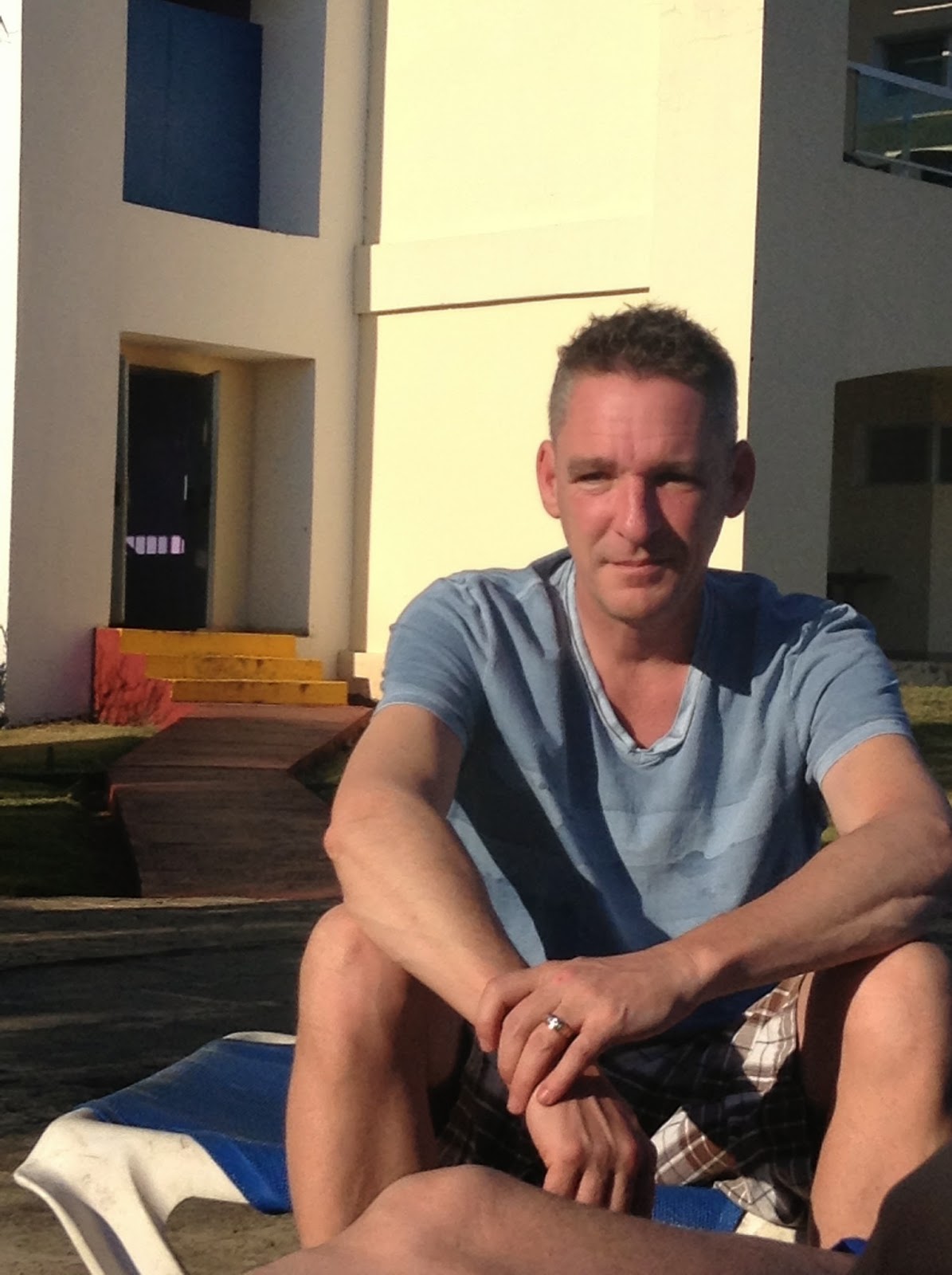 I kept trying to get my beautiful boy to film while I confronted people but he was too shy. I had fun doing it. As the cheapos left the bar with their drinks without tipping, I'd say with a big smile, "Hey, where are you guys from?" The answer was always a Canadian city, Toronto, Saskatoon, Guelph etc. "How long have you been here?" "Are you having a good time?" And then I'd say, "So I noticed that you didn't leave the bartender a tip, did you think the service was bad?" All the while grinning. The people stammered and not one person could come up with a reasonable argument against tipping. I'd ask, "Do you not tip the bartender in Toronto?"  They would assure me they did tip in their city. "Then why wouldn't you tip here? These are not our slaves. Don't worry about it, I'll leave a tip for you." And I did. We were famous with the staff, and I enjoyed shaming these entitled twits. I told Ulyses on the last day that we would be back and he said, "Next time, be nice with the people." I laughed and said, "I will if they tip you guys." It was probably my favorite thing about the vacation. 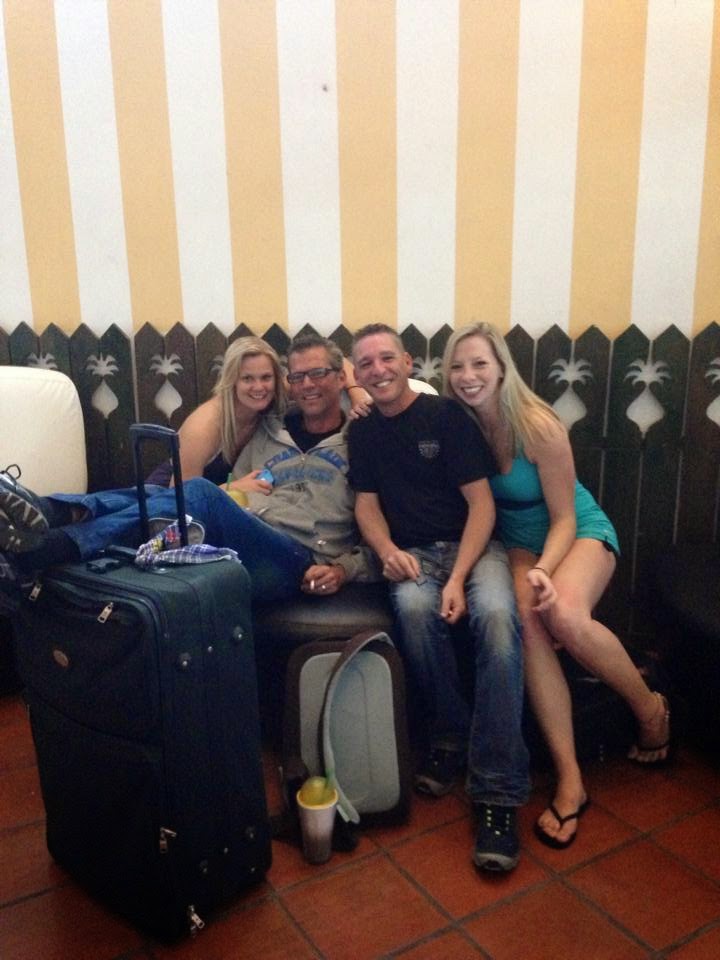 Finally it was time to go back to the icebox. We made friends and hung out with these two beautiful ladies. They dubbed us their honorary dads which made me feel old, but I guess I need to own my age. All in all a wonderful getaway. 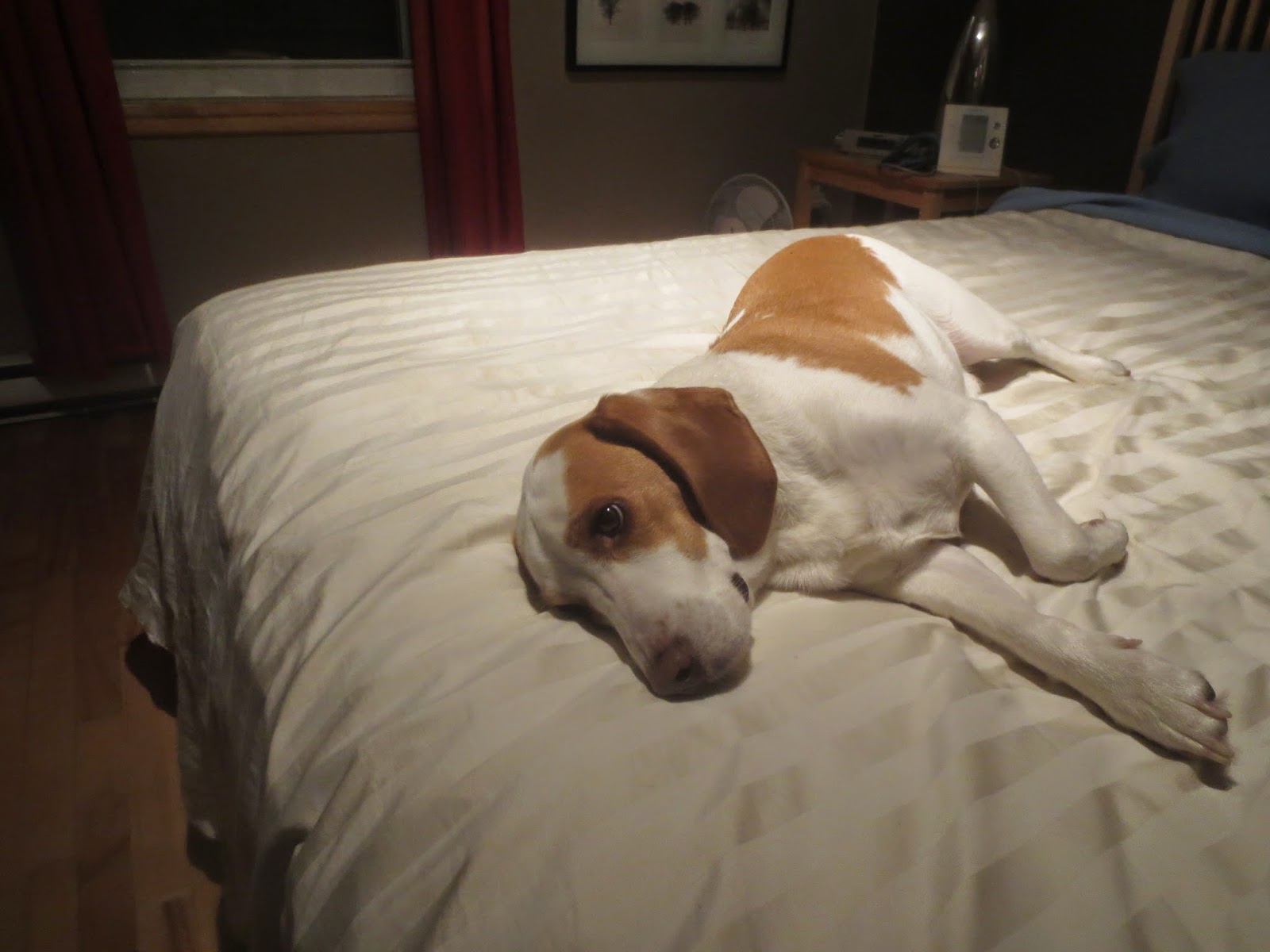 When we brought Georgie home from the kennel, something wasn't right. He got worse and worse until he wouldn't get up and walk. After a visit to the vet and x-ray, it seems likely he has a herniated disc that hasn't ruptured. If it ruptures, there will be paralysis so he has been very drugged out the last two weeks but he is finally showing signs of improvement. There was a lot of crying thinking we might have to put him down. Luckily that seems less and less likely now. 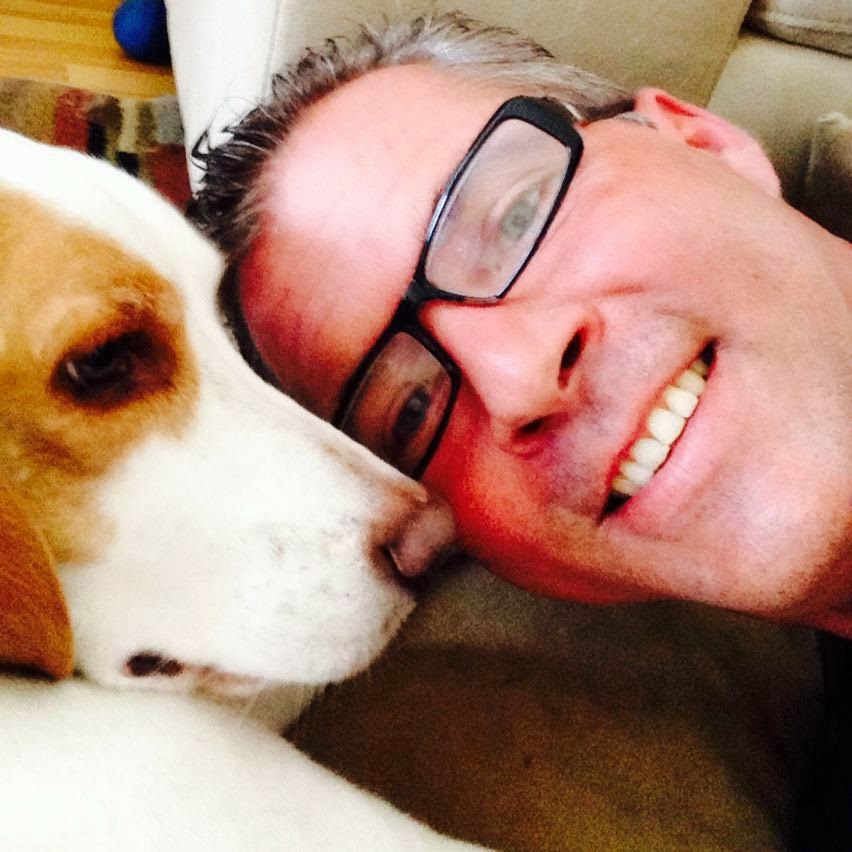 I've been hanging out on the floor with him a lot. The vet said never to let him jump on the furniture again. It will be a tall order once he's fully recovered but we must. I just love the little guy so much.

Lots of other stuff going on as well, but I'll try to catch you up on those things on my next post. Thanks for swinging by! Smooch!
Posted by tornwordo at 10:19 AM 4 comments: