This is probably an overshare

So I recently had a colonoscopy. (My first!) The video is me taking the first of several glasses of what I thought tasted like lemonheads. By the end it was kinda sickening though. You'll be happy to know everything checked out and I don't even have any polyps. The "anasthesia" they gave me didn't work. Seriously, but I didn't care because it doesn't even hurt. Well it sorta does when they blow all kinds of air up there to "puff things up". I watched everything on the monitor. When it was over, they wheeled me into a room where 6 other people were who had just had the same procedure. Some people were pretty out of it, don't know why the stuff didn't do anything to me. Anyway, the nurse instructed me to get all the air out now that they had shot up there. Wut!? You mean, you mean, we are in the farting room? (I did not say out loud.) This delight danced through my head as I let them slip out as noiselessly as possible. I felt bad for the ladies (and stifled giggles) who were surely more uncomfortable about the farting room than I was. Anyway, no cancer and that's all that counts. 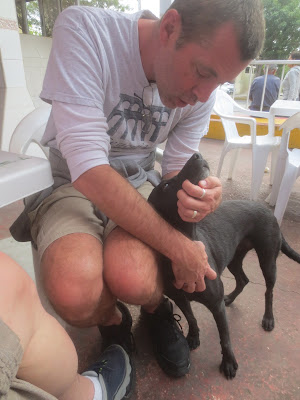 Shorts? What are you talking about? Oh right, we took an impulse trip to Cuba. The dogs just love me. Though I was in shorts, it wasn't very tropical and in the sixties until the last two days. Funny story and I can write about it cuz it's my blog. So Serge and I got pretty tipsy on the plane on the way down and once we all got checked in, Serge went to go get us a nightcap before bed and when he got back, the security guard was in our room with me with his pants down. Serge joined in until his walkie talkie came to life and he ran out. Neither of us remember exactly how he ended up being there. He just kept repeating the whole time. "Me gusto hombres, me gusto hombres." 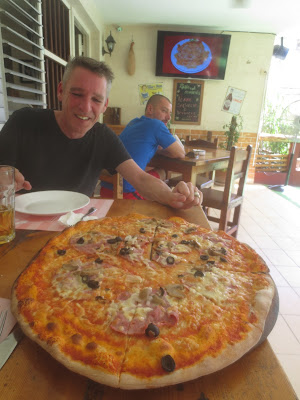 A couple of times during the week I had a hankering for something. First thing was french fries which cost more than hamburgers, make that five times more than hamburgers. Fine, I paid the equivalent of $7 for a plate of them with ketchup drizzled over the top. The last day I wanted pizza. Could it be had here? I asked the representative for our tour company and he asked thick or thin crust, and told us to go to Nonna Tina at calle 34. We walked down there and waited about half an hour for a table at two in the afternoon. OMG it was so good. The pizza was just like it is in Italy. It was huge, look at it! We couldn't finish it. Pizza was $13CUC or $13 USD. I thanked the representative after and asked how it was so good. He said the owner is Italian. I said, "How is that possible?" And he replied simply, "Things are changing here." When I tell people here that I had amazing Italian food in Cuba, they don't believe me. 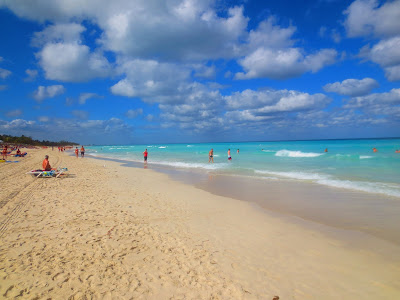 The last couple days were nicer and we got some rays. The best thing about the trip was all the friends we made. Last year we were with the in-laws so it was different. The open bar helps. We should probably spend less than a week in an open bar situation. I have blackmail video of Serge one afternoon, he really was lit and surrounded by a bunch of people carrying on and on. I had just woken from a nap. When I got home and prepared my taxes and realized I owe five grand this year, ugh, we probably shouldn't have gone. It was a nice break from the winter though. 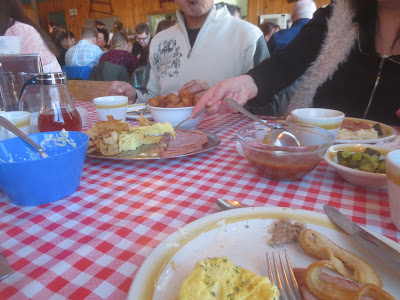 A couple weeks ago we went out to visit our friends and went to a sugar shack. I stuffed myself silly and man did it ache for several hours after. I have been following a reduced calorie diet to take off the holiday pounds, so my stomach had probably shrunk. I reached my goal weight but am still not overeating as summer is coming. Swimming may happen. 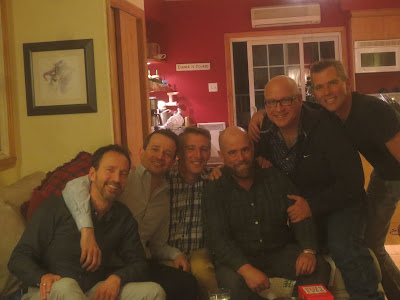 This is the only duplicate photo to ones I have posted to facebook. Our big gay game night was the night before easter (I am calendar challenged) so only six of us but wow, what fun until 2:30am. It has been a long time since I have done that. We played Never Have I Ever which you can buy now and you really can be surprised by people. Buck "won" which kinda translated to had the most dirty laundry. I never would have guessed he would win.

Okay then, I am really joyous about the impending springtime warmth and growth. Sure, we still have another cold snap to get through but surely it will be the last with snow. And now to bring things full circle here go read this list of horrible poop happenings. I cried laughing naturally. Here and here.
Posted by tornwordo at 3:01 PM 3 comments: