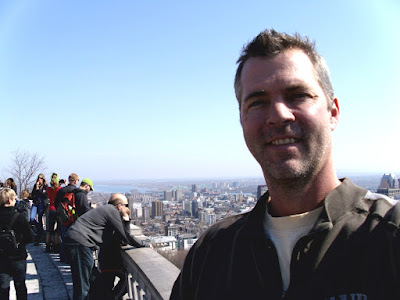 I'm still here! This pic was taken when we had that freak heat wave a couple weeks ago and broke the all time record high for March (80 degrees). Serge and I took the top down and drove up our little mountain in the middle of the city to have a look around. This particular day was the beginning of the heat wave and it got up to about 66. It was also the St-Patrick's day parade day. I can remember freezing my (I want to say tukus but don't know how to spell it) nards off at that parade once when it was 16 degrees and windy. Of course everything has gone back to normal since then with highs in the 40's. At least the snow has all gone. We may have a few flurries before it's all said and done, but doubt we'll see any accumulations.

See this is why I rarely blog. Talking about the weather, yawn. As usual, I've been super busy working every day all day and then working on my homework and lesson prep on the weekend. It just feels like I never have a day off just for me. I started reading the Hunger Games and then every down moment I had, I was glued to my little ipod touch (Kindle application) reading the three books in succession. I hate reading novels written in the present tense, but the story was compelling nonetheless, and I finished them in about a week. Then I dragged Serge to go see the movie, which he liked a lot. I thought the movie was better than the book because we didn't have to hear Katniss' constant, "I don't know how I feel," ruminations throughout the story.

As I was reading, I couldn't help thinking it was a metaphor for the world in which we live. There are those who contribute nothing to society, manipulating large sums of money to get richer, while the rest of us are essentially slaves, working our whole lives to stay alive. Sure we agree to the slavery since there is compensation, but, oh you know, the whole 99% thing.

They called me for that cooking show again and I went in for an on-camera interview. Ugh, just that was stressful. I kind of hope they don't pick me because I don't want to be stressed out for a week. Still, the possibility of winning two grand would be nice. I'm practicing my meal for the in-laws for Easter today. Maybe I'll instagram/facebook a pic or two. 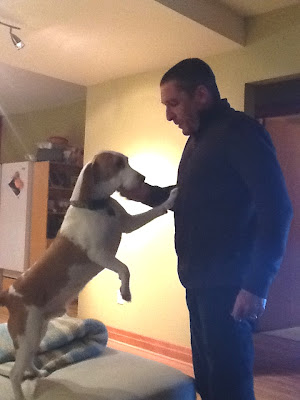 Serge has been smoke-free for almost five months now. Awesome! Here you see Georgie asking for his evening walk. He loves his routine and makes sure we don't deviate from it.

Planned a couple of upcoming trips. First Washington DC, where we will finally get to meet Steven! I'm so excited to get to share boozy good times with him. It's gonna be a blast. Plus I got a great deal again bidding for a hotel on Priceline. $70 a night for the Marriot Residence Inn. Free internet! Free breakfast! Two blocks from the metro! And they have the bike sharing system from Montreal. I haven't been since I was a teen, so I'm excited and Serge has never been.

Next will be New York in August with the family. Then I'm hoping for a Vegas junket and finally a weekend in Provincetown before school/work goes back into high gear. I'm working full time this summer so when that contract is up in August, I'm going to party hard.

There's more I'm sure, always more, but you've been kind enough to read this far, so I'll let you go. See you next month if not sooner! Mouah!
Posted by tornwordo at 8:57 AM 10 comments: