It's Gonna Be a Great Year!

I have never felt this way about the changing of the calendar year. Part of it is because the last two years have been wretched on many different levels with multiple players fucking with our serenity. So how can this be a bad year comparably? I shouldn't tempt fate with that rhetorical question. (I swear Universe, it was rhetorical.) Also, many of the bad things going on are showing improvement or not causing the pain and hurt they once did. Sure I am being a bit cryptic, deal with it. I can say that our disastrous investment into the Tampa rental unit market is FINALLY turning around and after 8 months of no revenue and negative cash flow, the units are finally generating a positive cash flow. I hate to even say it because I have this superstitious jinxing fear. But that fear is unreasonable, as most fears are.

I've also made the oddest resolution I have ever made, and that is never to communicate with two unnamed people again. We were once all the best of friends but it's not bad enough that our friendship is terminated. We recently learned that they are actively campaigning our mutual acquaintances/friends to block me on FB and doing so by telling lies about me (apparently I am psychotic, who knew?) We thought they couldn't hurt us any more, but this disappointing discovery did, and just shows that they were never really our friends in the first place. I contemplated waging war, but really don't want to waste any more energy on human sewage. Hence the resolution. I rarely make new year's resolutions, but when I do, I have always succeeded.

Serge and I have also been discussing making changes to our life, a sort of ACT III if you will. We are both working and doing what we like, but we should be earning more and we certainly have the talent to do so. I am turning 50 this year so maybe that is playing a role. ACT I was the hotel/restaurant management career. ACT II as educator has been great practice for whatever ACT III will bring. So I am actively sending my CV out and going to work with Serge on his CV. We also want to sell our building (we haven't found a buyer the last two years, but I have this feeling that the third time is the charm) and price it to sell so that we can have mobility should we need to move to another part of North America. Everywhere is on the table. My goal, six figure salary within five years. Wish me luck.

Okay so I haven't been around here for a while. If you are my friend on FB, then you have seen probably more than you ever want to know about our lives. Still, I know at least one of you (Hi Rox) is not on FB, so I will do a quick skinny on what's happened since my last post. Wow, over two months ago.

Winter arrived in November and we have had snow on the ground since before American Thanksgiving. Thanksgiving was a real treat for me this year as I had blocked time off so we could celebrate in the states with friends. 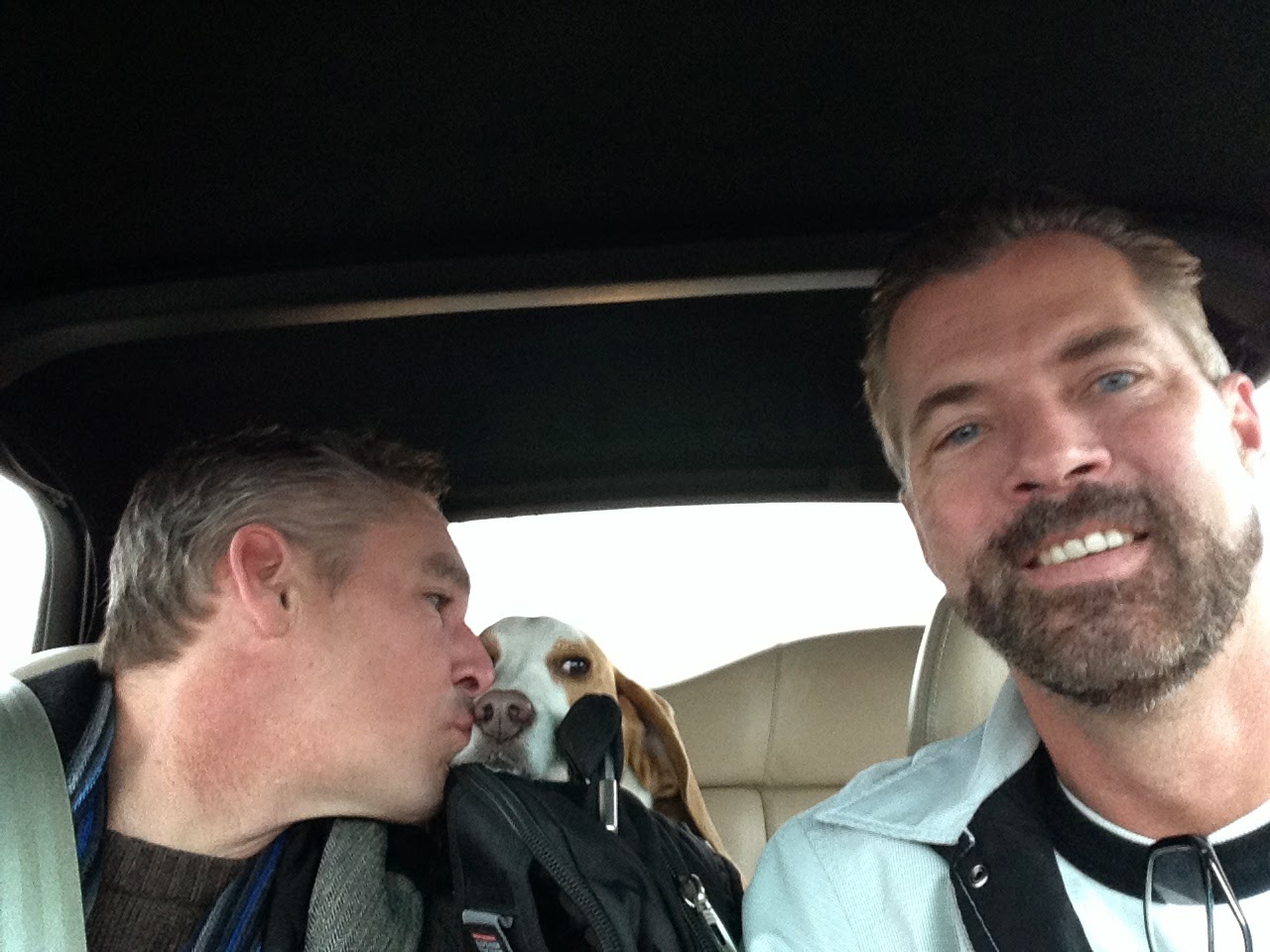 We even took Georgie with us. I made sure we had all the necessary papers to cross the border with him and of course the agents never asked to see any of them. He was a pretty good passenger. 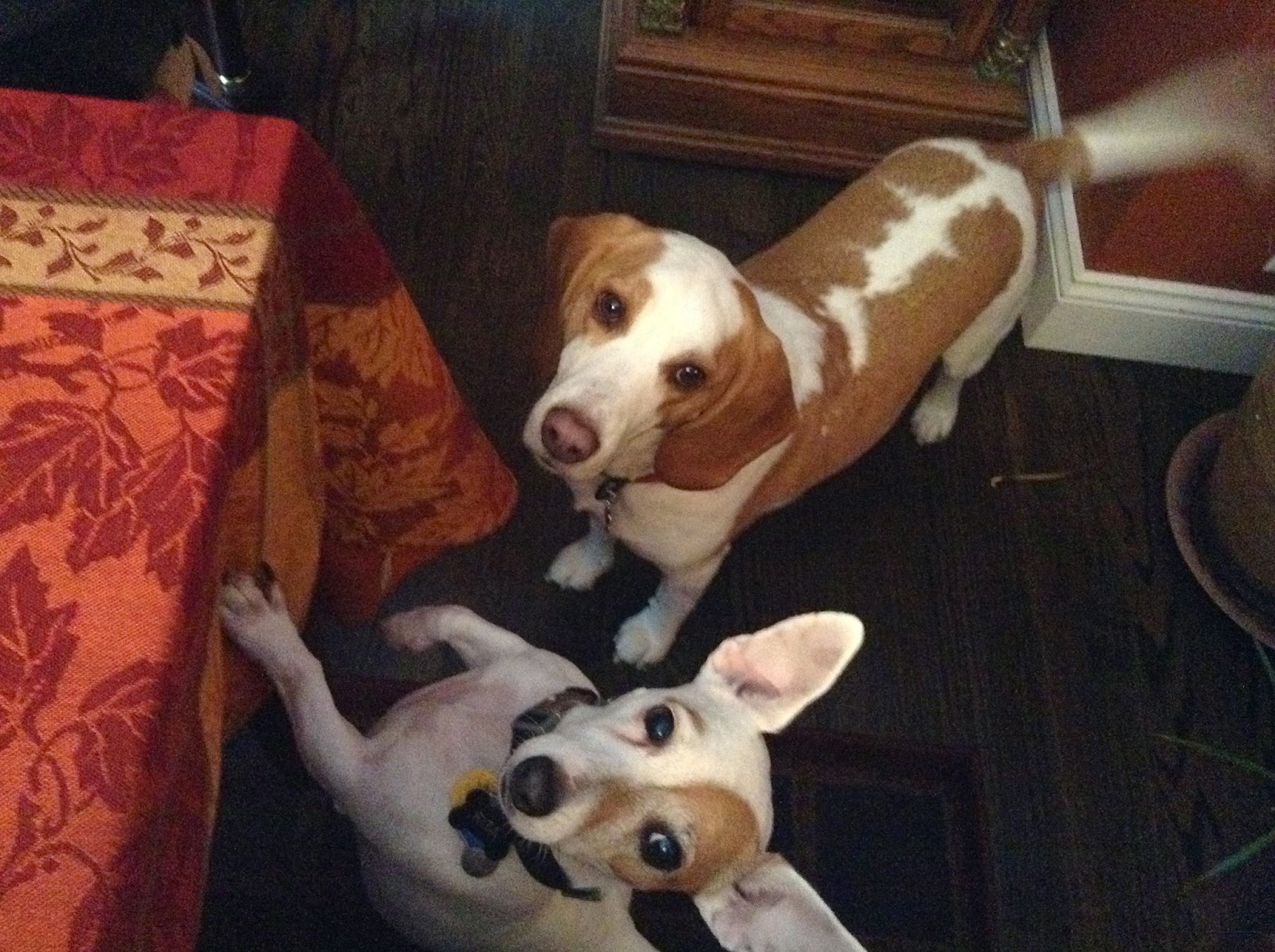 Our first stop was Breen Acres where Rita immediately claimed George as her boyfriend. We were 9 gay men for Thanksgiving dinner and afterward we played Hollywood Game Night which was great fun. I now own it. It was $49.99 on Amazon.ca (regular price $105) but it was $11.50 on Amazon.com. So I bought it while I was in the states over Christmas. Target just announced they are leaving Canada. They lost 6 billion dollars in two years. But it wasn't the same as in the states. Higher prices and much smaller selection of merchandise. I went in several times and never bought anything. 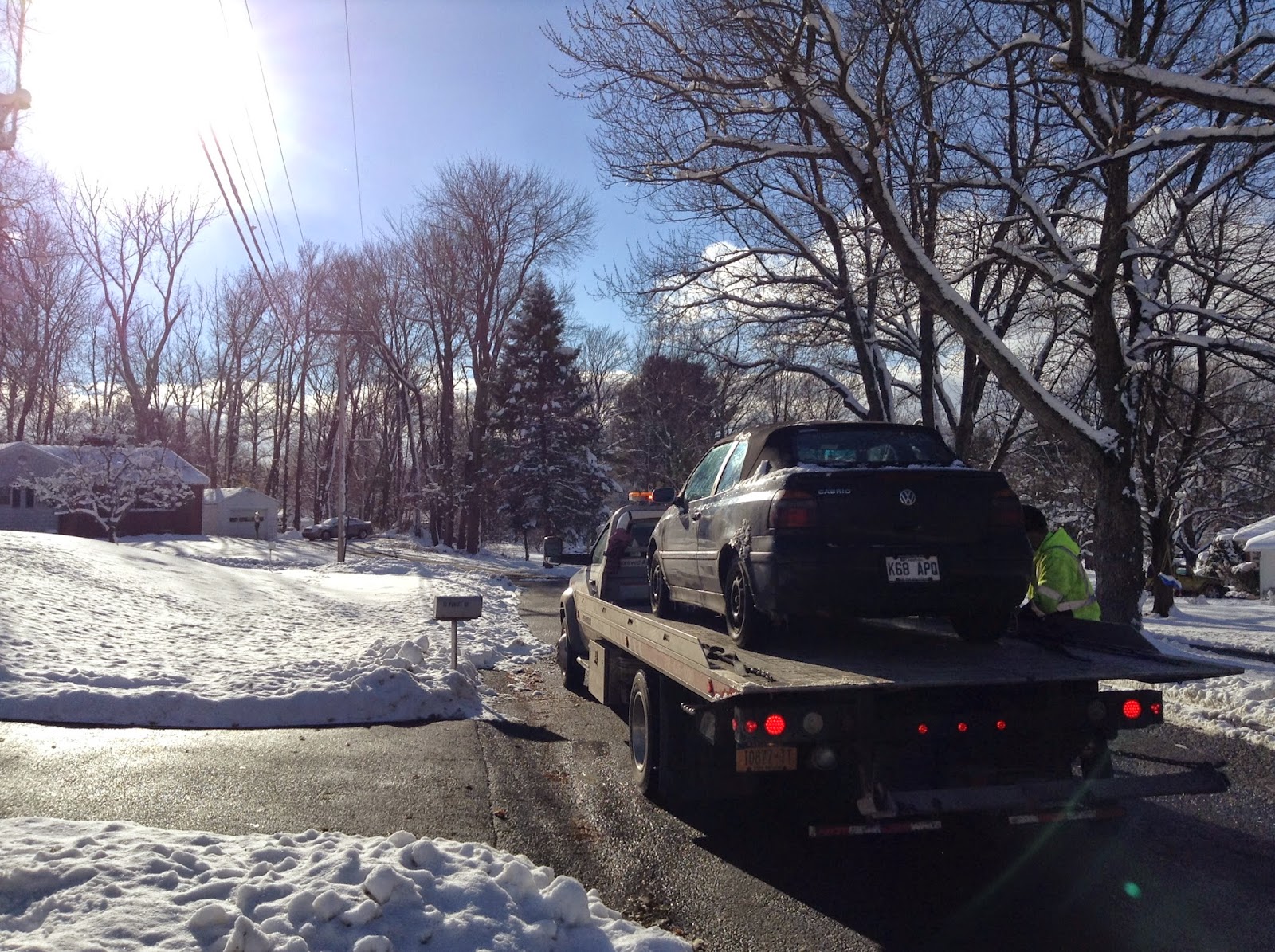 We tried to leave on Black Friday to visit our friends at Jellystone Inn (because they think of themselves as Yogi and Boo-boo, lol) but our car SCREAMED at us in a very STOP THE CAR RIGHT NOW way. Seriously, it was a ridiculously loud alarm while the oil light blinked. Yeah, oil pouring out of the engine. It took many hours to find someone to diagnose the problem, and we learned that the car wouldn't be ready for four days. Stranded, but we rented a car so we could go see our other friends anyway. 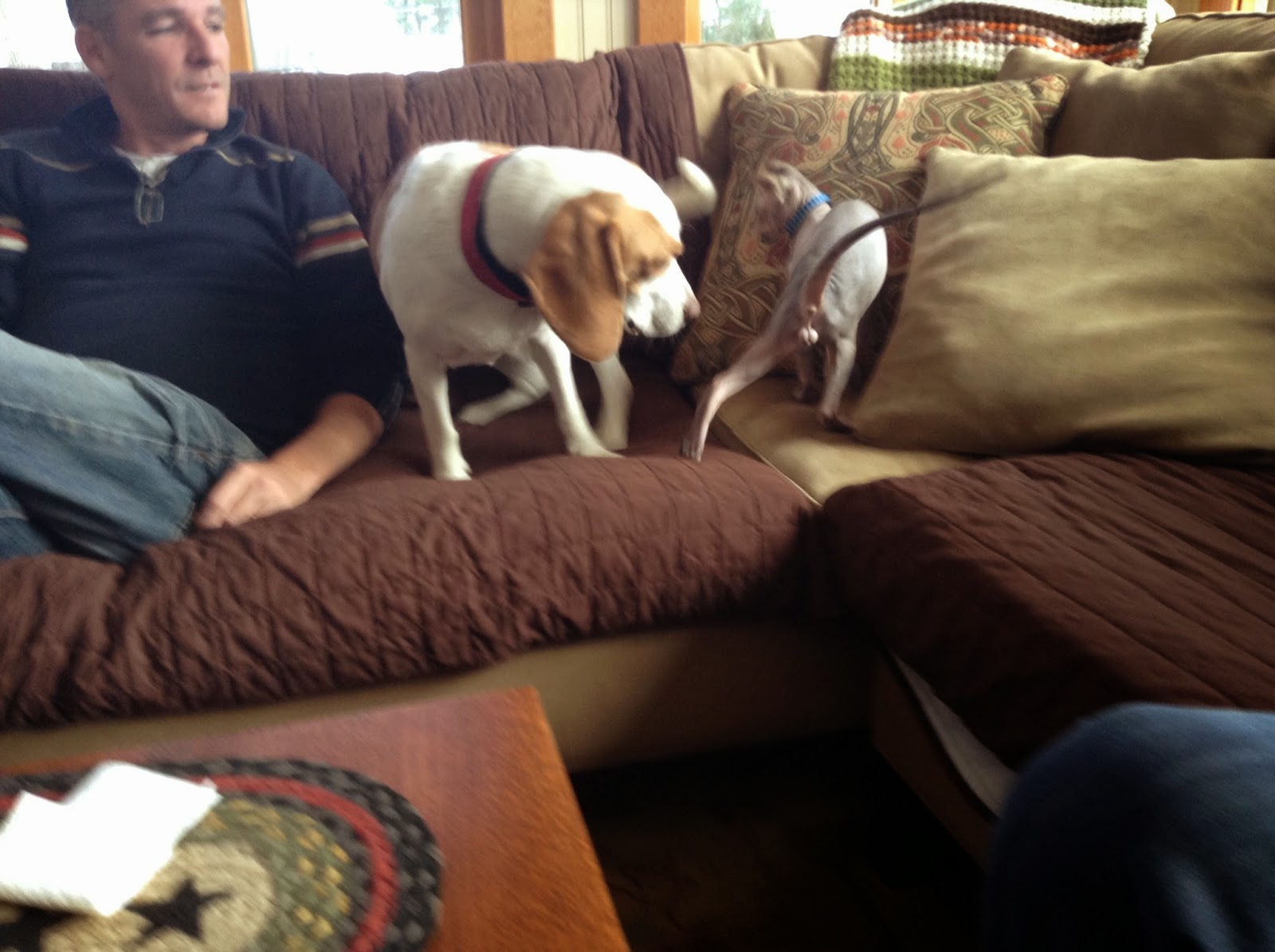 Georgie is afraid of cats but this cat is one of the friendliest I've ever met. Maybe because he's cold since he has no hair and wants to be close to a warm body. It took George a while to get used to him, but by the third morning they were curled up sleeping together. So cute. We were treated to magic rice krispy treats too. Did you know mixing in fruity pebbles tastes great and makes them multi-color? So cool but I do not have a picture. We ended up getting stranded an extra day as there was a mix-up for the car parts. And we missed Book of Mormon, tickets I had purchased for the Montreal show. I was really bummed. We resolved that we will simply rent a car for all future road trips. This is the second major car issue that has happened on a road trip. Remember last year when I drove five hours with no brakes of any kind? Yeah, that was memorable. 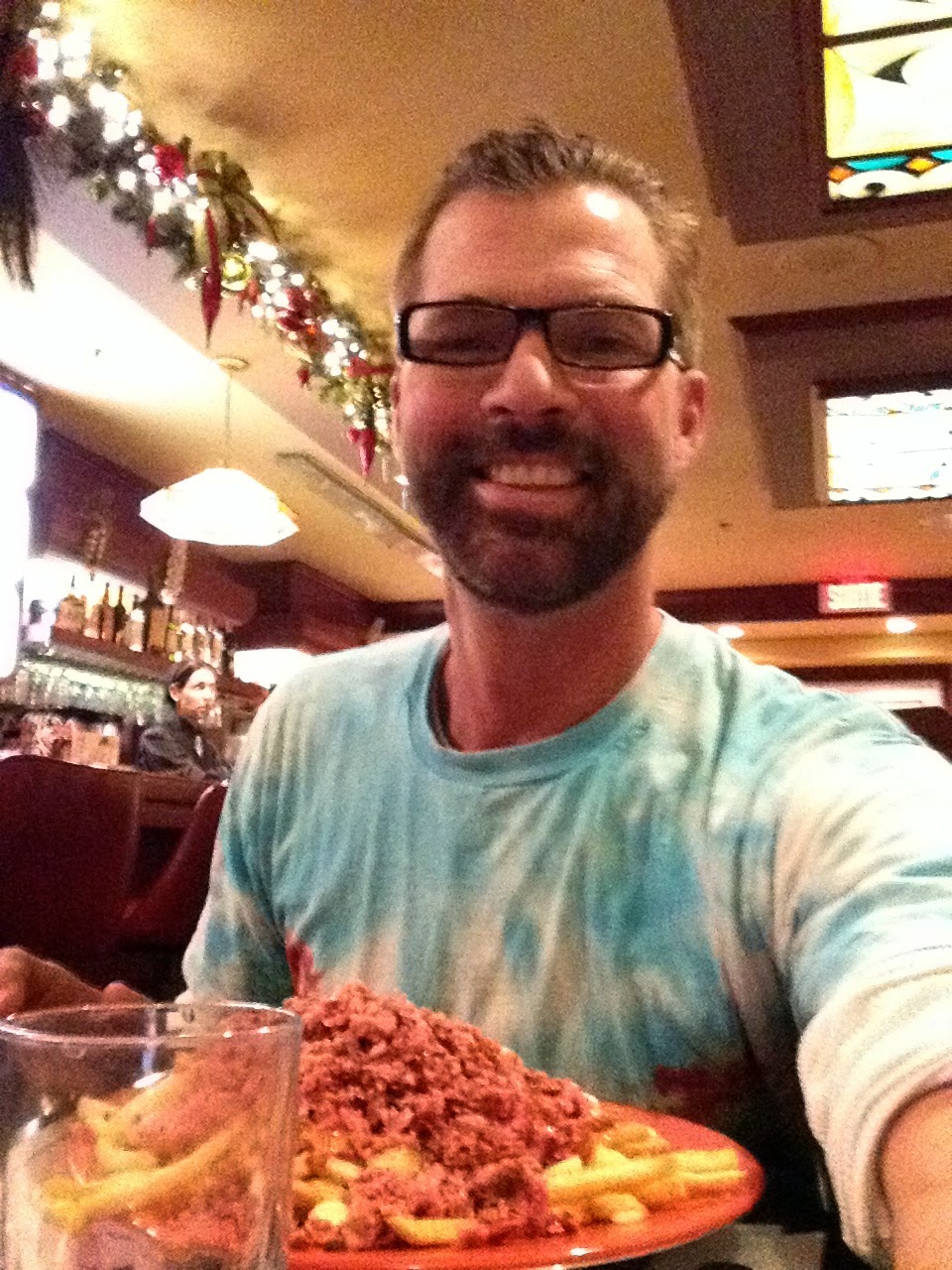 Later in December, my brother paid us a visit. He fell in love with our poutine and ate six during his visit. It is a wonderful thing and it is difficult to understand how it hasn't taken over North America. We had fun exploring the city and discovering some wonderful watering holes. My only disappointment was that I was so excited about going to the slide park (biggest in North America) and then the morning we were slated to go, I was overruled by them. Too cold, they said. Too turbulent, they whined. Pussies. 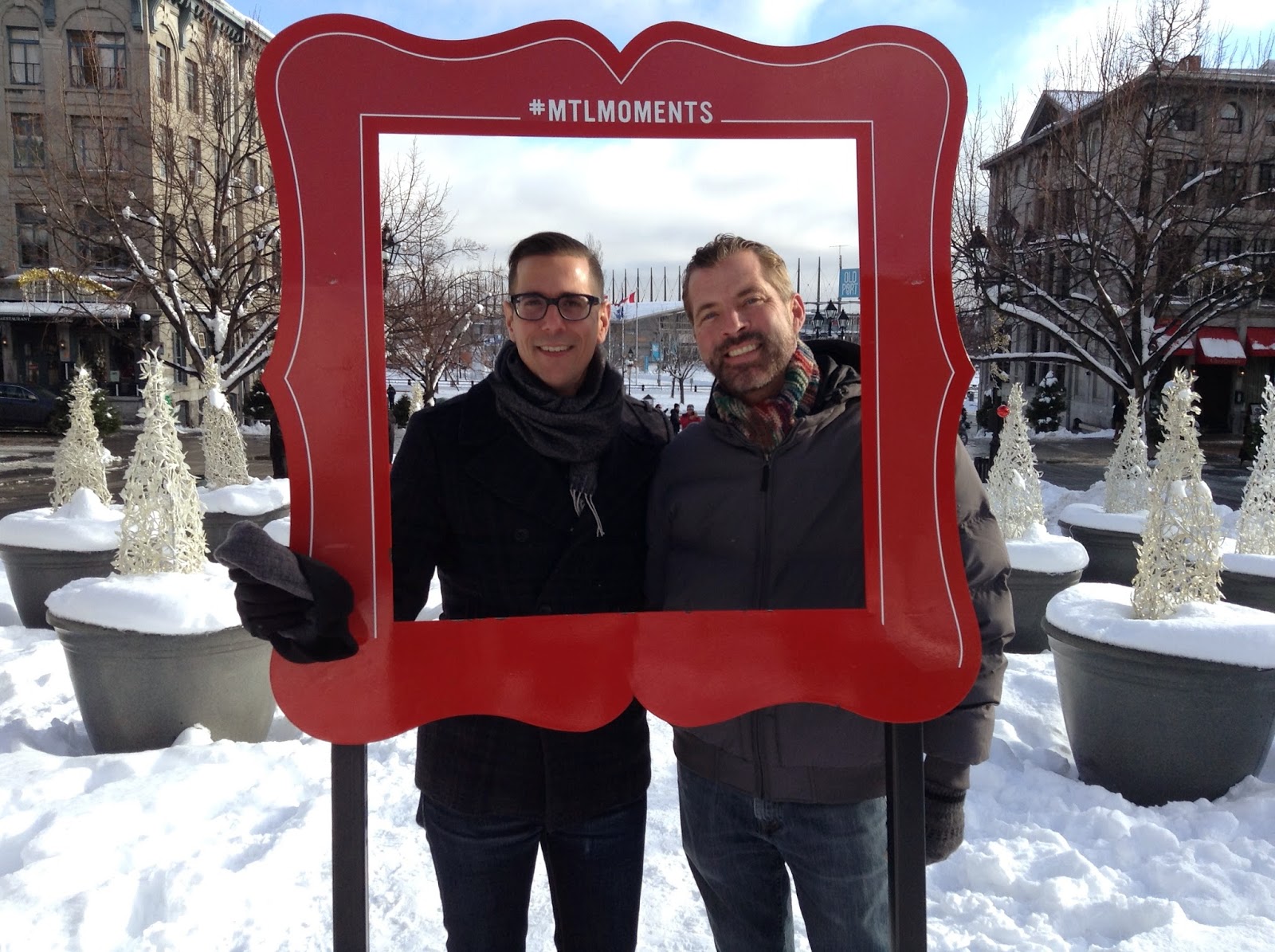 So we walked around the old part of the city and took pictures. It would have been the perfect slide park day, but the important thing was getting to hang out together. One week later we would meet up in Seattle for Christmas week. Serge wasn't able to join us this year but we started the week off right meeting my brother and his girlfriend at the Fairmount for a late lunch. What you can't tell from this picture as I wanted it to turn out good, is that my brother is sticking his finger forcedly into my closed sphincter. Very unnerving. 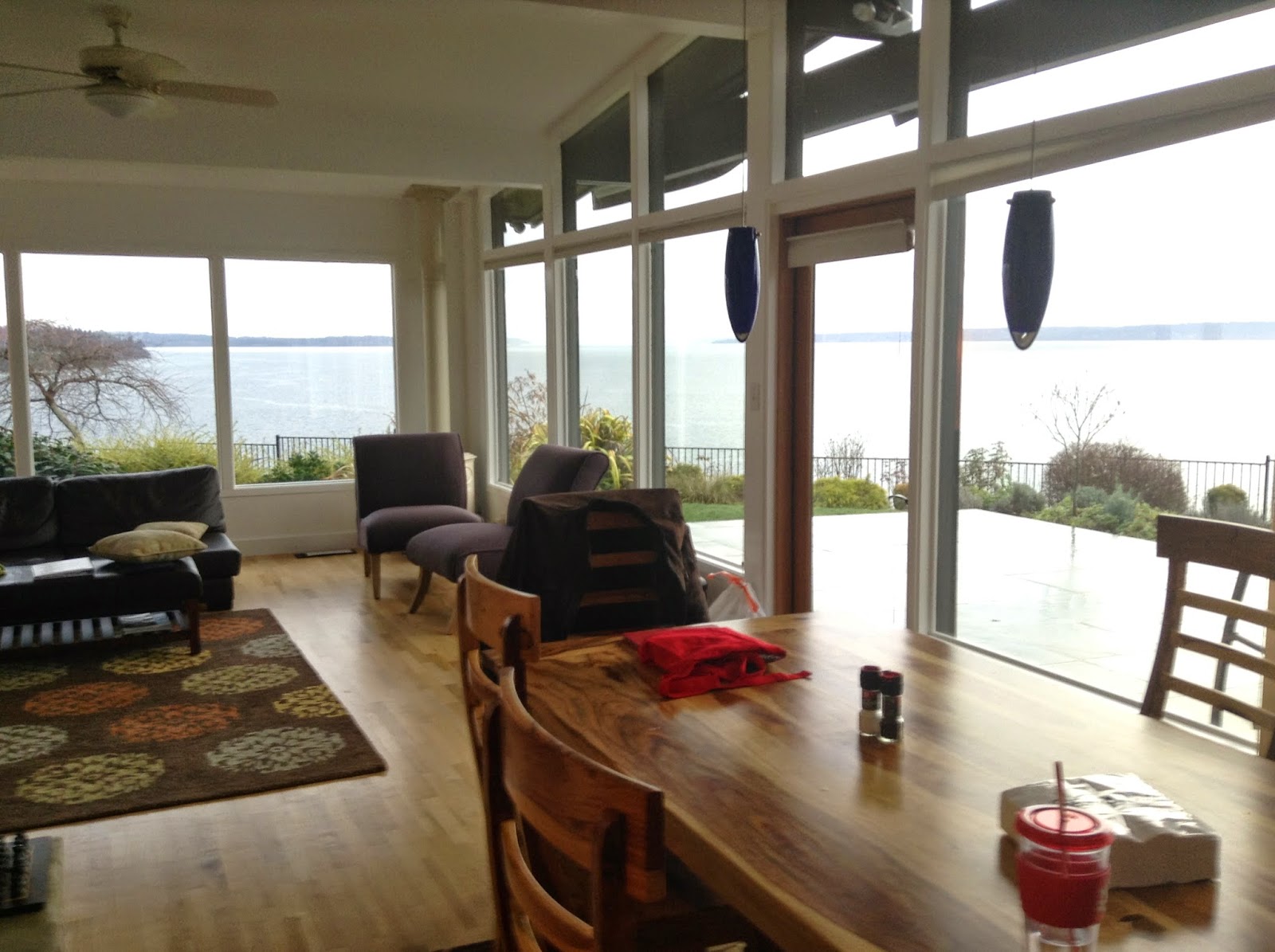 The parents rented an amazing house on Bainbridge Island. We had a great week dining out and playing Hearts every night. The brother and I were in fart competition at all times, much to the unamusement of the others.We laughed our asses off at Bad Santa. I got a really bad cold just before Christmas and I probably shouldn't have gone to the party, but I did and invariably infected others. 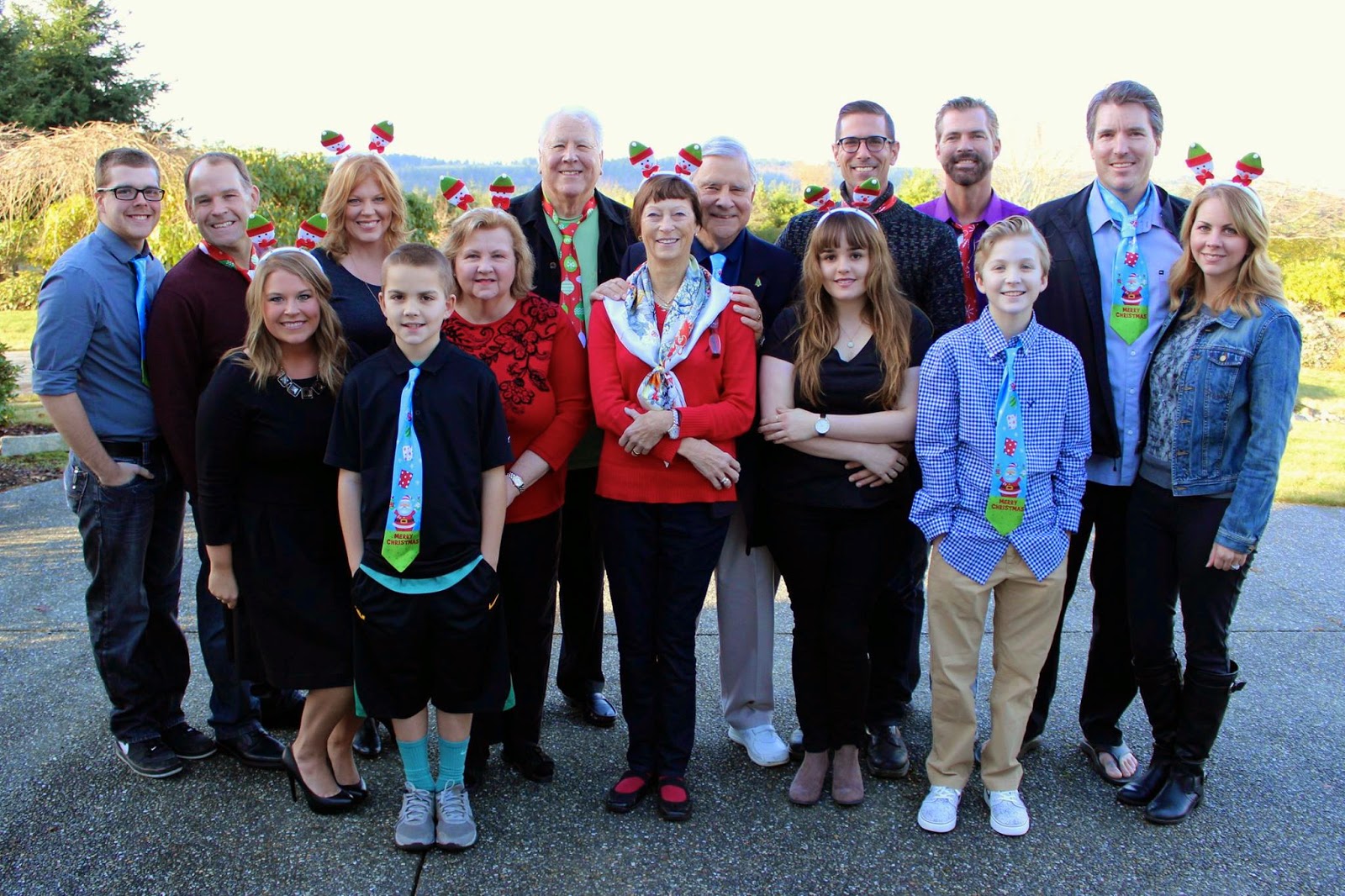 I think we got the best family photo this year. Everyone looks just great. Too bad Serge couldn't come too. We had some good eatin! 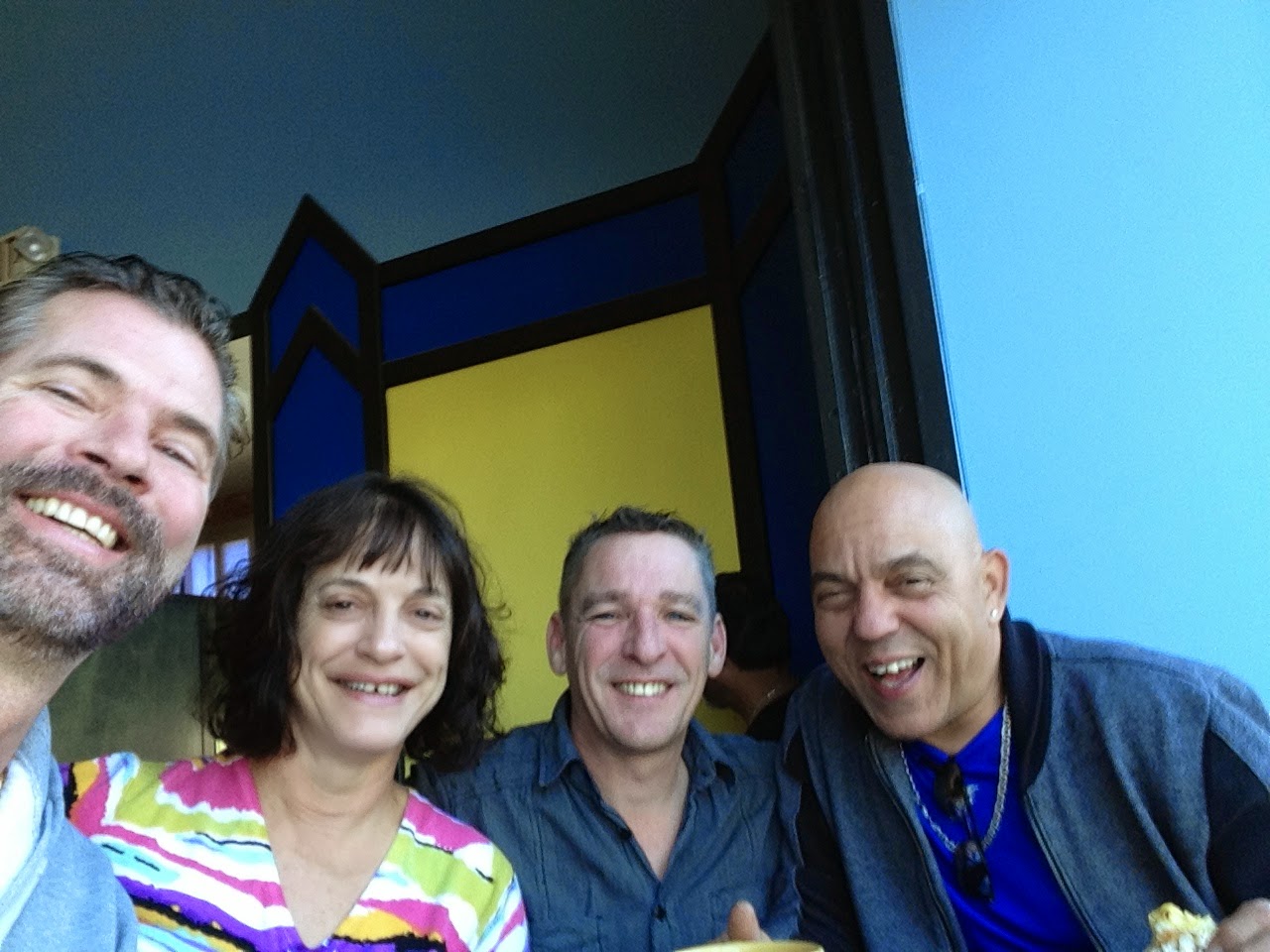 After Christmas, Serge joined me in Southern California where we visited with friends and family. Champagne figured highly on this trip, I think we had champagne or mimosas every day that week. 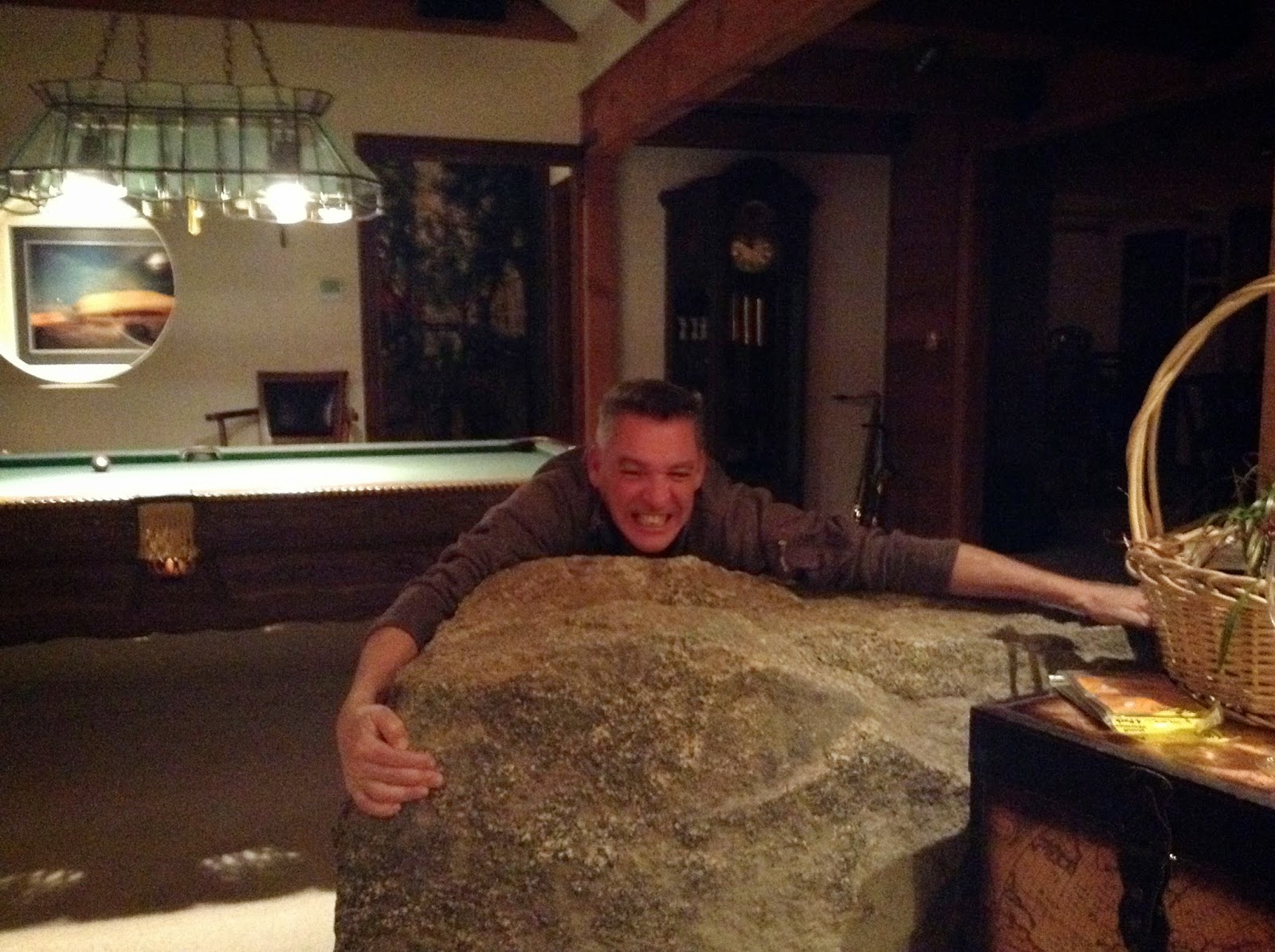 We also visited our friend's beautiful home in Tehachapi, CA. They have a big rock in their house. It's very cool. We had one of the most awkward moments of our life when I pondered why someone would block me on FB to our friend. So she called the person in question to find out why. It didn't take long for the person to sing like a canary. Then she told us what was said and as the words came out of her mouth, you should have seen the look on Serge's and my face. Slack-jawed doesn't begin to describe it. What I liked was when our friend said that we would always be friends despite our falling out with the unnamed persons.


The big 3 Kings party was rather small this year but it turned out to be quite fun. Plus, Serge won the jackpot for the gateau des rois. Yay, money. My favorite clue in this video is "dung" when trying to get someone to guess "beetle". 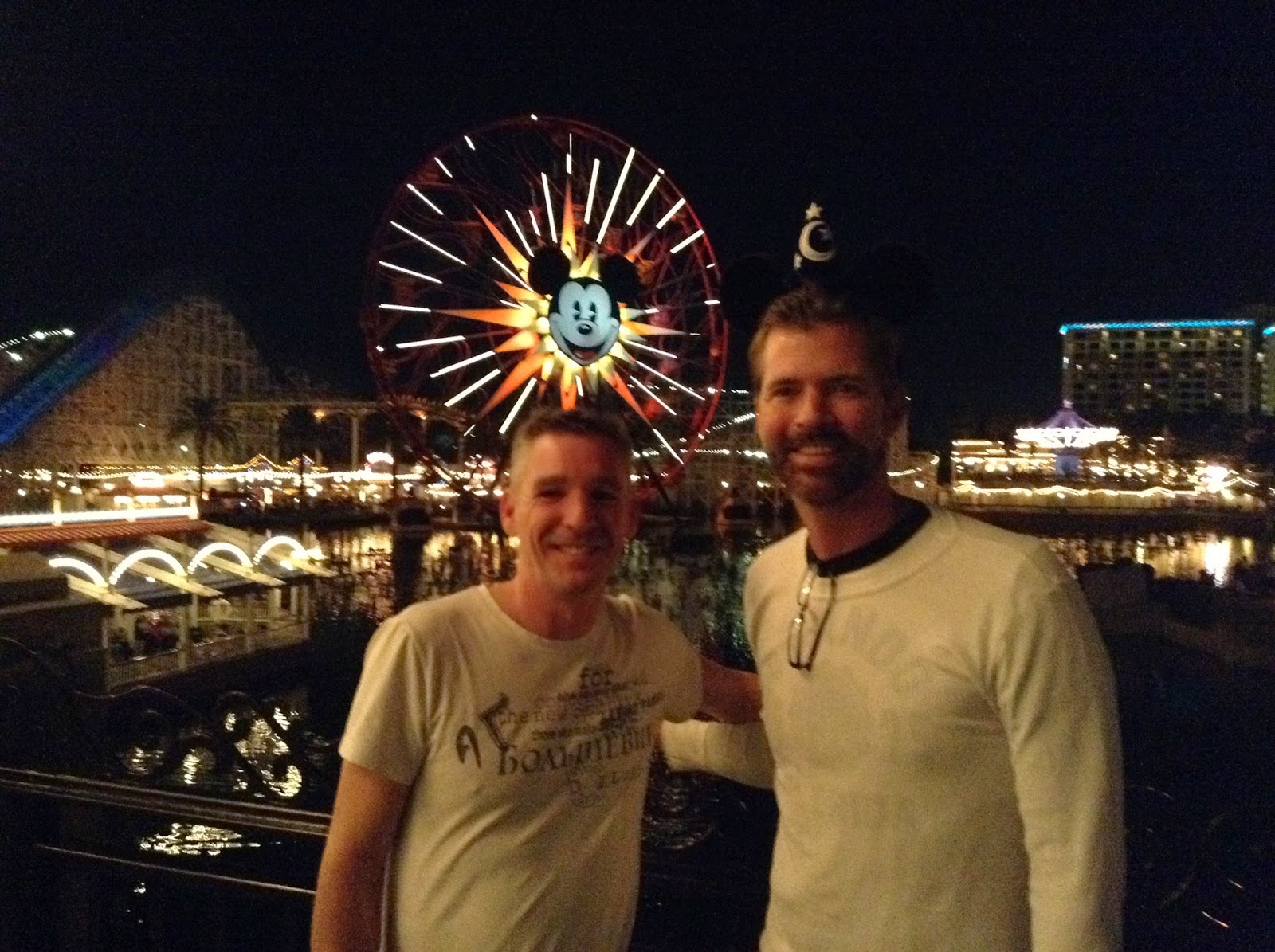 Mom treated us to a day at Disneyland to cap off the trip. It was stupid crowded though and we only managed to go on 4 rides. The tower of terror ride is the best thing ever. I just laughed the entire time.

Okay, I think we are all caught up now. Winter is doing its usual suckiness and after 14 years I am finally on board with maybe trying to live somewhere where it isn't an ice box for 7 months a year. Did I mention that 2015 is going to be an awesome year? YAY! Thanks for stopping by.
Posted by tornwordo at 5:08 PM 10 comments: