My but our times have been interesting

Greetings reader and thanks for stopping by. (A plural seems presumptuous.) First, let me apologize for another long absence. It's not for lack of things happening, but the sheer volume of happenings left little time for blogging. (I'm writing this in the office of my new home in the country. But we will get to that.) 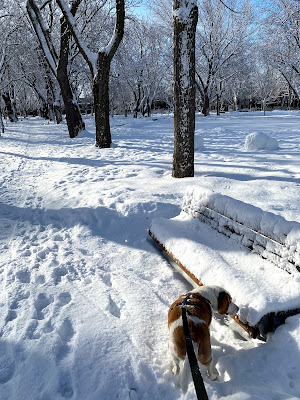 Walking with George through the park after returning from Ecuador.

Let's see now, where did I leave off. Oh yes, Ecuador. When we got home we continued Spanish lessons with our teacher until the end of May. (We hope to start that up again in August.) It was solidly winter upon our return and we were resigned to the filthy cold. Soon after, our real estate agent called, the market was hot, would we like to give selling our building another try. Yes, we said, but we've hired a mason to finish all the brick and mortar repairs to the building during the spring so we want to list it higher than last time. At the same time, we had decided to sell our last property in Florida, the market there too, was hot and we were so very tired of the anxiety throughout hurricane season. Within a week we had three offers over asking. We accepted the all-cash offer 25k above asking (and nearly three times what we paid for it in 2013) and were to close within two weeks. Things were looking up! 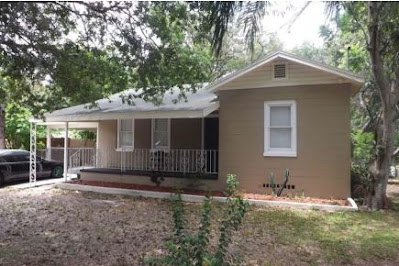 Our little rental house in Tampa surrounded by hurricane-vulnerable trees.

The next week, both Serge and I got summoned to pick up registered letters at the post office. During the pandemic, the government passed a law essentially banning short-term rentals unless you get a (difficult to impossible to get) license from the consumer protection agency. So we got busted for doing Airbnb without a permit. Luckily, we had never applied for a permit since I knew it would have been denied. If we had applied, our fines would have been double. As it was, we had to pony up $7500 and immediately stop renting for less than 31 days. Serge pleaded not guilty and asked for proof and they sent a huge file with all the incriminating evidence - they had done their homework well and there was no doubt about Serge's guilt. I knew I was guilty so I just paid it right away. Still, it stung. Plus, no more extra revenue from those units. Selling seemed like a better idea every day. Except. Where would we go? 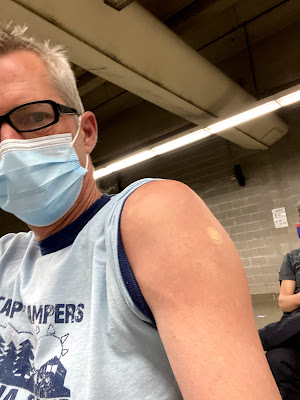 Getting my first dose of Astra Zeneca at the Olympic Stadium.
The day after they announced that 55-year-olds could get the vaccine, Serge and I got our first dose of the Astra-Zeneca vaccine. Sadly, our second dose was scheduled sixteen weeks later at the end of July. Then luckily, because of the increased supply of vaccines, we were able to get our second dose at the beginning of June right before our life changed. 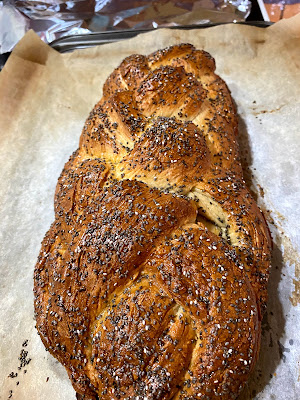 I learned to make Challah bread at a virual cooking class with Campcamp. 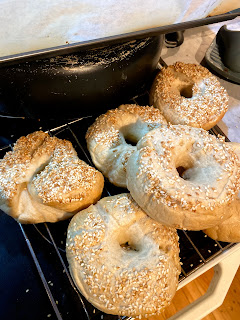 More importantly, I learned how to make bagels and although it took me a
few efforts to get it just right, we now have them every week.

Three days before closing in Florida, I got an email from the Florida real estate agent. There's been a wrench thrown into things, and it seems I need to solve the problem with the permit. If I need more info, call the escrow guy. Having had no knowledge of any problem with a permit, I called the guy and it seems that two years ago, a ticket was issued for construction without a permit. The roof overhang appears to be an unpermitted addition. What? We replaced the whole roof with permits in 2014 and nothing has been done to it since, except a repair to the part over the driveway where someone had banged into the front beam with their vehicle. It turns out, that repair was what triggered the citation. Through a bizarre set of circumstances, neither we nor the property management company had any awareness of a ticket being issued, and the resulting guilty verdict in court. (In reality, I have NEVER had to deal with so many incompetent individuals in my life, but calling anyone out on this would have done nothing to improve my outcome.) Since September of 2019, $100 per day fine had been levied on the house and at the moment of my awareness of this, the total was over $56,000. Friends, I truly hope you never have to experience the level of anxiety I experienced over the ensuing two weeks. I was on the phone daily to the escrow officer, the permit department, the construction services department and the legal liaison for the city of Tampa (who turned out to be my savior.) I had to hire an engineering firm to come out, disturb the tenant who teaches from home and get an official report vetting all the roofing. I don't know how much people's time was wasted from the idiot inspector who issued the ticket (and who was the most defensive a$$hole of them all), but it was substantial. When I finally got the permit cleared, the legal liaison had everything done for me and had reduced the fine to $2010. I've never felt such gratitude for receiving a fine in my life. But, seriously, hallelujah. The house closed a week later as the buyers had waited around and not changed their minds. Kaching! 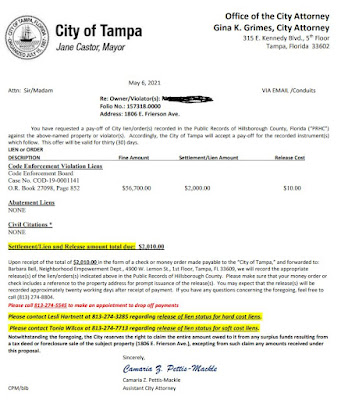 Never have I been so happy to receive a two-thousand dollar bill!

While all that was happening, we were receiving multiple offers on our building in Montreal. We accepted an offer over asking but after the inspection, agreed on asking price. We needed to find a place to live. Our dream of living in the gay campground that had been squashed in October after the deal fell through on our building hung heavy, but another trailer came up for sale and the owners contacted us and asked if we were still interested in moving there. Yes! So we went and had a look. Five years old, everything in great working order with all the amenities we could want. We offered their asking price and crossed our fingers that this deal would not fall through. Did I mention the anxiety? I wanted to carve out my abdomen it was so bad at times. The whole time Montreal was still on lockdown with curfews and no mixing households allowed (I think selling a house counted as essential work, however.) 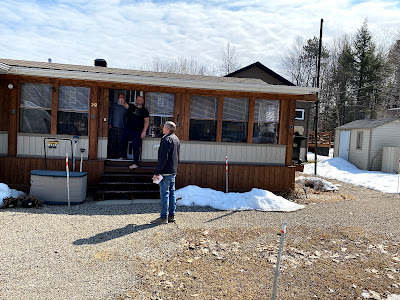 Our first visit to see the trailer for sale. Winter still hanging on. 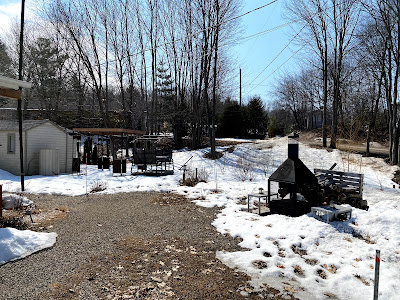 The yard had a nice sized shed, fireplace, swinging bench thingie and barbecue. 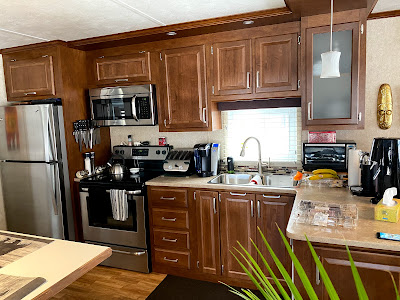 Kitchen with nice new appliances. The mobile home is super functional and even though it's smaller than our last place, it never feels cramped.
As you've surmised, the deal didn't fall through on our home sale and we moved an hour north of Montreal into a trailer park/campground called Domaine de la Fierté. Actually, there are all sorts of residence types here, homes on foundation slabs, modular homes, mobile homes, fifth wheels, RV's, trailers and tents. About a fourth of the 600 spots are year-round homes, such as ours. The bonus for us is that from mid-May to mid-September, the community is gated and limited to gay men with nudity permitted throughout. We like the gay men part, the jury is still out on how we feel about the nudity part. We are certainly becoming desensitized with I'd say about a quarter of residents exercising this right. I still haven't dared. I'm sure I will at some point and that alcohol will certainly be involved if it does. (Blogger refuses to let me justify this paragraph left.) 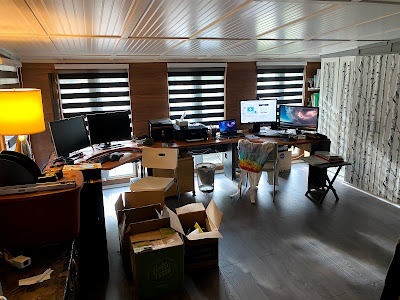 Moving into our new office/guest room. Serge didn't like the forest wallpaper so he removed it after this photo was taken. 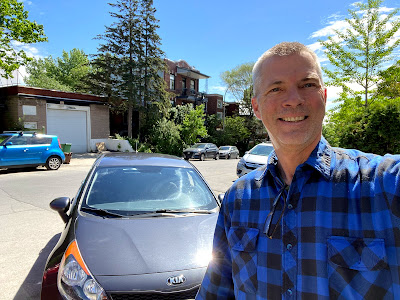 I figured if we are going to move to the country, we will need two cars. So I bought one.
It took a few weeks to adjust to our new life. We are a couple hundred yards from the lake with a sandy beach, the pool, restaurant and bar. We have taken advantage of all of that and I love the 20-minute hike down to the bend in the river with a swimming hole. 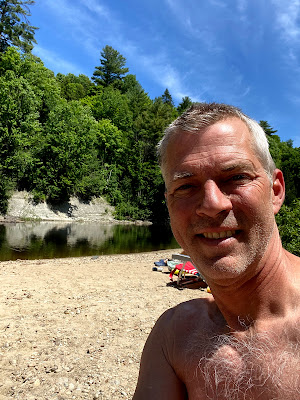 Down at the lazy bend in the Ouareau River. Delightful. 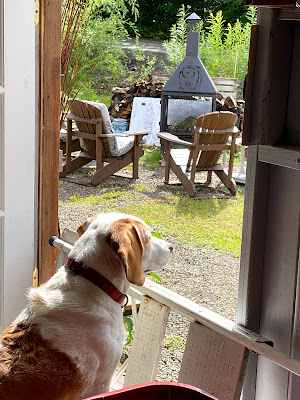 George has acclimated well and loves our morning walks around the forest. 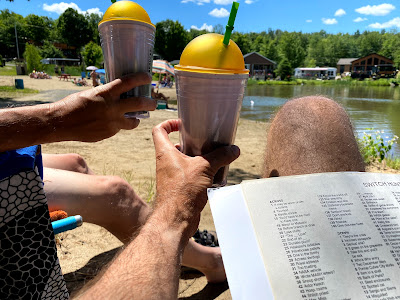 Enjoying beverages at the lake beach. 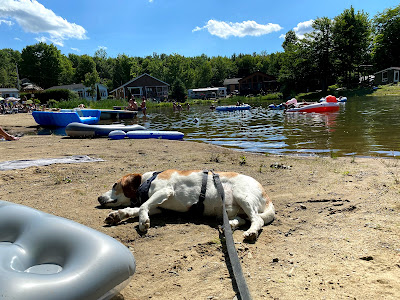 As I said, he has acclimated well. 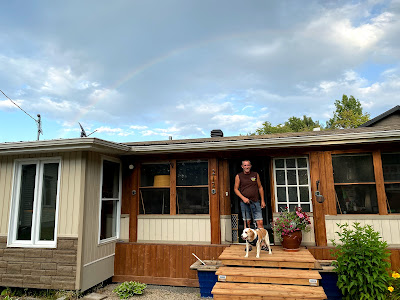 Serge and Georgie on the new stairs that Serge built. What a man!

We wandered around the first weeks stunned. Could we really be living here. Could it really be as wonderful as it seems? Our nightly fires in our firepit, the smiles and waves from everyone passing by, the utter lack of anxiety over tenants, repairs and Florida. I have to say, even positive change is hard, but we have stopped pinching ourselves, joined the local gym, added new stairs to the entry and have settled into a rhythm with George that is anything but anxiety-inducing. We gave all our money to a financial planner to manage so that we can retire in not too many more years. I feel like even though we are not retired, we have entered our golden years. Peace everyone and thanks for stopping by! 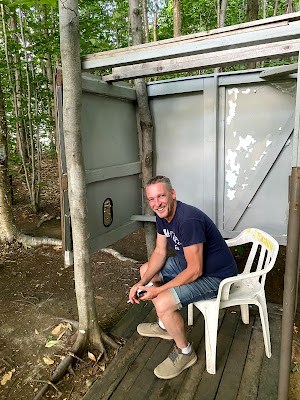 PS: Did I mention the forest area whose entrance sports a sign reading "Sexdom"? The area also sports setups like the one above, often with chairs set up for viewing whatever spectacle is taking place. Not that I would know anything about that. 😏