My second year at Camp Camp

After a one year hiatus from Camp Camp, we went back this year and I had an even better time than the last time we went. So much water has passed under the bridge since then so my mindset was certainly in a better place. I turned off the electronic devices and went off the grid for the whole time. It is so relaxing to detach from technology. 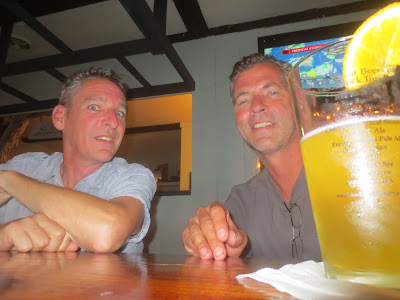 On the way down, an hour outside of town, our car started making a terrible noise so we pulled over and called CAA to get a tow. Luckily some good friends live around there and she helped us choose a garage and arranged a rental car for us. So after a two hour delay, we were on our way. First stop was a Day's Inn in Camden New Hampshire about an hour and a half from camp. Boy did we earn our beers that night. 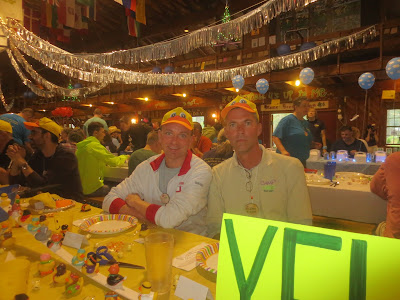 The next day was a whirlwind, got to camp at 8:30 to do an airport run (I worked as a driver at Camp this year) and then I cleaned a couple cabins and I got to greet campers and show them to their cabins upon arrival. The first night everyone eats with their rainbow group. What a nice surprise to find Kevin, one of our new friends we met in Key West to be in my rainbow group which, if you haven't guessed, was yellow this year. I think the cue for this shot was "resting bitch face" but maybe Kevin didn't hear it, lol. 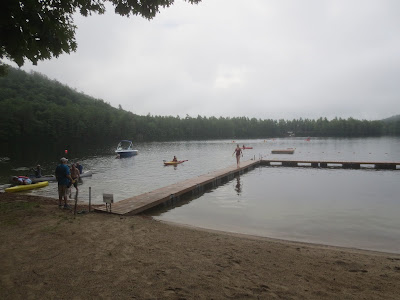 I managed to swim across the lake and back once at 7am for the morning swim. I hadn't been swimming since the last time we went to camp so of course I was crippled the next day from using atrophied muscles for the swim. The water temp was great though and it is so peaceful in the morning with the loons cooing. 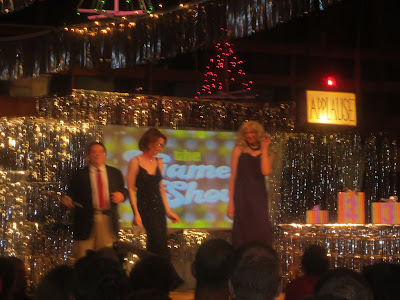 I didn't get any pictures the first night because a cute guy was flirting with me for a long time and it took me a while to slip in the fact that I was married. But he asked me to dance anyway and we do-see-doed for a while. Serge hung out at the smoking table. The next day I gave him a campogram thanking him for the fun chat and dance and he responded by saying he was leaving that day but to keep in touch. It was hard not to take it personally but apparently camp wasn't really a good fit for him. That night was the Game of Shows where we had a very campy series of popular game shows. Didn't get picked to play, pooh. But it was a barrel of laughs. 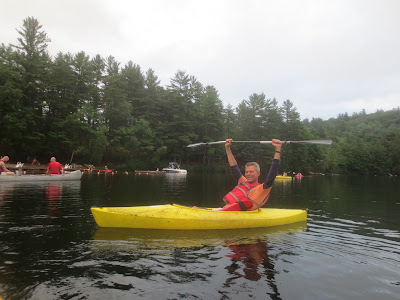 The next day I participated in the morning swim by kayaking alongside the swimmers. The food coming out of the kitchen seemed like a notch up from our previous camp. They even served us lobster rolls for lunch once. Yum! 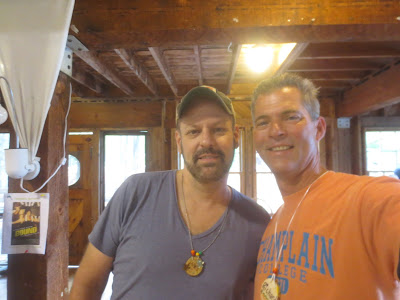 Our cute friend James was there with us in addition to our Key West friends. It was actually through James that I found out about Camp Camp. He worked a lot more than I did so I didn't really see him much except at meal times. It was great catching up with friends we made at the first camp camp and further solidifying those relationships while building other new friendships with new acquaintances. Everyone was just so pleasant and loving. 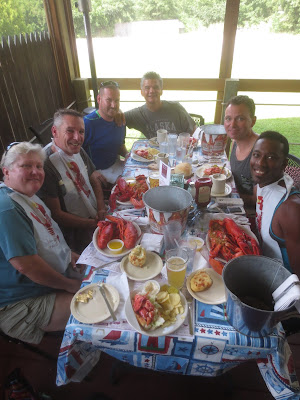 The next day we got a gang together to drive to Bay Haven, this awesome lobster place a ten minute drive away. See those plates of lobster and sides? $19.99 for two big lobsters. I didn't feel like fussing with the thing so I had lobster stew which was chock full of meat and a lobster roll, also chock full. The bill for Serge and I including two beers each was $60. That meal would have been North of $200 up here. Such a deal. 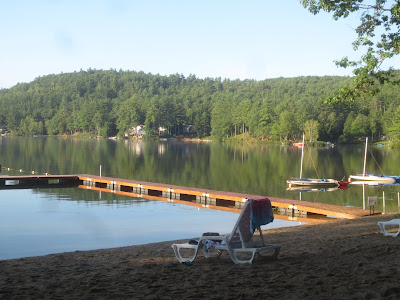 My days were filled with activities, making stained glass, making a ring in the jewelry class and rehearsing for our number at the talent-no talent show. I never did make it to the adventure course or tye-dye and was only able to attend one writing workshop. There were a dozen other activities available as well, you just can't do everything in a week. In the letter I wrote to myself I said to leave one activity period unscheduled per day. I felt kind of rushed all week. Finally on the last day, I was able to swim in the swimming area of the lake and romp around with the floats. 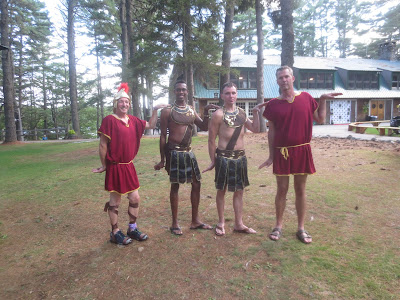 The next day was the event everyone waits for, Tea Dance. Lots of people get dressed up in costume and there is a red carpet entrance for those that do. We did a roman theme with our friends. 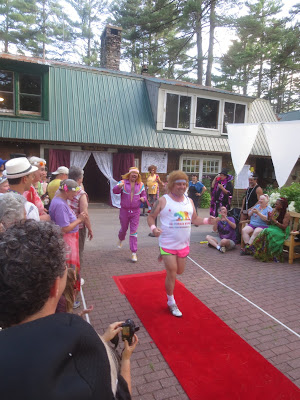 There were a lot of great, elaborate costumes but I think I liked these guys the best. They did a great Richard Simmons and assistant routine. So funny.

The last day was the talent no talent show. I participated in the broadway dance class where we basically had five hours to memorize a routine. It was totally out of my comfort zone but the teacher was so nice and cute and it turned out to be really fun, and a great workout. 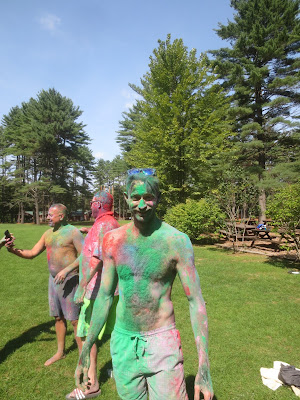 Then it was the last day. I probably took more pictures this day than any. Here you see after the "color wars" where people throw colored powder at each other. I didn't participate but definitely want to next time. 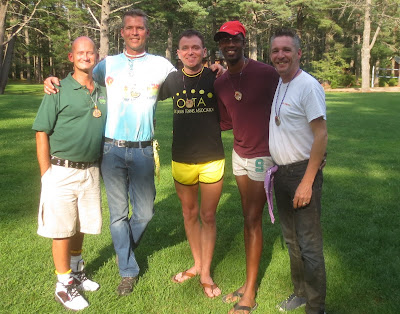 Here are our cabin mates. We all got along swimmingly. I spoke a bit at the closing circle and then cried like a baby (again) doing the walk of angels. I really didn't think I would, but once I closed my eyes, the water works began. 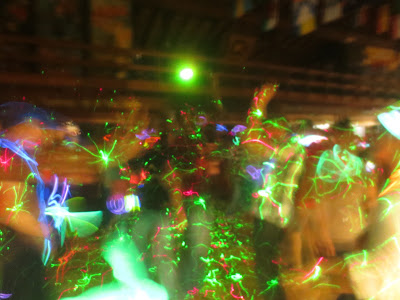 The Camp Camp Dance Dance was the last event. It was fun but I had to leave early as I had an early airport run as driver. We both just had the best time and are counting the days until next year. 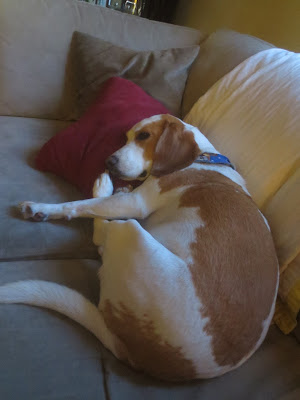 We have had such a great summer but poor Georgie has missed us. He howled with gratitude when mother in law brought him back this time. His health has been great (like his appetite) so that is good. Thanks for stopping by. Mwah!
Posted by tornwordo at 3:15 PM 3 comments: