Well folks, it looks like I'm a twice a year blogger now. It's important to keep it going for me if only to have a record of my life I can review when I'm old and can't remember anything anymore. As it is, Google photos has been very helpful with remembering what year we did what in. So without further adieu, here is a rundown since the mid winter update. 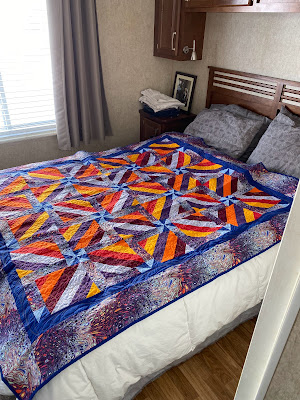 After coming home from Ecuador in February, my mom sent us the quilt you see above. Serge picked out fabric while we were out visiting for the holidays and it came out great. 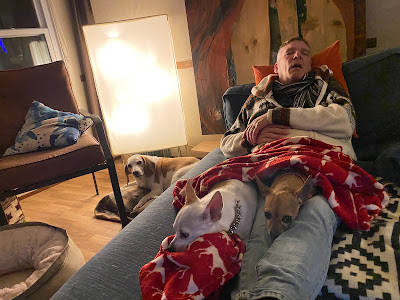 We have started watching dogs again and these little guys are Nina and Luna. Super cute but not house trained. Luckily, they bring a case of pee-pee pads with them that we carpet the carpet with. 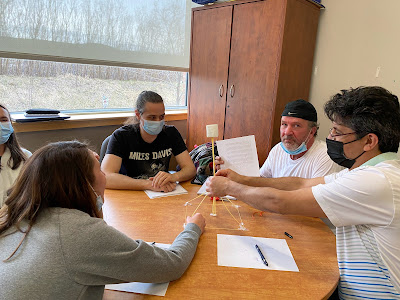 The program that I work in is slowly dying at the college where I work and so I have been less busy than usual. However, I did get a new contract teaching a student success course. Here they are doing the marshmallow challenge for a demonstration on the power of self-efficacy. The downside to that was DRIVING to the college as there is road construction everywhere in Montreal. It routinely required 3 1/2 hours of driving time to teach a 3 hour class. Oy! 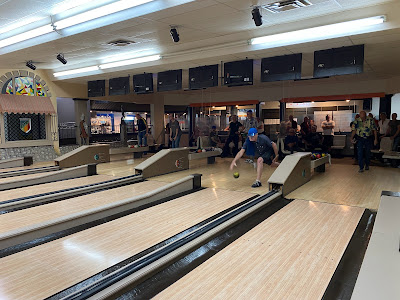 We finished the bowling season in first place! This Friday night ritual was really nice during the cold days of winter when there is nothing to do. We've made some nice friends and the league did several outings including a sugar shack and brunch. It was a nice way to stay connected socially when we are all holed up inside the rest of the time. 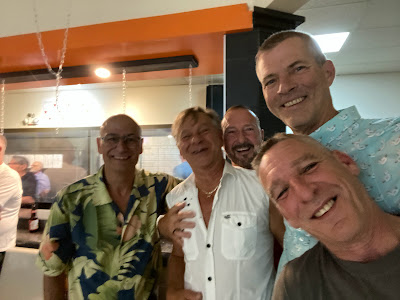 Five of the six members of our team. We've all become pretty chummy and we all live here at Domaine de la Fierte. We plan to bowl next season too starting at the end of August. 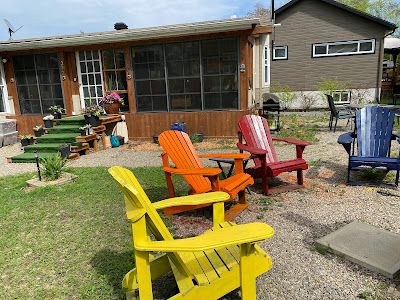 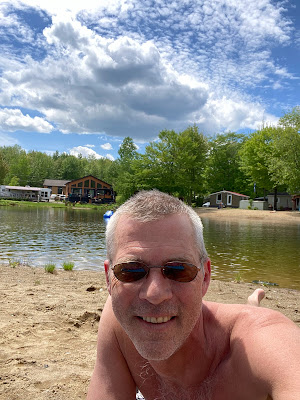 Then in May, we had our earliest heat wave ever recorded here. But it was just a tease like this photo, the rest of the spring and early summer have been cooler than average. 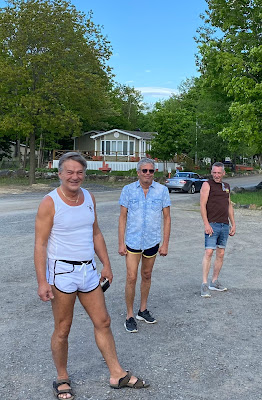 I think I mentioned last time how we have become chummy with the next door neighbors. It has only gotten more chummy since. We regularly dine at each other's house, play cards, dice and have good conversation. We are even visiting each other unannounced now. They really helped us out when the great DERECHO of 2022 came through here and we lost electricity for three days. Since they were hooked to another neighbor's generator, they offered space in their fridge/freezer for us and some internet. I didn't take any pictures of the great power outage but did post a couple bits on FB:

The electricity went out yesterday. It’s clear now that our preparation prowess for this sort of thing is mediocre at best, but when it happened as I shivered in fear in the kitchen as the derecho came through, I thought, at least we’re stocked up on beer. It’s now more than 24 hours into this alternate reality, where internet, television and cell connectivity are quaint pleasantries of the past. I picked up ‘Me Talk Pretty One Day’ and read most of it this morning, and it was as fresh as everything is for me that I haven’t visited in 25 years. Serge got up, asked for coffee (how?) and toiled in the yard planting things he hopes will beautify our surroundings. I went out to search for coffee. This is how I got a glimpse of the end times. Our society’s collective caffeine addiction was on full display as the entire (ok it’s only two streets) town was snarled with surly Starbucks seekers. Later I heard people I saw waiting in line at every fast food place had waited over an hour for their morning concoctions. I’m no fool, when I saw the mayhem, I headed for the car wash, they always have coffee, and there was only one shrewd local in front of me when I arrived. Serge had asked for a McMuffin (the lineup there was hahahahahaha) when I headed out, and at the car wash they had a shrink wrapped egg salad sandwich, and I thought, this is what one eats at the end times. I bought it and Serge was grateful. The day continued neither propelled nor impinged upon by anything electronic, and we went on a long walk through the neighborhood with George. We encountered other sullens making the best of things and exchanged complaints about the situation as pleasantries. This is how I learned it could be a week before service is restored. Wut? I can do a day of this, but I haven’t noodled through my brain a long term commitment. The neighbors stopped by and offered fridge and freezer space as they and three neighbors shared a generator to keep theirs going. Whew, meat saved. We then enjoyed a game or two of cards and cooked fridge perishables and hotdogs on the bbq. Vive le propane. I’m heading to bed and plan to kneel and pray properly for electricity. If this posts, I owe Serges wifi cellphone hotspot for that success. Here are a couple pics from that walk this afternoon.

Day 2 of the Great Power Outage of 22 started out alright. Serge had suggested making coffee on the bbq, or rather boiling water for coffee. It turns out that redundant little side burner outside the bbq is useful. Last time we had an outage, we learned that when the power goes out, so too do the pumps that deliver water. We also learned the hard way that a number two requires water, so there we were trudging back and forth to the lake with buckets to refill the toilet tank. We vowed to be prepared next time so we stuffed a dozen empty two liter soda bottles with water into every last hollow of our mobile home over the ensuing months. By the time Serge went to work this morning we had one number two’s worth of water left so he took along empties to refill there. You would think that by day two we’d have stopped looking at the digital clock faces or flipping on non-functioning lights, but you’d be wrong. It’s truly alarming what idiots we are. Both breakfast and lunch involved bread and peanut butter. My gratitude for the future working condition of the toaster cannot be overstated. (I was going to treat myself to a fast food lunch but all the lines were hahahahaha again, and I didn’t see myself going to all that trouble for a poutine.) While dreaming up the next non-electronic thing to busy myself with, I decided to ask the tarot cards about the situation and although I was brightened by the good advice and solution they foretold was coming, it irritated me that no timeline was divulged. If I had internet, I’d look to see if the cards had any day of the week connections, alas. At some point today I realized that my life now resembled George’s life and I explored the joys of staring out the window for an hour and dozing on the sofa. The constant clattering cacophony of generators has replaced the birdsong soundtrack and it’s clear that several neighbors made major purchases yesterday. Can’t they put mufflers on those things? They’re descendants of the leaf blower family I’m sure. I canceled the one hour course this morning I was supposed to do on Zoom, but tomorrow I’m scheduled to work all day so off to mother in law’s house we go to crash and work tomorrow out of the basement. The best part I’m sure will be not having to do number two water math. My prayer didn’t work last night, so tonight I will add a few more “pleases”. Here’s George getting some sun on his fire pit cushion today.

On day 3 we did indeed flee to mother-in-law's house to have a shower and so I could teach via zoom. The power came back at the end of day 3. 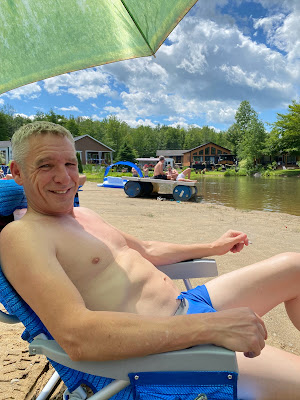 At the end of spring, Serge got a part time job at the local Rona (think Home Depot US peeps). He laments that the weather is always bad on his days off, but here is proof that it is not always true. 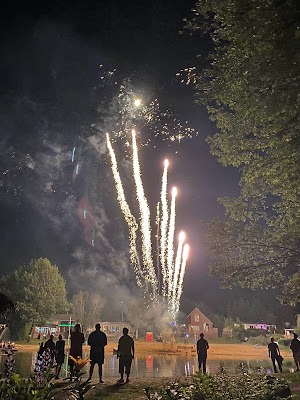 For the Quebec nationalist holiday they had a really nice fireworks display by the lake which we watched from the yard of our friends and bowling team mates as they have a house on the lake. 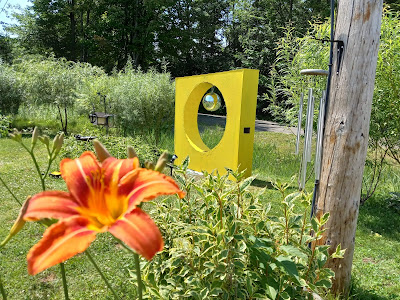 Serge decided to build some art in our yard, so there you see the glorious hole as a friend put it. The disco ball is lit at night and makes our yard magical. Probably could be a visual definition of "eye-catching". 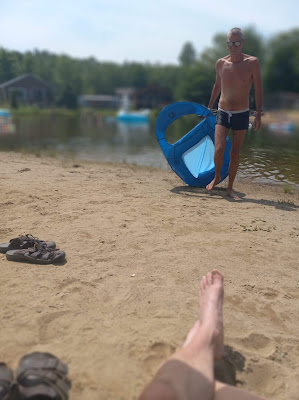 Finally, here I am with my new floaty chair. It is wonderful lounging in the lake with it.

Other than that, life is very copasetic here and old friends from Montreal visit frequently since this is like the "gay getaway" place for city boys. George is good, our health is good, and we are surrounded by friends. It still feels like we are in our golden years despite both of us working part time. Until the next dispatch peeps. Mwah!