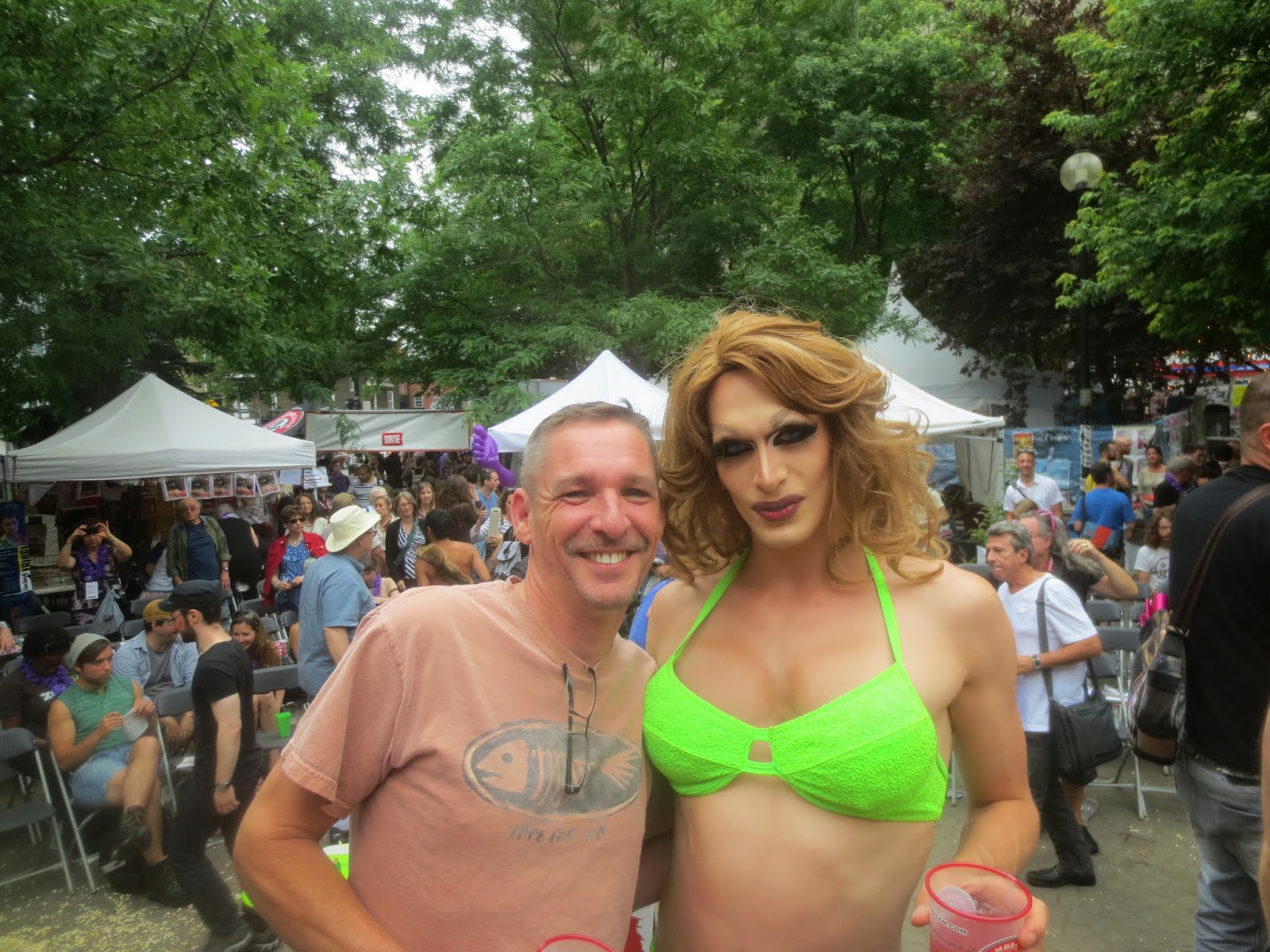 Hey y'all what's shaking? It is the most fabulous season of all in our fair city, SUMMER. We got things started at the Fringe festival watching Mado's drag race. She pairs professional drag queens with never-before-done-drag queens and makes bad jokes while a panel of judges gives scores. It was more and more fun as the event progressed because Serge and I had brought our drinky-drinks in sippy cups. Wonderful free event we will probably see year after year now.

I finished working for the summer and every day I wake up and then realize that I don't have to do ANYTHING if I don't want and happiness sets in. Serge keeps inventing tasks for me but dangit, I want to enjoy this time off. 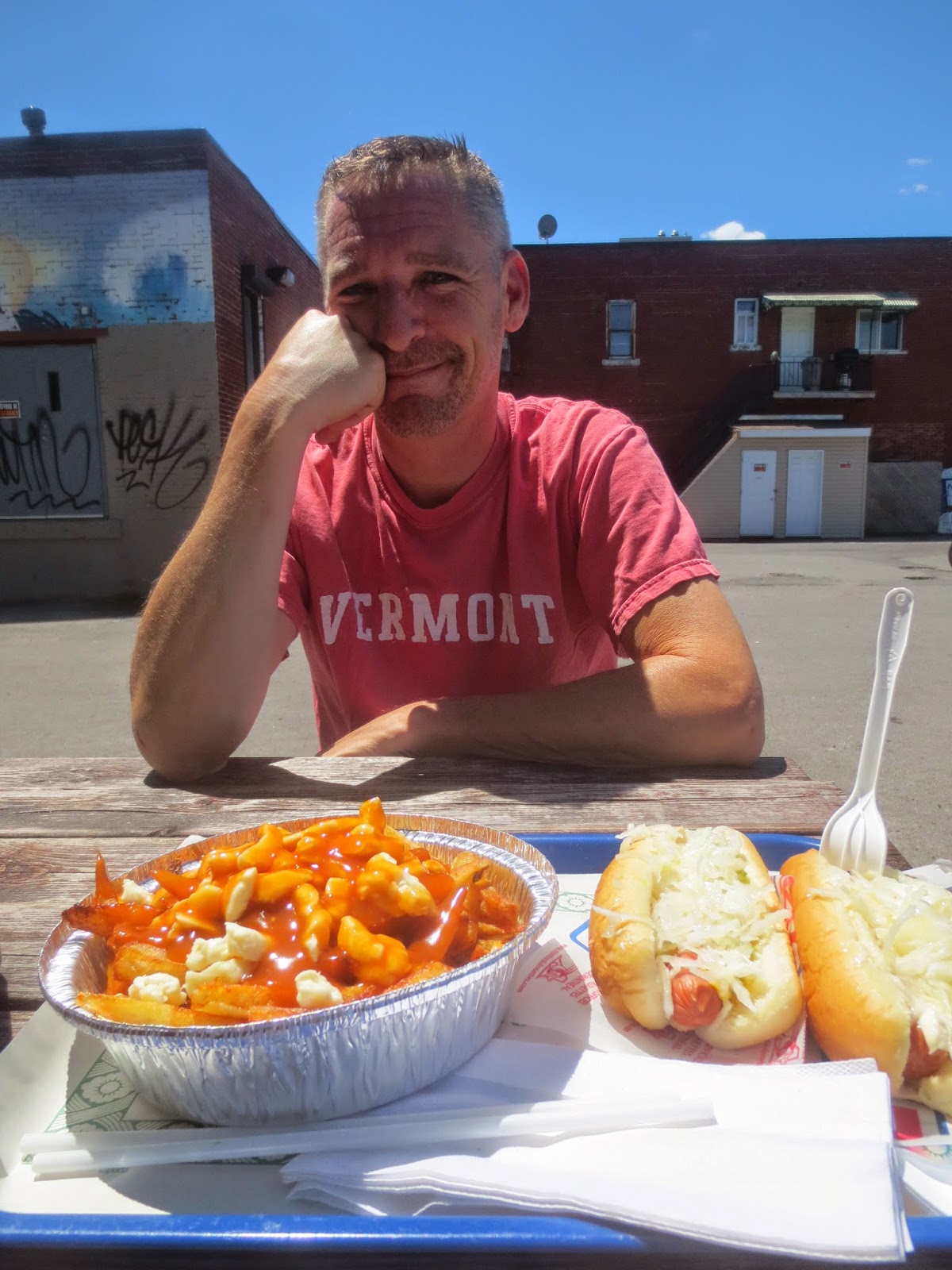 We haven't been eating all that well, and this has given rise to weight gain. I am back up to 170, a weight I haven't seen in nearly two years. Is there anything better than a poutine and Quebec style hotdog? That's not saurkraut on the dogs by the way, it's coleslaw. 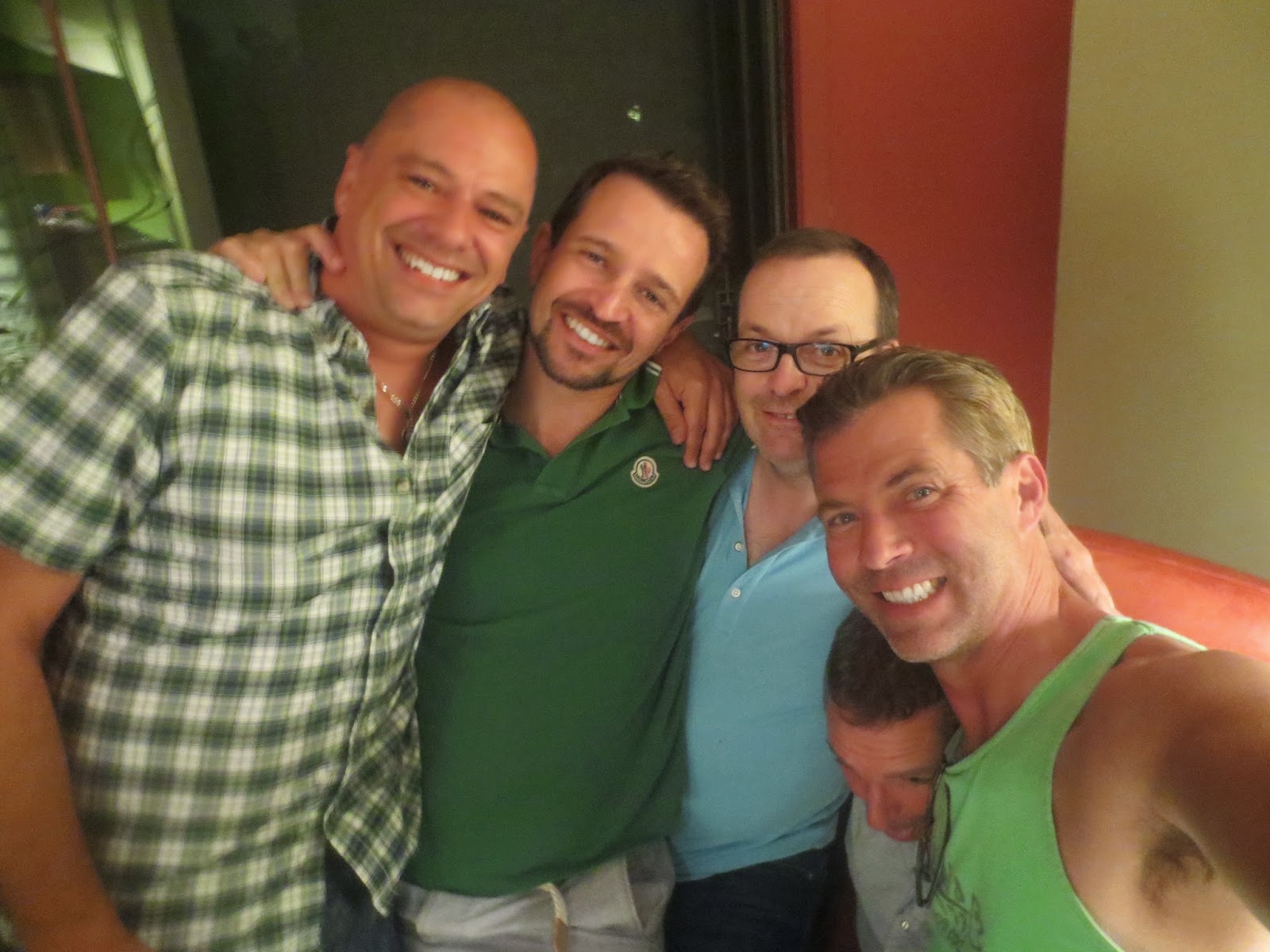 It's also barbeque season. Spent a delightful evening with old and new friends. The James Franco looking guy is a new one. Quite charming even if he is Parisian. Poor Serge with his sore ribs didn't quite get his face in the shot. 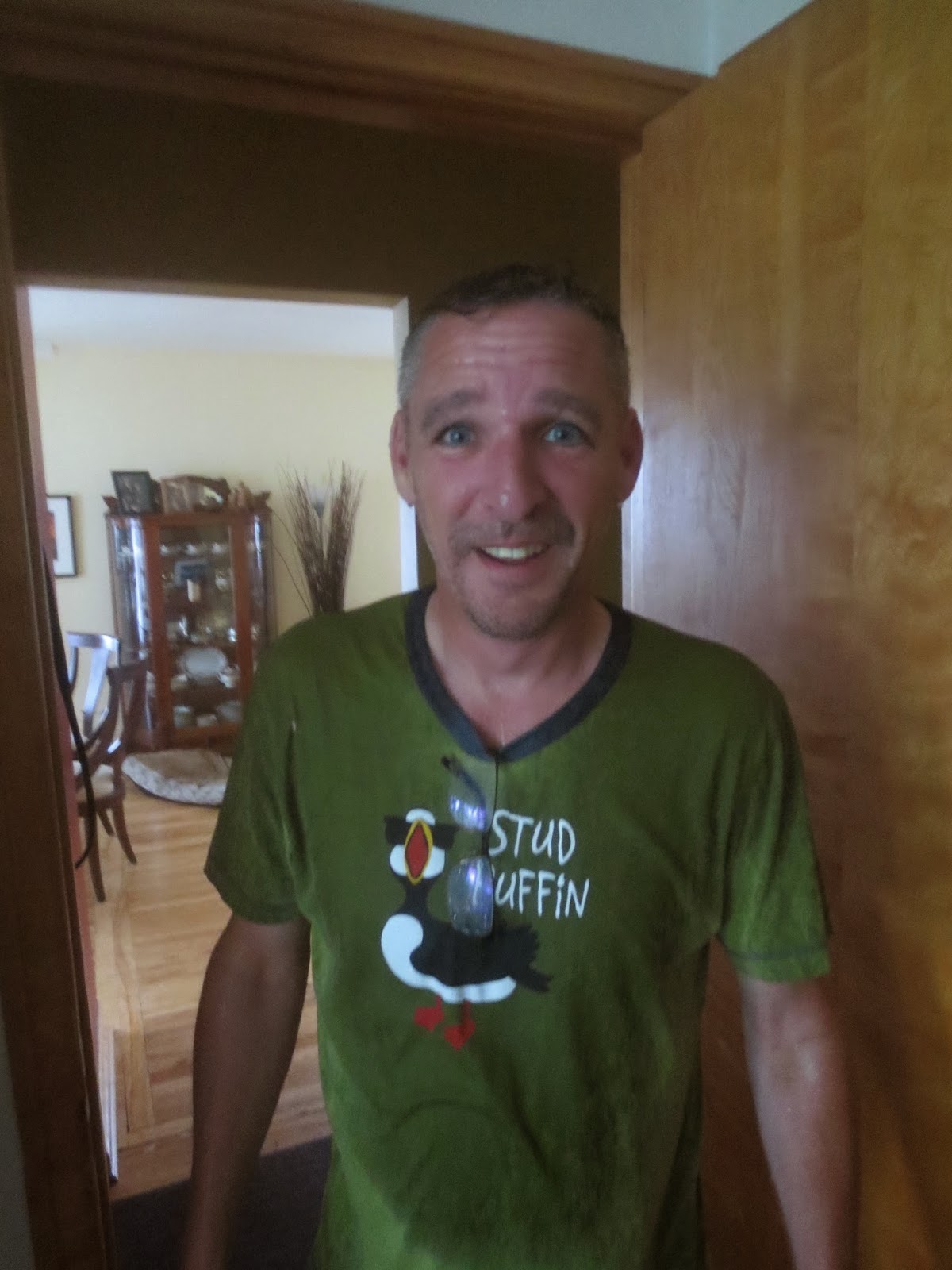 We have been going to the movies too. After 14 years up here I learn that movies are half price on Tuesdays. We saw Maleficent, Non-Stop and Chef. We liked them all but Chef was just wonderful. Exactly our kind of movie, quirky and feel-good. Funny too. Exiting the metro after seeing that there was a cloudburst waiting for us. It's a five minute walk from the metro and we got drenched. 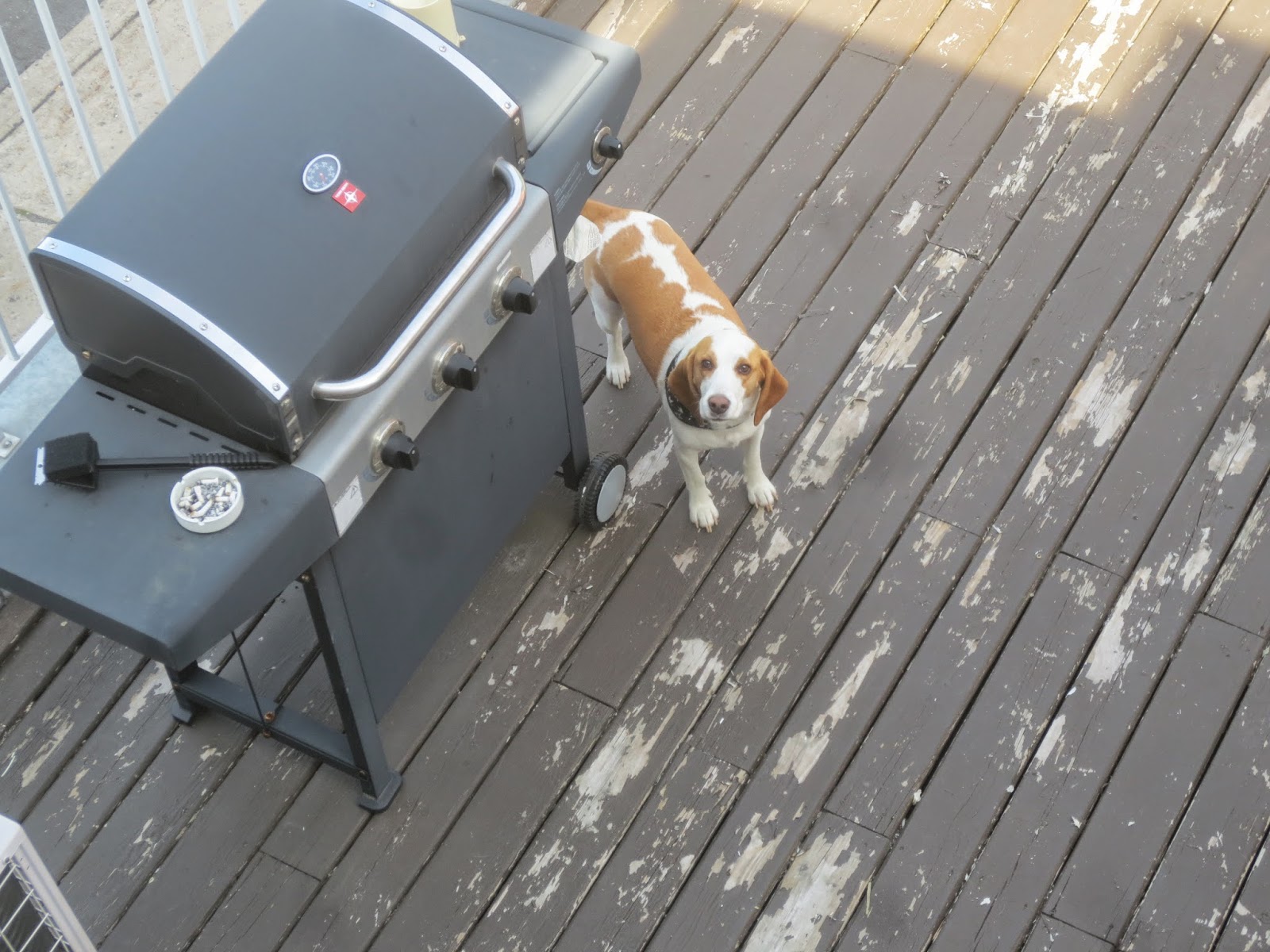 One of the tasks Serge gave me was to touch up the deck paint. The winters are just too harsh here for paint to adhere permanently. I acquiesced and did the job. The view here is from the upstairs neighbor's balcony. We had been trying to rent that apartment for months and showed it to dozens of looky-loos. I was getting pretty panicky as July approached. Finally, a nice French girl from Paris swooped in two days before the deadline and signed a lease. Whew. And we learned that 4% of the apartments did not find renters here. There is an overabundance of units here due to the condo building craze. It is a buyer/renter's market. We even lowered the rent $25 which is a first for us. 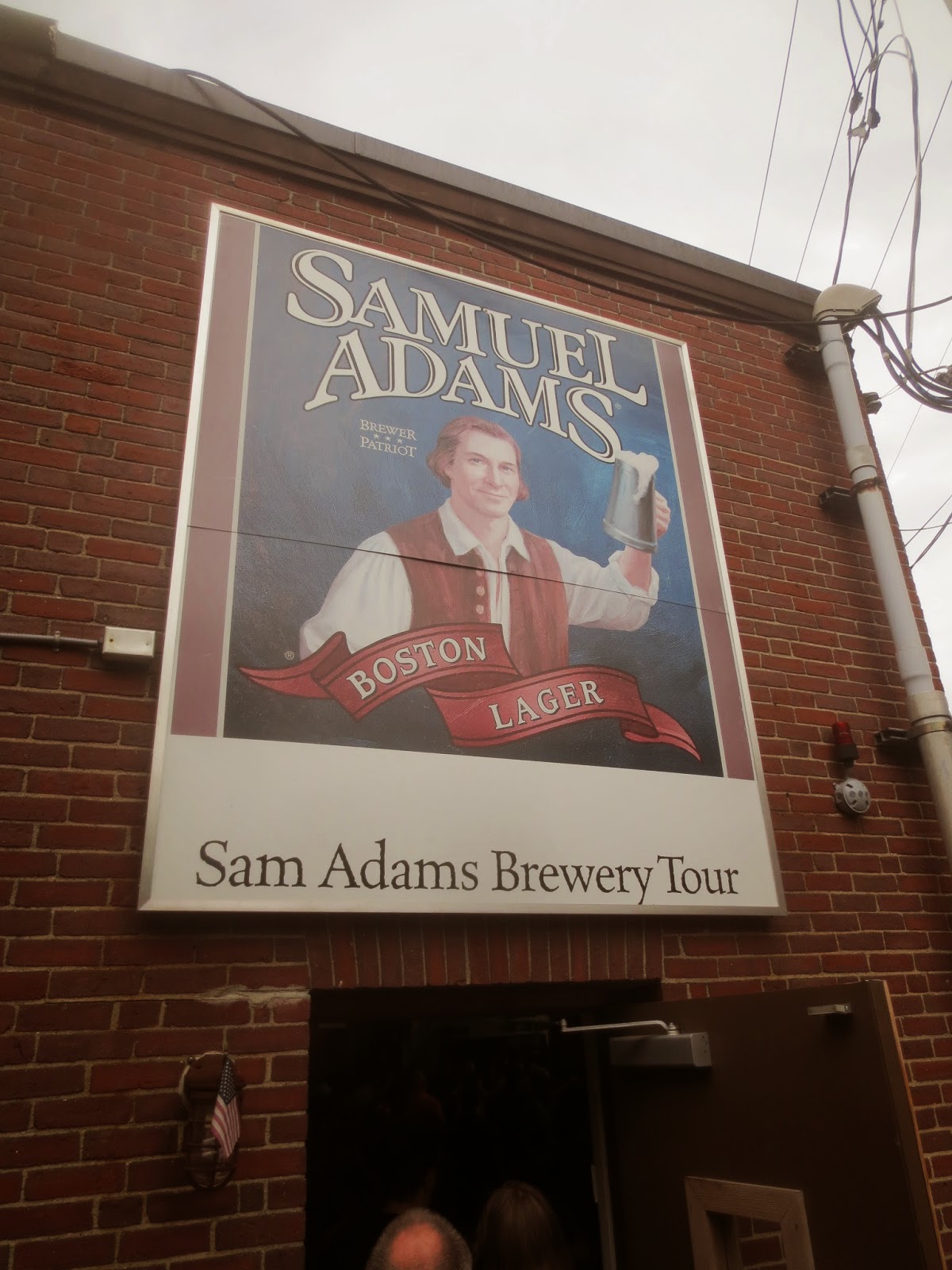 Then I got an invite from friends in the Boston area to come down for 4th of July weekend. Serge didn't feel up to the 6 hour drive because he is still in a lot of pain from his broken rib fall. So I went alone. As hurricane Arthur approached, we took the Samuel Adams brewery tour and I finally got to have the shirt I have wanted for 20 years. The subdued red one. YAY! Seriously, I was so happy to have it, I would have paid double. It's the little things. 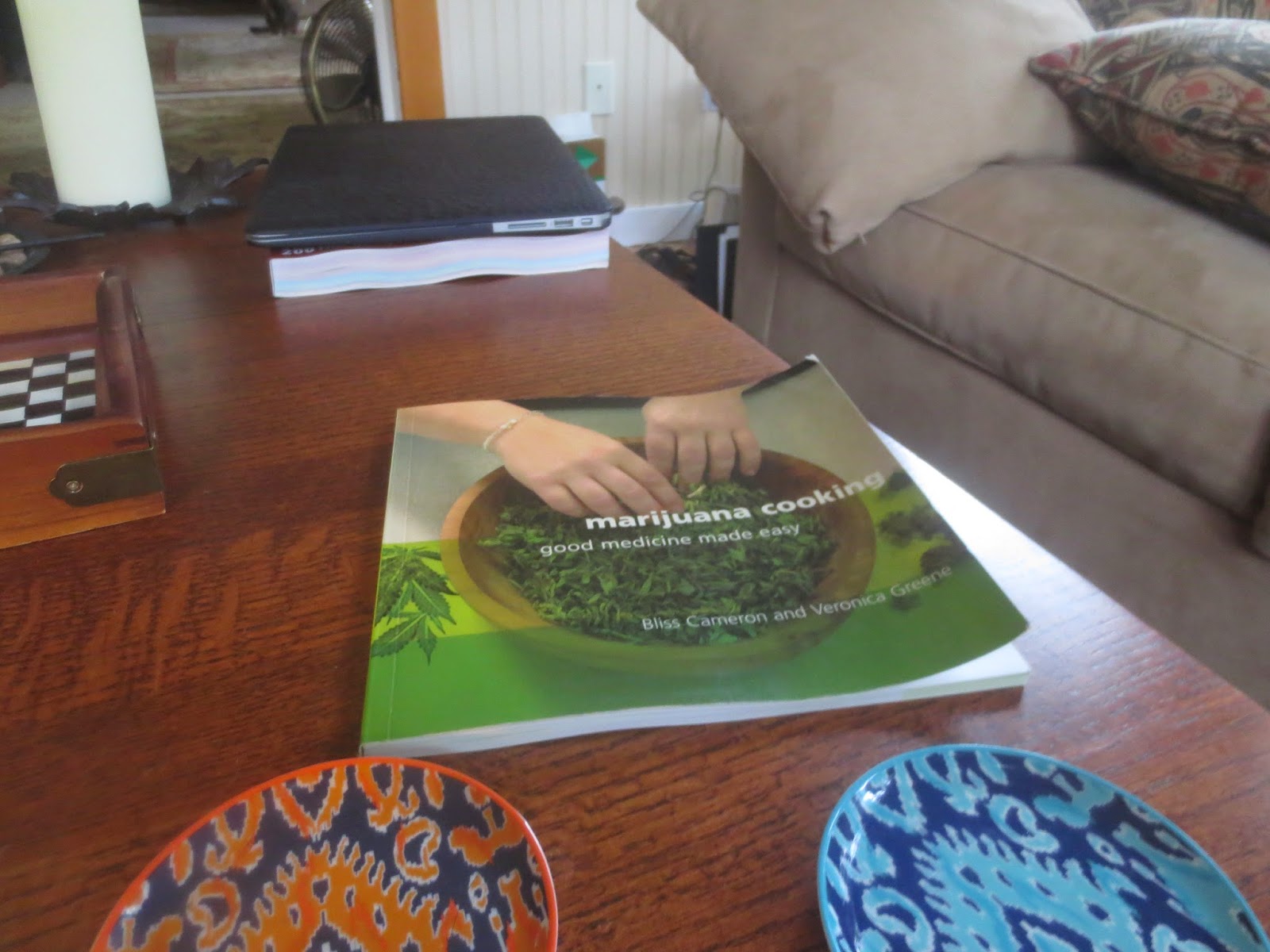 They kept talking about how they were going to make magic rice krispie treats. I thought it was the Fruity Pebbles they added for the tye-dye effect but no, it was a little more than that. They were divine after our 4th of July bbq that turned into a non-bbq. 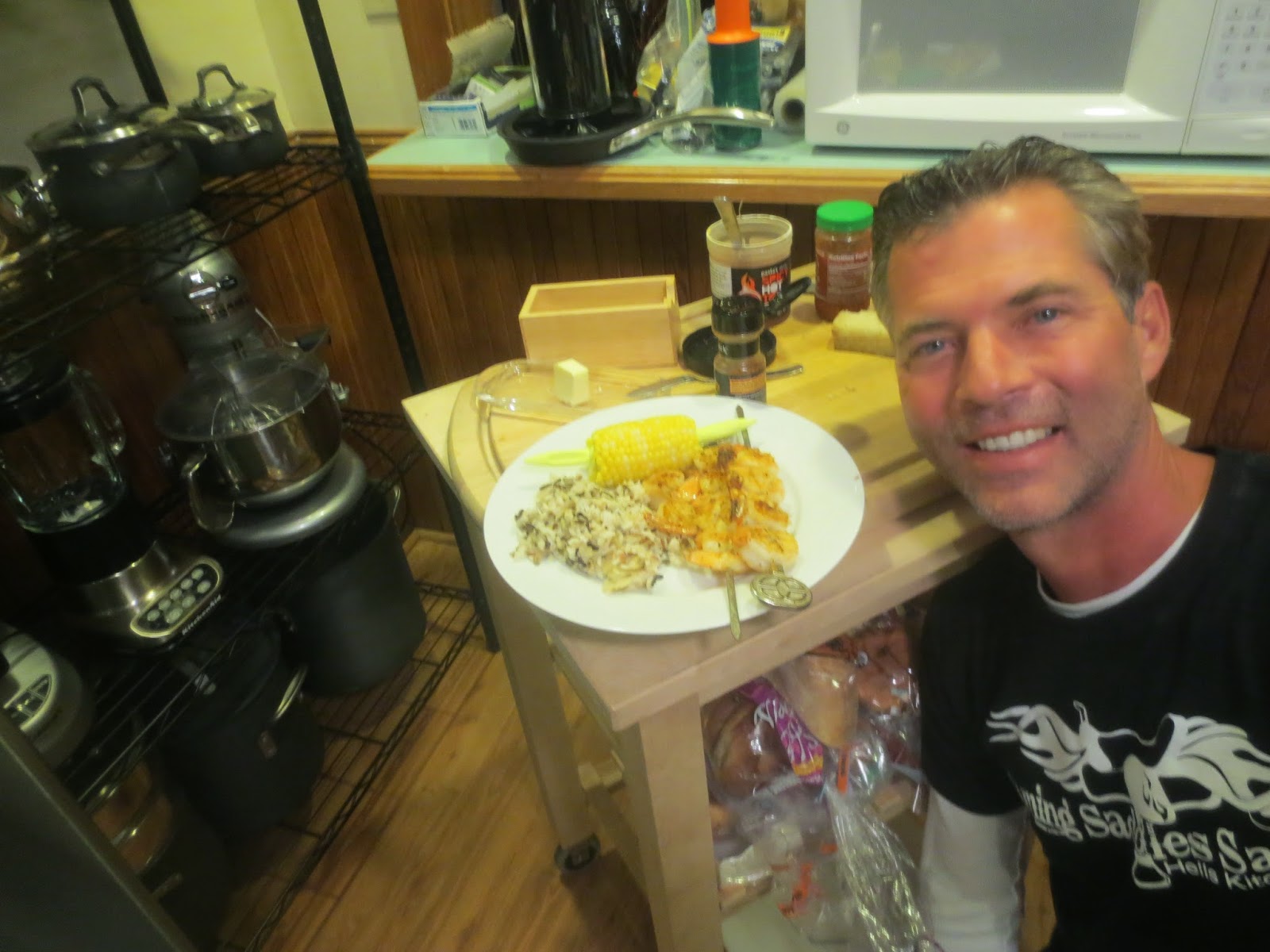 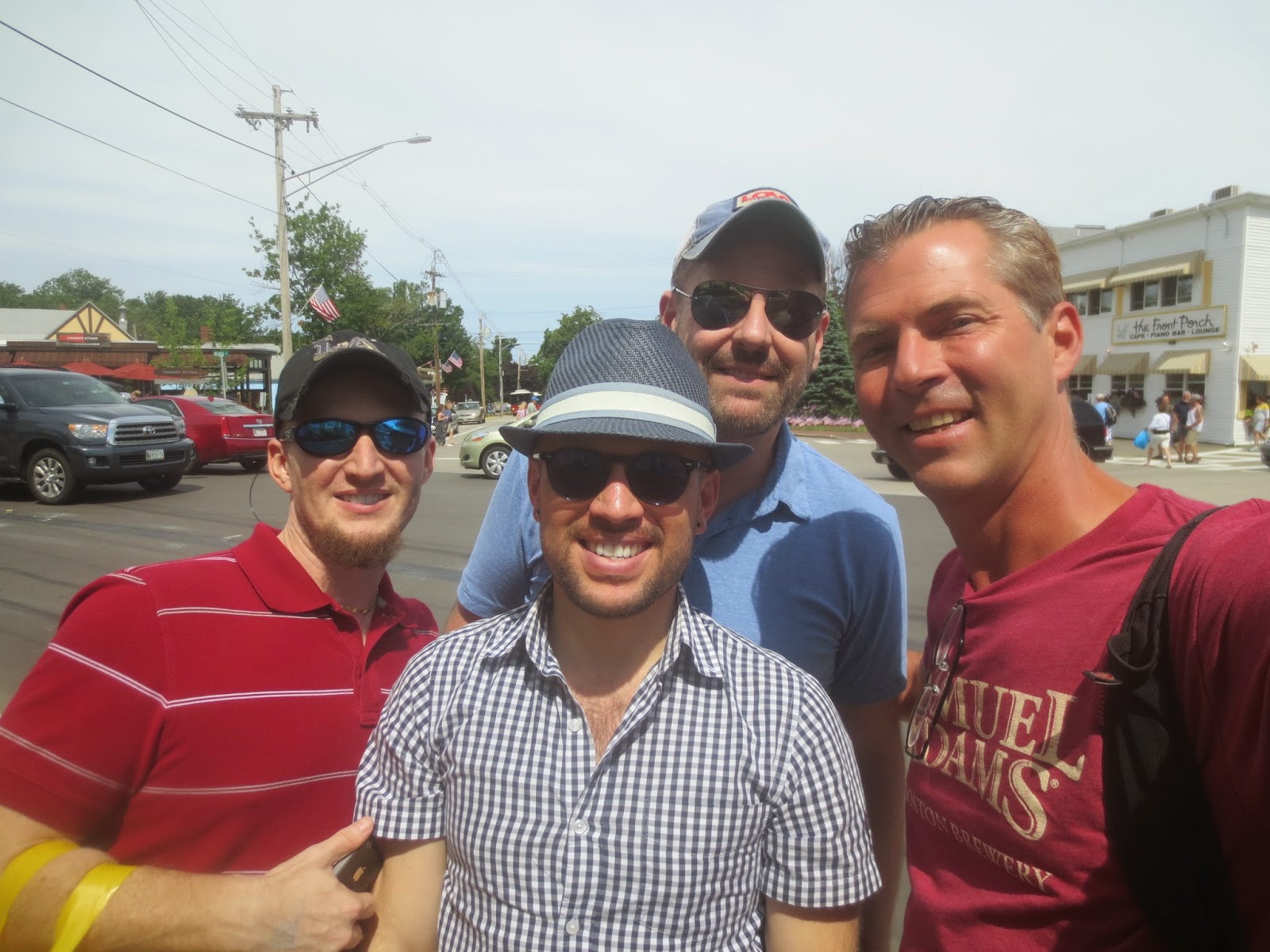 The next day was beautiful again and we all piled in the car and drove up to Ogunquit for the day. There you see the Sam Adams shirt I have lusted after for so long. That evening the fireflies were out in force. I had not seen them since I was a kid and visited Cuernavaca in Mexico. 35 years later I was just mesmerized by them winking in and out in the forest and bushes. I really saw why people believed fairies inhabited the forest as it was just magical.

We have been having our weekly happy hour gig as well. Here you see our favorite (and drop dead gorgeous) waiter handling something one of our friends had purchased. It's in Frenglish so you probably won't understand it all unless you are a Montrealer. Serge is certainly happier at happy hour and that makes me smile. He is still moaning and groaning about his ribs, but he is probably only half way through the healing process. If he is lucky. 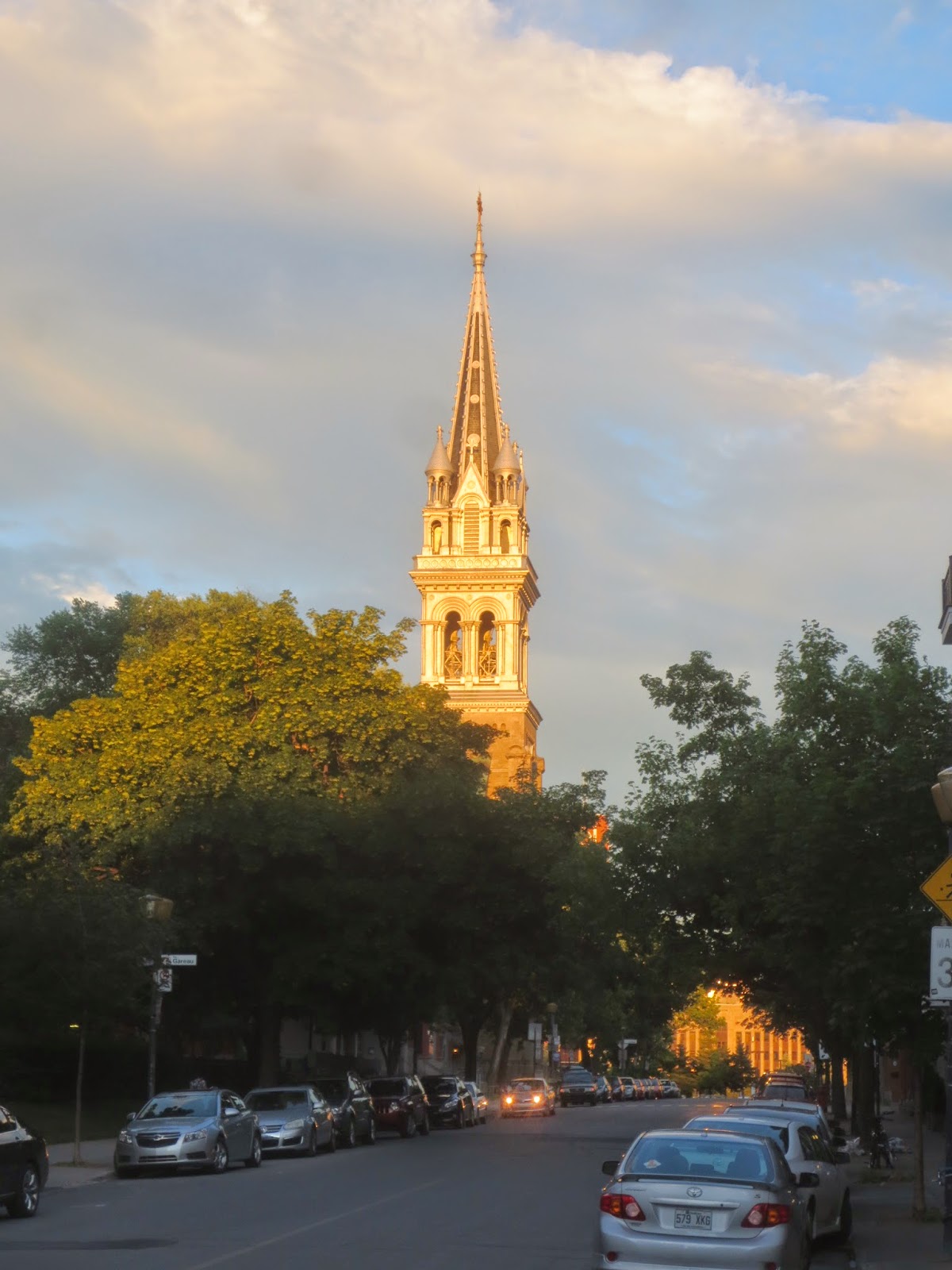 Summer is just fantastic in Montreal. It's festival season and I completely missed the jazz festival darnit. Diana Krall gave a free concert and I am kicking myself for having missed it. Oh well next year. The other thing that has been ongoing is my blood pressure situation. After months of trying different meds to get it down, the doc finally gave me a year long prescription of Ramipril which is generic for Altace. It runs in the family so it is to be expected but I didn't think I would already be on meds for the rest of my life. 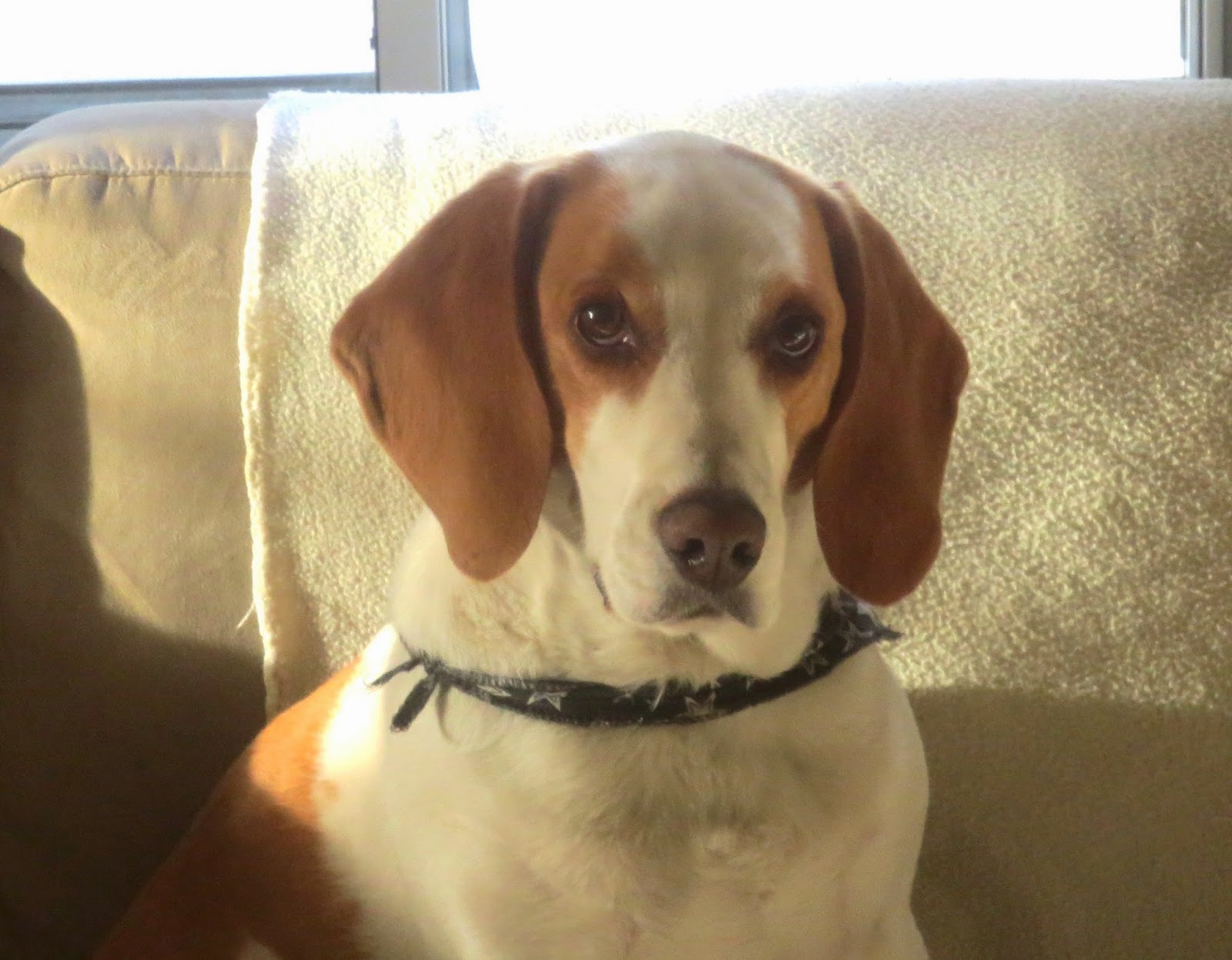 Here you go Blobby, a second Georgie pic. He has been great lately although he is a total blob in the summer. Next up on the agenda is another little road trip, this time to Toronto. I will head out tomorrow and attend the WMTC annual potluck for the first time. I love meeting US expats up here even though I feel like I already know them through their blogs. Until next time my lovelies, Mwah!
Posted by tornwordo at 11:50 AM 4 comments: