A couple trips out West

When last I popped in, I was winding down my work contracts and getting ready for six weeks off. Ah, summer, it certainly makes being a teacher lovely to have summers free. As I said last month, the house is up for sale but we have only had one visit so far so either the price is too high or everyone else is enjoying summer too.

In July, I took off for two and a half weeks to California. First I went to San Francisco to visit our new friends that we made on the family cruise and also to hang out with my brother. 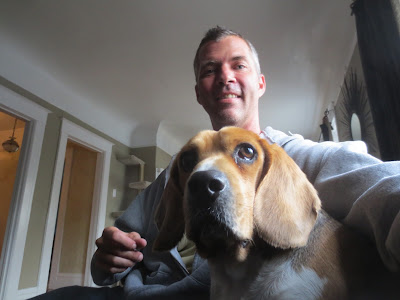 I was delighted to meet Dexter, the boys' dog who like Georgie is a beagle and he warmed to me straight away. The boys live in a charming apartment building in Russian Hill and it was a great little neighborhood full of cute shops and eateries. My absolute favorite restaurant in SF is closed on Sunday (what restaurant closes on Sunday!?) so I couldn't go as I didn't know this salient fact until it was too late. 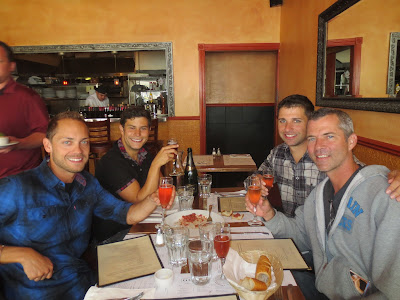 We caroused most of the weekend and enjoyed what makes San Francisco so great - FOOD. I also got to meet up with my bestie in high school for drinks in a speakeasy. The pics came out lousy but don't want him to feel slighted by omitting that. Thanks Dave for the drink, I owe you one. 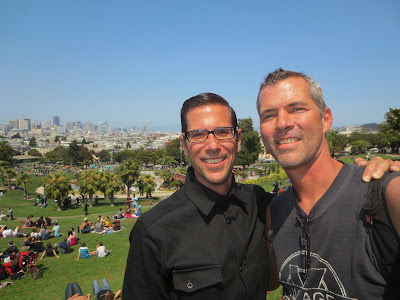 Enjoyed hanging out with baby bro and the weather was perfect. We walked all around and drank and ate and drank some more. 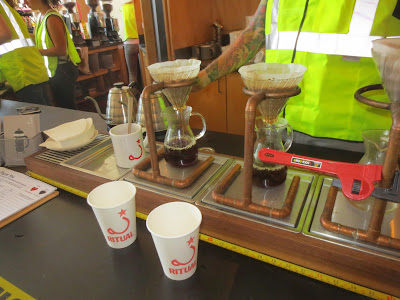 I guess this place thinks they are taking coffee to the next level. All I could think was, you know there are machines that do the same thing. Coffee theater. 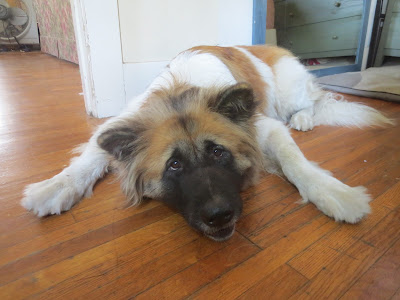 After that rather debauched weekend, I headed down to M's house to begin an enormous project. I was so happy to see Bear again, what a great dog. She also warmed to me after the initial growling and barking. 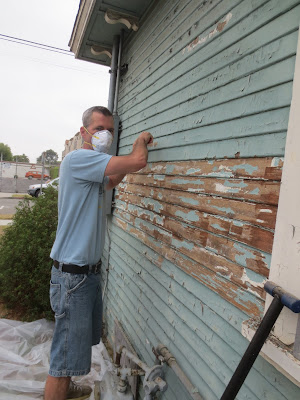 And then we began the enormous project of life, stripping and painting the exterior of her house. I agreed to come and help and at the same time used that time to process and heal over some unmentioned events. Don't worry Serge and I are fine, there just aren't any roads without a few potholes, you know? Have you ever scraped paint off of wood? It is a grueling task and it took us six full days of hard labor to do it. 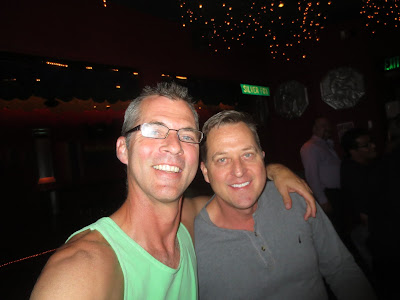 In the evenings I got to meet up with friends that I usually don't have enough time to spend quality time with so that was an added bonus. Bob and I used to work together oh so long ago, but we keep in touch. We went to my old watering hole in Long Beach and I said that if John was there he would call me "Tiger" and sure enough that's what happened. And I haven't been there for 10 years. I guess I make an impression. 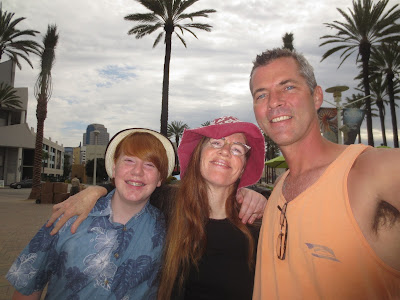 There's M and her son N as we were waiting for mom to arrive at the Aquarium of the Pacific. It had stormed in the night and the air was definitely tropical. I had hoped for more thunderstorms but alas, my wish was not granted. 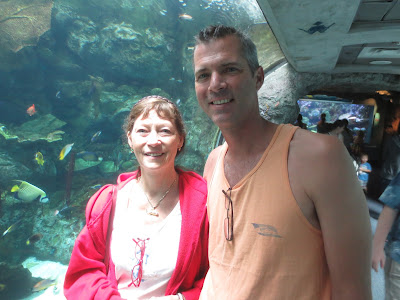 Mommy and I at the aquarium. It was really great to spend time with her and her two visitors for the summer. They hosted two Spanish girls for six weeks. The girls' dad stayed with me one summer when I was a teenager and now he has seven, gasp, children. Lovely girls. 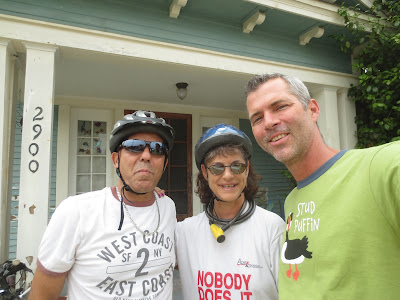 It was great seeing D and N for our 10 mile bike ride on the beach path in Long Beach. That shirt was a gift for Serge but since it hadn't been washed yet, the medium sized garment fit me. Once it was washed it was definitely Serge sized. 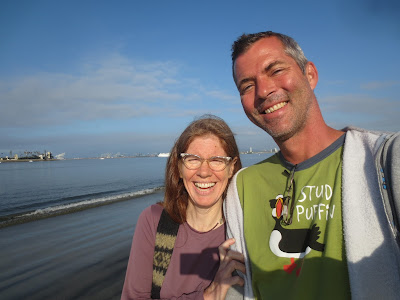 The next day was my birthday (Yes the same shirt but only in the morning). I have never been so happy to turn a year older. 47 will go down as one of the worst years so turning 48 came with lots of positives. M took me down to the beach where we did a little ceremony to let things go and to start anew. Something changed in me that day and I am filled with gratitude for that. 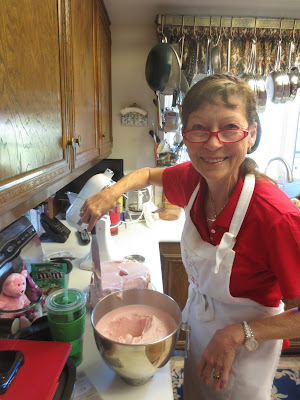 Then we went down to mommy's for the rest of the day. Here she is making my favorite birthday cake in the world and one I haven't had in thirteen years. Confetti angel food cake with strawberry frosting. It brought back the kid in me. 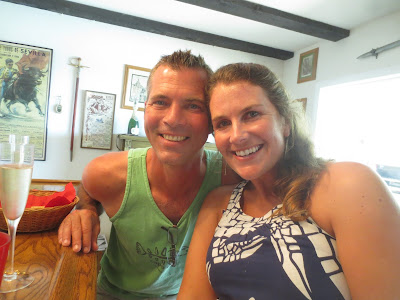 Mom also invited people to my party. What an unexpected treat. Got to hang out with the cuz, the niece, the aunt etc. There was far too much free flowing champagne as evidenced by the next morning's headache. 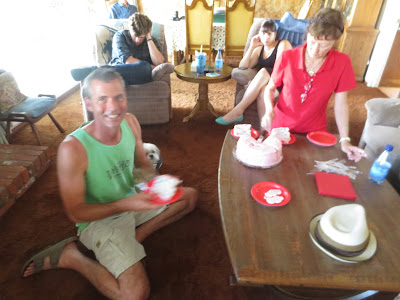 Cake! The tan was courtesy of house scraping. Ooh and I was sporting my new Birkenstocks. My old ones lasted 13 years so even though they are expensive, they really aren't when you consider the longevity. 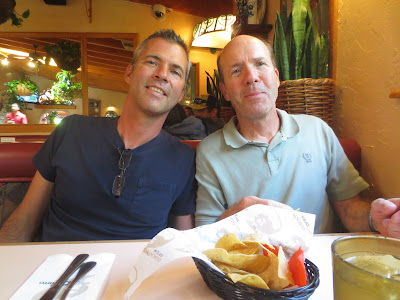 The next day (a tad hungover but I don't look it) I hung out with Dad and his girlfriend and grandma. We had Mexican food (I ate Mexican food for 8 straight days once I got there - yum) and then went on a hike. 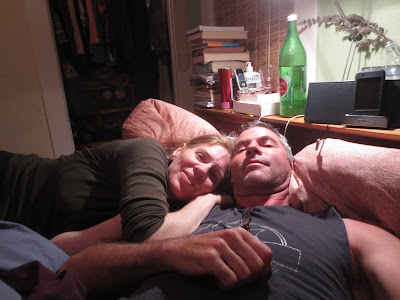 M and I lived together about 25 years ago but it felt like it was just yesterday. Even though we worked our asses off, I really enjoyed all the time we got to spend together. 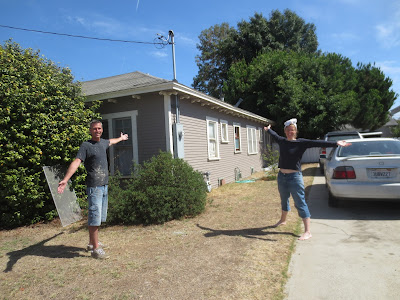 Finally we finished the immense project of doom. Serge says it doesn't count since we didn't do the trim. Bite me! The trim is a much smaller, manageable project. It was cool how this pic got 60 likes on FB. 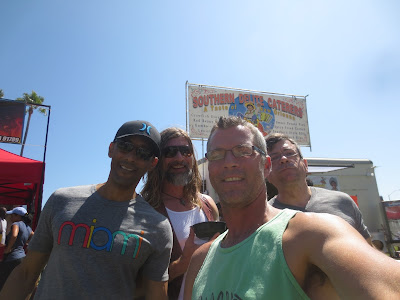 Met up with some other old friends to go to the Crayfish Festival. Although the Crayfish Etoufée was delightful, watching the murder of hundreds of thousands of these creatures was a little hard to take. Seriously there was an enormous contraption with a crane that lowered them into the boiling water. I refused to take a picture of it. 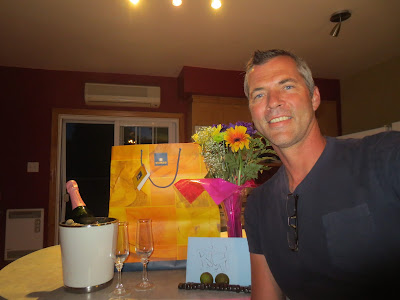 When I got home, Serge had a surprise waiting for me. What a sweetie. I really missed him too even though we Facetimed almost every day. 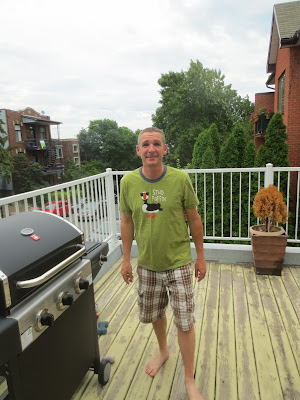 Here is my honey in his preshrunk (and worn by me) shirt. My little stud puffin. 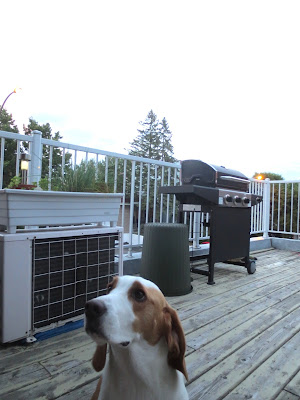 Georgie was really happy to see me too. We took a video of it but it's too big to upload, but he just went nuts shrieking when I arrived. It sounded like he was in pain, but they were shrieks of joy. Love the little guy. 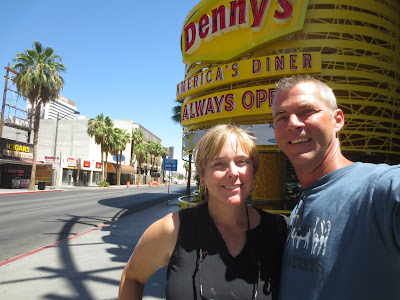 I wasn't home for long though, as five days later was my annual junket to Las Vegas with B. We took this pic because this Denny's has a full bar. Unfortunately our heads blocked this part of the sign. We ate there but didn't drink since the drinkies are free while gambling. We love gambling, it's part of why we go. 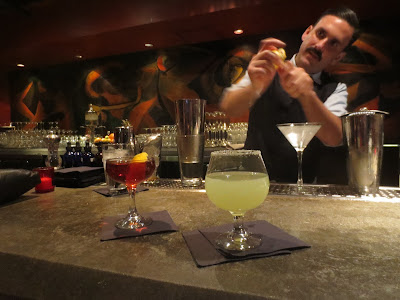 We also went back to Downtown, this great speakeasy type place where the mixologist really knows his craft. I had two of those before we had the best Thai food I have ever eaten. Then we went to the El Cortez and I won some money on the Kitty Glitter machine. Yay! 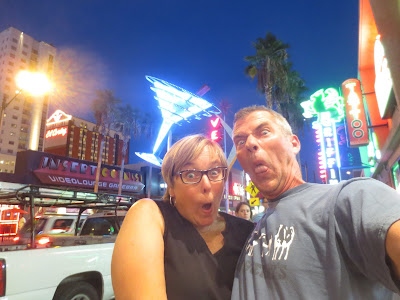 I just love being goofy with my friends. The last night we went to the strip and saw Ka, the Cirque du Soleil show where someone was killed during a performance a couple months ago. It was good but I've seen better.

So now the blog is caught up again. We are not finished with the traveling yet though. Tomorrow we are headed to Maine for a week at Camp Camp. It's an all gay camp that recreates the summer camps of our youth replete with tons of activities to keep everyone entertained. Perhaps there will be another blog post after that. This will be the end of travel until the holidays. My bank account is not only bruised, it is bleeding. Thanks for stopping by!
Posted by tornwordo at 4:51 PM 6 comments: