I was down at the world trade center building yesterday where they've set up an exhibit of Santas throughout history. I found it interesting and perhaps you will too. You can click for larger images. 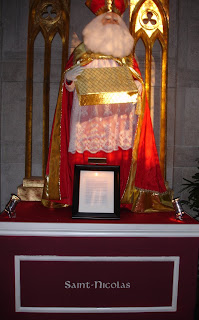 It started with Saint Nicholas, a real guy (unlike all the others here) who lived from 280-346AD. He became famous for his good deeds and miracles that he performed. 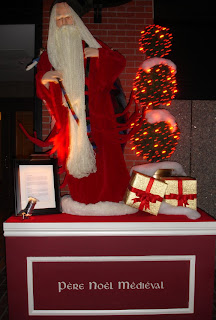 Medieval Santa, circa the 12th century. Lore has it that he walked from village to village with gifts and good cheer. 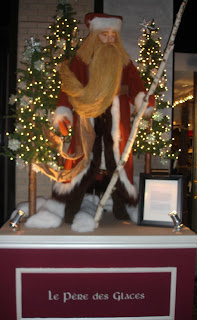 Father Ice hails from Siberia. The story goes that a young gentle girl was banished from her house to the Frozen Forest by her mean stepmother. As she began to freeze, a huge blizzard parted and Father Ice appeared. Impressed by her kind and humble nature, he showered her with diamonds. The wicked stepmother, upon learning this, sent her own daughter into the forest to reap the same benefits. But the ill-tempered, spoiled child disgusted Father Ice with her behaviour. He waved his arm and froze her for eternity. 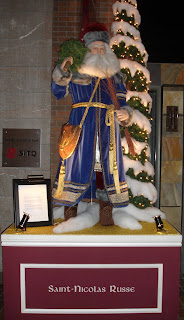 This is Russian Santa. He carries birch sticks to dole out punishment to bad children and carries a tree to symbolize the gifts he brings to good children. 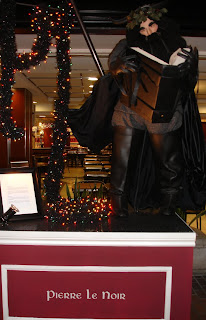 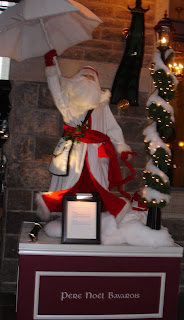 Bavarian Santa was thought of as a messenger. He took children's requests up to heaven and then descended to Earth using his umbrella and bearing gifts from the Angels to give to the children. So very Mary Poppins, eh? 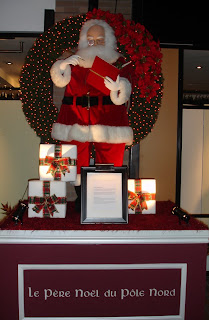 Today's Santa lives at the North Pole and rides a flying sleigh towed by eight reindeer. His elves toil away in his workshop and Santa carries a list of all the good and bad children. 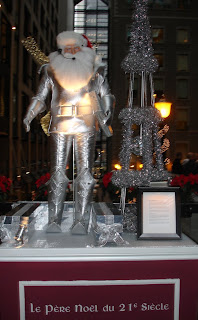 The next 21st century Santa has a cell phone to keep in touch with headquarters. A silver thermal flight suit keeps him warm for the midnight journey. He has a laptop with a computerized disc of nice children. I think of him as Disco Santa.
Posted by tornwordo at 5:48 AM

What a cool exhibit!

I liked the exhibit until the last one. Foil-wrapped Santa? I think not. Do you suppose that's what kids thought when 20th-century Santa first showed up in illustrations?

In the famous poem: A visit from Saint Nicholas; it referes to him as an elf and he has eight tiny reindeer. That would explain how he could get down the chimney.
I've never heard of Black Peter before but I think I'd like to see it. I would imagine it would be very large.
It is an interesting exhibit indeed! Ed

Russians are sure a dour lot, aren't they?

That last Santa scares me, no sitting on his lap for me!

The last one looks like he should have been running around with R2D2.

I think my fav is Father Ice. I know some folks I would like to shower with diamonds - and some I would love to turn into ice for eternity.

(I see Blooger is again trying to block out WordPress users!)

That 21 century Santa is scary. I like the modern techno-gadgets he has, though. Makes more sense than a long list on a scroll. My favorite is Black Peter, though. A new concept for me, but I have two almost-ten-year-olds who need a good lesson in negative consequences for bad behavior. I hope they would repent of their evil ways and experience the jovial side of ol' Pierre le Noir. Shoot, I wish they would repent of their evil ways and see the jovial side of Mommy and Daddy!

I'm going to delurk to ask if you've ever read David Sedaris's essay "Six to Eight Black Men." It's about his learning about Denmark's Santa, and it's hilarious. The six to eight black men refer to the, er, six to eight black men that Dutch Santa apparently travels with. From the essay, "[They] were characterized as personal slaves until the mid-1950s, when the political climate changed and it was decided that instead of being slaves they were just good friends. I think history has proved that something usually comes between slavery and friendship, a period of time marked not by cookies and quiet hours beside the fire but by bloodshed and mutual hostility."

It's in his book Dress Your Family in Corduroy and Denim.

As a Santa collector of sorts, I thoroughly enjoyed this post! I'm SO glad you brought your camera! I liked the Mary Poppins Santa, he has a nice sash.

Doesn't the current Santa come from the makers of CocaCola?

is it me or does the second one look a little Gandalf from Lord of the Rings?

And that uber gay Disco Santa rocks -- makes you wonder what he brings you if you're a really good boy
...

I don't care which one it is,but I DEFINITELY WANT MY PRESENTS from the old cooch.

Twenty-first century? The last Santa looks more like the tin-man from the Wizard of Oz -- only old.

That disco Santa reminds me of the shiny new world they envisioned in the 40's and 50's. Maybe he is related to the Jetsons.

I resent blogger making it hard on us WordPress types.

i gasped a little when i read your first sentence... down at the world trade center building. obviously there's more than one in the world. but it struck me. even after all this time.

the santas are beyond cool. :)

I enjoyed these pictures very much.

It was especially interesting to see Santa in various colors OTHER than red! Kinda refreshing.

I love the severity of the Siberian Santa story. What is it with Russia and their extremes? You either get diamonds or frozen to death, beat with a stick or greeted with a xmas tree.

When I think Disco Santa I think red polyester leisure suit with black platform shoes, aviator sunglasses, and some rather fierce sideburns/mutton chops.

The silver thermal suit reminds me more of one of the extra dancers in the early 80s Michael Jackson 3D short Captain EO.

I think I'd refer to him more as "Smooth Criminal Santa" or possibly (going a different direction with this)... "Bad 50s Sci-Fi Santa"

Either way, thanks for sharing the photos and the info!

Very interesting. Thanks for sharing this with us.

It's amazing to see the evolution of Saint Nicholas into a mythical creature we know as Santa Claus or simplyh Santa.

That 21st Century Santa is a little bit scary though. He looks more like a knight than a saint.

Like those flying cars promised so long ago, this one is also way off.

What a wonderful exhibit, thanks for taking the time to take photos and share; I especially like the Bavarian Santa.

I read a book a few years ago that was quite interesting. You might see if you can find it at your library or through Amazon or ebay. It was called, "When Santa Was a Shaman", and was similar to your post here, a history of The Old Elf.

Local Xmas Parade is here tomorrow.
Have a good weekend, torn and readers.

This post almost got me into the Christmas spirit--almost!