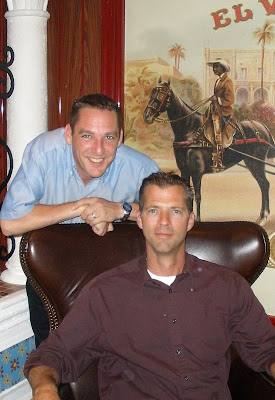 Nearly every night on the boat, we spent time in the Habana Bar where this great jazz trio played. I'm going to buy their cd. Have a listen to a song of theirs. Jane on the keyboard blew my mind. 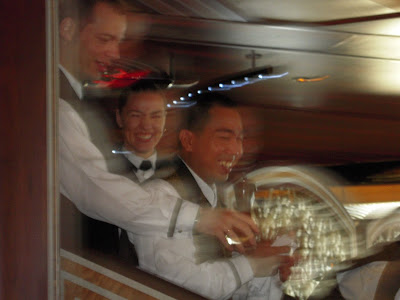 Ulla and Ugede (sounds like ooh-gay-day which I loved) our dining room team waiters were so fun. They had to do corny dances at the end of the dining period and I was kind of embarrassed for them. But they made us feel like family, and that my friends is the secret to success. 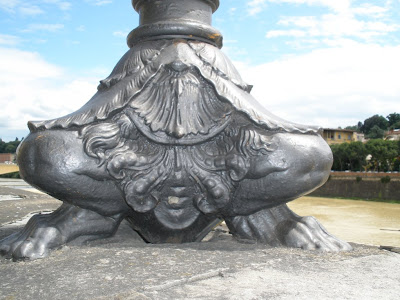 The bottoms of lampposts along the Arno river in Florence. It seemed that everywhere we looked, there were interesting details to be observed. 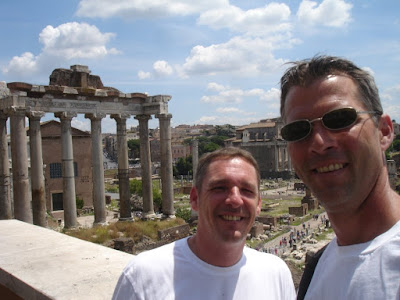 The ruins in Rome were so eerie. I kept imagining it glisteningly whole and filled with toga clad people. 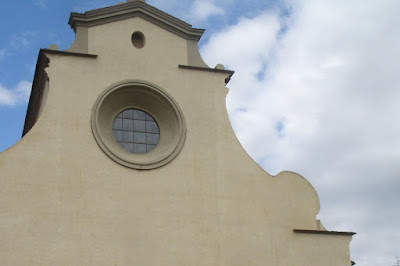 A church in Florence. (I should know the name but I don't. I could probably find it on a map though. We had lunch at the little square there.) 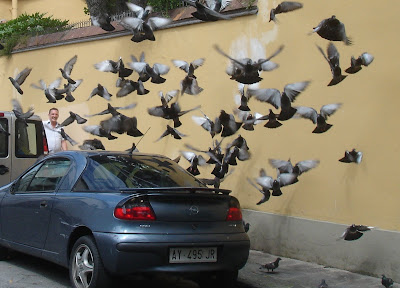 Several things were common to all the cities we visited. Pigeons and graffiti and naked statues among them. I'll have you know that it's a flight of pigeons, not a flock. 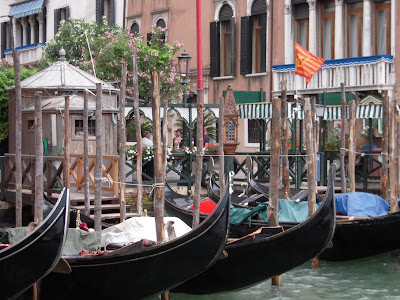 So many pictures of Venice. Here look at the pretty gondolas. 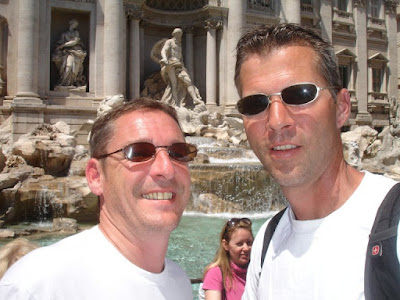 At the famous Trevi Fountain, we didn't throw a coin in. It was mobbed with tourists squirming their way down to throw one over their shoulder. 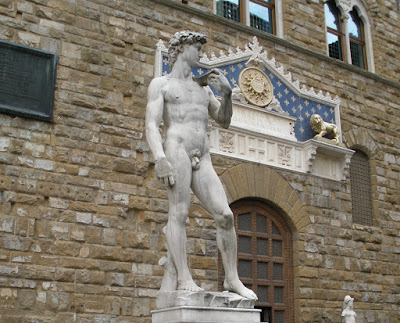 The most famous penis of them all, David. But oh my they were everywhere. In Pompeii, there were stones with penises carved into them on the street indicating the way to the brothel. There were all kinds of penis souvenirs at the stands outside the entrance. I may or may not have bought one. 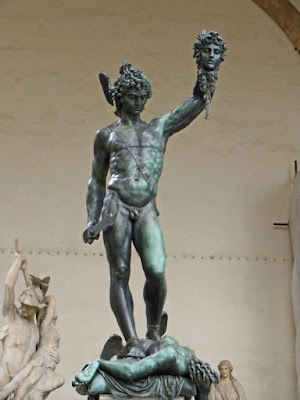 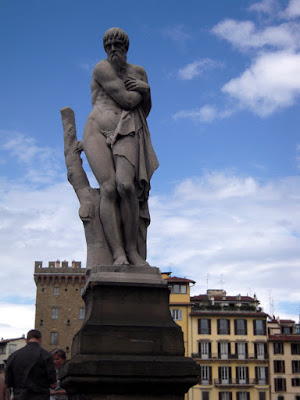 Penis, but it looks like a woman from the hips down. 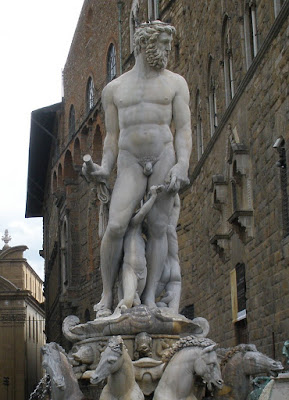 Penis, plus little boy penises clustered around below. I just don't see that flying in America. 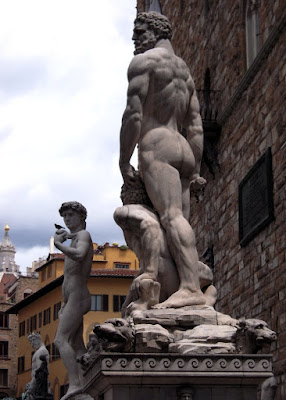 Grrrrrrrr. I think his penis is in the young man's hair. This ends the penis statue cavalcade. And I didn't even show you the one on the Arc de Triomphe and the one where one guy is rubbing his on another man's thigh. (came out blurry) 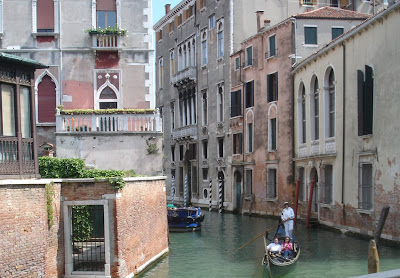 God Venice was beautiful, wasn't it? 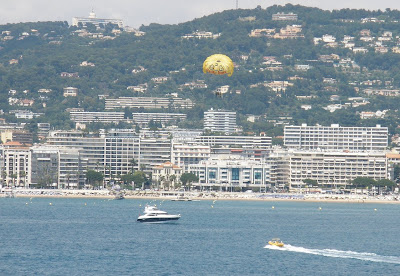 Oh right we went to Cannes too. There were many overly tanned people there. 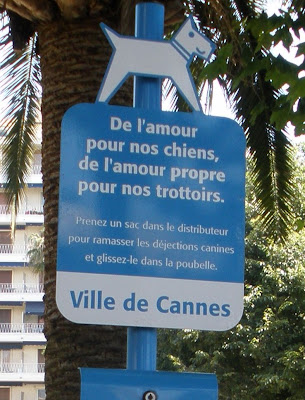 They are serious about dog poop though. 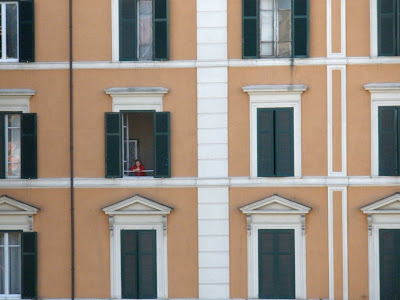 Finally, a Lady in Rome.
Posted by tornwordo at 6:14 PM

I'm going to go and get a coffee now and pretend I'm seeing fabulous sites like you are sharing.

What a great trip! Thanks for sharing the pics, I could look at them all day.

more great pictures! Sure glad I had my Tim's here beside me to make the experience complete!

I really like that first picture of you and Serge.

I like that translation for dog poop. "Les dejections canines"

Excellent photos. We really must go back someday.

Penises on parade!! Blurry, huh? Sounds like that statue was kinda getting to you!

No surprise, another delightful array of photos from the trip!

Happy Summer to you both!

Greg stole my penis on parade comment! It's not surprising that Europeans as so much less uptight than North Americans, as a whole. They digest the beauty of the naked body since birth.

I want to know what penis souvenir you bought?

Those Venetian pictures are so beautiful.

The Ringling Art Museum in Sarasota has a bronze replica of the statue of David in its courtyard. It's over ten feet tall. That is the first penis I ever saw, standing spellbound before it. One never forgets the first one.

Lovely shots! My daughter has some great shots of the Trevi fountain and the ruins. She didn't take many penis shots though. That I know of.
-Rox

Penis-shots always bring a smile to my face, even when it is a stone penis.

I'm loving your trip rundown. That pic of the *flight* of pigeons is wonderful. I wish I lived in a country where little boy penises could be put on statuarial display because it's no big deal. sigh.

You're so right about much of the statuary in your photos not flying in the U.S. It might work in Canada though. It just seems that in Europe they're just so comfortable with the body. And you can't for a moment tell me that the sculptors who did the penis statues wasn't gay. The guys are, how shall we put this, rather handsome.

I wonder why we have so many religious wingnuts in this country. Lest we not forget that John Ashcroft actually had the nude statues in the Justice Department covered with drapery.

I'm one of those people who consider the human body fascinating in all forms. It makes for very interesting art.

That picture of the statue where the male looks female from the hips down is "Hermaphrodite", of course. (heh heh) OK ... I'll go back to my corner for awhile. ;-)

No, here in America you would never find a display of artistic penises, but we are controlled by so many DICKS!

I was hoping you'd make it to Venice. I remember a friend who went there came back forever changed. It is an incredible place.

Awesome photos, Torn. Thanks for sharing so many.

Who knew Europe was so big on the penis? I'll be disappointed if you didn't buy at least one penis souvenir!