I guess I'm not disappearing altogether. The proof? I'm sitting here getting ready to post something. That's because shit's happening, and when that is the case, I want to post. So. No I told you so's please. Thank you. First up Serge and Georgie sleeping on the sofa because the one day it was REALLY important for me to sleep, Serge mucked it all up dreaming about something and pawing me in the middle of the night. Then snoring like a mack truck. Ugh. Banished to the sofa the following day. 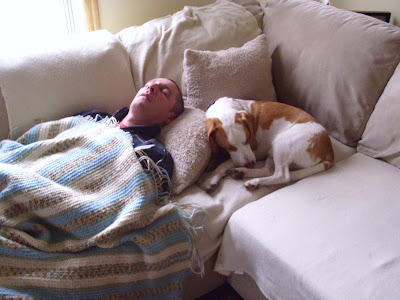 The thing that happened is that last week in the middle of the night, Serge woke up and his arm didn't work anymore. He tried to wake me, but apparently I was unwakeable, so he took a taxi to the emergency room and got some "care". I put that in quotes because the doctor told him he had "trucker's arm" and bound it with a cast and splint thing and told him to come back in ten days. Basically he was told that it would probably just go away on its own. Well, no. Since it was his right arm and he's right handed, everything became a chore. Not least of which was ass wiping. Writing, cooking, using a mouse, everything was difficult. So he went to see a physical therapist. But since he didn't have a doctor's referral, he had to pay. I don't think he should have to pay and hopefully he will not be spineless and complain to the doctor when he sees him again on Thursday. His problem is this: He can't tilt his hand upward, and he has difficulty raising his arm as well. The camera was brain farting when I took this shot, but he looks like a person with MS when he tries to pick up an ordinary glass of water. 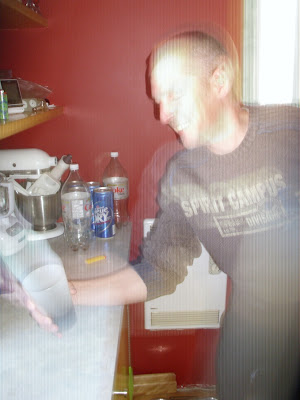 That's it. He can't lift it any more and if he wants to drink it, he has to tilt his head down or use his other hand. I keep teasing him and telling him that I didn't sign up for life with a cripple. Mom told me to remember the "for better or for worse" part of the nuptials. I said, yeah, but we never promised to LIKE it. God I hope it gets better but it has only improved slightly in 9 days time. Fingers crossed for poor Sergie. 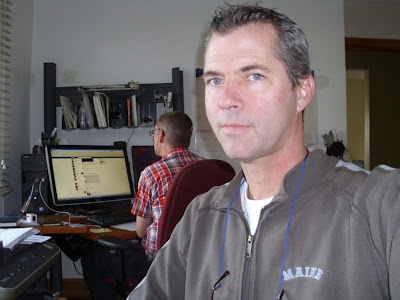 In other news, we've both succumbed to the reading glasses needing to be nearby all the time. I brought home a cord for me and Serge jumped on that so fast that I had to go buy another one for myself. Now we look like old men with our reading glasses hanging from our necks. This was one of the defining memories of the fabulous Europe trip. I finally gave in and had to use my glasses all the time. I kept declaring, "They've made all the maps smaller with finer print! How are we supposed to read this thing?" Then put on the glasses and all was miraculously well. 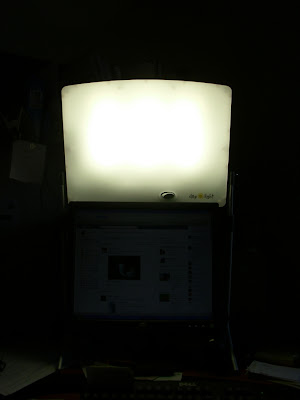 On the latest acquisition front, I got my sun box. I use it each morning as I'm going through the updates on the computer. 30 minutes a day and man that light is bright. The last two winters were really rough on me and I was sad and depressed for no reason on many days. Vitamin D supplements didn't do the trick so sun box it is. I'll let you know how that goes. 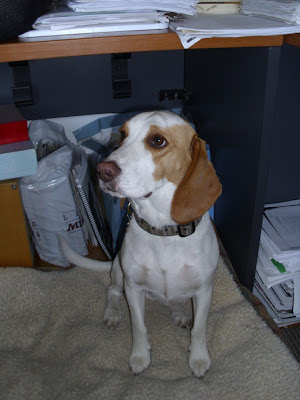 Finally, our Georgie boy who we have entered in the FIDO contest. FIDO is a cell phone company up here and they are doing a contest for doing a doggie commercial. If you want to help Georgie get into the top ten (He's gone from 8000th to 4500th already) then place your vote! You can vote once a day until the 17th. Ruff!  Click HERE and vote!!!!
Posted by tornwordo at 4:39 PM

Hahahaha! I caught you on your stealth post. And that's only really funny because I haven't been around for a bit....and this is a stealth COMMENT!

Likewise for Serge's arm. I'd wonder if repetitive motion isn't partly to blame - David's had a lot of arm & shoulder issues from spending hours a day working with the computer mouse - but it still sounds scary. In my experience, most physicians need patients to stand up to them and tell them to stop being lazy fucks when it comes to diagnostics.

Voted. How could I not support that gorgeous boy?

Very sorry for the issue Serge is having with his arm! I hope it steadily (and quickly) goes away! But hey, at least it let you get a poop reference into the first post of your return!

So glad you are in my reader so when you post I know about it. Holding you all in the light. (I know that sounds all new ageie and stuff and I am not that way but everybody says "I am praying for you." I just want you to know that I am thinking good thoughts for you and hope things get better.

Oh, poor Serge!
Good luck Georgie!
Glasses on a string! Don't worry, before too long you'll need your glasses on to walk around, so you won't need the string any more.

OMG Tell Serge to get his ass back in there and be a pain until they figure out what's wrong! That's bullshit. It might be something as simple as a pinched nerve but what if it's a tumor?! (That was probably the wrong thing for me to say...)
I just lift my glasses up to see up close. I'm having to do it more and more. Old age sucks, but it beats the alternative.
The sun light, is it a prescription one? My therapist told me once that you have to get the prescription ones, the other ones don't work as well. And also, you have to keep your glasses off because (according to her) the seratonin comes in through your eyeballs. I put my snowsuit on and bundle right up on the sunny days and I'll sit out there for ages just to get the happy. We have snow now, so let the depression begin. HAHA!

Poor Serge, I hope he gets better.

I want desperately to make a joke here about Trucker's Arm and a certain sexual practice, but I know this is a family blog, so I will forbear.

I feel bad for Serge (and you). The doc seems a little lame in his reasoning and diagonsis. If he can get a 2nd opinion, I say do it!

Of course, the you not waking up thing didn't sit well either. That can't be good.

You know I voted for Georgie. He always has my vote.

get well soon, serge! I don't know how much more arsewiping torn can take!

Wow, 9 days is a long time to deal with a debilitating situation like Serge has! (for him AND for you).

So sorry to hear this news, but glad you posted, so that we, your faithful Readers, can send Serge & you good JuJu.

You're in your mid-40s, right? That's about the time my eyes started going all flooey, during the Phantom tour. I've worn contacts for many years but had to shift to "MonoVision", i.e. different prescriptions in each eye.

And NOW...in mid-late 50s, I've gotten to the point where I have to wear my regular glasses in order to see the music clearly on gigs.

It's better to be able to see with glasses than look fabulous and be blind. ;-)

Yeah, I succumbed to regular glasses at 45. It took only three more years to need progressive lenses. But at least I can see.

I'm worried for Serge. It may be nerve damage, maybe related to computer work. My iPhone has saved my neck, which was beginning to pinch a nerve from all the time I spent at the computer. I have to be very careful how I sit at the keyboard and I have to get up every 20 minutes to change position. Serge needs to check with a physical therapist.

Keep reminding us to vote on Facebook! I do it every time I see cute Georgie.

Sorry to hear about Serge. I hope it all clears up soon.

Poor Serge - I hope his arm gets better soon (shame on you for being "unwakeable" in his moment of need, lol).

I have been removing my glasses more often in order to read small print. And then muttering to myself when it happens. Getting old is not fun. I think that I am going to have to get the bifocals soon.

Glad to see you're back with some cool pics. Sorry to hear about Serge's arm!

Serge: Best wishes for a full and speedy recovery. If you have to, pitch a fit and insist on a consultation by an orthopedist and/or a neurologist.

Torn & Serge: For once, I'm glad my eyes no longer produce enough moisture to wear contacts. Progressive lenses mean never having to wear my glasses on a string!

And I'm even more glad I saw this in time to vote for Georgie!!

I'm with Rox. Make a fuss to get the doctors to really look into the problem. I'm concerned about him. Please post an update when you guys know more.

I am not posting very often anymore, either, but with the recent unpleasantness with Diva it feels better to post about it. She assaulted me in late September and has been in "juvie" for the past six weeks. Came home yesterday. Weird.

Sorry to hear about Serge and hope his arm is doing better.

I'll keep checking in for updates (you can't end the blog without letting us know what became of his arm, torn!).

I hope Serge's arm is better by now. Good luck to Georgie. What was the result?
I loved all the vacation shots on the previous post. Sorry to see you're no longer blogging but seems to be the trend. Good luck and happy holidays!