So sorry to have been remiss in my blog duties, but it's summertime, time to shirk responsibility and rejoice in the warmth. Which is what I've been doing. Well, except for the working part. As I mentioned before, I landed a summer contract to teach those on unemployment whose lack of English communication skills were ostensibly the last obstacle for them to find a job. Well I can tell you it certainly isn't the only obstacle. I started calling them my Welcome Back Kotter class. I just received their evaluation of the course from them which they fill out in an anonymous format. While most of the evaluation and comments were positive, there were a couple that just gobsmacked me. Here I'll show you one:

Um, racist much? I didn't have much trouble divining who had written such a thing. Sadly, such attitudes persist in every corner of the globe. That said, I did have a few bizarre moments in the class, most notably when, let's call him Mutlag, looked at me and chortled, "You don't really believe the holocaust actually happened, do you?" I had to affirm that yes, yes I did. Thankfully, we left it at that. Anyway, it was an interesting experience spending nine weeks with them all day every day.

Once the contract finished, it was time to travel and have fun. First up was New York City, a family vacation to celebrate my stepdad's 75th birthday. 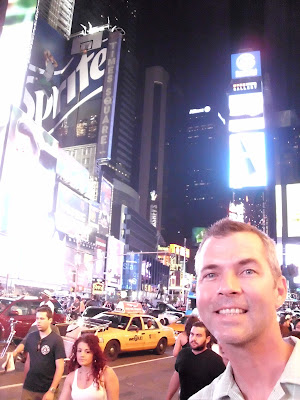 We stayed right on Time's Square and each morning I could hear the screaming from the crowd outside the Good Morning America studios. Too. Many. People. Luckily, there was a subway stop nearby to whisk us away to other parts of the city. We dined like kings thanks to the parental units and saw Cirque du Soleil's Zarkana, a show that will move to Las Vegas and replace the Elvis show there. At least I've heard so. 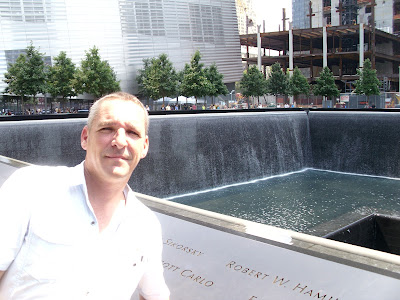 We also scored some off broadway tickets to Forbidden Broadway, a musical that spoofs all the other musicals on Broadway. We made a rather somber tour of the 9/11 memorial which was pretty impressive. The security screening was quite rigorous. Another neat thing we did was tour the Space museum where we got to see the space shuttle up close (though sadly we weren't able to go IN the shuttle) but we couldn't get a good picture because it's too dang big. This one was cool from the exhibit inside though: 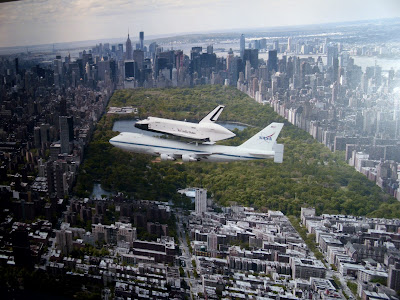 One thing I noticed in NYC that really irritated me was that there were no recycling bins anywhere! I'm so used to Montreal now where there are always two sides to the garbage bin, one side for mixed recyclables and the other for true garbage. C'mon New Yorkers, get with the program. 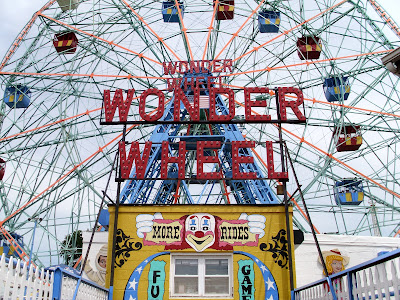 Serge and I also went to Brooklyn on the free ferry to Ikea and tripped around the Red Hook neighborhood. Also, we took the subway out to Coney Island, a place I've wanted to visit since I was a kid. It was kinda sad and run down although it looked like they were embarking on a major renovation of the site. If you are friends with me on Facebook, you already saw lots of family shots on the trip. (Rox please get back on FB) A great trip despite the oppressive heat.

Next trip was my Vegas junket with my Vegas Junket Buddy. We spent four days playing and eating and seeing another Cirque show, Zumanity. VJB and I didn't take any pictures dangit. I've only had one other trip like this where it seemed I just couldn't lose. So much fun to put twenty bucks in and take a hundred out of a machine. And this happened several times. I think I spent a total of $300 and that includes taking VJB out to the show. Zumanity was great because it was Cirque's X-rated show, 18 and over only. It was hilarious and dirty and filled with acrobatics too. Hard to explain, but definitely worth the detour.

The day after I got back from Vegas, we jumped in the car with Andy and drove down to Boston to our friends' place. Oh my but did we drink that first night. I didn't go to bed until 4 in the morning. (!) The reason we went down there is because we had planned a weekend in Provincetown. We wanted to break the drive up so we wouldn't have to do the 9 hours all at once. 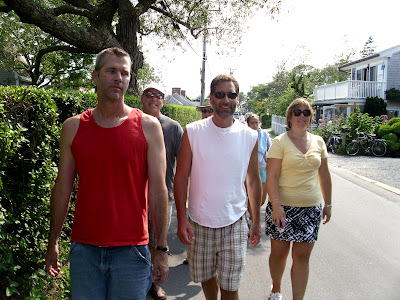 I was SOOOOOO hungover. Andy said I didn't look it, but I can sure see it here. The weather was nice that day and we nursed hangovers at the bar and had a fancy schmancy dinner at 10pm. The next day was kinda sucky weather-wise. We went on a walk that ended up taking us three hours to complete. And we had parted with no food or water. Lame. Then we went into town and toured the big monument commemorating the Mayflower's stopping point before they finally settled on Plymouth as the settlement choice. 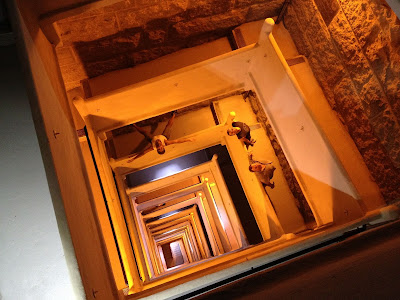 We climbed all the way to the top. When we got home, Serge mapped our travels on foot that day. We had done 8 miles plus the tower, much of it on sand. Boy were our legs noodly the next day. 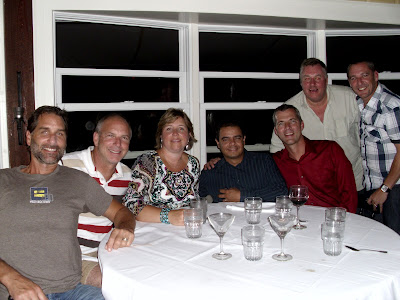 The last night we had another fancy dinner and crashed pretty early. Spent another day at our friends' place before driving home Monday.

And we are all caught up now. It's been a pretty hot summer, probably the hottest since I've lived here but we seem to be over the hump now, mornings are cool again. I was supposed to start a new contract this week but that has been put on hold so now I find myself with two unexpected weeks off. What to do, what to do. Stay tuned for that.
Posted by tornwordo at 10:07 AM

I had seen pictures on Facebook but your narration makes it more real for me. Thanks, Hugs to Georgie.

OMG, I'm horrified to hear that you had to teach a knuckle-dragging mouth-breather earlier this summer. I know they're everywhere, not just here, but it always catches me off guard when I hear about it.

Fortunately, your travels more than made up for it. I'm envious of your "staycation" portion as well as your extensive travel. Can't wait to hear what you have planned in lieu of that teaching gig that got cancelled at the last minute.

Sounds like lots of fun (well, except for some of your students). At least you and Serge got to see one spaceship Enterprise this year! (I'm sure you'll see Capt. Kirk's the next time you hit D.C.)

And what was Georgie doing during all this? Learning to water ski? Running for office? Competing on "Canada's Got Talent"?

I'll never be a Facebooker again, therefore it is critical that you continue to blog, even if it's only when you travel! :)

Your VJB, was that RS? How is VJB doing?!

My kid wants to go to NY so badly, I'm wondering when a good time of the year would be to go where there AREN'T 400 billion people running around Times Square?!

If I ate at 10 PM, I'd be up all night with weird dreams/indigestion/heartburn. Six PM is standard. I'll never be fancy.

Always good to hear from you! Hey, where's Georgie?

I could visit NYC every month and never see it all. Now that I know where I can afford to stay (West Side YMCA), I'm going to plan some more trips there. Dotter is intrigued too.

I have to say that the camera just loves you. My sister's like that too. Me? Not so much. :)

Glad you had such a nice day! Looks a lot better than the cirque du soleil knockoff I saw last summer.