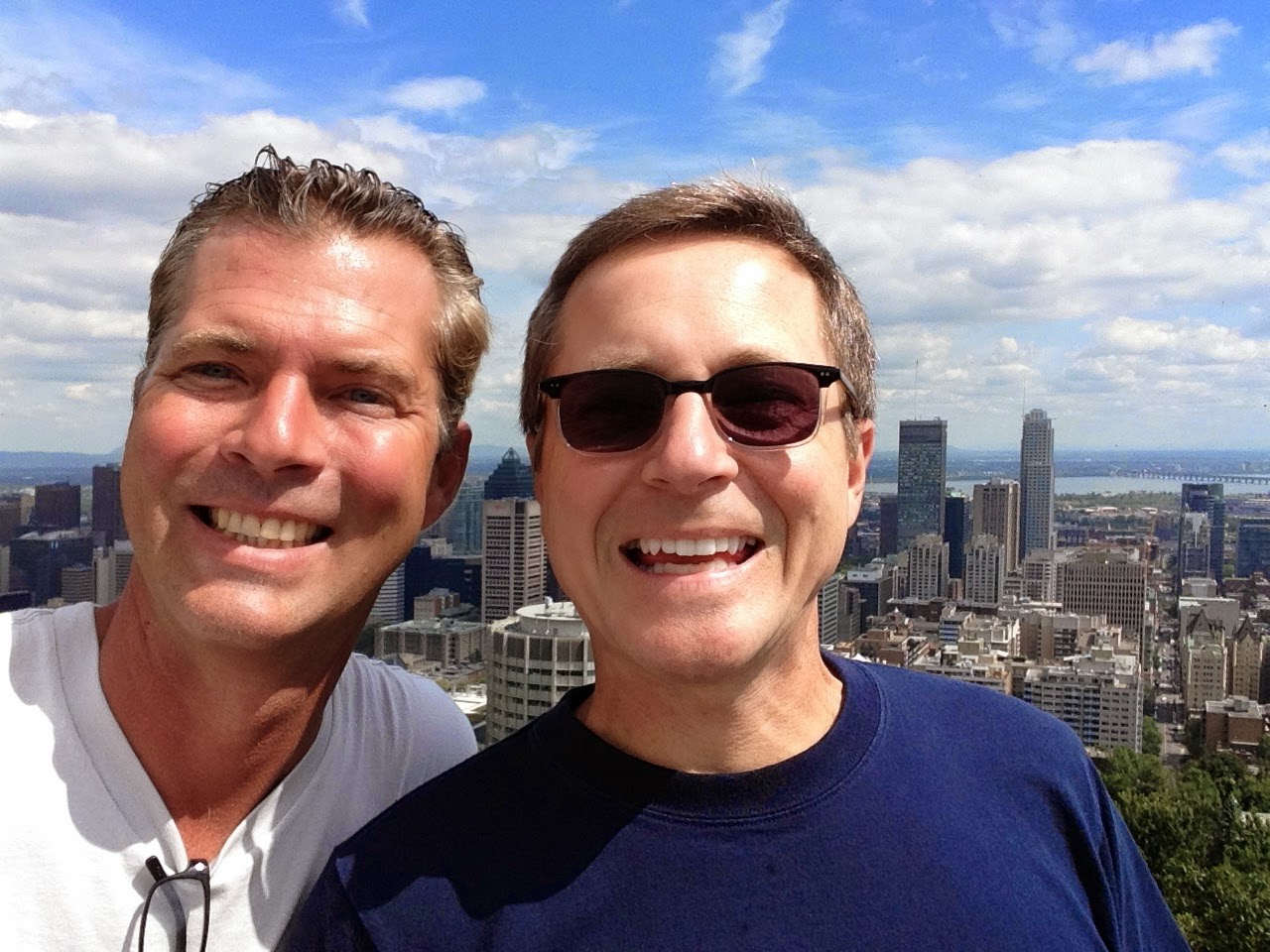 So the very next day after I came home from being out west for nearly a month, Tom came to town with his husband and two other couples whom I didn't know. They had come up to do an Iron Man competition, which, when I heard what that entailed, made me quite certain that I will never do one. I don't think I could do even one part of it. Anyway, it turned out to be just the most wonderful day. I asked Serge if he would come as we met up for breakfast in old Montreal so he did, but instead of heading back home after, he tagged along all day as we hit the main sights around town. It was just one of those weird happy chemistry things and we hung out the whole day and evening together. What fun. 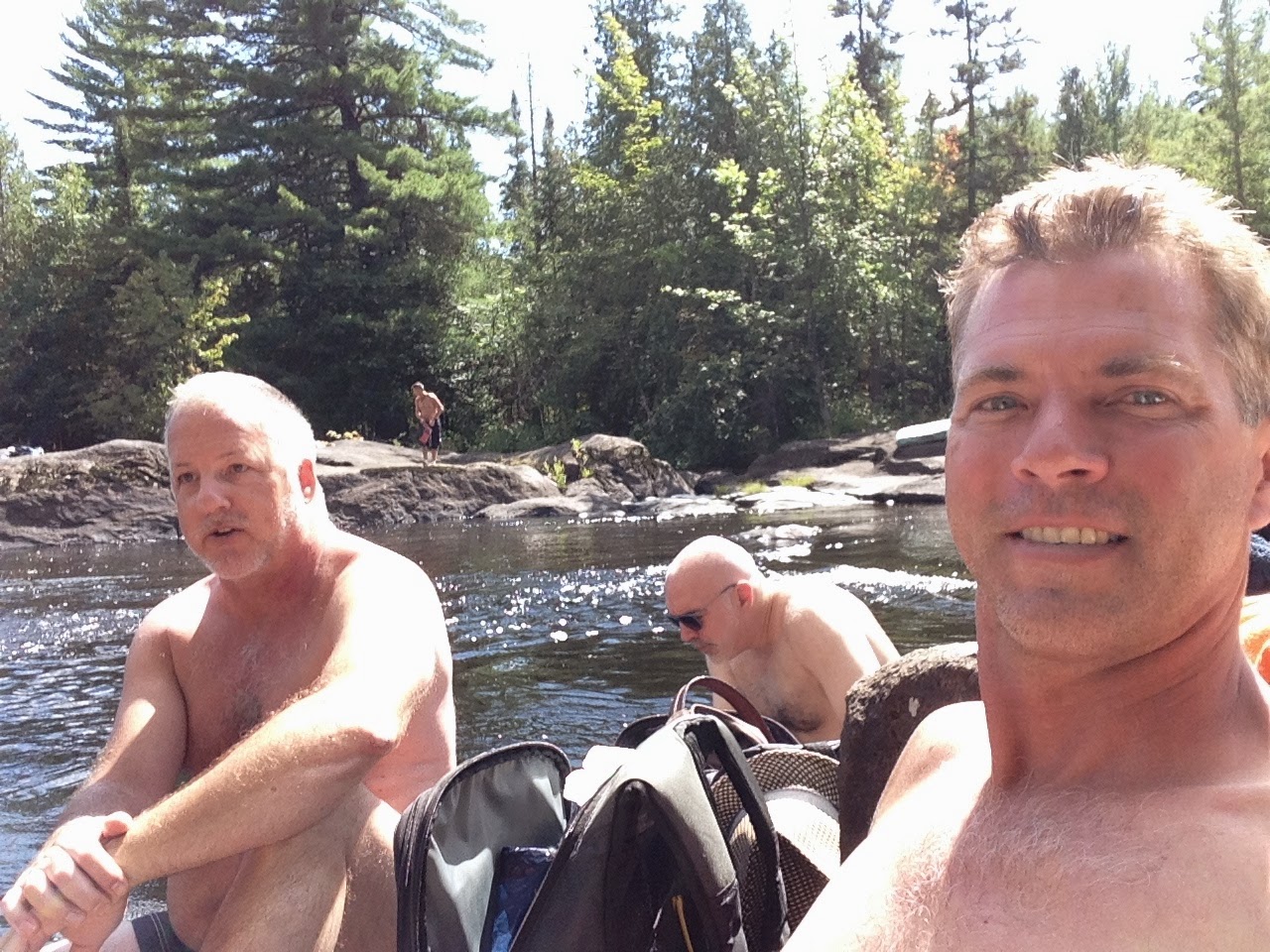 The next weekend we were invited by our new friends to go out to the woods for a hike up to a gay nudist spot on a river. It was wonderful being out in nature and watching people. Serge and I didn't go nude and it seemed like none of the guys we wanted to see nude were nude and all the ones we didn't were. We also noticed the first yellowing leaves and August wasn't even over yet. 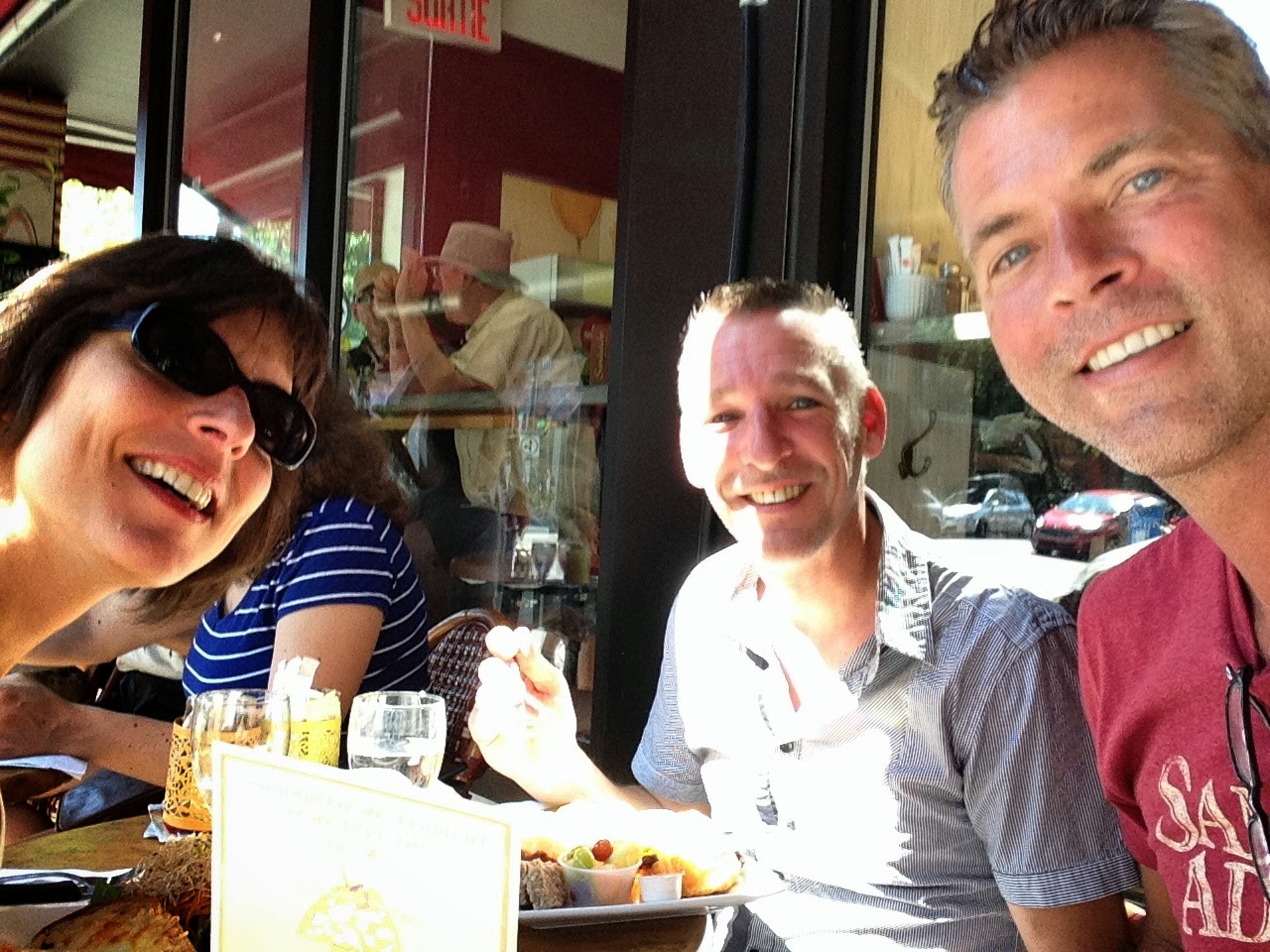 We met up with some friends for brunch for what would turn out to be our last meal in Montreal on a restaurant terrace. The summer seems to have ended so abruptly and although I can remember it being hot here in September, it is downright chilly this year. 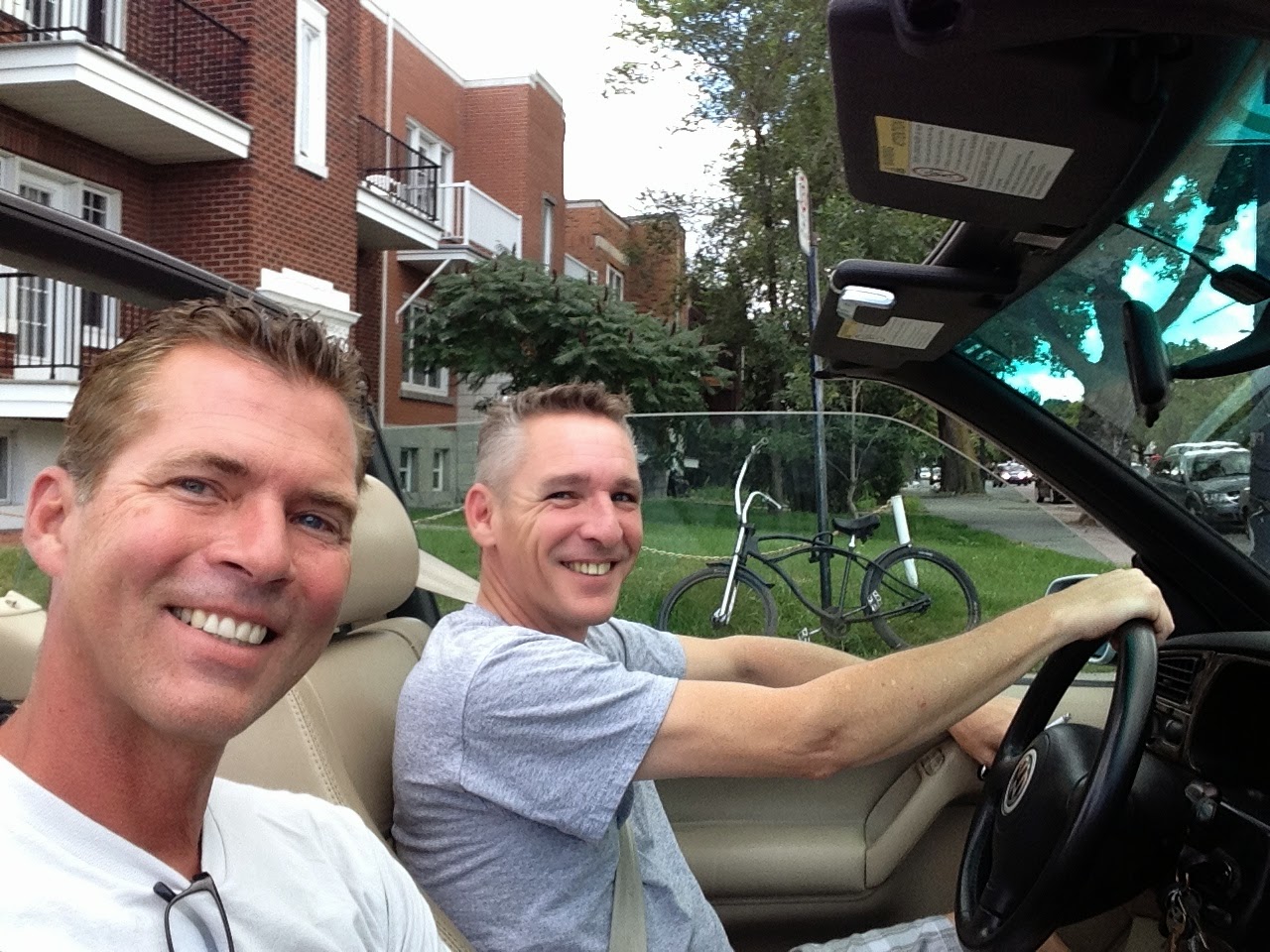 It was Camp Camp week but we bowed out this year due to what were our best gay friends in the world completely severing all contact of any kind with us. We didn't want to spend a week of feeling uncomfortable and it turned out to be the right decision and you'll see why later. Instead of Camp Camp, we planned a long weekend getaway to Ogunquit, Maine with a gay couple who we have never travelled with before. You know that is always a dicey situation, people change sometimes when travelling but it turned out just great. 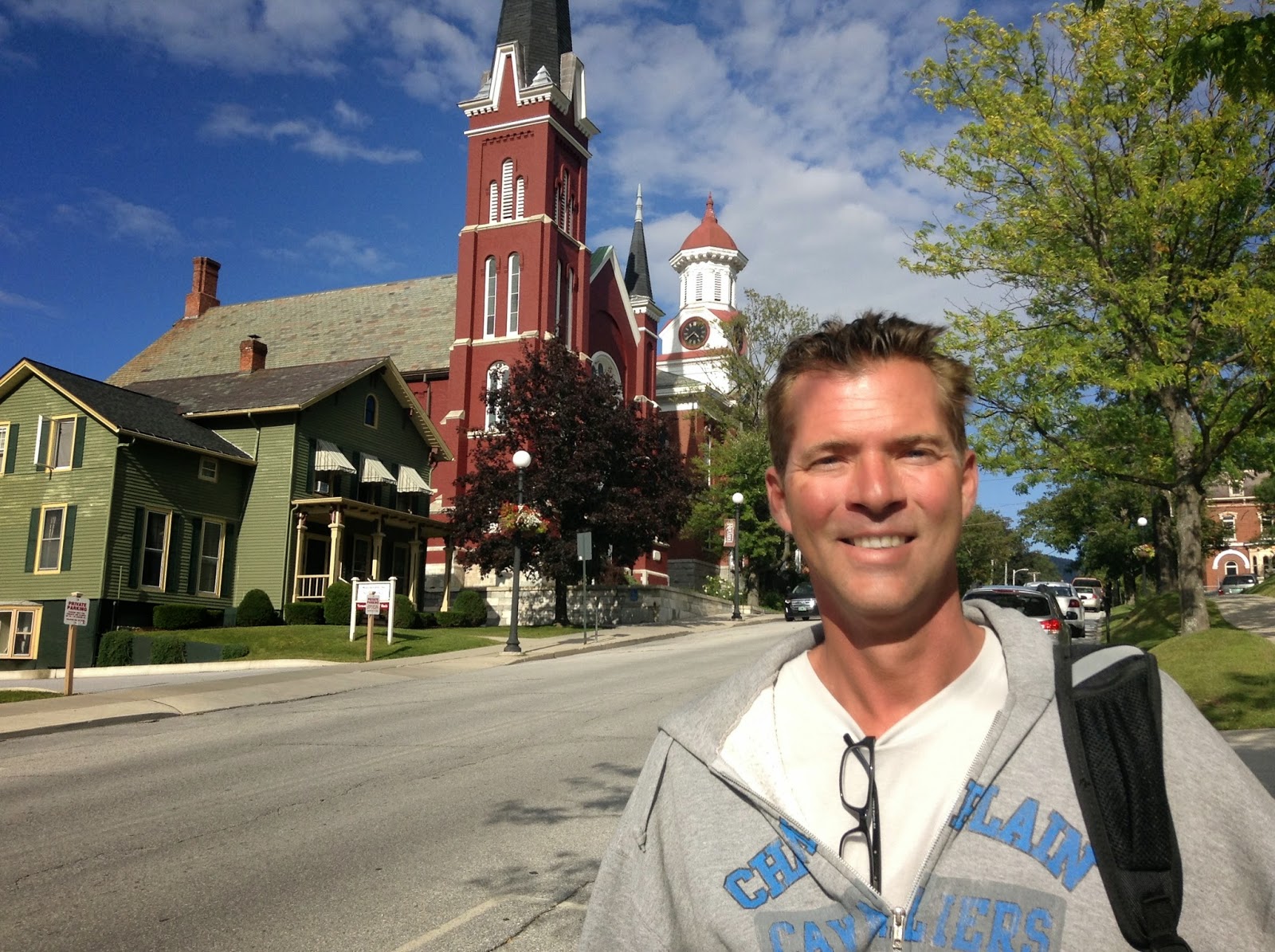 We decided to split the drive up in two and scored a nice little hotel in Rutland, Vermont. I love visiting any kind of new place and the town was a charming little hamlet in the hills. We walked around and Serge bought a coat since it was cold, something we didn't think possible in August. 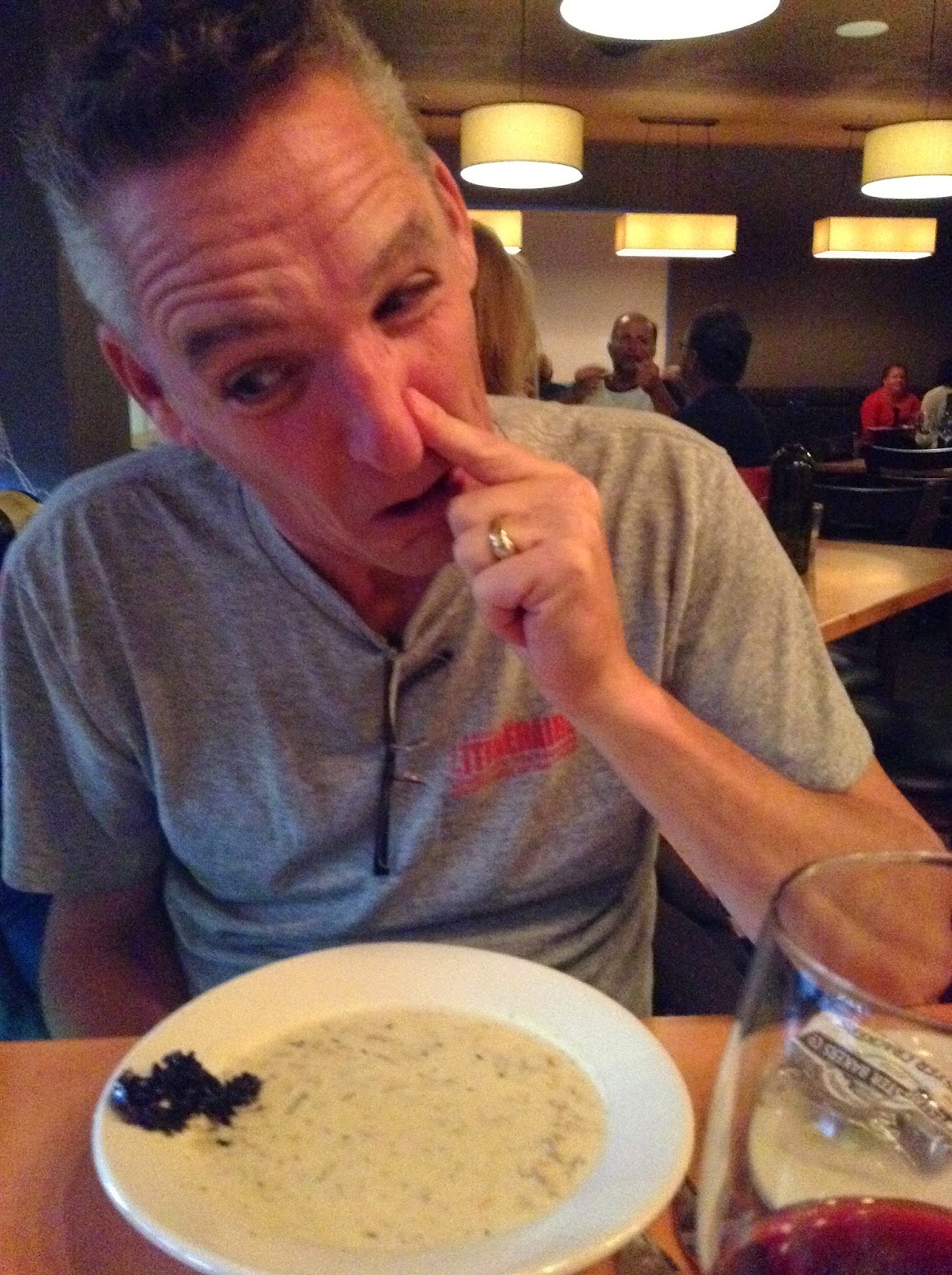 We bar-hopped for happy hour and met some of the colorful locals who recommended the restaurant just behind our hotel. Here is Serge being his tipsy self as he demonstrated what he thought that looked like on his bowl. It was a very yummy dinner with a nice bottle of Shiraz to go with. 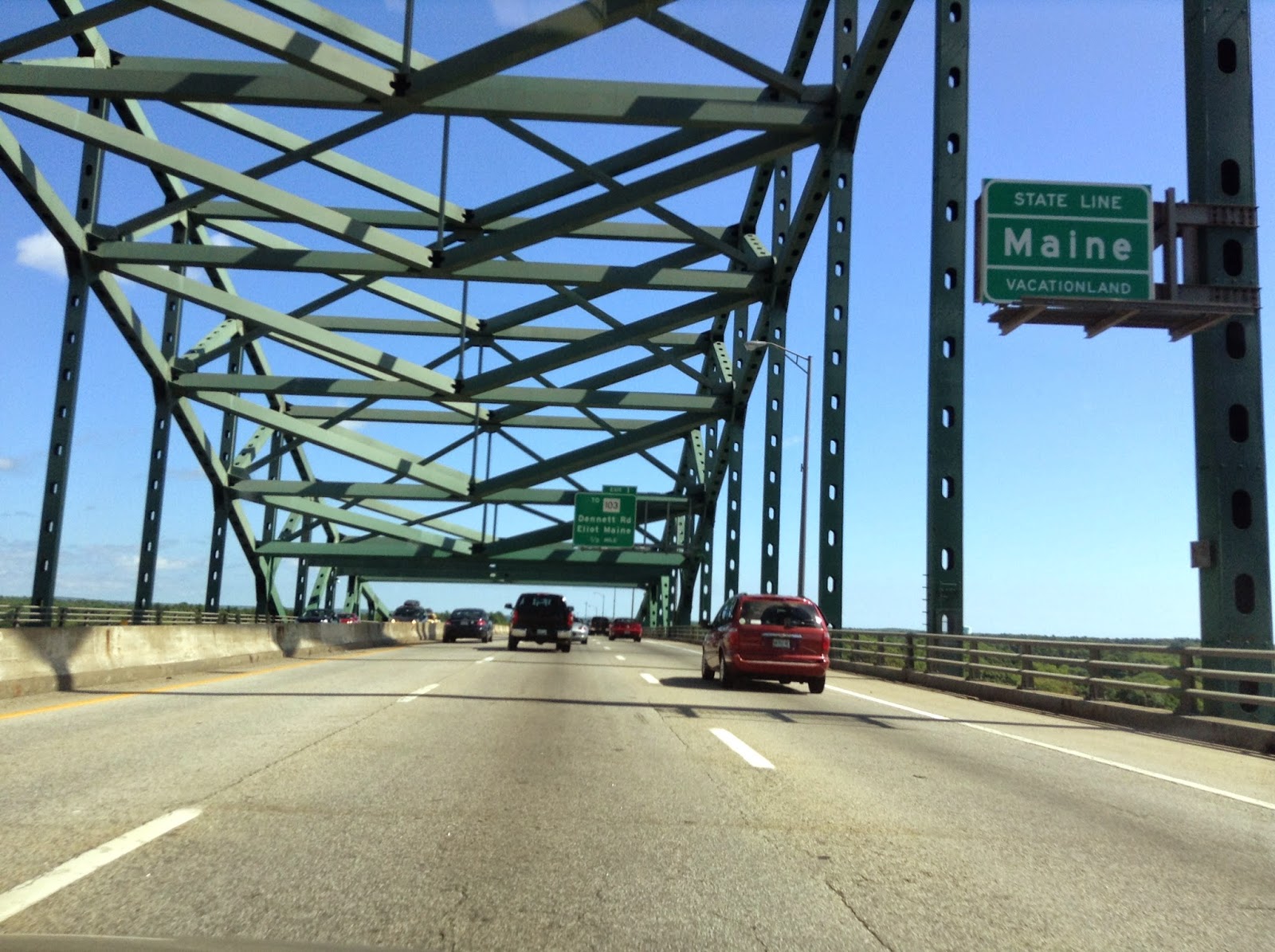 We drove through Vermont and New Hampshire and discovered beautiful little villages that we would like to return to for ski season. The area around Woodstock, VT is just amazing and Serge and I sang show tunes and gawked at the beautiful scenery. Then we made it to Maine. 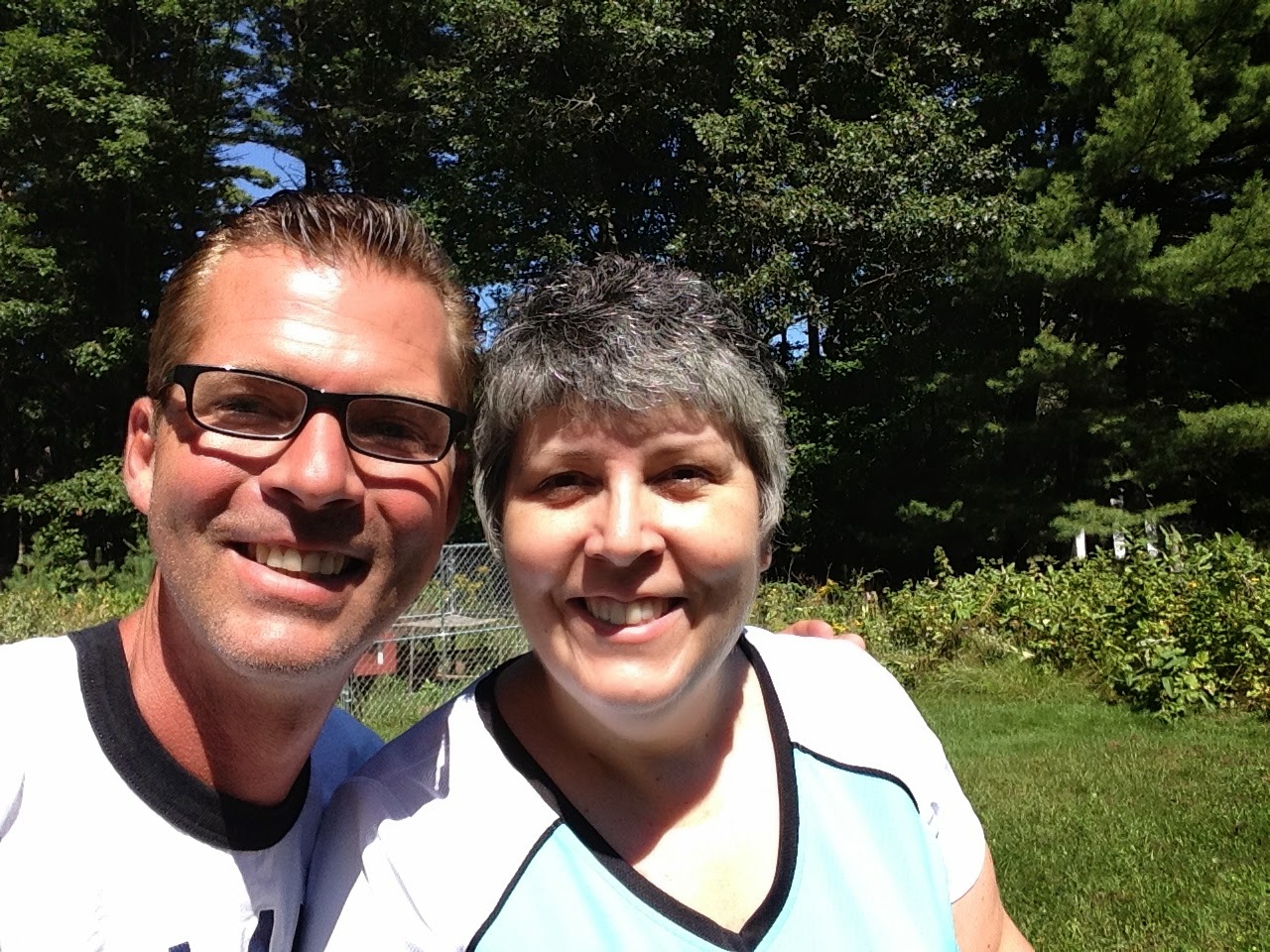 We had some time to kill since the hotel didn't quite have the room ready and our friends were meeting us later on so it was blogger meet-up time! Finally got to meet Colleen. She is the saintly person who sent us the chocolate covered potato chips last year. We hung out and shot the shit for a couple of hours. 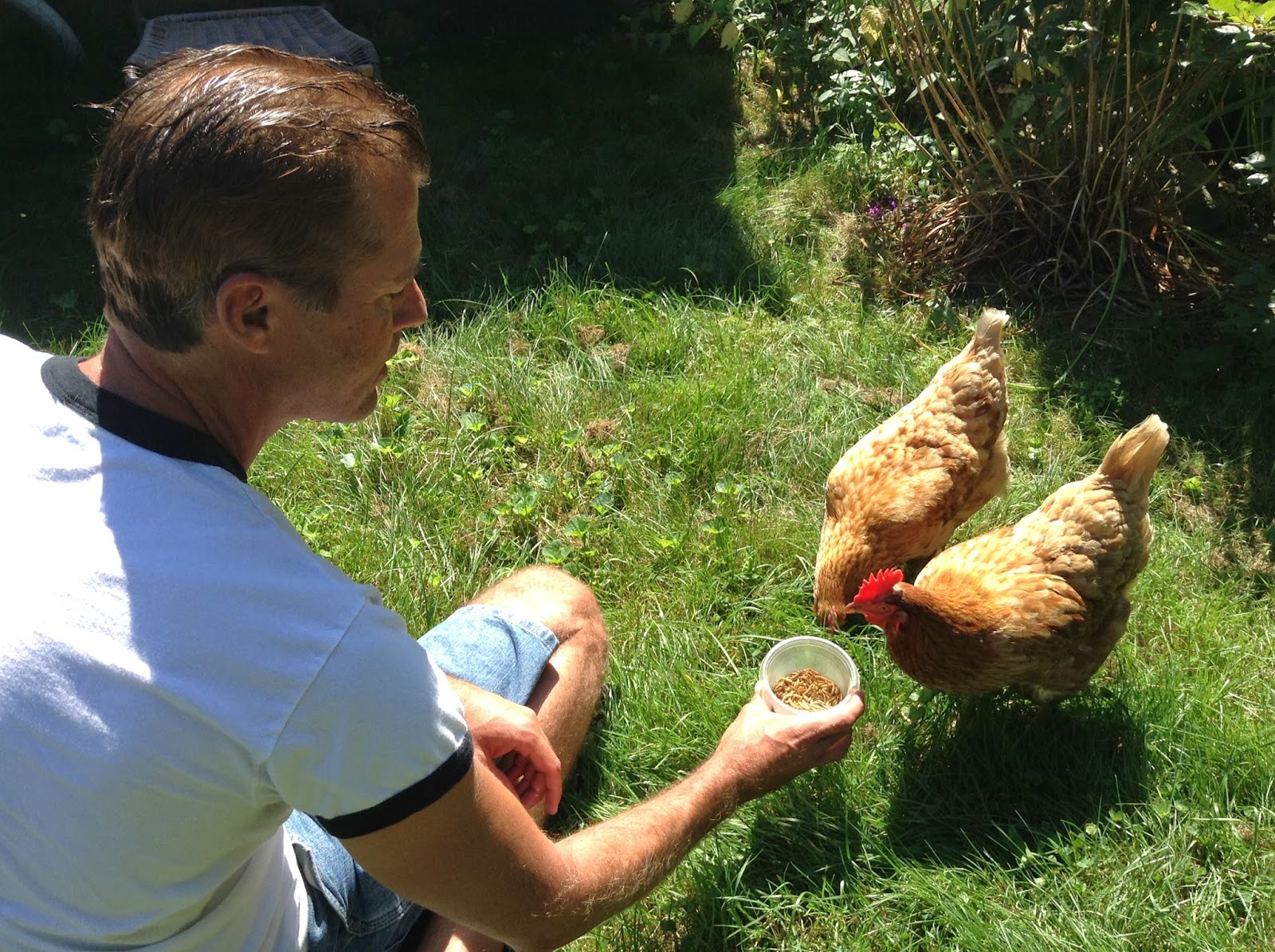 And we got to meet the girlies! The more I hang out with chickens, the more I find them adorable. Serge confessed that he is scared of them but only after we left. I had a pet rooster when I was a kid and that thing scared the crap out of me, but chickens are so docile, it's not the same. And omg my hair is thinning! Most people won't notice though since I pretty much tower over everyone else. Well except when I am sitting. 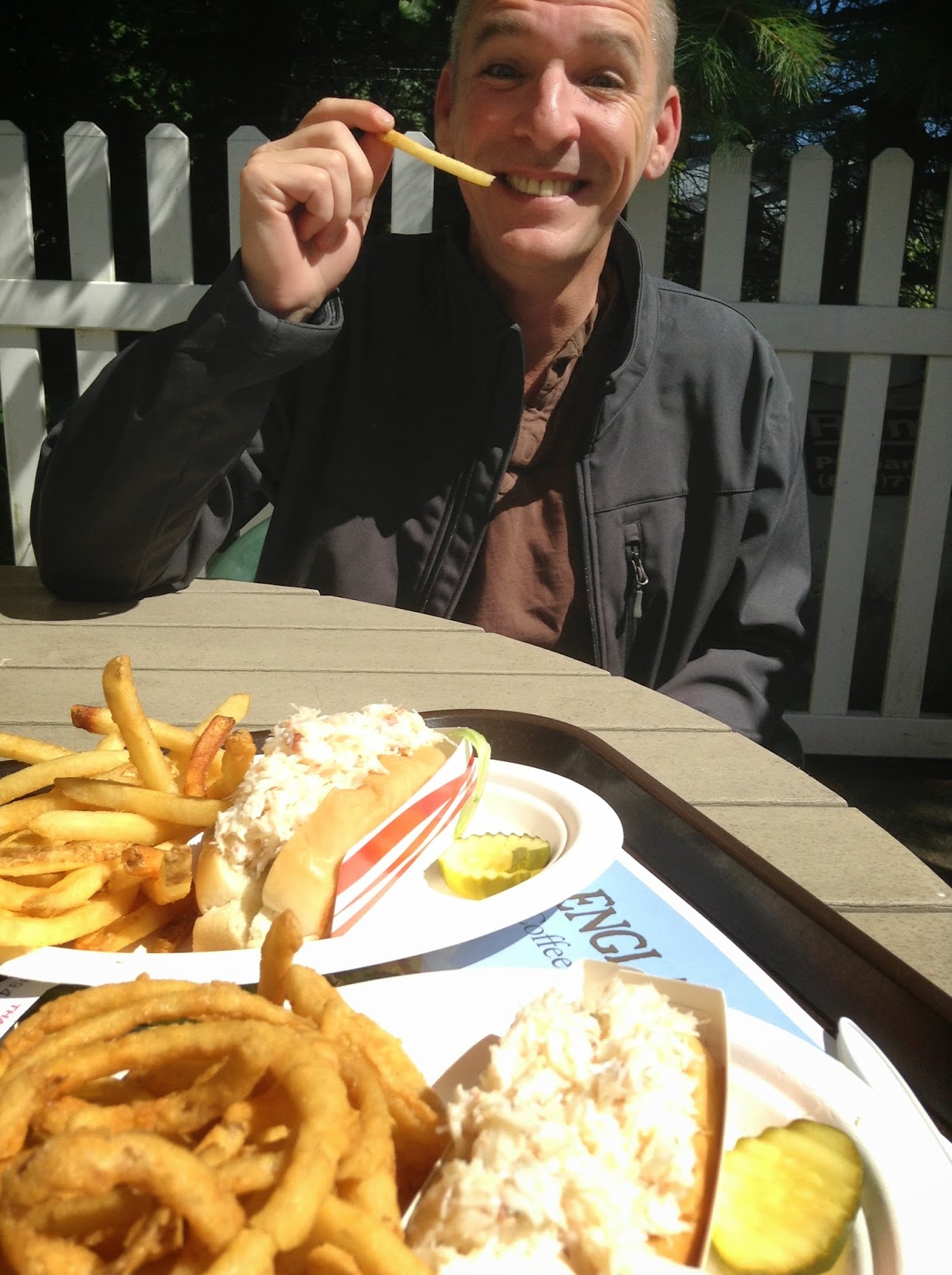 And we stopped for a couple crab rolls, oh my gosh so delicious. We prefer crab over lobster rolls and since they are cheaper, double bonus. And why do they call them a roll? It's crab salad sandwich in a hot-dog bun so where did this roll business come from? 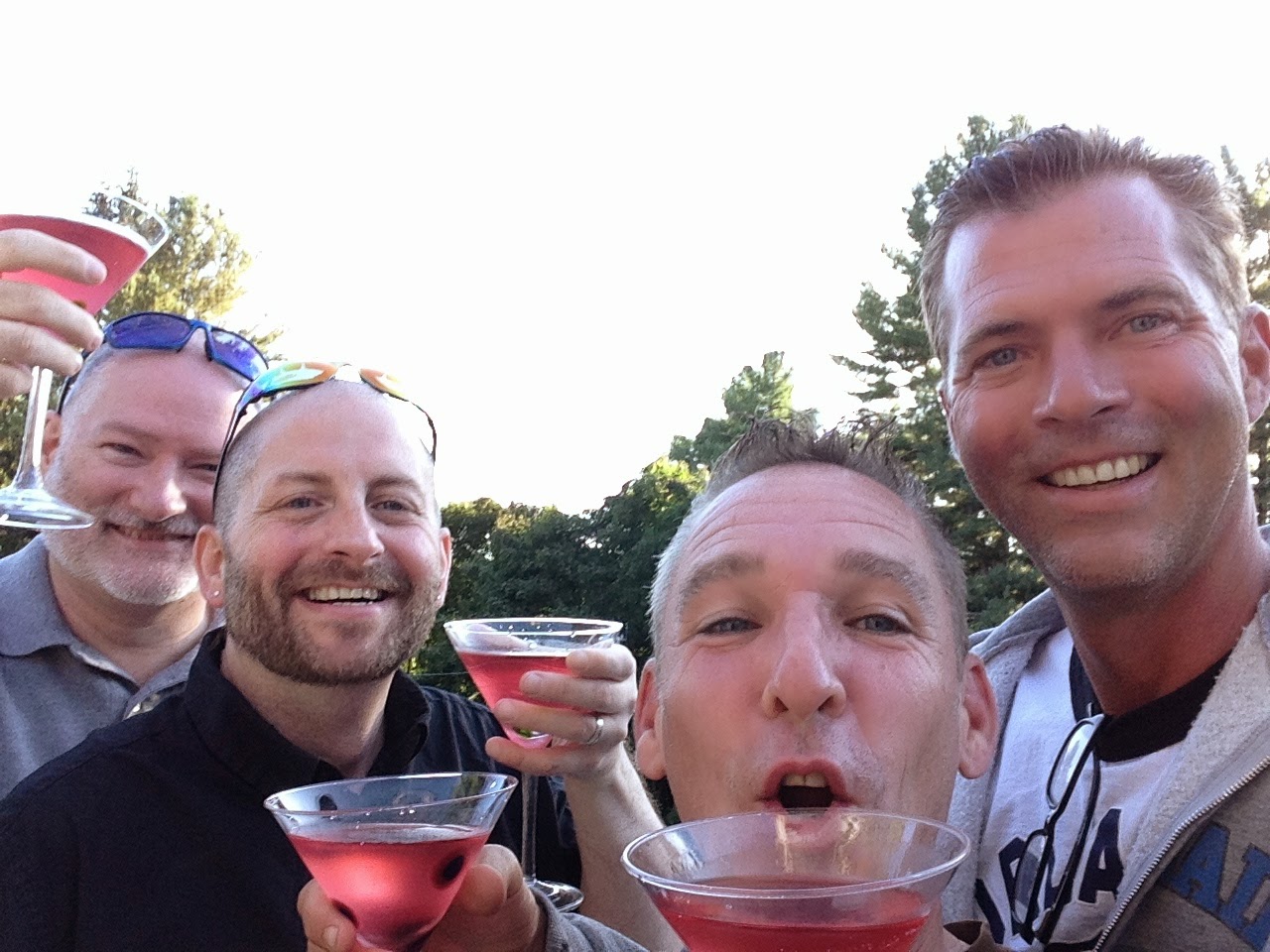 Our friends finally arrived after hitting some long-weekend getaway traffic through the Boston area and we whipped up a batch of cosmos. We brought the glassware from home and all the fixins. 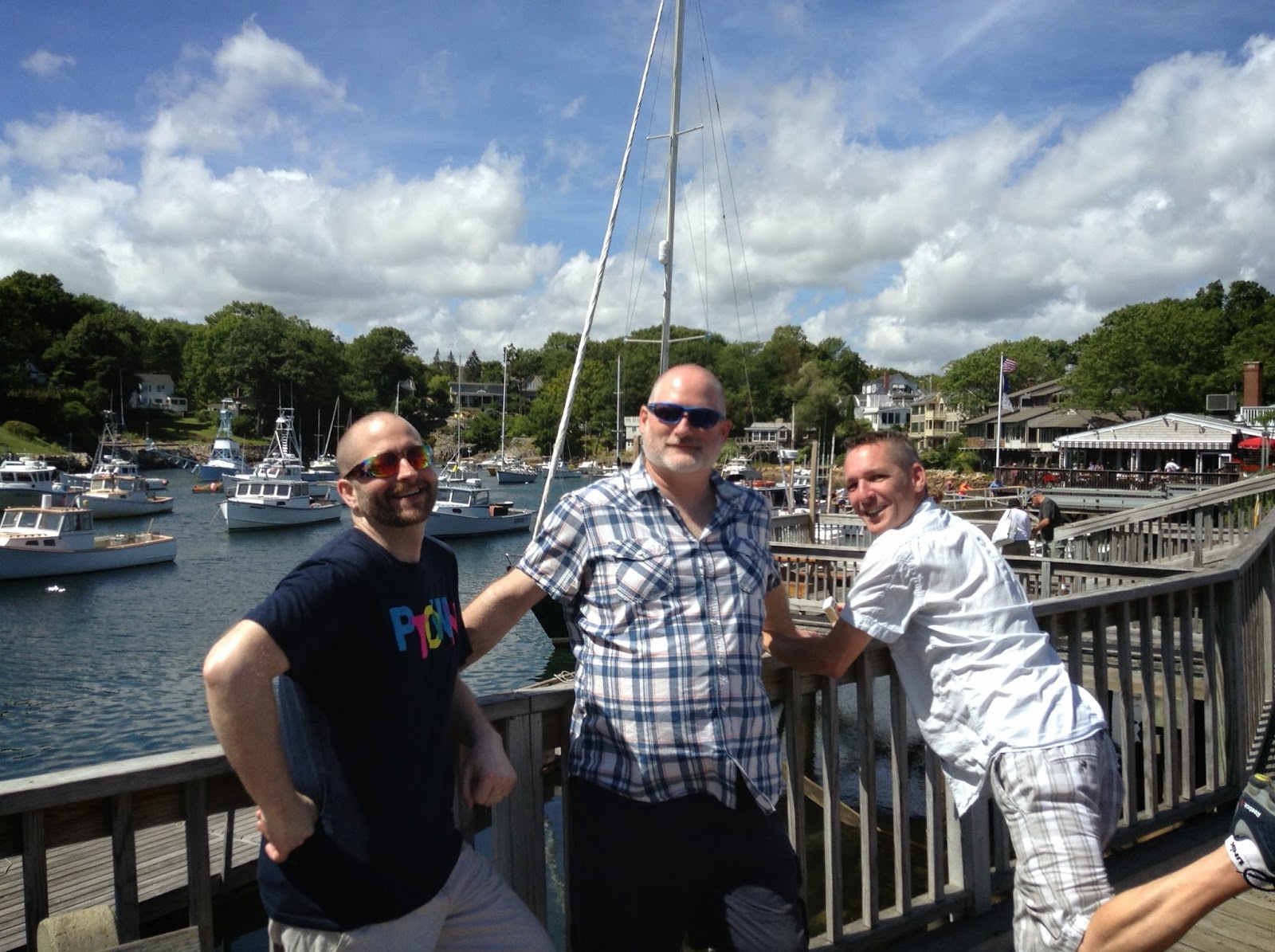 The next day we took a long walk around town and along the beach. The weather was just beautiful. We played tourist, buying souvenirs and such. 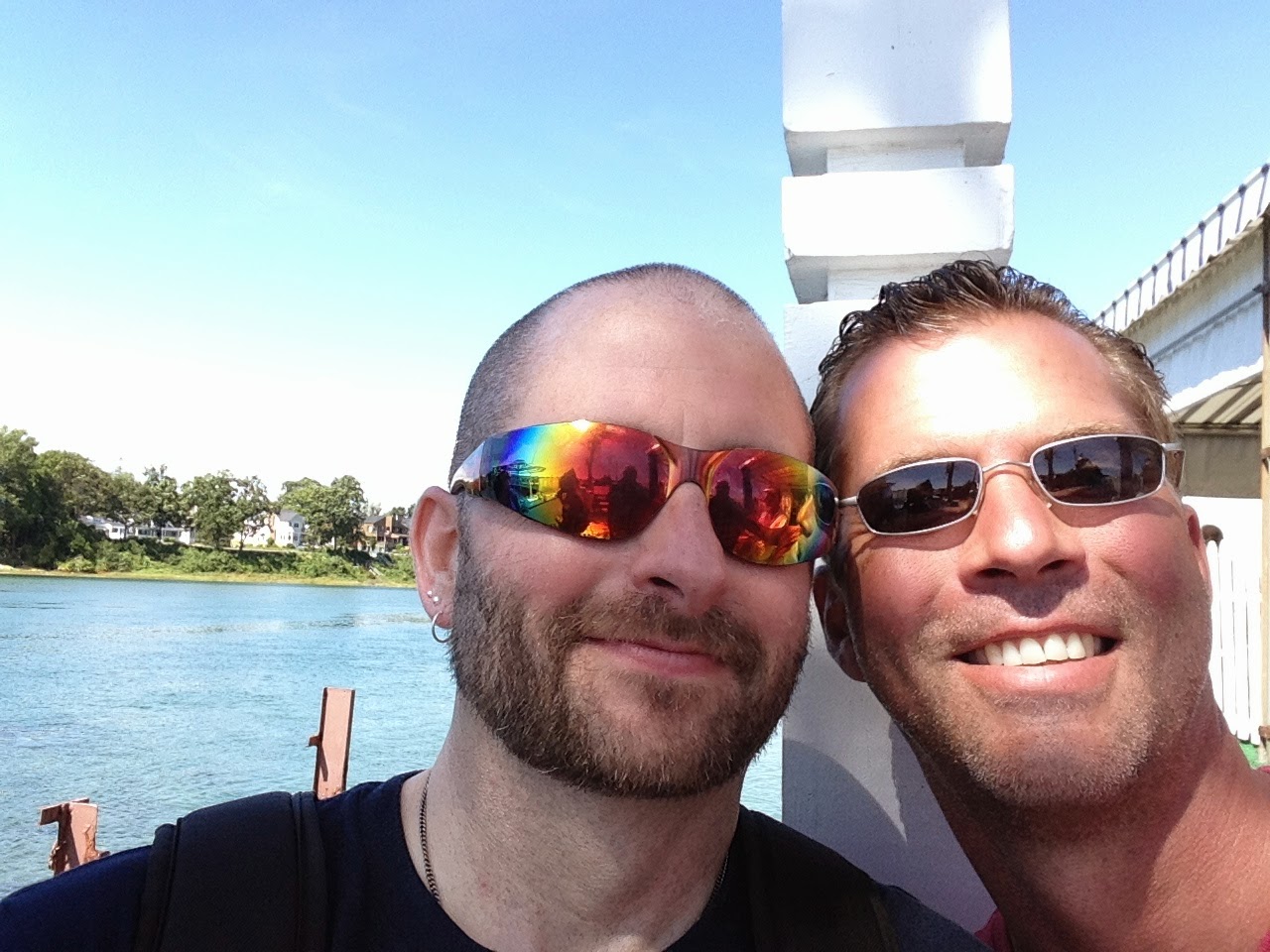 Then went to the outside bar at the Bluewater Inn for drinks. Bobby the bartender is always there and he had the soundtrack to Pricilla, Queen of the Desert on. We got quite the buzz and had to go nap it off afterward. I love this picture, it makes me think Rock Stars! We all bonded and shared lots of intimate details of our lives, something you only do with close friends which is what we seem to be becoming. 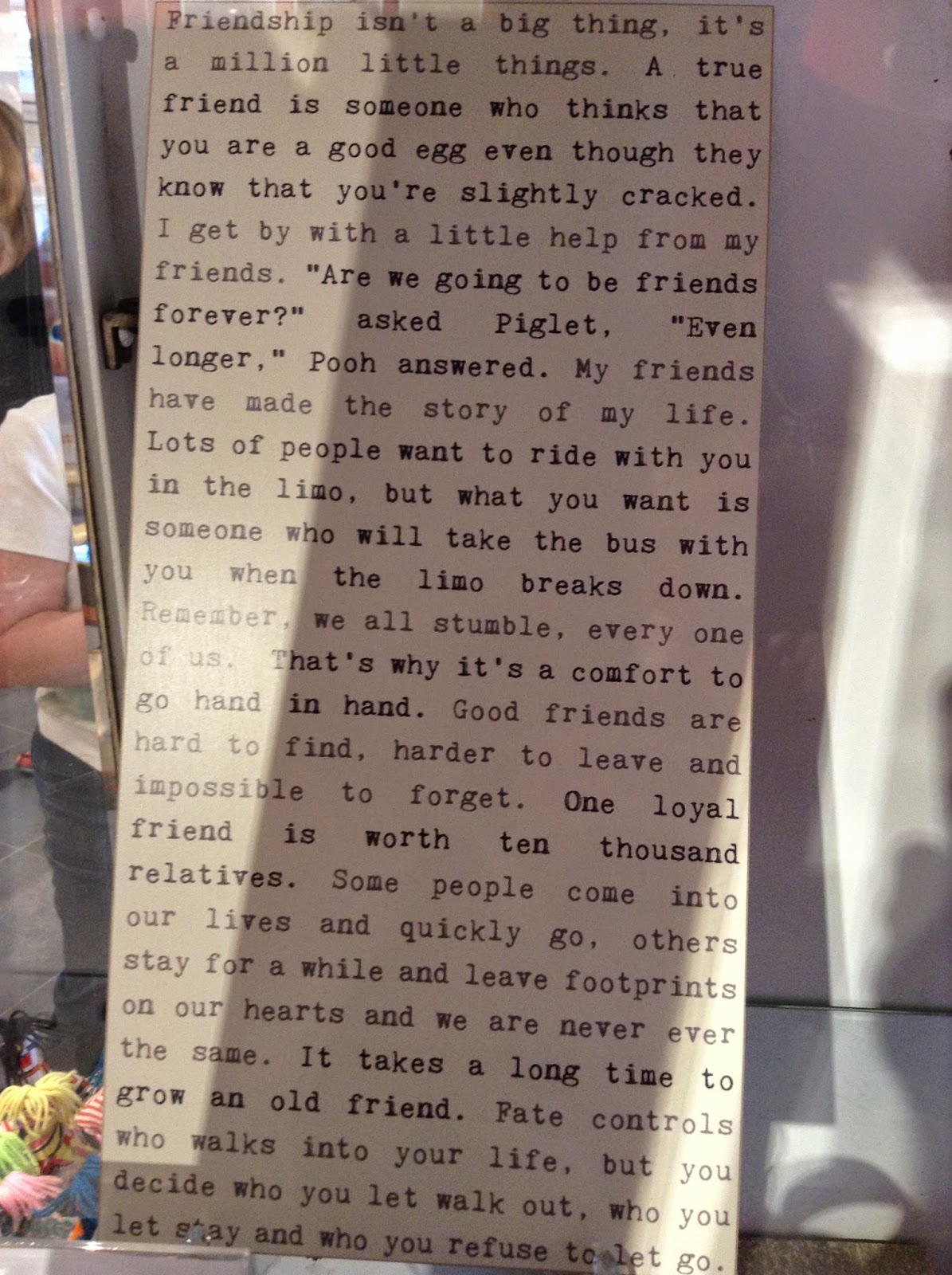 I really liked the sentiment here. I wanted to get it for our ex-friends because I think we should bury the hatchet and let bygones be bygones. But the sad truth is even if one refuses to let someone go, the other people can (and in this case did) go right on out of one's life.

As we walked around that last day with other friends who stopped by on the way home from camp, we saw our ex friends walking across the street. I messaged to let's bury the hatchet and have a drink. I also invited them to stop by our hotel for a drink. Serge was pretty astonished at the shattering silence as was I. And apparently I am just repugnant because I was blocked on Facebook a short time later. Sigh. 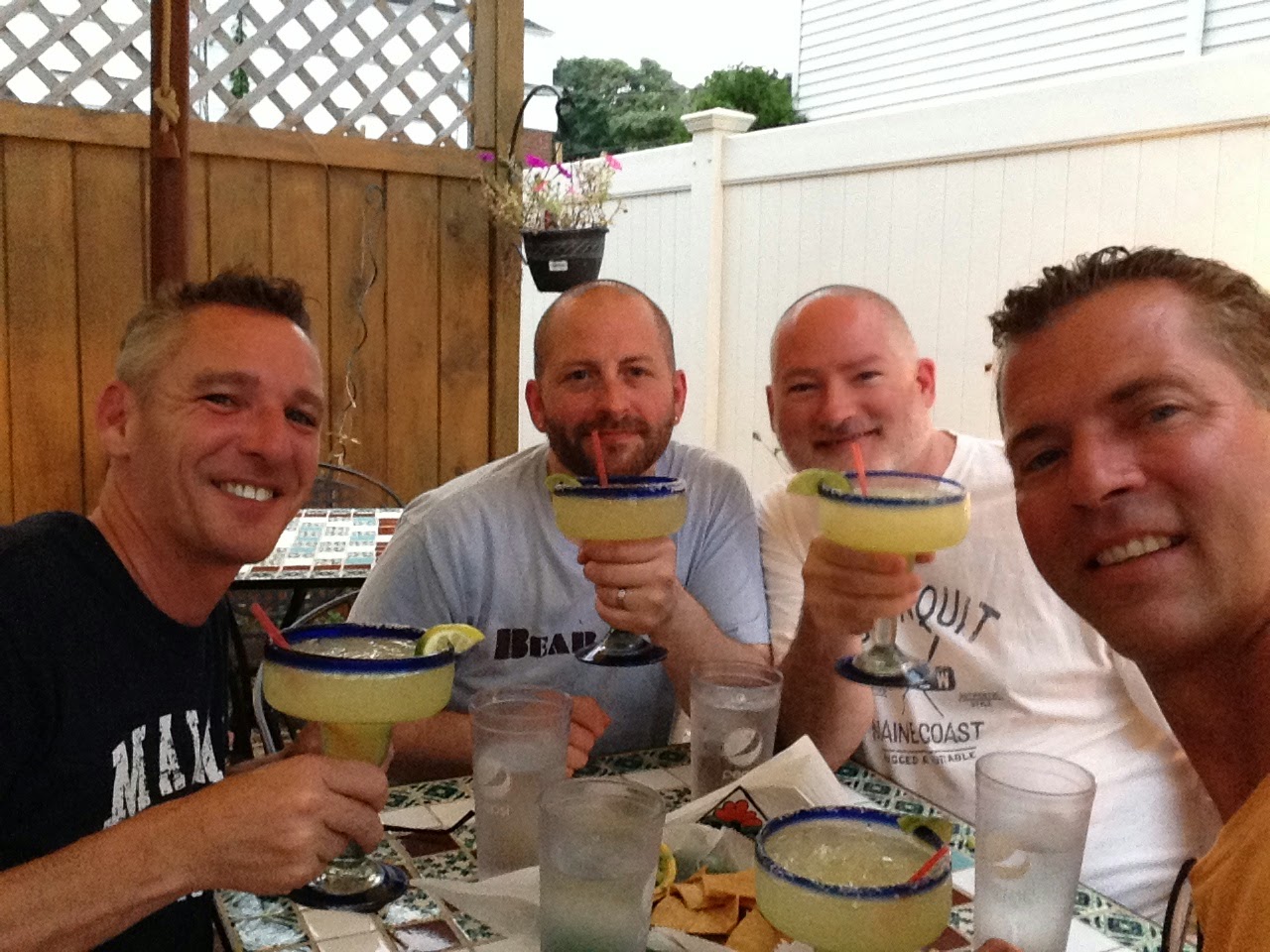 But then why not focus on the friends you are with which is exactly what we did. After celebrating our last night there Mexican style, the sky started to get menacing so we went back to the hotel and played Heads-Up for a while. We had the BEST time with Sean and Jeffrey and can't wait to see them again at Thanksgiving. 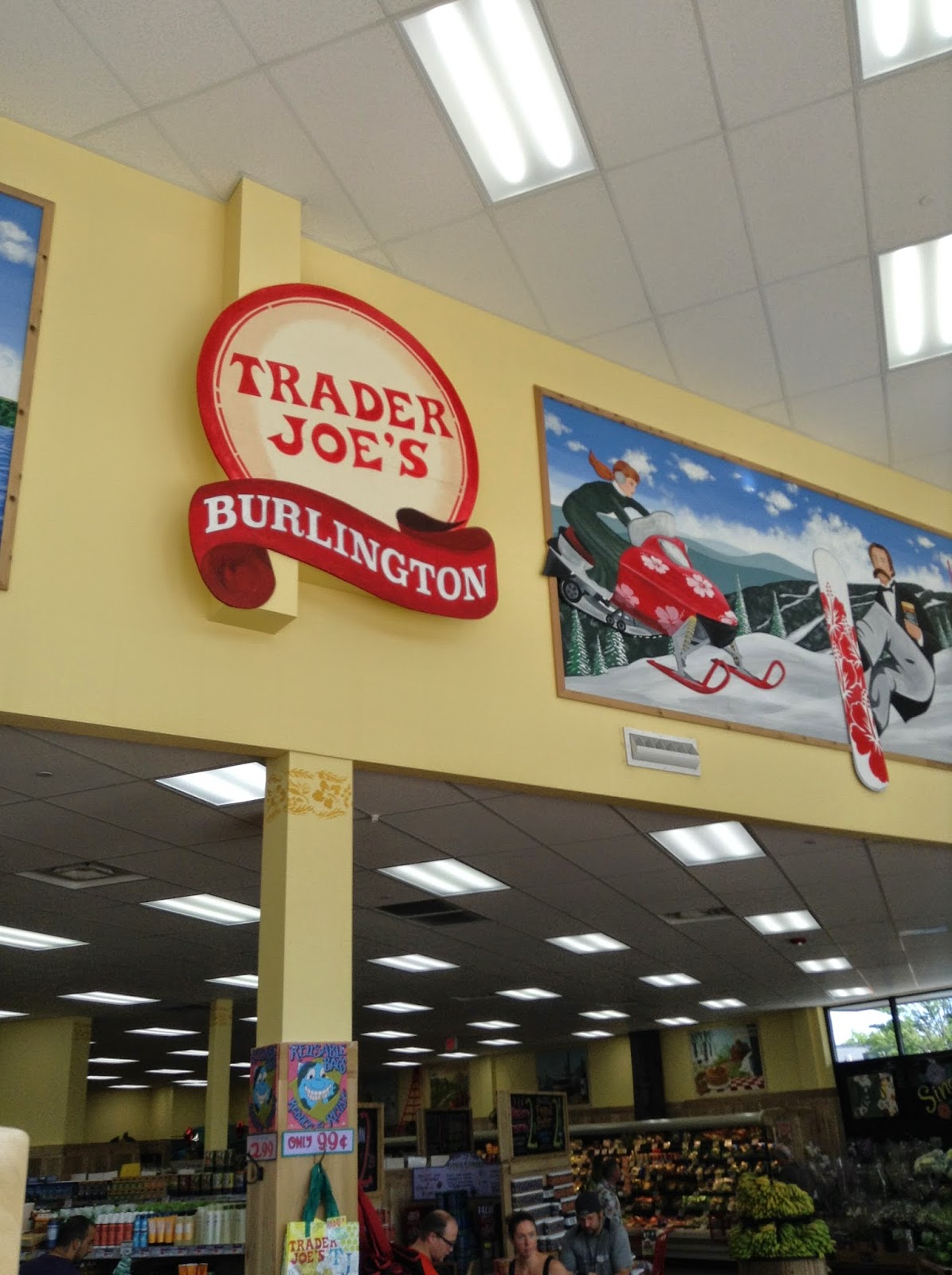 On the way home we discovered that they opened a new Trader Joe's in Burlington which is only two hours from home. We stocked up on all our favorites and can see popping down there every once in a while. Previously, the closest TJ's was a 5-plus hour drive away.

The next two weeks I still haven't worked and didn't go anywhere because the money well has run dry. I planned pretty well though even though I didn't qualify to get unemployment. My last day of work was June 20th and My first day back is this week September 17th. Three months off and it was just divine. 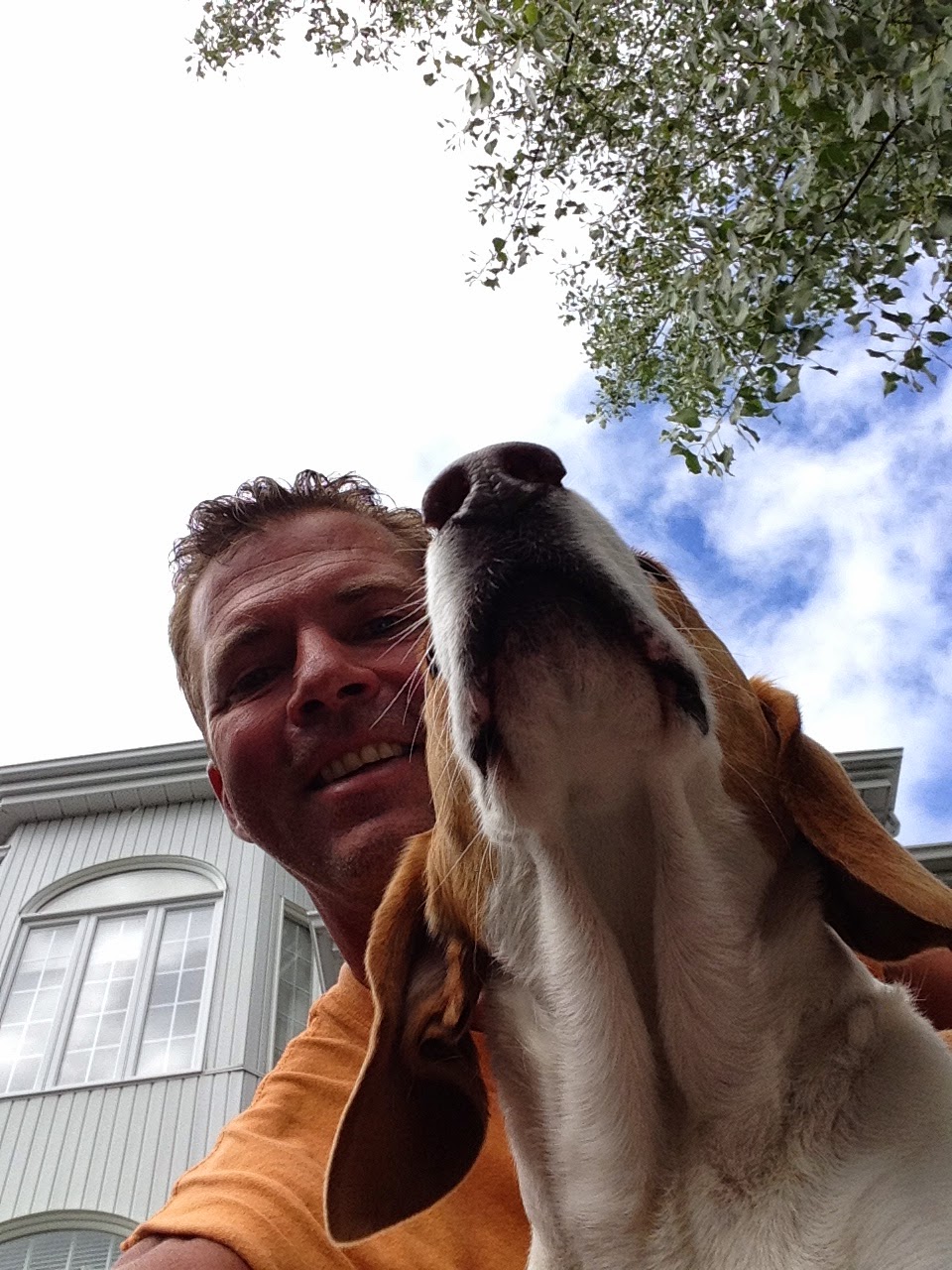 I will close with the obligatory Georgie shot. We are watching mother-in-laws dog this week while she vacations in Europe and I love having two dogs around. Makes me want to add to our family but Serge will be a very hard sell. So that's all I've got for you, hope you enjoyed it. Thanks for stopping by. Mwah!
Posted by tornwordo at 3:34 PM

As always I enjoy your comments. Thanks for being a part of my world...

sassybear and jeffrey are the BEST, aren't they?

sorry you have shitty "friends"; their loss, not yours.

have a great week!

More fun in the sun. I love the northeast and miss it sometimes. Ken and I want to do a drive around the Gaspé peninsula one day. Have you done that?

It was wonderful to meet you and Serge that Friday afternoon, Richard. I'm glad you enjoyed your time down in Ogunquit - it's a magical spot. I'm looking forward to Rox's visit, coming soon!!

Colleen's the best! I can't wait to see her again, but I'm shitting myself about those chickens.
I've been doing so much trip planning, I'm almost sick of my trip. Ugh.

That weekend was a highpoint of our summer. We are really enjoying our ongoing friendship with you two and are excited to see you again at thanksgiving. As a nudist, I must chastise you just a little: nudism isn't about looking good naked; it is about feeling comfortable in your own skin and enjoying nature au natural. Would that we all had such comfort in our own bodies as those who are not "popularly shaped." I applaud them (and you for at least being willing to hike among nudists...too bad you didn't try it - you might be surprised at how freeing it is.)