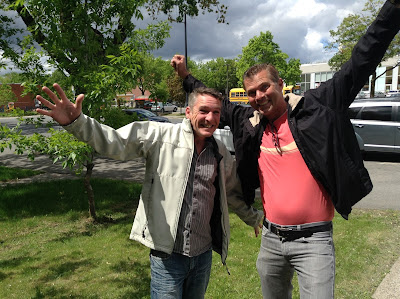 We departed last Friday for our annual road trip to see friends. Upon departure our tenant who agreed to water our flowers and pick up our mail snapped this shot for us. Because we have had such bad luck with car trouble on previous road trips, we decided to rent a car for this one, a Hundai Elantra and it was just great with amazing gas mileage. Seriously, it cost $25 to drive to Boston. Such a deal. 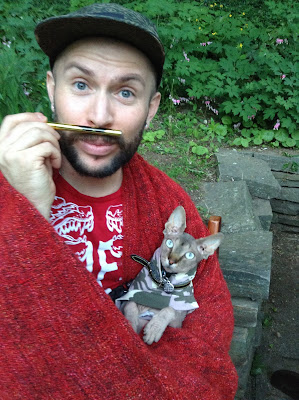 First stop was to see our friends in Worcester, pronounced "Wooster" for those non-east coast people. They bought a house just a week before and were still unpacking but I feel more comfortable in a chaotic, messy setting than I do in a "perfect" house. They have four animals too, including this amazing cat, Eros. I just love him and more than once sat down on the couch only to discover he was hiding under the blanket keeping warm. He is such a snuggler too, hands down my favorite cat I've ever met. 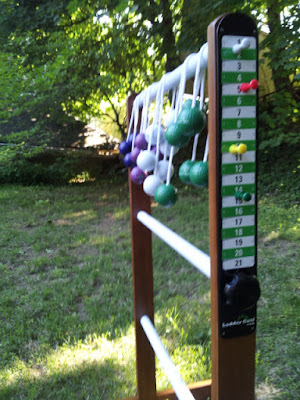 Our friends had a little barbecue and we played ladder golf and ate some of the best brochettes I've ever had. We enjoyed hanging out with Veronique and her husband and loved Susan's visit who regaled us with stories. Oh how we laughed all night long. 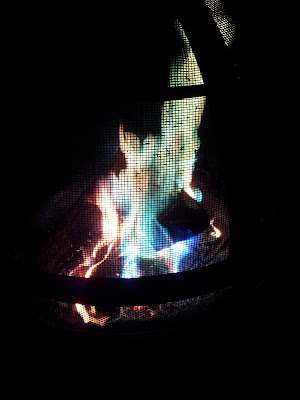 I forget the name of the product but you throw it in the fire and the fire becomes technicolor, not for mere minutes but for nearly an hour! It made the fire mesmerizing. Jello shots and magical brownies added to the fascination by the fire. 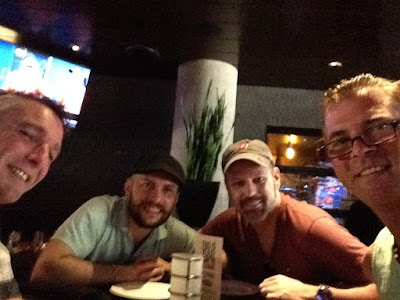 The next day we headed into Boston to see my first baseball game in 20 years. We had lunch at the Yard House and went into the park. 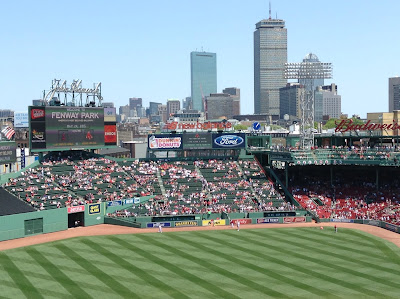 Was it not a picture perfect day? I really love attending baseball games, it's too bad Montreal lost the Expos years ago. We had two dozen CampCampers there with us so it was fun to mingle and get excited about this year's Camp in August. Another funny thing - there were no "no smoking" signs anywhere, so Serge and I smoked a bunch of cigarettes. Then when we left we noticed the sign at the entrance, "Fenway Park is a completely smoke free facility". Could have fooled us. No one said a word to us about it. 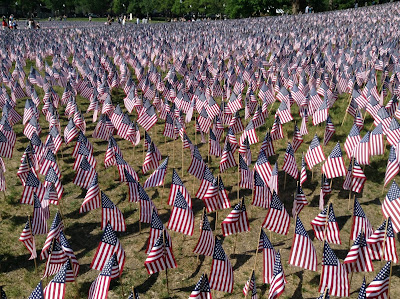 As it was Memorial Day weekend, the flags of the fallen were all over Boston Commons. We strolled around and had some amazing cupcakes at Georgetown Cupcakes. Mine was chocolate peanut butter cheesecake. Divine. 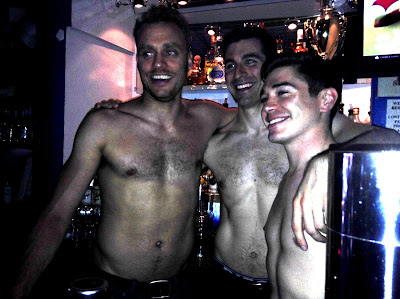 Next stop on the road trip we met Michael in New York City. First night out for drinks and although I didn't get a picture of us with Michael, I did get one of the cute bartenders. As it was Memorial Day, there were free hamburgers and hotdogs with our martinis. 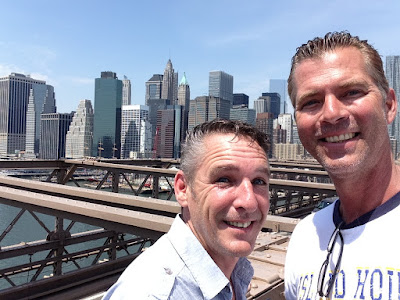 The next day was great fun. First I decided to have a New York bagel since there is such a rivalry between Montreal and NYC on the matter. I thought it was no contest, Montreal's are infinitely better. Then we headed to the new TKTS outlet in Brooklyn to buy theater tickets for the evening. After that we walked over the Brooklyn Bridge to Manhattan and over to Century 21, our favorite shopping place in New York. We loaded up with $300 of stuff that would easily have been $800 up here. 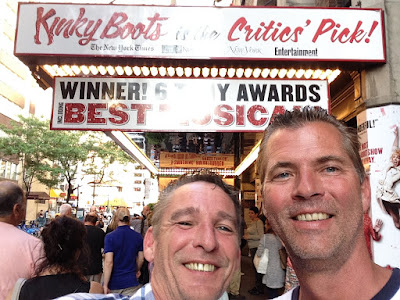 We had planned to go eat Singapore noodles at the place we discovered last year, but alas, we could not find it. So we scarfed down a burger (Serge's bison, mine vegetarian) and went to see Kinky Boots. Great show! And the bonus was that Cyndi Lauper showed up on stage at the end to accept a $150000 check for her True Colors fund. 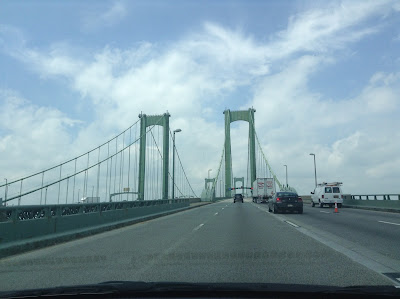 Then it was time to head down to Delaware to visit our friends Mark and Joe. It was a bitch getting out of NYC as traffic was terrible, but then it was smooth sailing all the way down. 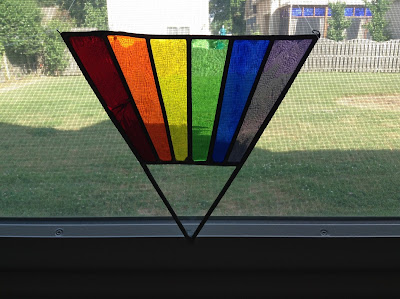 They had some neat stained glass pieces. I took a picture of this as I would like to try to make it at Camp Camp this year. We also got to meet their new dog Walter who was as cute as can be. 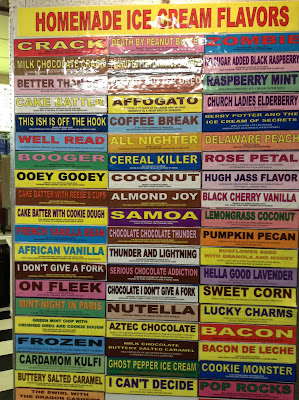 Mark took us down to Rehoboth Beach to stroll the boardwalk. I loved the ice cream menu at this place. Hugh Jass Flavor and Booger and The Girl with the Dragon Cashews were my favorite names. Alas, I chose boring old Black Cherry Vanilla because, well, I'm a waspy white dude. 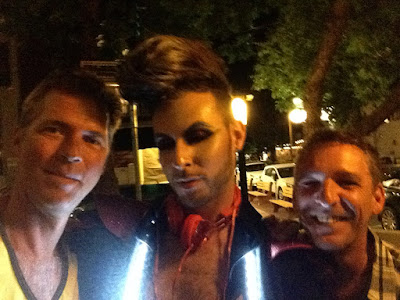 That evening we attended the Rehoboth Idol competition and met Joel who seems to be an Adam Levine (is that his name?) wannabe. We also met several other people. I seem to be able to talk to just about anybody these days or maybe people just gravitate toward me. Whatever it is, I like it. 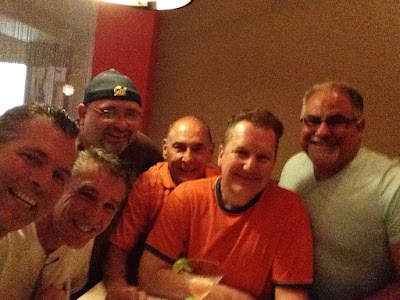 The next day was a bit hazy as we stayed up past one the night before. I never do that. We took it easy, went out to breakfast, strolled the beach, toured the town and relaxed before going out to happy hour at this really good Japanese place with half priced drinks and appetizers. We stuffed ourselves silly and without us knowing Joe (who left before this picture was taken) picked up the check. Wow, we had only just met him. What a nice man! 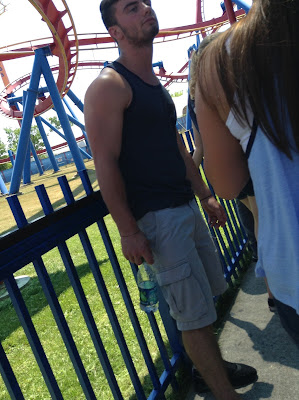 The next day Serge let me be a little kid and we went to Great Adventure in New Jersey, the largest theme park in the world. We tried to get on Kinga Ka, the tallest, fastest roller coaster in North America but it broke down while we were in line so we headed over to Superman. We were behind this guy and his girlfriend in line. OMG he was just perfection. Be still our hearts. So I slyly snapped a few pics. 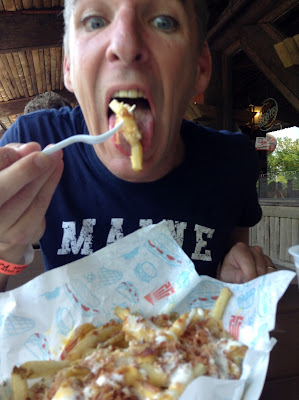 The food and beverage prices were exorbitant. Here we split a bacon, cheddar, ranch fries which I dubbed American Poutine and each had a beer. $27 bucks. Earlier we had two small diet cokes for $10. Outrageous. Plus absolutely no drinking fountains whatsoever. There oughta be a law! 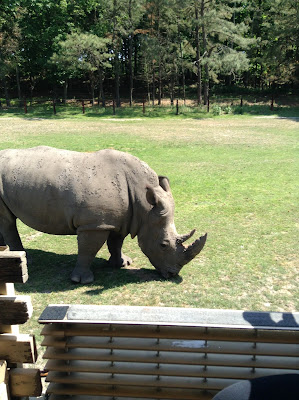 They had this ride called Safari Adventure which intrigued me. Little did I know it was over an hour long and we got to see a TON of wild animals in a Jurassic Park style army vehicle with a guide. We saw lions, tigers, bears, zebras (a first for me) and lots of other things. 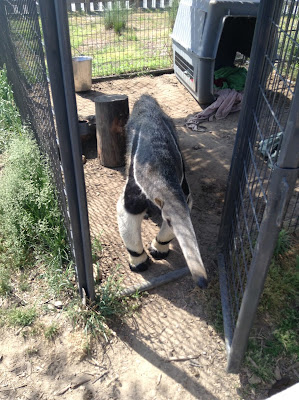 I think my favorite was the anteater. Such a bizarre creature. Apparently they are quite aggressive so you couldn't touch him. Evolution is such an amazing creator. 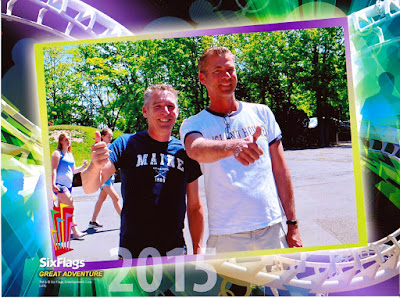 After that we finally did get to go on Kinga Ka. It was the most terrifying ride I've ever been on and I will NEVER do it again. 0-128 miles per hour in 3.5 seconds, shoot straight up a fifty story (456 feet) tower and then back down again. 28 seconds total. The whole time my brain was in "I am going to die" mode. There is a fine line between thrill and terror and this ride crossed it. Here, some fool took a video on the ride over on Youtube. Watch it here.

Yesterday we drove home but stopped in at Breen Acres and had lunch with the boys. Forgot to take pictures but it was great. The hours pass so quickly and we had to get back on the road to get home. Sorry I don't have a Georgie pic as Serge is at his mom's as I type picking him up. I hope you enjoyed our little recap. Until next time peeps, Mwah!
Posted by tornwordo at 4:41 PM

Thanks for including us on your trip. We will definitely plan a longer visit next time. And, yay for no car troubles.

You went right through Providence going from Boston to NYC. Best ever time for me Providence, RI to NYC was 2.2 hours. I went like the proverbial bat out of hell.

Summer fun, and it's not even summer yet!

At Cedar Point that Kinga Ka is called the Top Thrill Dragster - and I fucking LOVE it. It's a long wait for 23 seconds though.

you guys have more fun than anyone I know..all I could think of was..damn, wish I could have gone with you..

It was great to see you two, and thanks for including us on your road trip!!

I heard you scream as you passed by philly!