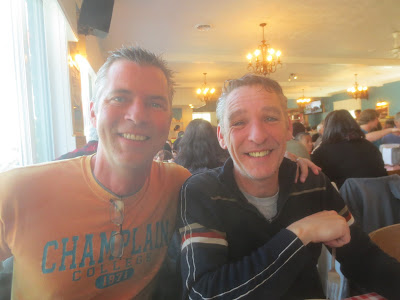 I've been lax on updating the blog. So sorry, but we have been awfully busy as you will see. Here is my honey and I at our annual Sugar Shack outing. After Cuba, I went on a diet to lose all the holiday weight I gained but made an exception for this. Boy did I have a stomachache after. It felt like my stomach had shrunk, but more likely the quart of maple syrup I ingested. 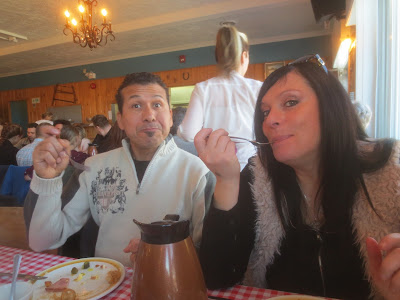 We went with our besties Annick and Jesus. They live about an hour away so we don't get to see them as often as we'd like. This coming weekend we are going out to spend a couple of nights and do the wine route. 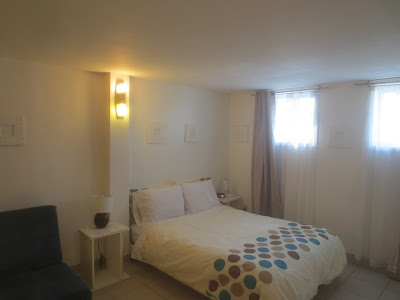 We flipped another unit over to airbnb and they are both doing very well. Our occupancy rates are extremely high - May and June are sold out so I think next year we need to hike the prices a bit. Boy do people shed a lot of hair though. 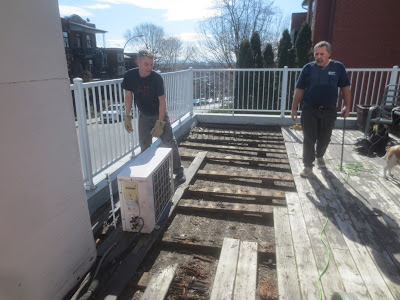 We finally tackled replacing the deck. It was at least 10 years old and there was a leak in the garage so it was time to address it. A little over 3 grand that we did not have. 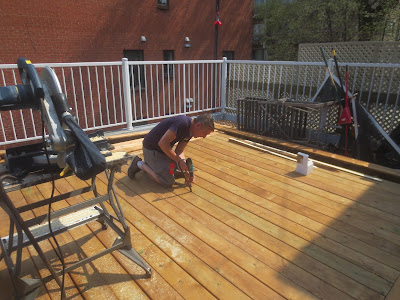 I was not allowed to help but I was allowed to pay. It turned out great and we are planning a summer barbecue to inaugurate it. We also were able to identify the leak problem and repair if for pennies. Yay! 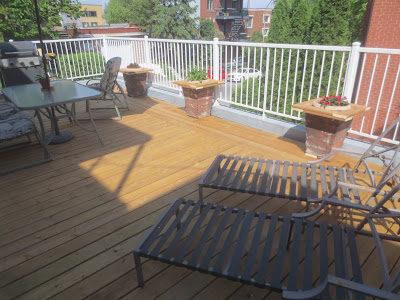 Serge even made those shelves for people's drinks around the planters. Just before this project, we lost a couple friends again. Remember our ex-best friends (whom I think of as the sociopath and frankenstein dick) who have systematically convinced all our mutual friends to shun us over the last two years? Well the very last mutuals Facetimed me to tell me we can't be friends for a while. Said he wanted to do it face to face and not in a text (why? So I can have this freaking memory?) said it wasn't coerced (which I figure meant just the opposite). I said I had no words to respond to that and we hung up. I didn't ask why since I knew it had nothing to do with us as we have been nothing but kind to them. People we've known for 20 years. When Serge got up and I told him he said, "I knew it!," and promptly walked over to the computer and blocked them. I went ahead and unfriended all the friends we had met through them to save them the trouble. I do have a blackmail picture that would give them a reason to not be friends but I think I will just take the high road on this one. Just done with the whole lot of them. 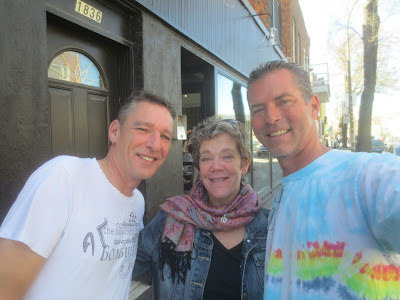 Camper friend Nancy came up for a visit. It was great getting to know her better. She also has an airbnb unit so we did a trade. Hopefully we can cash in this summer and explore Southern Vermont from her place. 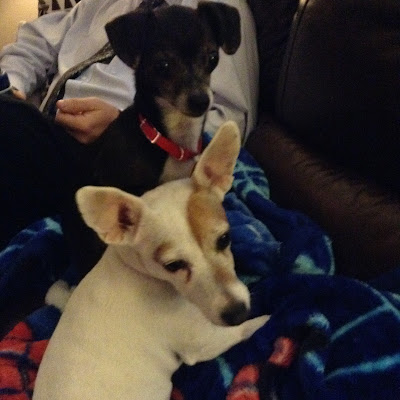 We had to cut our annual road trip to 4 days from 10 due to money, work and airbnb responsibilities. We made the most of it though. Got to stop in and see Sean and Jeffrey and the pups. 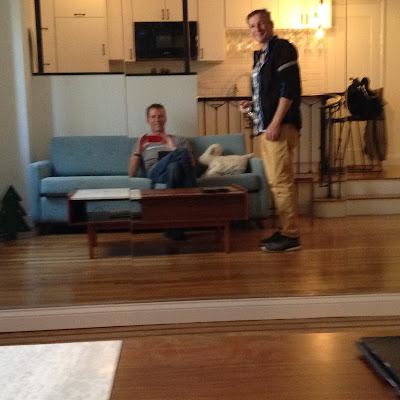 Next stop NYC where our Montreal friends recently bought a condo. They offered it to us for the weekend since they were not using it. We rented a car to go to New York and I chose the wild card category. This meant we would get a compact or better car. When I arrived they told me the wild card is a 7 passenger van. Doh! So that raised the gas cost and I had to park it in Manhattan. It was easy though, the method Tony and Chris showed me (criss cross the numbered streets between Central Park West and Broadway starting at 68th) worked like a charm again. Parked and took the subway to our borrowed condo. 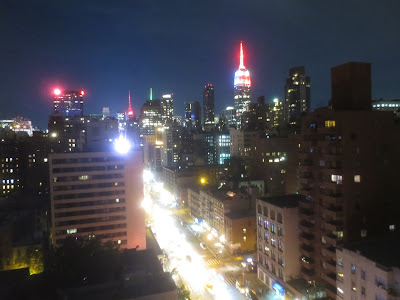 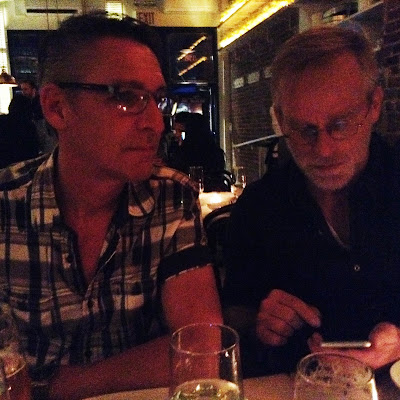 Afterward we looked for a bite to eat and ended up in a tapas place where oddly enough I had a margherita pizza. The next day was the big camp camp goes to Fun Home event. 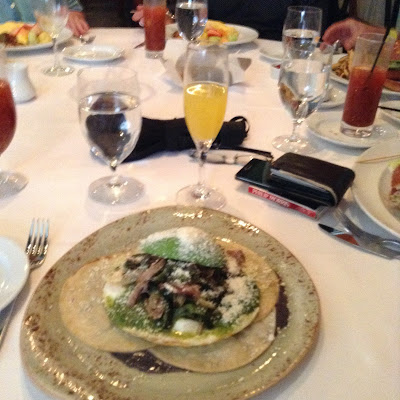 Before the show we met up with a few campers for brunch and I had huevos rancheros. Yum! We also sleuthed out an Izakaya (Japanese gastro pub) and had okinomiaki and sushi. Heaven. 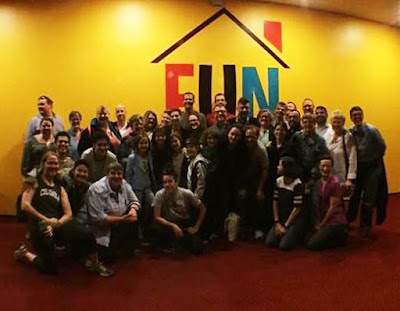 We were 33 campers from all over the country who came together to see the show. What a great show it was too. Serge isn't in the pic because he went out to smoke. After this the cast of the show came out and talked with us. So very cool. When I got home I went to the library to get the book but I am #7 on the reservation waiting list. 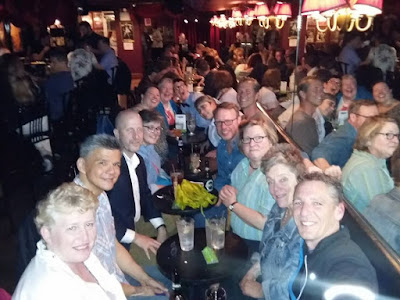 After the show some of us went out for drinks and dinner. It was great to see everyone. 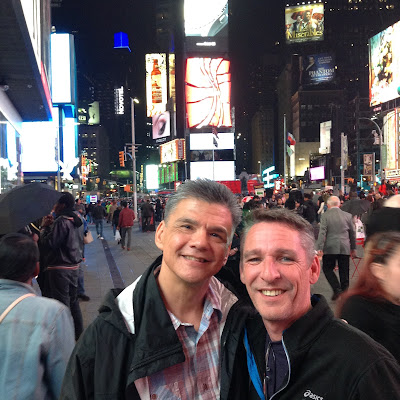 We especially enjoyed hanging out with our Alaskan friend Jim. It's amazing the tight bonds you can make with people all through the miracle of camp. I think there are a couple spots left this year if you would like to join us. Campcamp.com 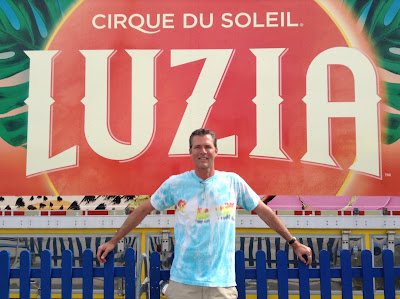 Then we had to hustle home to turn over the airbnb units. A couple days after I got an offer for tix to Cirque du Soleil for 30 percent off so jumped on it. It was one of the best shows I have seen from them. It had EVERYTHING and the music and costumes were inspired by Mexico and it worked really well. 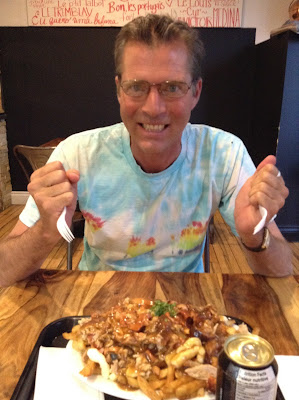 Afterward we went to this Portuguese joint we like and had the chicken and chorizo poutine. It is huge, and even though we shared, we couldn't finish it. So delicious and only $13 tax included. You couldn't eat dinner at McDonald's for that price and it is infinitely better. 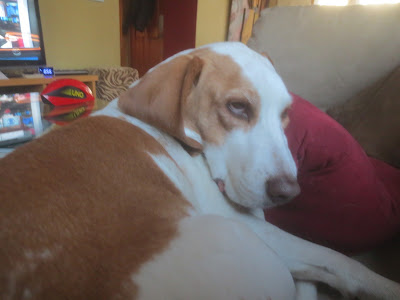 Finally, a little picture of Georgie. He has been extra clingly lately to me. Lucky for him, that is fine by me! Thanks for stopping by peeps - until next time......MWAH!
Posted by tornwordo at 11:27 AM

Thank you and also for the Georgie picture..

I think I'm going to 'turn' gay..you guys have the most fun.

Hilarious. I feel ya, as I've been there before.

georgie! and you got to visit breen acres too! you both are looking smashing; bonne ete!