Greetings one and all. We made it! 2020 is here, the year I will be 55 AARP! I started this blog 15 years ago and though it has been largely untended these past years, I hope to appear a bit more often as there is no other venue like this to keep like my scrapbook. I can see myself perusing (and harshly criticizing) my writing when I'm good and old. Since I haven't been here a while, let's treat this like one of those long letters you might find in your Christmas card. (Serge hates them but I love them.)

Last March I started a year long contract for a course that I designed and delivered in 2017. (It has also been renewed for this March so staying put for a bit.) I already had a fair amount of travel planned in 2019 so it was tricky fitting everything in, but as you will see, all worked out fine. This was my YEAR OF NOT DRINKING!!! Well October to October so most of last year was dry for me. I did everything I would normally do in a year but with zero alcohol. I slept so well! It was a bit rocky when I again imbibed on the Europe trip with my family in October (my tolerance had changed drastically) but we have a no-alcohol in the house policy now so just the occasional drink or on vacations now. Our first big trip was the beginning of May, we went on a cruise to Greece out of Rome and frankly, I think it would have been more fun with drinking lol. But it was fun nonetheless. 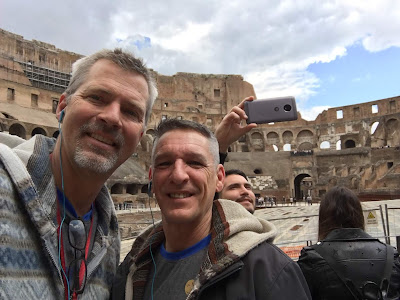 Upon arrival in Rome, I wanted to see the Coliseum, something we had wanted to do last time we were in Rome in 2008 but didn't get to. There were hawkers offering guided cut-the-line tours of the Coliseum and the Forum for 35 Euros. Perfect! Serge was suspicious but it was great with knowledgable guides. I started playing around with facial hair on this trip.... 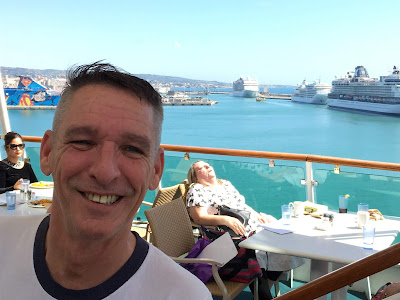 Serge and I were up to our usual antics aboard cruises. We tried not to mock too openly. Frankly we hardly saw each other and ended up leaving notes for each other each time we went to the cabin. I enjoyed all the trivia games aboard and Serge enjoyed the bars with his late night cruise friends. If I was with him during the day, complete strangers (to me) would pass by and greet and hug Serge. Always the superstar that one.

Anyway, we had a great time visiting Malta, Mykonos, Athens, Naples and Messina. Sadly, we couldn't tender to the shore for our visit to Santorini because of wind. I don't have to rehash the whole trip here (fairly run of the mill cruise experience, made some new FB friends natch). 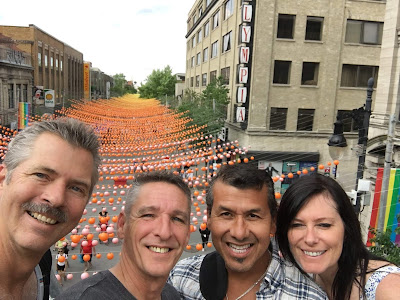 We had a nice summer weather-wise, not too hot and not too much rain. Here we are with our Granby friends in the village for the last year of the colored balls. As you can see, the toying around with facial hair became a mustache. 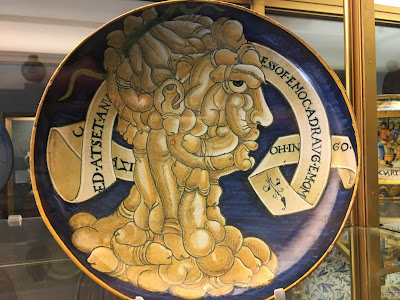 In July, I got to go to London where I got to cross off Stonehenge from my bucket list. While I was in Oxford, I went to a big museum and in the ceramics section, I found this plate. I had to go find someone to explain. The latin writing is backward and reads "Every man looks at me as though I have a head of dicks". The purpose of the plate is unclear according to the docent. It could be a joke or it could be porn, but there are very few of these plates remaining that were made in the 1500's. 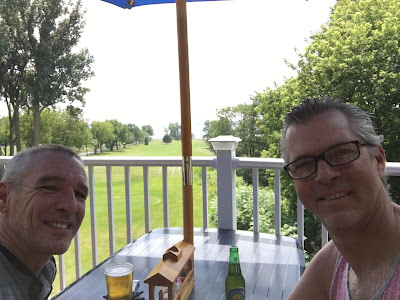 By the time my birthday rolled around, I had rid myself of the stache. Serge and I went on a little road trip for the day driving around Lake Champlain. There I am with my no-alcohol Heineken on my birthday. 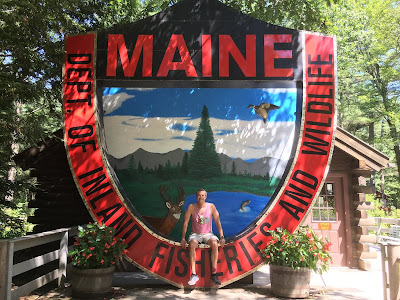 In August, we went to our 6th year of Campcamp. I took on a larger role coordinating transportation for the arrivals and departures of campers. It was a very good camp, mellow, without drama and full of love as usual. (Also - no drinking!)  Looking forward to this year! 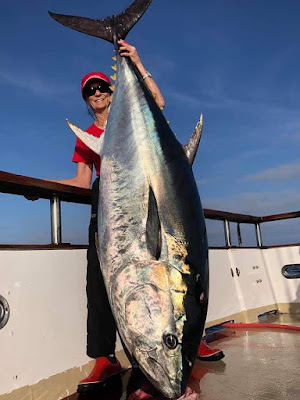 Around this time my mom caught her biggest tuna ever! She had been hungering to land a "cow" of over 300 pounds for many years. I watched over the years as she hid disappointment as others reeled in their cows. Finally, she got one and boy did she overachieve - 346 pounds! What a feat. 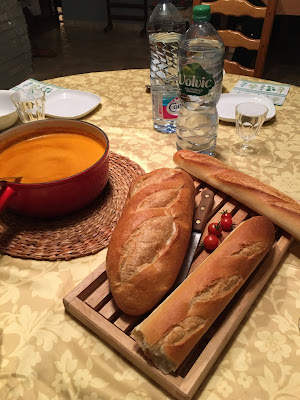 In the fall, I went to France and Spain with family. I had finished my year of sobriety and frankly, I had difficulty sleeping the whole time. Part of that was getting used to alcohol again, another part jetlag. It was rather cold and rainy much of the time as well. My stepdad got sick on the trip so that was a drag for him for 5 days. 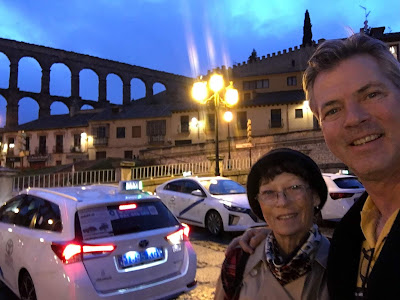 I fell in love with Neufchatel cheese and marveled how cheap the cheese and wine were in both France and Spain. Here in Segovia, you see the ancient roman aqueduct dominating the skyline in the town square. 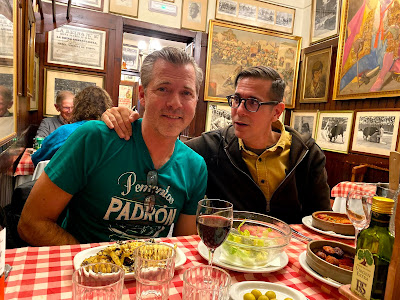 We really enjoyed Madrid at the end eating and drinking our way around the city and meeting up with friends there. Here I am with my brother and you can really see my age! He is 9 years younger than I am but I think I look much older than him. Oh well, it's all downhill from here. Normale. 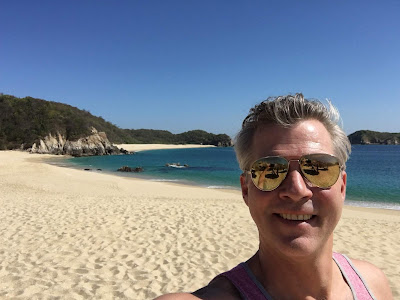 Then for two weeks at Christmastime, we did something we have never done before. Beach vacation! We went to Oaxaca state to Huatulco airport and rented a house on the beach and then explored the dozen beautiful beaches dotting the coastline. This beach was our favorite, perfect combination of deserted paradise with good food, drink, snorkeling and music. We came back here four times we liked it so much. Playa St Augustin. 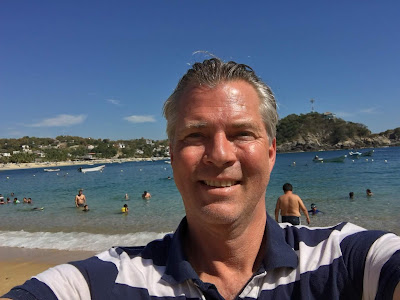 Here is another beach we visited in Puerto Angel. Each one had its charms. But the vacation was not without its foibles. There were the four days of no hot water, four days without internet and (sigh) four days of me shitting water. But overall, it was great, we made most suppers at the house and we ate and drank on beaches every day while playing a variety of games and doing crosswords. Also the snorkeling was great with the best coral reefs on the west coast of Mexico. 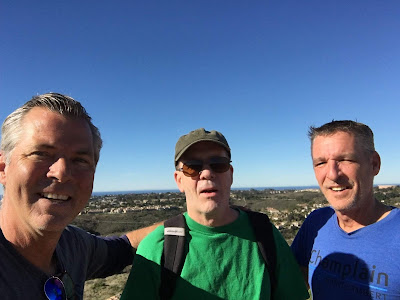 After Mexico, we came home for three days and then went for our annual visit to California where we did the usual, visiting friends and family. We had a nice 3 kings celebration with my mom and went on a nice hike with my dad. When I saw grandma it was the first time she didn't know my name. She did say, "You're the kid of one of my kids." So at least there is that. She kept turning to me and repeating, "The answer is, don't get old!" I found it charming and yet it broke my heart a little. It was probably the last time she will recognize me. Damn Alzheimer's, though she is gonna be 96 so normale.

I probably should have made all these events of the last 10 months separate blog posts, and hopefully that will happen this year. Let's make it special. Happy 2020 peeps! Thanks for stopping by.
Posted by tornwordo at 2:49 PM

Wait, we could've been stache brothers?

sounds like you had a great time..I have drank once in 28 years..and got drunk..my head still hurts..people that have known me for a long time always ask why I quit drinking..I said I was a happy drunk right up until I punched you in the face..good enough reason to stay sober..ha..

I have been following your blog for some time. I'm disappointed you don't update more often, but I'm also just grateful to read about your life. I'd love to hear more about your move to Ecuador.