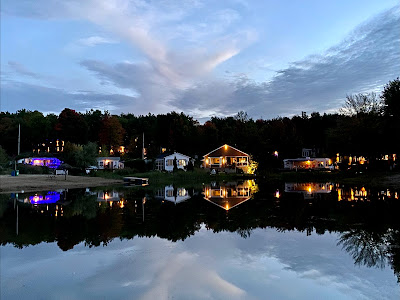 Greetings reader, welcome back. The last time I checked in, I detailed our journey moving to the country and buying a mobile home in a gay male trailer park/campground. Well, we pinched ourselves all through summer finding it hard to believe the luck in having ended up here. And as you'll see, the pluses keep coming. 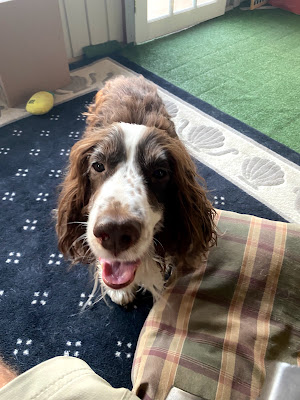 During the summer several friends came and visited and despite there being few official events, every Saturday a bonfire was organized with music and dancing in the forest. I grew a beer belly over the summer. Now I'm furiously counting calories so I can start the summer svelte again. We had a return babysitting gig for Chopin, the spaniel above. That dog needs medication. The most hyper and anxious dog I've ever known. 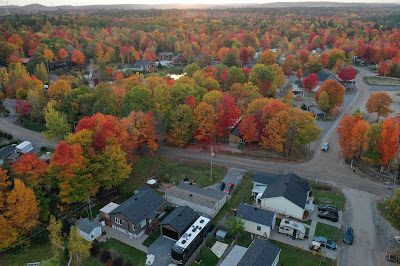 Our house is lower center here with the red and black car in the driveway. Autumn was spectacular here and we were bathed in fall colors for weeks. Our next door neighbors asked if we would be interested in joining the gay bowling league and we said yes, so we started bowling every Friday night with 35 gay men. It's duckpin bowling so the pins are a little shorter and squatter and the balls are smaller and easier to throw. We've gotten very chummy with our next door neighbors, dining with each other and playing games regularly. They watched George for us while we were in California (I'm getting there) and now we are keeping an eye on their place while they vacation in Mexico for a month. We've made more friends here in six months than we did in 20 years in Montreal. That's the country for you. I like it. 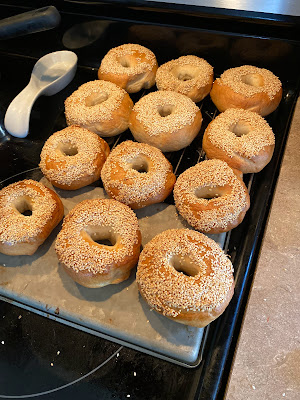 I continue to make bagels and we have discovered a wonderful Sugar Shack here that sells frozen meals that are to die for. They have this meatloaf with smoked meat and cheese curds in it that is the bomb! If you are in Quebec, I highly recommend that, the smoked meat spaghetti, the shepherd's pie (with cheese curds!) and the corn and bacon chowder. https://www.cuisinedudomaine.com/ 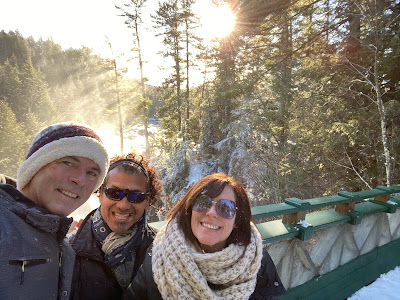 Autumn blended into winter fairly quickly in November and since the place where we live is men only from May - Sept, we were able to entertain our friends that included females. It's odd knowing my mom can't visit me in summer, but it would be maybe odder if my mom was here during the nudity months. 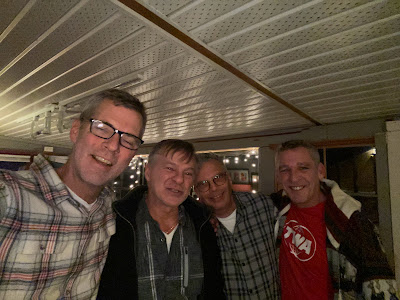 Our neighbors after a particularly well-oiled evening together. We bowled all the way into December and attended a Christmas party for the bowling league which was hosted by a catering chef and the food was fabulous. Right about then everything shut down again over Omicron, and we were itching to make the trip to California for the first time in 2 years. 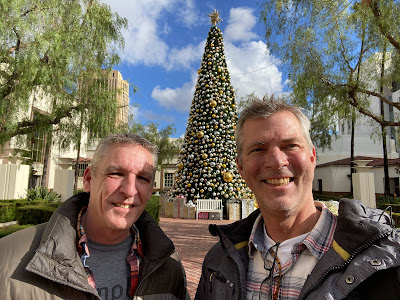 Here we are at Union Station in LA on Christmas Eve. We took a bus from LAX to the train station and then took the train down to my parent's neck of the woods. It was pretty cold in California for our visit and several days were rainy. 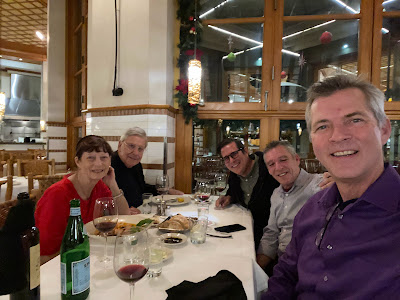 We didn't take very many pictures in California, but here we are on mom's birthday. It was great to see Dad too and friends we hadn't seen in many years. I reconnected with my old pal Jonathan who I worked with at the Ritz Carlton. We hadn't seen each other in over ten years. I found him on LinkedIn, yay. We also made a quick jaunt over to Palm Springs for New Year's and visited with friends who had relocated there during the pandemic. It's great to be able to stay with friends there. 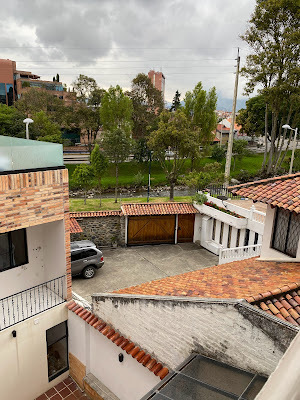 We came home from California for four days and then hopped on another plane to Ecuador. I'm not going to tell the whole story here, but that day of travel was the most stressful of my life. I will say that for the last leg of the journey, the airline staff was screaming (literally) to RUN, RUN RIGHT NOW in order to catch our flight as we went into security. Like a movie, just not a movie you want to be IN. But we settled right back into the place we rented last year with a view on the river. 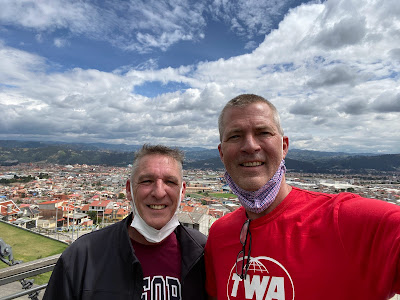 One day we walked five miles to the top of parque de la luz where the views over town were lovely. I worked an awful lot in Ecuador since I picked up an extra six hours a week in November. I wished I hadn't taken that contract as it felt like I was always at my computer. 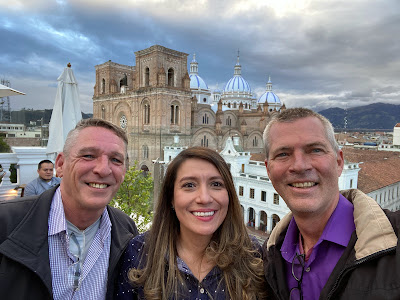 We were thrilled to meet our Spanish teacher in person. We dined at one of the swankiest rooftop spots in the city on the main square. It's called Negroni. We restart our Spanish lessons in March. But all the while I've been on Duolingo for at least an hour a day. My Spanish is getting good! It's wonderful to understand what everyone is talking about now in Spanish. 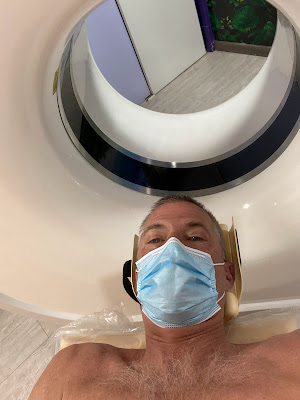 Here I am about to go into the tube for the CT scan of my thorax. We arranged a doctor appt via WhatsApp and the next day we met the doc, and had our scans a half an hour later. We got the slides and the full radiologist report. All for $140 each total. Doc says nothing too major to worry about but Serge has a hernia, and we both have artery clogging happening in our hearts. Doc says it's normal for our age. Getting old really bites. 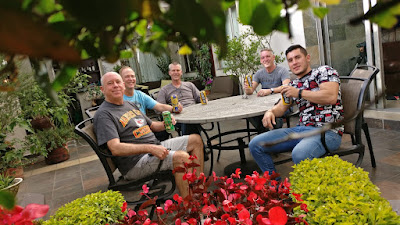 The last two weeks, we stayed with our friends that we met on a cruise ship way back in '16. In the foreground you can see Edgar, the houseboy who does all the work around the house 6 days a week including 4 massages. It seems gauche to say his salary here, but let's just say that we would all have one if it were that price where we lived. We really enjoyed our visit and we played cards and other games regularly. We talked about doing a big trip together in 2023 - maybe New Zealand and Australia. That sounds fun! 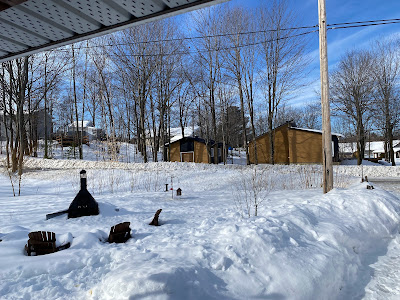 This picture was just taken from the front doorway. Looks like it's going to be a while before we can sit around the fire again. But just as sure as winter came, so will it go and we will have all the other glorious seasons before it comes back. Thanks for stopping by, and bundle up out there :)

The Titanium Sports - TITSINHL - Sports - TITANIAN
TitsiNHL is a new titanium spork hockey league based in Titsimani. The trekz titanium pairing first place is in Titsimani. rainbow titanium It titanium iv chloride is one of the most experienced sports titanium headers leagues in

I love reading your updates. You guys seem to be doing a much better job of planning for the logistics or retirement than I am, and it's inspirational to read about.

Love checking in on your adventures after all this time. Glad you’re both doing well!
LongStoryLonger :)