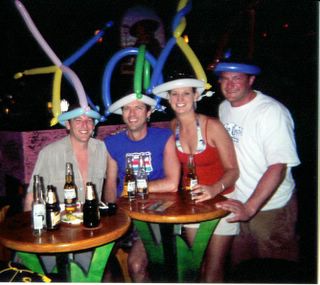 Inside the famed establishment

Have you heard of this place? I hadn't until we took our honeymoon cruise last October. Apparently some kind of phenom over the last two decades or so, you can now visit a Senor Frog's at a Mexican tourist resort near you. Go ahead, take a peak at the company homepage. (Oooh! So hip, so cool. They use the word "thingy" just like me!) Gag. If you have not had the opportunity to visit a Senor Frog's, your soul may still be safe. As for me, mine feels tainted now. Let me detail for you my one and only experience there. It lasted maybe 90 minutes.

One of the stops on our cruise was Mazatlan. (Home of the original Senor Frog's) We spent the bulk of the day on the beach saying "no gracias" to the peddlers and eating fish tacos. We were walking on the beach and happened upon a couple of people we had hung out with on the ship. You can see them on the right in the picture. (The girl's name was Shelby, and the only thing I can remember about him is that he was hopelessly in love with her -she not him and had said so- and that he was highly skilled at guzzling beer in order to dull his pain.)

"Hey, you wanna come with us to Senor Frog's - we're gonna stop there on the way back to the ship."

I must have been numbed by the hypnotic effect of the waves lightly lapping the shore because alarm bells did not go off in my head. That or that we were on vacation, and I didn't really care what we were doing. So we dopily nodded and said, "Okay" and headed off to hail a taxi. The taxi headed down the beach to the famed Senor Frog's. Looked like a big El Torito to me, and when we walked in there was a brightly lit gift shop with lots of cute t-shirts with trendy slogans alluding to how drunk you got at the place. How American, I thought. Hard Rock anyone? Yawn. We went into the bar where they had very loud music and waiters swarming around carrying all sorts of things. Glowsticks, jello shots, chains, balloons and cameras to take your picture. Everything cost something if only a tip. The waiters also wore aprons that when they lifted them up, a large, erect stuffed-cloth penis was revealed. They enjoyed coming up behind female patrons and rubbing it on their backs. Beers were ordered and I marveled at how many people from our ship were there, whole families even, watching their teenage children eat jello shots and writhe unbecomingly on the dance stage. At some point balloons were placed on the heads of all the patrons in the bar, and a conga line was begun. In the picture you can see me smiling. However, inside I was screaming with all my might: Get me outta here!!! Also in the picture above, note the 2 beers in front of me. I declined the full beer and was told, "No, you will have another one!" (I managed to give it to someone when they weren't looking though, he-he) In the space of an hour, I saw young and old alike down a dozen drinks and fall down and vomit. The final kicker was when the DJ started playing a song with the lyrics "It's gettin hot in here, so take off all your clothes.." causing all the young girls to jump to the stage and display their stripping routines they had often practiced at home in the mirror. (I have vile photographic evidence) We finally managed to leave in time to reach the ship. The time? Four in the afternoon. That was a trip to hell I thought.

And the business model. Genius,don't you think? Capitalism at it's best. The clever "extreme entertainment" (their words not mine) angle works like a charm: Let's attract underage drinkers to come and blow money while trashing themselves. All in the name of good clean fun. What? Why are you looking at me like that?

Maybe I can't let my hair down, maybe I'm too uptight, maybe even I *am* getting old, but you will never see me in another Senor Frog's.
Posted by tornwordo at 7:16 AM

Snarky is the right word to describe you.

So, if she wasn't into him, why'd she go on a cruise with him?

I can't believe they played that song. I just keep picturing you falling off your chair laughing when you heard it for the first time.

They were now friends, and so she took him up on his offer. He still held a candle for her, but she was rather cold to him about that.

are u kidding me..i went to cancun for spring break this year (07) and senor frogs is AWESOME. i went there twice and had a good time both times, ur just old and crazy.

and theres a really hot waiter there at the senor frogs in cancun..he has dirty blonde hair, hes kinda short, he has a glow in the dark tongue ring !, blue eyes, hes gorgeous.

anyone whos reading this and ever going on a vacation or something with a senor frogs nearby..definitely go