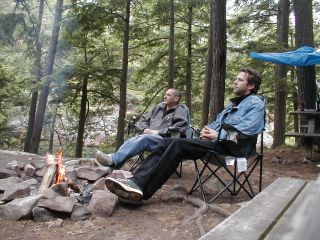 Hanging with each other.

It was so cool to go camping. Both in the slangy and temperature sense. We arrived during a downpour Friday evening, and the sun finally shone at 5 Sunday afternoon. Hence swimming was out, but we found plenty of other things to do, including a three hour tour (insert gilligan's island themesong here) of the 1000 islands region. All along the way, little tidbits of information spilled out of speaker boxes, the recording running through in English, and then a second time in French. Did you know that this is the birthplace of thousand island dressing? (Oh my god honey! Did you hear that? This is the place where someone got the idea of putting mayonaise, ketchup and relish together!) There was a millionaire's row sporting the getaways of the rich and famous. There was even a veritable castle. Serge loved analyzing the architecture of everything, and I watched the sky interplaying with the water and landscape.

Since we arrived during rain, we had the chance to save face and went to the local town and purchased things that we forgot to bring before actually setting up camp. Things like water. We actually brought no water and no container in which to put water. Paper towels, napkins, kleenex, all overlooked. We picked these things up and went back to the campground once the rain had stopped. We clucked about the beauty and serentity of the place as we set up camp. I can't lie though, it was chilly, wet, and muddy. I made hot dogs and served them with pasta salad. I tossed a bit of my hotdog into the forest, and Serge said "Still!?"

You see Serge has been worried about me. It all started after I experienced some kind of event involving the sky (mysterious, I know) which led me to start putting out food in a "spirit plate". It took him several days before he discovered the plate in question, and when he did, I heard him yelp, "Believing in things that don't exist," shaking his head in utter disbelief. I chuckled and shrugged him off, "Oh it's just something I'm trying."

For the record, I am very bad at doing the spirit plate. I often forget to do it, and really only manage to consistently do breakfast. I never want to give up some of whatever deliciousness I've prepared myself, but then I think that that's part of it - practicing sacrifice. Also, I take a moment to express gratitude, and really try to feel it before I eat.

Serge especially doesn't like it if I put a bite of my steak on the spirit plate.

So it had been a few months and I hadn't realized that my behavior was worrisome to him until we were out camping, lounging around the campfire, soaking in the sounds of nature around us.

The second night, he came back to the topic.

"So tell me again why you put the food out, I mean for who?" Serge asked again, full of concern.

"Oh, you know, to say thank you for another day. And to who? To say thank you to all the powers, coincidences, mistakes and magic that led up to this day, my place in it, and my ability to be aware in it." I tried to explain.

"Thank you! See, I can say "thank you". You can give me the food, and I'll say thank you for you. Really, you're wasting." he pragmatized.

"But I think the point is to show your gratitude with a kind of gesture. Giving up one bite never hurt anyone. How about you - are you grateful for some of the things we are experiencing this weekend camping?" I asked, trying to convince myself even.

"Where are the tomatoes?" he changed the subject.

"Oh they're in the car, here's the keys, and hey, why don't you bring up the donuts while you're at it? (the campsite was up a small hill from the car)

"Tomatoes and donuts, got it." He fled.

When he got back from the car, he announced that he would be making sergelettes. This, for the uninitiated, would be an egg based meal with whatever handy items available thrown in. Thus, the tomato question. The sergelettes were divine, as most anything is while camping. And then he started up again.

"So what spirit again are you feeding?"

"I don't know. Call it the universe if you wish. I mean look at what we've lived here already in 2 days - all the wildlife we've seen, the beautiful scenery, the cruise through the islands, cozy nights in the tent." I said.

"And the geese, and the ducks and the birds singing in the morning," he joined me in reciting all the good things, " and the color of the water, and the chipmunks."

"Yeah, and the sky has been spectacular, and we have loved the campfire sessions. I don't know, I feel like we should thank them or it, or him or her for that." I said finally.

And just then, my heart softened and turned to maudlin. It was like the smallest sliver of light penetrated way down into the depths of him and for that , if for nothing else, the spirit plate has been worth it.

We spent the last day going on hikes and having a picnic. It seemed that there was beauty everywhere from the smallest patch of earth, to the whole picture of sky and terrain and water.

Going out and really hanging out in the wilderness rights you somehow, like free medicine that stuff is.
Posted by tornwordo at 6:18 PM

Thanks for sharing this with us. What a wonderful gift.

Would it be shallow of me to say you look very cuu-hute in the campfire pic?

You made me cry. Nice dialog too. Really beautifully written.

I really like this side of you. My first memory image of you usually involves your other side: pragmatic, realistic, black & white. Fun, absolutely! But if anyone was going to change your mind about something, they'd better be able to prove it.

There is something inherently balancing about you delving into thoughts and feelings where you don't have all the answers, and where there are no scientific methods to reveal them.

I always saw glimpses of that in you, but it's really blossoming now. It makes me miss being able to see you more often.

In some ways, though, this blog reveals portions of your inner life that I might never have been capable of sharing with you in person.

Thank you for the thoughtful gift, my friend.

Yes, I cringe at my youthful know-it-all ness and cut and dry perception of things. It stings when you bring it up, but I'm sure I have much more than that coming, lol.

Thanks for the kind words everyone, and the best part is that it really happened like that!

I;m with Serge, I think you're going crazy. Maybe you need a brain scan! I don't mean to bust your bubble (yeah I do) but you must know who really eats that spirit plate.
It's the bugs, you know the ones that will inherit the earth after we screw it up.
They don't need any help from you.
I do agree with one of your nicer friends that you looked very cute in that picture!!
Donna

I'm at a picnic. The table is covered with delicious food: watermelon, fried chicken, chocolate cake. Everyone's having a great time.

We're laughing and enjoying the meal, old friends who haven't seen each other for some time.

"Sure, we say." We're feeling especially open and friendly today. "Wow, you even brought a big plate of something to share. What are those?"

First time I have read this one - what a beautiful post... a spirit plate - wow, what an idea.

You know that this post speaks volumes about you both... you are very lucky men...