Do you know about or remember those "Love is" cartoons? They were always kind of sappy and corny with the title "Love is" at the top and then two naked children were performing some kind of act ( I always thought it was weird about the naked children) and at the bottom of the cartoon it would say something like "sharing an ice cream cone" or some such blather. Here I'll go find an example for you. 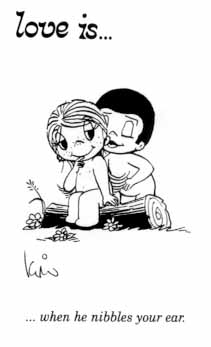 See I told you they were naked children.

Anyway, I thought of a new panel for this cartoon that I'm sure that they haven't done yet.

See, yesterday morning as spouse and I were at our respective computers, I had to let one. As it was just us, I made no effort to muffle it, but as it happened, it slid out quite silently. As the odor reached my nostrils, I thought, "whew, ripe" to myself and continued looking at my screen.

A few seconds later, spouse poked his head up over the monitor.

"Hey, what did you make? I want some!" he said in a whiny, hey what about me way.

I looked at him and asked, "What do you think I'm eating?"

Chuckling, I thought about the cartoon and how the panel would say: Love is....mistaking his farts for egg sandwiches.

Needless to say I was charmed and spouse was rather revolted once he discovered he was salivating over the smell of my innards.

Good times.
Posted by tornwordo at 6:33 AM

LMAO! Ok I was both laughing and disgusted at the same time!!

Charming and revolting...yeah, that's what it was.

I read somewhere before that you knows it's love when you can fart in front of them...and not get a nasty reply in return. Or something like that...

I would love to see the "Love is..." cartoon for this one.

Mark that as the third time I've officially muttered, "Gross," while reading your blog.

Hahahahahaha, that IS love!
That's exactly what Howard Jones sang about.

ROFL. omg this was so funny I can't stop laughing.

About farts Mrs Coffeedog would say - Love is walkingout of the room when you know you have stinkies.

Again I say to you, you are one classy bitch.

Makes me wonder how you prepare your egg sandwiches...

heehee thanks for the belly laugh!

I wonder why no one complained about two nude children telling the public what love is?

Ewww yuck. Your flatulence proved to be me muse for the day.

And I remember a book of Peanuts cartoons from my childhood called "Love Is"; with the one that sticks out in my memory being "Love is a warm puppy". They had the decency to keep their clothes on though.

And Phew! At least you didn't post a picture of your wonder muscle for HNT.

Sounds like a relationship made in heaven... that really made me chuckle! THANKS!

I loved those love is ads, I was so naive

Love is... trying to keep a straight face and not laughing while lying through your teeth so as not to hurt someone else's feelings.

Come on, Torn, how did you not giggle when Serge asked you that?

OMG! That is completely insane. I just don't know what I would have done if I had been in the same situation as spouse. Maybe think that there is something after all to that wonderland called scat.

Please stop...my natural spring water is coming out my nose. That is sooooo funny. No way could I not have broken out in a hilarious laugh when spouse said what are you eating over there? And to say I want some of that? I can't stop laughing OMG FUNNY!

I have only read 2 of your entries. The first one was about shitting on the floor and then this one about your egg farts. I love your humor.

I read this early this morning but had to leave for a bit as I was eating, of all things, an egg salad sandwich for breakfast. You and Spouse are just adorable.

Who says romance is dead.

Boy, Girl and I are all laughing helplessly at poor Uncle Serge.

I have a night light from when we used to camp in a trailler tent.

It's a pink heart with the girl saying, Love is...rubbing his back.

That why I keep coming back here! I never know what kind of "treasure" I will find. What a hoot!

My favorite aroma is Asparagus and beefsteak fart. Next to fresh lavender bouquet, of course

Ok, that's funny but gross at the same time. :P

Ah, the joys of sharing. I happen to like the smell of skunks. It's like Pleasures for free in the forest.

That is too funny! Now I have to explain to my partner what I'm laughing at!

When I worked at the country club, one morning I said, "Oh. My. God, what is that SMELL?!?!" Someone asked me, "Did Herb just leave your office? He always farts right before he walks out." It was rank.

Well, now I'm grossed out for the day!
I don't think I could've imagined combining a Love Is cartoon with farting in the same posting!

Where is that little girl moving her hand to, anyway?

I CANNOT BELIEVE I MISSED THIS ONE.


Oh my God, this is classic.

That's too funny for words, how did you ever pick yourself off the floor and stop laughing after he asked you about egg salad.

This is what happens when boys are allowed to mate with one another. Farting as a symbol of love. I can see why the right wing is trying to put a stop to this.

i wonder how many years before i can attempt eating egg salad again.

That is priceless...I actually can hear it as a Mastercard commercial...."mistaking your spouses farts for a delicious egg sandwich....Priceless!!"

We used to play, "Guess What I had for Lunch". It was a smell game.

Heh, hydrogen sulfide is always fun fun like that.