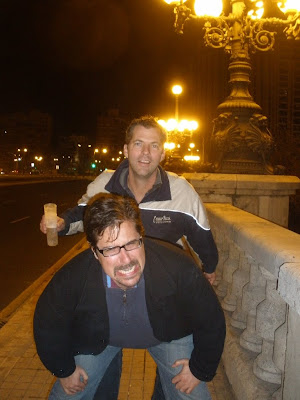 So I've been poring over all the photos from all five camera toting people trying to find the best ones. I came up with what I thought were the top 135, though I'm sure others might disagree. For example, this shot did not make the top cut. The things people do after cocktails. So funny. There is a hilarious video of my brother and I talking about, well let's just say nasty things, and we didn't know Serge was filming. When I watched it yesterday I turned all red, did we really talk about THAT??? Apparently so. And it was worse for brother. No, I won't be showing it and no I will not send it to you privately by email either, so don't ask. 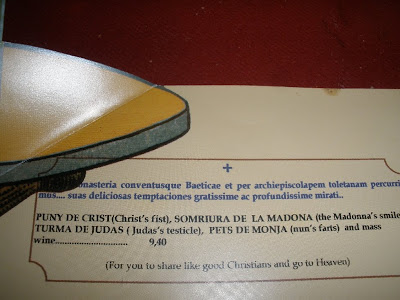 Oh this was interesting on the dessert menu in Barcelona. It had been a great meal and we absolutely couldn't eat another bite but when we saw the Judas's testicle, we just had to order. Sadly, they didn't have this dessert. Incidentally, there is a dessert here in Quebec called nun's farts too, but no testicular sweets. 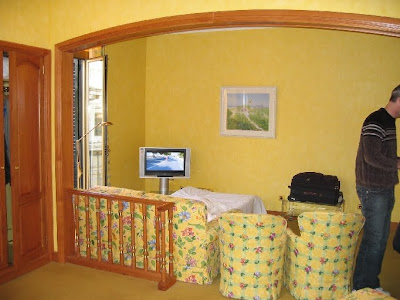 As I was going through the thousands of photos (I shit you not) there were so many that flummoxed me. Like this one. It was from Serge's camera. I just had to ask, "What were you taking a picture of?" He replied, "I don't know the room or the yellow or something." See I think I'm going to give a tutorial next time on taking pictures. I'm no expert and I've never even taken a class, but I know that that is not an interesting shot. It must be because I've taken so many failed pictures that I don't bother now unless there's a chance of it being good. First of all, choose your subject. Then, make sure your subject is lit (I could go on and on about this. In Hawaii, I saw all kinds of people taking sunset pictures with people facing the camera and no flash. I wanted to run up to each one and yell, "Pull your head out!") adequately. 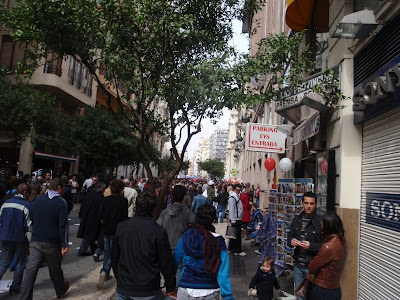 For example this shot. What was it supposed to be of? The crowd? The shop sign? The tree? I just couldn't figure it out. It's not bad, it's just not that interesting. My dad once told me that pictures without people are boring, but as you can see here, having people doesn't necessarily mean it won't be. Nowadays, I don't believe that about people, because we got some great peopleless shots on this trip. 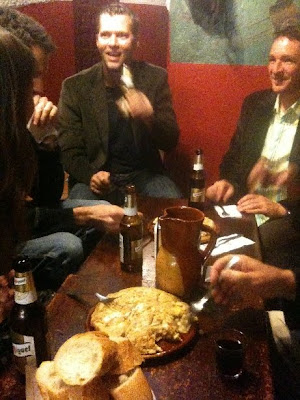 This came off my brother's iphone. No flash in a dark tapas bar and it came out great. I made one of those tortillas last night. Actually, made a whole plate of tapas in the typical Spanish . I found the thinly sliced Serrano ham, Spanish olives, chorizo, and I've been making tortillas for years now. One great thing was the tortilla dish I got. It's a plate with a stand/handle so that when you flip the omelet it's easier. Worked like a charm last night. 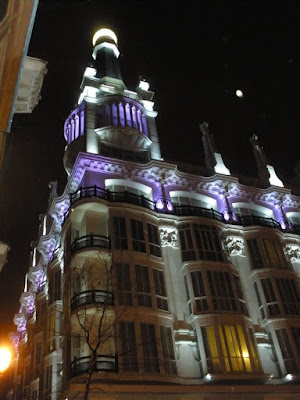 I almost never take pics at night if I don't have a tripod or a surface to put the camera on. I took a chance on this one though and success! 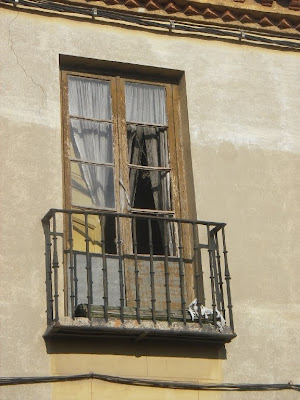 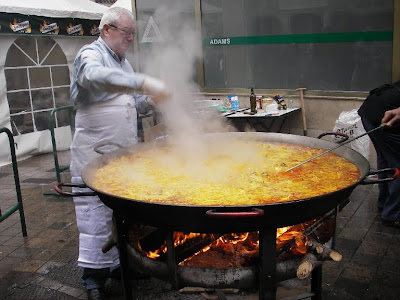 Another great one in my opinion. Any real photographers are welcome to set me straight. I fully admit that I'm probably talking out of my ass. My methods are totally borne of trial and error. Speaking of setting me straight, there was some obnoxious comment on the blog while I was gone. Can't remember the post, but it was something along the lines of "you sure travel a lot, so shut the fuck up about your life's worries." I could only imagine a bitter person would enjoy dumping on someone while that someone was on vacation. Additionally, I would like to state for the record my immense gratitude at the traveling opportunities I've had this year, but since most of it wasn't really paid by me, I think I'm still in my rights to worry about retirement and my job situation. Ah yes, before I left I wasn't sure if I'd have work after this week. Well the universe provided again and I got ten full time weeks starting next week. It's true that I should stop worrying about that, as something always seems to come through. 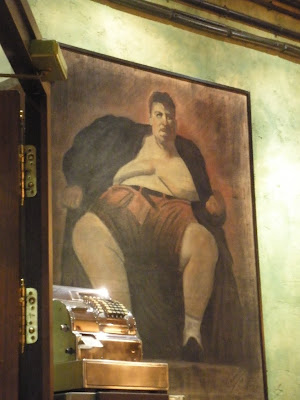 Finally, one of my fave shots of the trip. On our last bar of a night of tapas bar hopping there was this painting. I wanted a shot of it but was rather in my cups so I just took it from where I was sitting. The cash register ended up making the shot for me. I've got an 8x10 of it on the way.

You can see all the best shots here.

Please forgive my absence from your blogs as I haven't had any time since coming home. I hope to get that all rectified by the end of the week. Smooch!

Posted by tornwordo at 4:01 PM

I think some people have a natural eye for photography and some people just get lucky sometimes. A friend of mine takes millions of pictures all the time, and out of those shots, only about 10% are awesome. The rest are gibbly.

I think the snarker was just jealous, who wouldn't be? You're so fabulous! Most of us do a better job of expressing our jealousy in a kind and loving manner. :o)

what great pix; glad to hear you had a good time! I have vicariously had a trip to spain via your blog!

and that last painting...looks like some guy from south philly...

But wouldn't your parents just LOVE a framed enlargement of that picture of you and your brother?

(Just joking. Don't actually give them one. You might get hurt when they beat you over the head with it.)

Glad you had a great time on your trip, but....what about Montreal's most adorable pooch?!?

I went through your picture album. Some of those pictures have stories that should be told. I love your travel posts.

Your gratitude is evident in just about every post, so Magnolia should take his/her own advice. Don't listen to fly-by commenters. We know your heart, and it's good.

It always seemed to me that taking lots of pictures increased the chances of some being really great. But, then again, the only digital camera that I own is on my phone so I am clearly not thinking seriously about photography.

The cash register with the gluttony guy seems to make a statement.

You have been very upfront about the funding for your travelling and full of gratitude for your family's generosity, dont worry what passers by say.

I'm hoping that you use a top of the range camera to explain why your pictures are so much better than mine!!!

How is the hound?

I, for one, enjoy your travels. The photos are great. Don't let a jealous sour puss take up any of your time.

I also enjoyed that members of your party were drinking Murphy's Red Ale. It's a favorite of mine, which I can't get here.

You all look like you are having a great time. Keep on keepin' on.

Nice photos. I am like you, take hundreds and only get maybe 20-30 good ones.

Count me as jealous about your travels, but I would not poo poo you at all, ever! In fact, I may ask you for more details about Spain because it looked like such fun, and Mrs Coffeedog's father is from Spain...we have to go someday!

xoxo off to the Botanical Gardens today, like you I am a geek for the Gardens!

I am another photo amateur, seems like it's all about lighting, but I'm too unskilled in dealing with it, I'm almost leaning towards a basic photography course. The only thing I have going for me is an excellent camera that's smarter than I am - it's a panasonic lumix dmc-tz3. The pictures it takes make up for a lot of my shortcomings. I also agree with Birdie - some photos deserve a story.

well i heard the lady at wmtc.ca talking about you being in spain although you say you have no money. so i'm not the one who first brought it up. if you can keep mooching off people to get free trips the more power to you and that little man you live with.