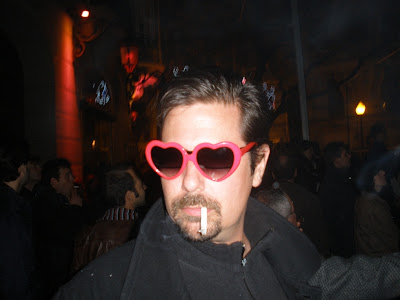 Well that last night in Valencia was a wild one. Bro liked this picture we discovered the next morning and said that if he were on Facebook, this would be his profile picture. He was a little upset for having smoked since he had been clean for 2 months, but hey, it was a party. 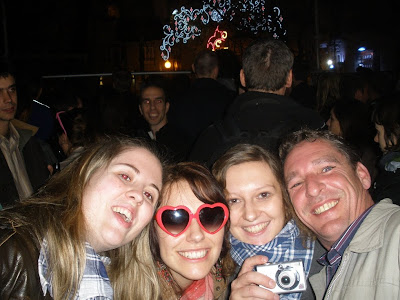 It was easy to blame Julie who kept plying us with some kind of rum punch she had brought. While we were waiting for the burning of the fallas to begin, we drank in the street and met these girls from France. They howled at my accent as all the Frenchies from France do. I think it would be like if a French person learned English in Texas and had a kind of French drawl. It must sound really weird to them. 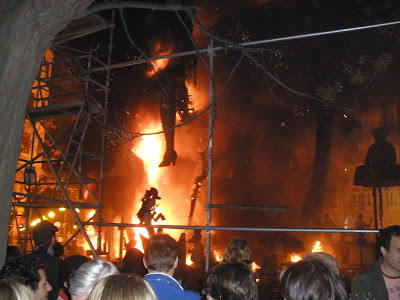 Then they burned and burned and wet ash rained down on us. Firemen were on hand dowsing the flames so that no one would get hurt. 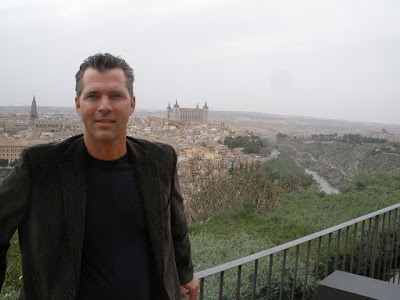 It was a hangovery drive to Toledo the next day. Toledo is an ancient city, some might say the birthplace of Spain. We stayed just outside the town at one of Spain's Paradors, the government run chain of classy hostelry. 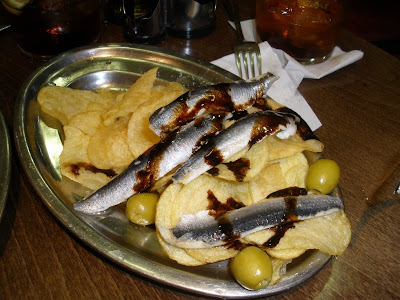 We have been enjoying the food immensely. I wasn't all that into this dish, but I loved the anchovies in vinegar. I don't think I've eaten as many olives in all my life the last week, but I think it will be a nice new habit to take on. 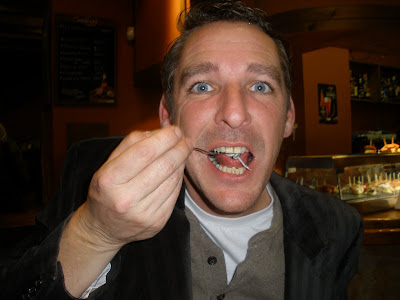 Ooh look, here's Serge eating baby eels. I had some too and they were pretty much like eating noodles. Hard to wrap your head around though. 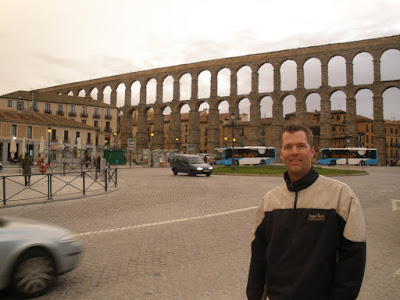 Then we went on to Segovia. Here you see the ancient Roman aquqeduct that carried water to the city for many centuries. It was in use until recently. Those Romans sure knew how to construct things. 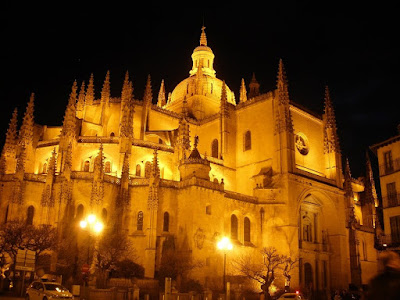 Serge keeps saying everything looks féerique which is translated loosely to fairy-tale like. It's true I must admit. This is also in Segovia. 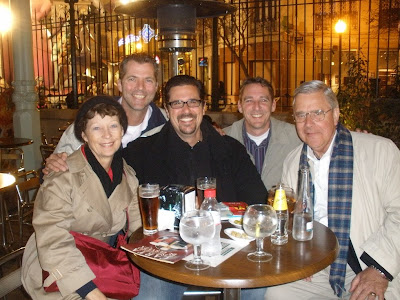 We finally got a shot of our whole gang together. We have been travelling in one luggage packed vehicle and sharing two hotel rooms. Cozy but fun. You wouldn't want to stay in our room though with me Serge and bro because the farting contest has really been serious. Serge is still in the lead. Today we head to Madrid. Later!

Yeah, I think I'd demand a separate room, but damn do I miss Spain.

I'm curious to know what the fallas are made of?

Its a great picture of your brother, hopefully the smoke is not the first of many.

I'm not surprised your room is malodorous with the variety of foods you have eaten, good job there are no naked flames!!

Another beautiful holiday.
Glad you're enjoying it.

Beautiful places, beautiful faces. You have such great travel posts.

I think I can live w/out sharing a room w/any of you - let alone all three of you. No offense.

The pics are great. The trip seems magnificiant.

Great pics again and running- commentary. You may be overlooking your true calling.....a travel advisor/consultant! You are very good at it. So much for those teaching contracts!

Valencia? As in oranges? Yummy. The rest of the food...no thanks. Hope you boys enjoy!

Wow, Spain is gorgeous. You're making me want to go, particularly to Toledo. Keep on having fun!

sweetheart i dont think its your quebecois accent its your voice. you sound weird in english. plus please no more whining about having no job or money or retirement when you go to cuba, spain, on a cruise, los angeles, las vegas, chicago and thats just last year. so STFU.

Looks like you're having a blast! Thanks for sharing your posts.

Me so jealous - the trip looks awesome.