Grab a cuppa and sit a spell

I've only been home three days and now we're heading out tomorrow on a roadtrip! We're going to tule around la belle province. Tomorrow we'll stay in Quebec City and then we are going to the fjord up by Tadoussac and cruising around the Lac St Jean area for a couple days. Don't worry if you don't know these places, I didn't either until I moved here. 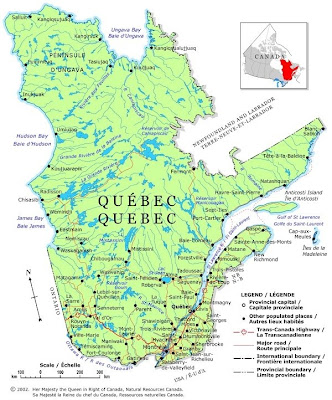 Lac St Jean is the blob of water North and slightly West of Quebec city. You can not see across the lake it is so vast, just to give you an idea of the area. Quebec is the largest province by area and is only slightly smaller than Alaska. (Though it has 11 times the population of Alaska.) Geography lesson /off.

Remember the diet pill scam I talked about last month? Well I canceled the orders the following day and also changed credit card accounts. Still, I received a bottle of pills called "Maximum Burn". Oh my sweet baby jesus on a pickle, they might as well have called it speed capsules. Yikes! I'm sure these things do work for weight loss since my heart palpitated well into the night. I don't like the feeling though, a little coffee is enough palpitation for me. Of course after I felt the strong effects, I researched the ingredients (yes, the wise among us would have done that before ingestion) and there is one that is essentially the same as ephedrine, the substance banned years ago from these kinds of supplements. There's more to this story though. I checked my credit card balance since we're about to head out on a roadtrip and there was a new charge from a differently named company for a buck and a half. WTF? I called the credit card company to dispute the charge and inquire how it was possible that a merchant could charge something to the new credit card number when I hadn't given them the number. Get this. The lady told me that they update the information to merchants. What? I clarified, "You mean you gave out my new number to a merchant without my consent?" Not only was the answer affirmative, but the onus was on me to find, print up and fax proof of my canceling with these companies. You can probably guess what I did. Yes, eighty-sixed that credit card. Not only that but CIBC will never have a shred of business from us again. Sheesh! (You would have laughed when I cancelled - "We are very disappointed to see you go, before we cancel your account can you let us know your reason for leaving?" "Because you're giving out my new credit card number to internet scam merchants, that's why!")

I have a perplexion lately. See I carry around a Chapstick in my pocket and every time I use it, it is way out of its sheath (think Georgie peen). I don't understand. Is it the heat or is the thing turning in my pocket or what? It bothers me every time because it doesn't make any sense!

Does everyone know about Father Tony's quest to be the travel guru for gaytravel.com? I've voted for him, now have you? He would be eternally grateful for your support. All you've got to do is register (free, painless) and then vote for him at this link.  I'll be seeing Father Tony next week it seems as he and Joe from Joemygod are coming up here to cover the DiverCite festival.

Sometimes I'm reminded about the homophobia in the world from the oddest places. I've got a video on Youtube that I took of a guy who was stuck in the snow. I don't know why but it's had thousands of views with people commenting on the car and if it's 2 or four wheel drive. Several of the comments though are like this latest, "I think your (sic) a homo." Well how astute of you sir. I can remember a lifetime ago when those words would have stung me with shame, but now it just makes me marvel at the long road we still have to go in being accepted in society. Of course I watch the video and try to figure out what gave me away. It's not that mincy is it? 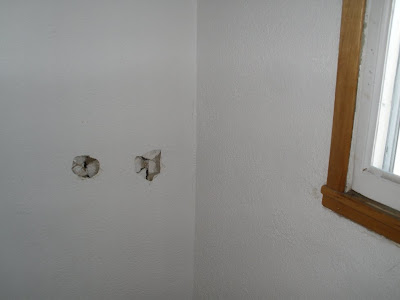 Look what we discovered this morning. We were both woken up at three in the morning to slamming doors. Turns out the girl (in nude dancer's old apartment, questionable energy up there) was having some kind of altercation with her boyfriend or ex-boyfriend. I could hear him yelling and her crying. Apparently when he stormed out, he punched these holes in the wall in the common area passageway. What the hell is wrong with people? Serge wanted to call the police while it was going on but I convinced him to text her instead. She wrote back, don't worry I'll handle it. You'll pay for it too if I have anything to say about it.

Okay, I haven't even begun to get around to the blog buddies and now we're headed out again. I'll have to rectify that when we get back. Did I tell you about the unemployment? I got approved but of course don't get paid for the time I was in California. That was funny too. When I filled out the form on line, I was told that I must call a certain number to clarify my reasons for "not being available to work". Well the number they gave me didn't work from the US though they didn't mention that. So I tried and tried in vain with a capital V. Finally I tried different numbers and the one to "change your direct deposit information" worked. Then I got a contract that starts next weekend so I probably won't get but about 7 days of benefits. It's funny, I'll work enough to not get benefits but I won't make as much as if I didn't work at all and just collected. Of course I'm going to take the contract, but I'm sure many others in my situation don't. Wow, I started to sound conservative there didn't I? Damn freeloaders, get off of my lawn!

Okay kids, I'll try to post from the road somewhere but if I can't, I'll be back next Thursday! Ciao and peace out!
Posted by tornwordo at 9:36 AM

I can't even handle regular coffee anymore, the palpitations drive me wild.
Crazy stuff about the credit card.
The drywall? California Patch, dude! I could have that repaired for you in no time!

Hey, enjoy your tour de Quebec!
n lieu of coffee because it too causes me palpitations, I drink 'matcha' green tea.....doesn't make ya crazy, but gets ya goin'.

At some point I want to get back to see Vieux Québec and Île d'Orléans, and I really, really would love to go camping on Gaspé.

We miss your posts. From one sic homo to another, have great fun in Quebec City!

I hope Georgie is going to Quebec City. He deserves some time off.

Were you still on those pills when you wrote this post?
Have fun on your road trip, Québec (what little I saw of it last winter) is beautiful!

When I was in college, I accidently kneed the wall next to mi cama when I was asleep! I somehow was able to pull the plaster out a little bit to make it a touch less concave, and I found the wall paint in the basement, and covered over the most noticeable cracks. Somehow it worked! Landlord didn't notice!

Take lots of pics of Lac St.Jean. I hope to go there one day.

Sounds similar to my credit card issue...heart palpitations and all. Be careful, canceling credit cards hurts your credit score...well, at least here in the USA.

Enjoy you road trip; Im' off to Greece.

I might leave a can of spackle near your tenant's door as a hint...

It's so weird to spend a summer when I don't see you! Have fun, and be good!