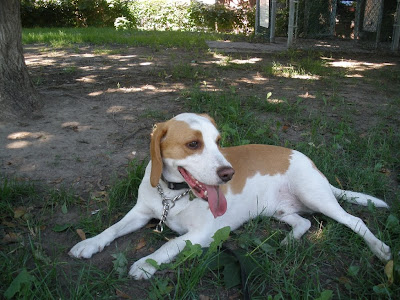 That's his new thing there. He runs around at the doggie park and then when it's time to walk home, he stops at every shady spot and lies down. He will literally go limp when I tug on the leash and let me drag him while he gives me the stinkeye. Yesterday it was really hot so I took the car to the doggie park to avoid this behaviour but he still did it on the way to the car. He doesn't like the heat much, he's much livelier in cold weather. 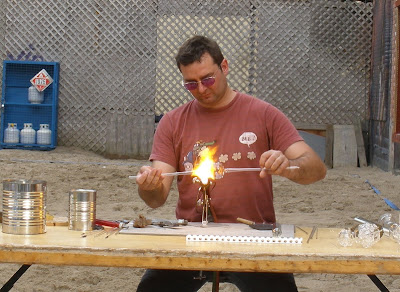 Our friend Ida who lives in the sticks came to town for a little hubby free vacation and dragged Serge and me and Daniel out on the town. We started down in the village to stroll through the arts festival and we were mesmerized by the glassblower. It's just so weird to see it bend. 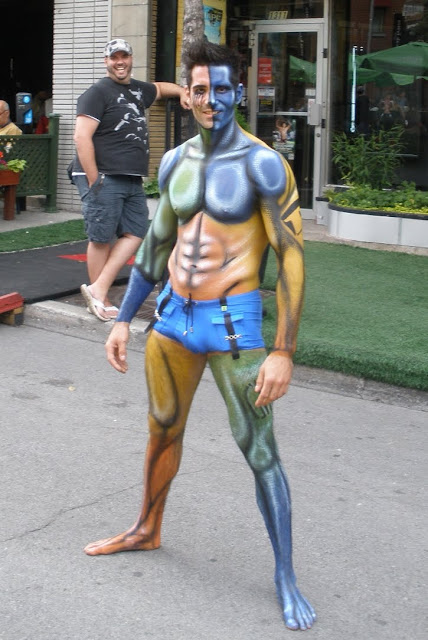 A little further up the street there was a guy doing body painting. Except for the swimtrunks, it's all paint. It reminded me of a living cartoon. I have another shot where all the men on the adjacent bar patio are ogling him. It's kind of pathetic though. 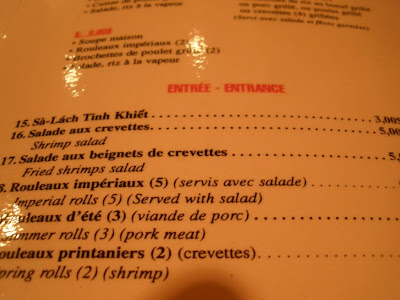 We decided to seek out an old Vietnamese restaurant we used to haunt many years ago. The appetizer (entrée in French) section cracked me up. They did their homework and looked up the word in the dictionary. Entrée does indeed mean entrance; however, they needed to scroll down to meaning number two in the dictionary. Pork meat is funny too. Like saying beef meat. 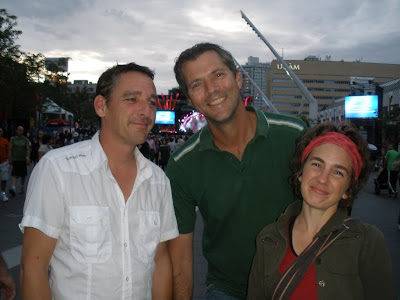 Daniel's not in the picture since he forbids me posting him here. He did take the picture but only after fruiting around with the zoom ten times. Hence the thinly veiled irritation on our faces. Well not mine, but I'm faking it. This is down at the jazz festival where we walked around enjoying the free shows for a while. I get uncomfortable around crowds though. It was at the jazz festival 15 years ago where I panicked when the crowd all decided to move from one venue to another and I got trapped in the flow. I ended up climbing a fence to get out. Ever since then I've been leery of any place where there are tons of people and I'm always surveying my exit strategy and making sure I'm at the fringes and not in the middle of the crowd. It might be construed as a personality defect, like being a Republican or being a smoker. We've all got one or two, right? 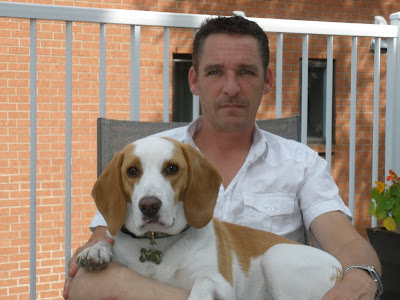 Although the lighting is not ideal, I love love love this picture. My stoic boys.Yesterday was a quiet day. We puttered around the house and I got the laundry done and started packing for my trip. Today I've got to go to the bank and get some US dollars. In honor of the fourth of July, I had a hot dog for lunch. That pic is posted on Facebook as many of you know. Here's another one that makes me laugh. 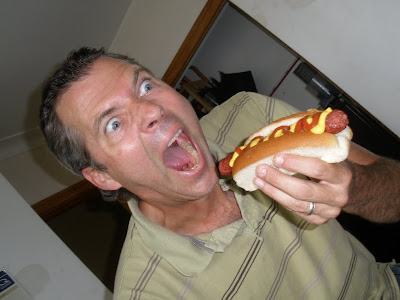 I won't be posting as regularly over the next two weeks because I'm on vacation from my vacation. What? Well I'm heading out to California for my annual summer visit. I'll post from there at least a couple of times but I probably will be largely absent from the blogosphere. I look forward to disconnecting a bit. Don't miss me too much now!
Posted by tornwordo at 7:25 AM

Vacation from your vacation...only you would do that. Enjoy!

Love that pic of Georgie & Serge.Have a great vacation! We're headed home from ours this afternoon.

Love the pix, especially the hot dog who doesn't want to walk, and the 'dog' who's ready to attack an hotdog!

It's okay to have a plan when dealing with things that make you climb fences, mental or otherwise.

I'm like Georgie...I can't handle the heat either. Thankfully, it's been blissfully chilly here lately (in the teens) but the weekend is supposed to be a smoker.

I wonder if I could paint some abs on myself...have a great vacay within a vacay! I need one too.

My hubby Greg looked over my shoulder as I was reading this post and saw the pic of Serge holding your dog. He asked, "Is that Bruce?" So that makes two of us who think Serge looks like our friend Bruce in Florida.

I am broken that I'm going miss you and Vegas this summer.

I don't do crowds, either. I *so* sympathize with your need to climb the fence. I yell at the traffic, telling all the other people to go home because I'm out now.

I'm with Georgie. I don't do heat well.

I will miss you a little bit, how 'bout? Have a good trip.

Have a great time visiting California!

have a great vacation!

Will Georgie be guest blogging in your absence?

Have a great trip.

I had a giggle out of the picture of Serge and Georgie. So solemn! All I could think of was "American Gothic".

I sure wish I could just blink Georgie here to stay with Indi and me while you're away. Enjoy your trip, friend.

Personally, I love the pork meat.

Have fun on your vacationing vacation!

Hope you have a great time in california---love the photo of serge & georgie.

Your dog is beautiful! I had a basset for 5 years, and he was the best! I miss him terribly! They're wonderful little dogs!

We'll be followin ya,
Wiggles & Giggles,
Lucy Lou & Her Human

I so love the picture of Serge and Georgie. He looks like he is about to bite my head off. He is so intelligent looking and deep in thought. Oh yes, and Georgie looks great too. Ted

We those shorts painted on that guy too?? sheeesh.

Pics of Georgie always appreciated - oh and Serge too. Have a good trip.

Have fun [aka get bored and come back to the blogosphere...I always look forward to your postz/funny commentz/PICTURAZ DE GEORGIE!