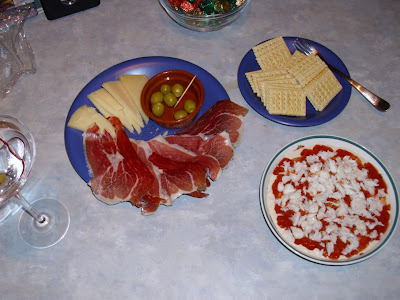 I paid a visit to the Spain store, L'Espagnole, where I grabbed some Serrano ham, Manchego cheese and my new favorite snackfood and martini garnish, anchovy stuffed olives. I was hoping Serge would hate them so I could have them ALL, but they seem to be growing on him too. Also, I made crab dip which is a recipe that my aunt served when we were up near Seattle, but as it turns out, I already had in the recipe book that mom made for me a few years ago. It is super yummy. This ended up being dinner for us on Friday night. 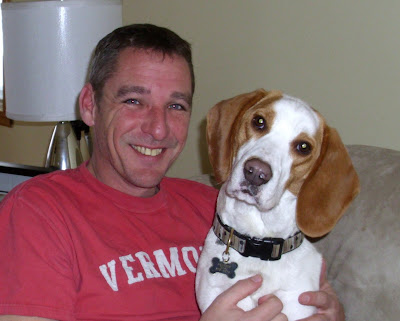 Serge's mom came over for a visit and we hung out in the living room chatting away the afternoon. Since there were snacks on the table, Georgie was very attentive to everything going on and in order to get him to make this look, I said, "Do you want a ...?" He doesn't care how you end that sentence, he wants it. 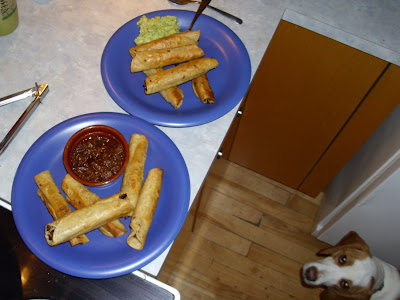 I also made a big batch of taquitos. I let Serge make a pot roast and then once it was chilled, I tore apart all the meat so it was a big stringy pile. Then two by two I zapped the tortillas to soften them up and rolled up the meat in them. Once done, I put them in the freezer so they would keep their shape. Then I fried 10 of those suckers up. Serge used the drippings with onions as his sauce. I can only eat guacamole with them. I was only slightly irritated when Serge said he liked Trader Joe's better. Tough titties, we don't have Trader Joe's here. We've got forty more of my version in the freezer. 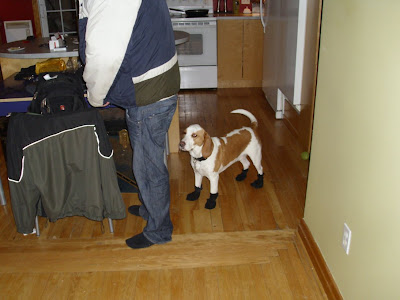 It has been a cold weekend and Georgie has needed his mittens for our walks. It's so funny how people talk to him when they pass by. "What a good little boy in his mittens," people coo, all the while ignoring my presence. I was thinking on a recent walk that happiness is what happens when the things you have to do are the same as those you want to do - like for me, walking the dog. Then I realized that quite often the very fact that I HAVE TO do something makes me not want to do it anymore. I bet the gods just crack up over that little human foible. 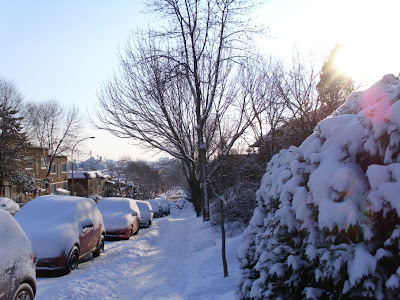 This morning I took out Georgie and discovered that the city workers had again deposited a hill of snow in front of our garage. I definitely think I'm going to buy a couple orange cones. It's not like they can't just push it another 10 feet, because they can. They just don't pay frigging attention. The snow would have been pretty if I hadn't been so steamed up about that. Plus Serge had already shoveled it before bed, so they dumped a pile on a freshly shoveled area! Calm down now and breathe.

I came across my favorite blog post of the month. Thank god for plumbing eh?

Tomorrow, I start three weeks of intensives plus I have 3 evening courses for the other college. What this means is my presence will be spotty on the internet. I'll at least check in on the weekends. Have a great week everyone.
Posted by tornwordo at 11:17 AM

Can't you phone the 'city' re the driveway? I would!
Have a great week with the 'kiddies'! lol

Love the expression on Georgie's face, eying the tacquitos from below!

we apparently know some people... well ones i worked with..small world.... smooches!

You always seem to have the tastiest of photos to share. Not sure how you manage to stay thin.

Haha! Taz gets the same look on his face for the same reason. "Do you wanna..." Is that a male thing?

I doubt Trader Joe could hold a candle to your taquitos.

I still marvel at how well Georgie tolerates the booties. And you got them at the dollar store, too! Double marvel.

What's in the crab dip? Enlarging the pic made me drool but did nothing for giving me a clue otherwise. I do love me some Trader Joe's but at least I realize the consequence of comparing their stuff to something that someone went to a lot of trouble to cook for me. Ahem, Serge :)