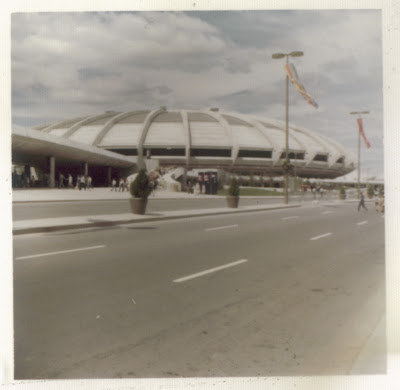 Serge was going through an old box of photos from when he was young and came upon this photo of the Olympic stadium without the tower! For those of you who don't know, the tower is the largest inclined structure of its type in the world. It was supposed to house a fabric roof that could be retracted in the summer. Trouble is, the roof never really worked right. It took a thirty year cigarette tax just to pay for the thing and it loses millions annually. If only they had just stopped it here in the picture. Of course we wouldn't have the iconic symbol either.

It's been quite the month for me. I started an English immersion group with 16 students and we are spending nine weeks together this summer, all day, five days a week. After three weeks, they have made so much progress and are really into the learning process. They have been very supportive too as I filmed the tv show last week.

God what a trip that was!

The first day was blinding anxiety but by the last day, we were a group of five friends having a lovely dinner together. Of course I can't reveal the results or anything but I think we all feel like winners since we each made four new friends who passed through one of the most intense weeks of our lives together. 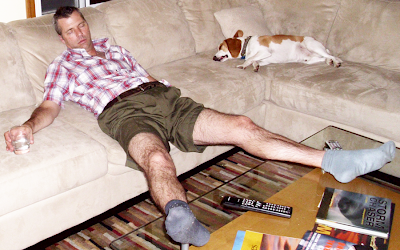 I already put this on FB but after the night I cooked, I was so exhausted that I passed out on the couch. I don't remember being asleep but Serge said I was for a good 20 minutes. Thanks darling for documenting it. Every day of the week we were summoned to a different place in the city to be interviewed and get our reaction to that evening's menu. Then we met at the next participant's house for dinner. When it was my day, the crew arrived at around 1 and from 2-4pm I prepared my dinner. I finished with about 5 minutes to spare but everything went as I had planned. I can't really go into more details, you'll just have to watch the show when it's aired in October. It's available on the internet once it airs.

I don't think I slept for more than 5 hours any night and I was also WORKING.....unlike the other participants. It's amazing how much you can do when adrenaline is coursing through your veins. I'm looking forward to a more tranquil July.

Also, we have been dealing with the apartments turning over. First we had the three bedbug infested apartments to treat. It seems Guy likes to drag things he finds in the alley into his apartment. Then the girl who painted her kitchen ass brown without masking or anything creating the ugliest room ever ( but it was yellow, she opined when we asked her about it) has cost us hundreds of dollars. Then it was the two furnished bachelor apartments that had far fewer furnishings than when the tenants arrived. No towels, no spatulas, can openers, and one of them had no knives left. Really? We can't ask for a deposit so it's just the price of doing business I guess. But it always makes me think that bad thought: people are pieces of shit. Again, I'm looking forward to a more tranquil July. 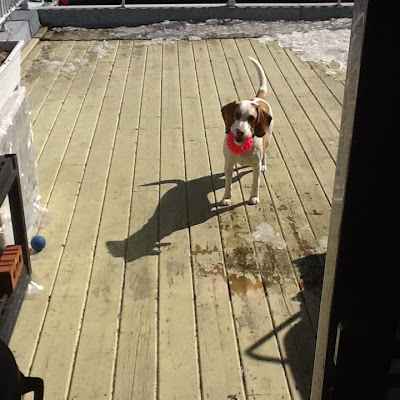 How about a pooch pic for smiles? Have a lovely month peeps.
Posted by tornwordo at 2:52 PM

Sounds like an interesting month and always nice to see Georgie.

snow and ice on the porch. It MUST be July in Montreal! :)

It's nice you made friends with the people on the show. I hope you won!

So Serge took a picture of his two favorite guys sacked out on the sofa. So what? It's not like you haven't done the same to him. . .;-)!

Besides, he didn't put a funny hat on you or anything like that.

Can't wait to see the cooking show. Remember to give us the web address.

I don't understand why you can't ask for a deposit on a furnished apartment. I would certainly expect it. But maybe that's how they do it in Montreal.

LOVE the pics with Georgie! And you. :) Thanks for keeping us in the loop. I'm really looking forward to seeing your show in the fall.

Can't wait to see the show! I bet it's great!

Bedbugs? I'd have burned the building down, that's how much they freak me out! LOL!

And you are right, some people are just pieces of shit.

How does one get yellow from ass brown?

Georgie is so freakin cute

A pooch pic is always enjoyed!

Found this pic of Georgie and you on Men and their Dogs tumblr. Only Georgie is given billing.
http://menandtheirdogs.tumblr.com/page/23#28195857909