Hey everyone, sorry I have been absent the last few months. I have been crazy busy with work (got a new higher-paying gig, yippy) and somehow we were able to cram in a 16 day vacation to South America for Serge's 50th birthday. Once again, it turned out to be the vacation of a lifetime. Let's get started, shall we? 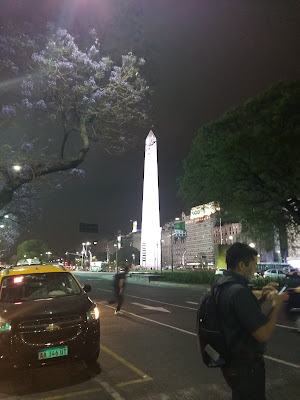 South America is far! It took us two 7 hour flights connecting through Panama to get to Buenos Aires. (Btw, Panama City is HUGE, it looked like we were flying into Manhattan.) We arrived at 2am to deserted streets, a sight we would not see again. 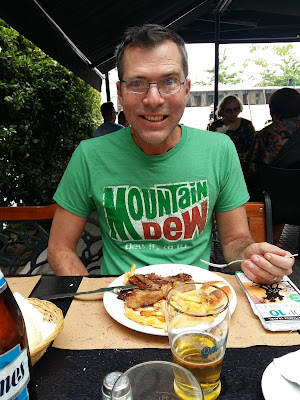 We had one full day to explore before we boarded the ship. We had heard that the food was good and cheap and that was true. We had a three course lunch (steak) with beer for about $15. 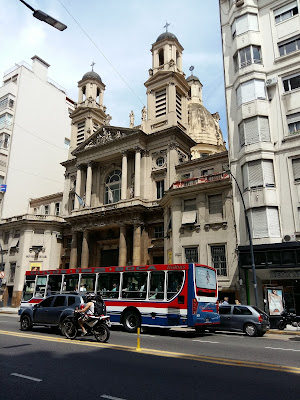 The city has a very European feel to it, which is why it is called the Paris of South America. We spent the day walking the city and hitting the major walking streets and the Recolletta, a famous cemetery where Evita Peron's tomb is. 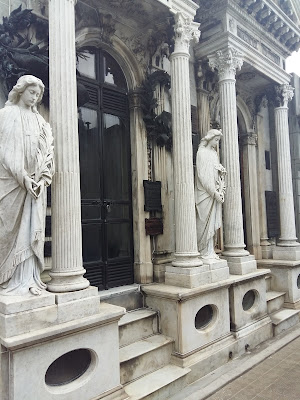 The cemetery is full of elaborate tombs with coffins in them. Some were like mini palaces as if the dead were continuing to boast of their long ago wealth. All in all rather creepy and for me anyway, highlighting the vanity of humans. 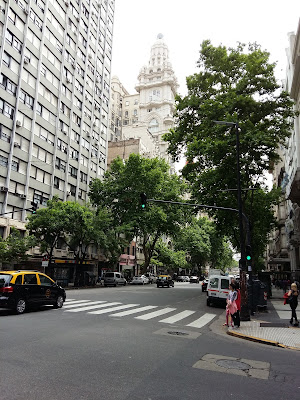 We walked and walked and walked. We had a nice dinner for super cheap and a $3 bottle of wine. The best bargain in both Argentina and Chile was wine. I was glad I had bought Argentinian pesos before I left as none of my cards would let me get money out of the ATMs. 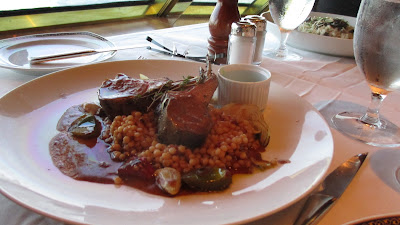 The next day we boarded the ship. Even though the ship was staying the night in Argentina, we ended up staying aboard since everything was free and they had a Tango show in the theater. Another strange thing was the Spanish they spoke. I understood virtually nothing. Once aboard, we knew we would eat like kings and Serge had the lamb chops. 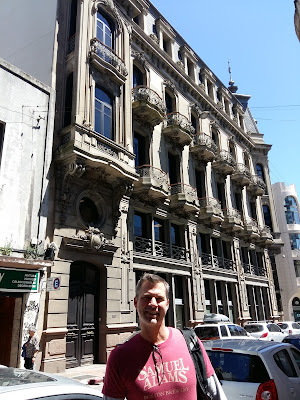 The next day we arrived in Montevideo. It was pretty quiet when we were there, but it too had a very European vibe. We sat in the main square and people watched for a while and then got back on the ship. None of the excursions here interested us, so we didn't spend much time ashore.


The next couple days were at sea. The captain had to skirt around a big storm but we still got hammered with 30 foot swells. What the video shows is mild. Eventually they drained the pool because all the water kept sloshing out. And I got seasick. It has been a long time since that has happened to me. Luckily, one of the guys we met had extra seasick patches, but I still had to upchuck everything I had eaten and wait for it to take effect. 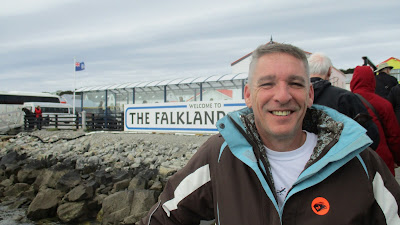 Then we arrived at the Falkland Islands. Wow, a barren treeless landscape way down south in the Atlantic Ocean. It boasts a village of 2000 inhabitants, all of them speaking with a British accent. This was THE place to do a penguin watching excursion. 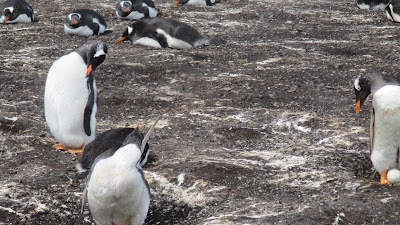 We took the Bluff Cove tour (I highly recommend) to see a colony of Gentoo penguins and King penguins. These are the rare Gentoos. We were asked not to touch the penguins because if they leave their nest, the seagulls circling overhead would have lunch. They are not afraid of people though and will walk right up to you and peck curiously at your clothes. 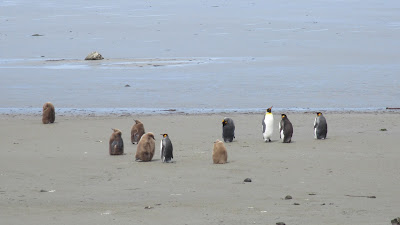 These are the king penguins, the second largest of the species after the Emperor penguins. The babies have brown plumage and the adults feed the young ones until they get their adult plumage about 18 months old. 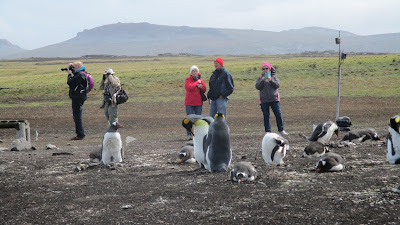 Here are Gentoos and King penguins hanging together. As you can see, the landscape is pretty barren. There are no indigenous mammals on the islands although there is plenty of sheep farming. 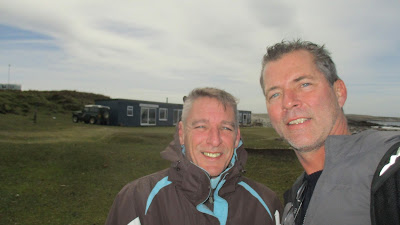 After watching the penguins for a bit in the howling wind, we were treated to tea and scones with clotted cream and read a bit about the history of the islands. Darwin has a well documented visit to the islands where never before seen species were discovered. 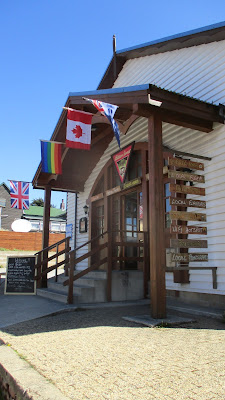 After the tour, we walked around the town, got some postcards to mail (Sorry Pat, didn't have your address with me) and had a pint with some fish and chips. Souvenir? Why yes we got king penguin salt and pepper shakers. 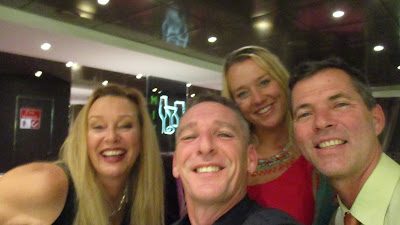 The best thing about this trip was all the wonderful new friends we made. These are just a couple of them who had been on the boat for over a month. 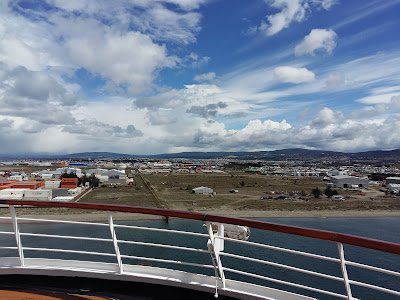 The next port of call was Punta Arenas, way down at the bottom of Chile. It was brisk but a lovely day. We headed into town on the shuttle and walked around. 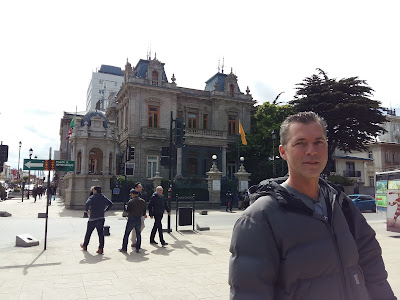 Still European feeling. I found an alpaca scarf for $6 and we found a cute little cafe where we had a Chilean version of a grilled cheese sandwich and coffee and used the free internet to post on Facebook. This is the first cruise that we did not use the wifi on board. It was liberating. I highly recommend if you ever have the chance to cut off from the connectivity - DO IT. It's hard the first day but then totally relaxing. 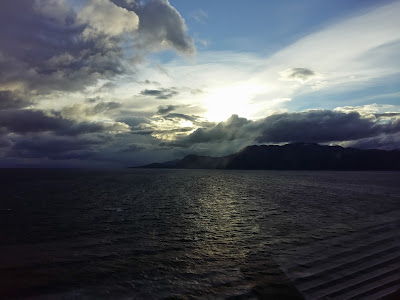 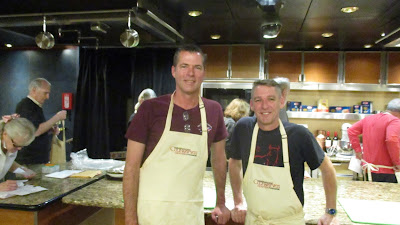 We took a couple cooking classes on board. That was fun learning to make yummy new things, getting to keep the apron and then having a boozy lunch with the prepared recipes. We made Chilean ceviche, poblano chile and cheese stuffed chicken breast and chocolate flan the first class. 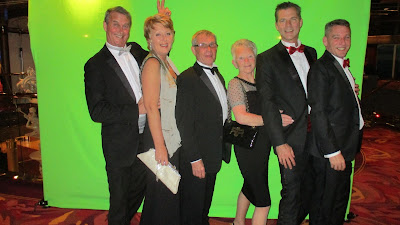 We brought the tuxedos we bought last year with us for the formal nights. This gang we met at the smoker's table where Serge basically lived while on board. They were from Manchester and I have to admit, I had trouble sometimes understanding their English. 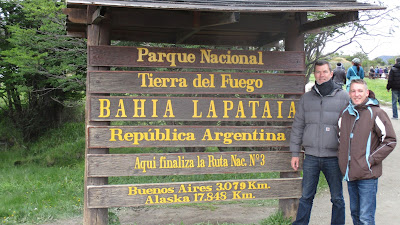 Finally, we reached Ushuaia, Argentina and the Tierra Del Fuego National Park. This is the southernmost road in the world. Had to take the excursion to say we did it but it was pretty much a tourist trap. The t-shirts in the gift shop were $40 and up. No thank you, the photo will do. 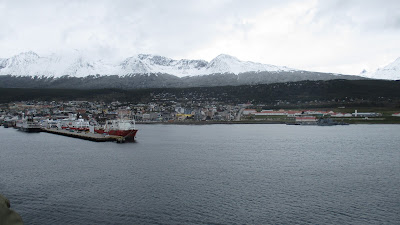 Then we departed for 4 days at sea where we experienced every kind of weather including snow on deck. The next morning the captain woke us to have a look at Cape Horn. The legend is true, 73 mile an hour winds and 30 foot waves which were 60 feet if we had gone past the Cape. So about 7 miles from there as the boat was listing 7 degrees in the wind and rain, the captain turned around and we started the long journey up the rugged coast of Chile. 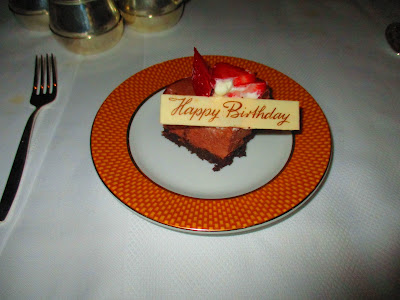 We ate at the fancy restaurant on board for Serge's 50th birthday. We ate like kings the whole time and it seemed like they had brought the food up a notch from our Alaska cruise last year on the same exact boat. 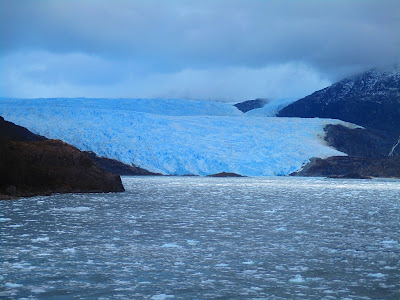 As we traveled up the coast we saw many glaciers and the captain pulled closer to see this monster of a glacier whose name I forget. We saw lots of waterfalls, penguin colonies and other wildlife but no people whatsoever. This whole part of Chile is virtually uninhabited. 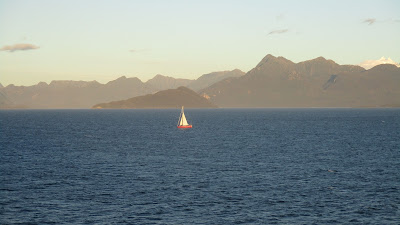 On the third day at sea, I finally saw a boat. You can see the snowy Andes soaring into the sky in the background. Soon we would arrive at our next port where we planned an excursion to go white water rafting. 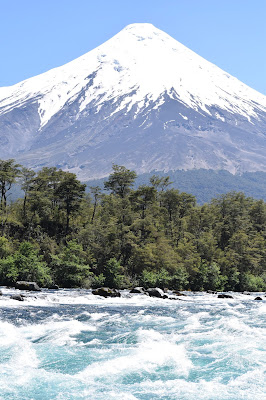 We arrived in Puerto Montt, Chile and took a lovely hour long drive to get to the rafting spot. It was unbelievable beauty everywhere like we were in National Geographic magazine. 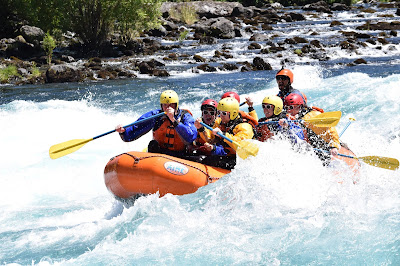 Boy that water was cold! We had never done this before and it did not disappoint. I have to admit, I was scared the whole time about falling in which luckily didn't happen. The raft went fully underwater several times though so we were lucky nobody fell out. 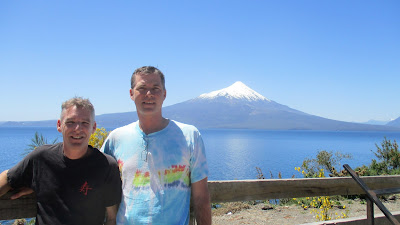 On the way back to the ship, we got to stop and take pictures of the volcano Orsono whose last eruption occurred in 1853, There were two other volcanoes in the area, one of which erupted last year. The ground was still littered with several inches of gravel belched out of that one. 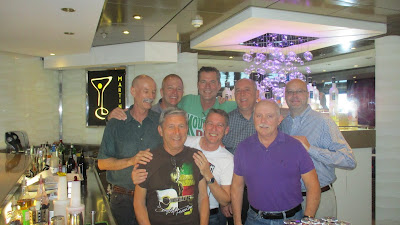 We had one last sea day to say our goodbyes to all the fun new friends we made. This was the first cruise where so many people attended the LGBT get together in the bar each evening. The first night there were over 20 of us. So we had happy hour every evening together and many of us played board games and cards during the day. I love gaming as some of you know. 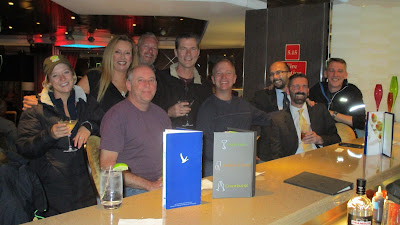 More goodbyes but we talked about doing a reunion cruise in the future. Then we arrived in Valparaiso, Chile and got off the boat and onto a bus to go the airport in Santiago. I regret not having a couple more days to explore the area but as a teacher, 16 days off in November was already pushing it. Just something to come back and do another time.

I could talk about so much more, Trump, Christmas, our airbnb sagas, the dog watching sagas and much more, but I think I will just leave this post as the travelogue for Serge's 50th. Thanks for stopping by, mwah!
Posted by tornwordo at 3:47 PM

Once again I have really enjoyed your post. This makes me want to go on a trip. This is a great one.

I never thought I would like a cruise until I read your post. :) The cooking classes especially appeal to me.

Sounds like a great time and a great birthday adventure!

what a journey you had; thank you for sharing your pix as I most likely will never get to that part of the world.

Really fun to read your adventures, glad you guys are still making time for fun! :)

I saved this post to read later -- and finally did. What an adventure! Fantastic.

These photos are absolutely beautiful! Thanks for sharing with us.