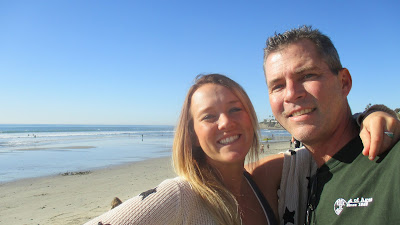 The day after my last blog, I went to California for my annual holiday visit. It was cheaper to fly into San Diego so that is where I went. I got to meet up with Beth in Pacific Beach (cute neighborhood!) for food and drinks and a walk on the beach. It was a spectacular day in the 70's. This would not be repeated until my last day. 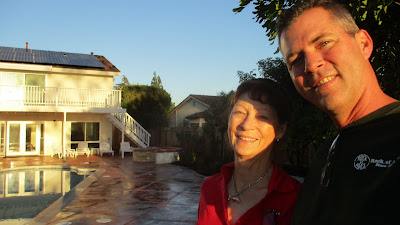 Then I headed to camp Mama where they have a whole new backyard. I spent a week there hanging out, playing Candy Crush and binge watching Travelers on Netflix. Plus I turned her onto Martha and Snoop's potluck party which she loved. 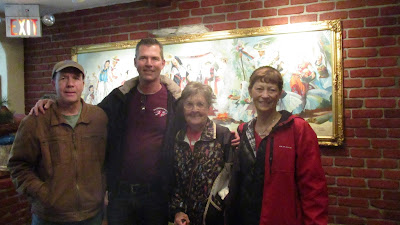 We got to meet up with my grandma for lunch one day. It was cool because even though she has memory issues, she recognized mom right away. Can't remember the last time I hung out with both my mother and father. Pleasant. 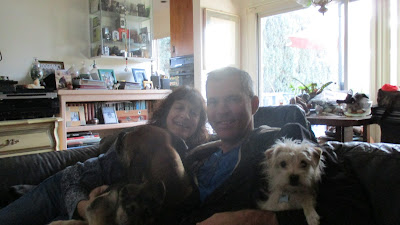 It was nice ringing in the new year with Donna and Nathan and their pups Apollo and Stella. Their neighbor used to work int he pinball business and he had saved up every Canadian quarter that he came across for 20 years. He offered me nearly fifty bucks in quarters for $20 US dollars. You know I jumped on that! 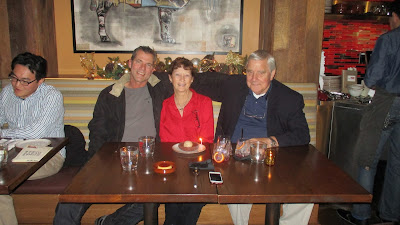 Mom turned 70 so we tried a chic Spanish tapas restaurant and decided once was enough. Not that it was bad or anything, just not extraordinary. Plus it wasn't cheap. It was nice to have foie gras since the ban on it was lifted in California. 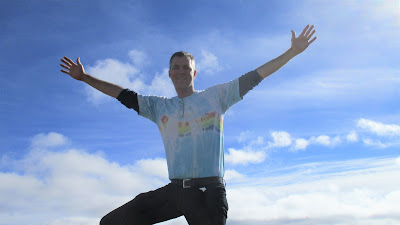 Then I headed to Dad's place for the next week. He had scoped out a hike off of Ortega Hwy to San Mateo Peak, the next highest peak after Santiago and Modjeska in the Santa Ana mountains. The summit is 3994 ft, so with my height, my head was at 4000. 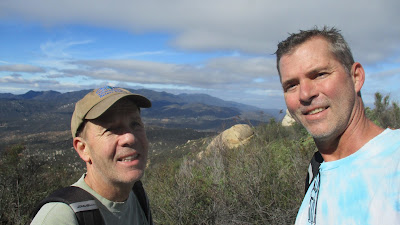 It took almost 4 hours to do the 5 miles. Of course we had lunch sitting on the summit gazing from Catalina Island to the Santa Rosa mountains in the distance. 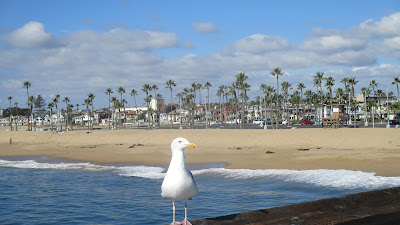 We took grandma out to lunch again at the beach at Ruby's at the end of the pier. Another thing I did with Dad was go see La La Land. Wow, I have not been enchanted like that in a long time from a film. I grinned helplessly throughout, except when I cried at that one part. As an LA boy, I appreciated all the location shots. When I got home I took Serge to see it for a second time. I still loved it so of course I own the soundtrack. 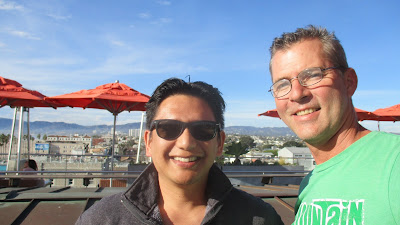 So quickly the last day came. It turned out to be spectacular weather-wise like the first day. My friend David met up with me and we had brunch, walked on the beach and had a drink on the roof of a beach hotel in Venice. What a sweetheart. I got a room near the airport and it had a Denny's attached to it. That is where I discovered everything hashbrowns. YUM! I had it for dinner and breakfast the next day lol. 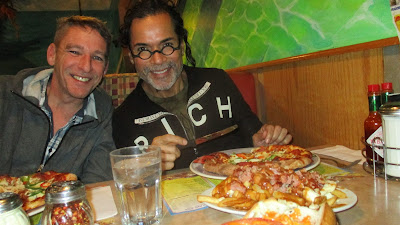 Ok Imma skip a month now. Not that nothing happened in January. We had fun at Helene's birthday party, at Rita's for dinner, walks around town and lots of trips to the video store as we devour series after series hibernating til spring. Jon arrived the last day of January, a day before all the others would arrive for our big trip to Cuba. I turned Jon onto smoked meat and poutine. He ate that whole poutine and half that pizza and he's skinny as a rail. 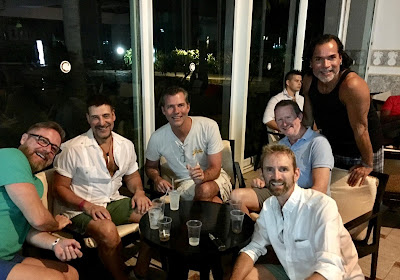 We had a big sleep over with all the peeps who came in a day early. Then we headed to Cuba, my third straight year to the same resort. A lot of the staff remembered me and even asked about Serge. Here we are in the evening hanging out in the lobby bar. We totally lucked out and it was in the 80's every day and no rain. 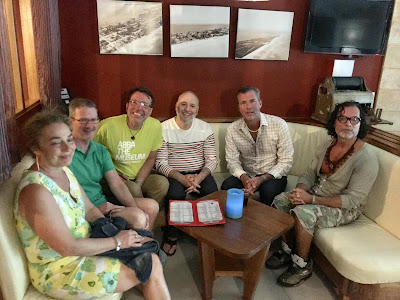 I let everyone experience the resort for a couple days and then knew that suggesting going out to dinner would be a definite yes. It's like the buffet was better than I had prepared them for but still rather repetetive. So we went to Varadero 60 which is #2 for restaurants in the city. (I just learned that and now wish to return to try #1) Everyone loved the food, so much so that some went back another evening to eat there again. 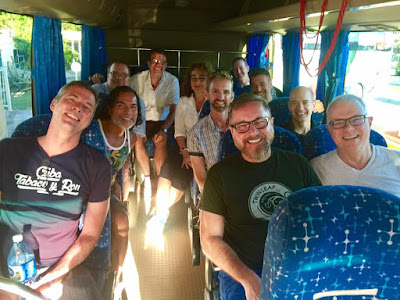 Since we were 13 people (the other 11 who came with us did their own in French) we got to have Havana a la carte. A bus, driver and guide for the whole day for $35 a person and we could choose what we wanted to see. Of course we wanted to see everything that is done in the regular tour. The bus ride is a little over 2 hours to Havana from Varadero. The guide was very knowledgeable and talked about everything we were passing sprinkled in with history lessons. 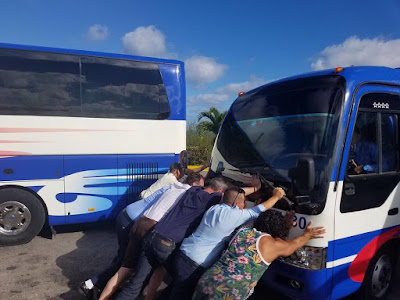 Our first stop about half way to Havana at a scenic overlook, I had a beer and looked at trinkets. When we got back in the bus, it wouldn't start. So we pushed the bus uphill (!) so that it could use gravity going down the hill to pop the clutch. Yes, the buses have manual transmissions, but thank glob, because we were swiftly on our way. The driver never turned off the motor the rest of the day. 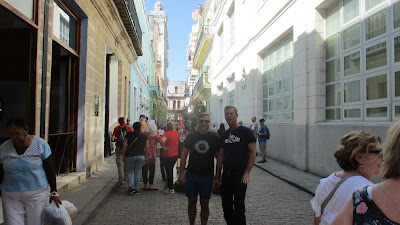 We walked all around old Havana which has no vehicular traffic most of the time. I was surprised to see a couple of high end shops. The architecture is pleasing. I spent most of the time counting everyone even though the guide was doing it too. Still we lost one of our pack members right before lunch. The guide went back and found him, very stressed out about it. 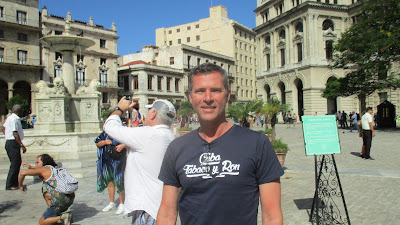 We all snapped a ton of photos. There were street performers and other more pushy kinds of busking going on. Never felt unsafe at all. We ended up eating on the rooftop of the hotel where Ernest Hemingway lived for a while. I burped up that pork sandwich I ate there for like 12 days after. Not exaggerating. 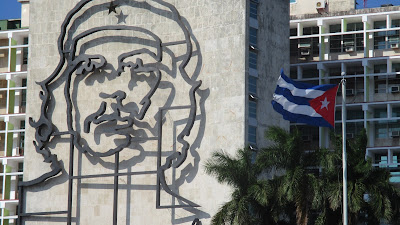 We also went to Revolution Square which has a big monolithic monument and very big likenesses of Che and Fidel and lots of flags. After that we went to a Cuban crafts market which was cool except for the constant pleading to look at everyone's things. The day passed quickly. On the bus home, my American visitors asked lots of questions and the guide was very open and frank. My favorite moment was when someone asked, "Well can't you go into the street and protest to have some change?" Of course not, we would be jailed. It was interesting watching them wrap their brain around the fact that the government owns everything and although appearing free, their freedoms are quite restricted compared to ours. 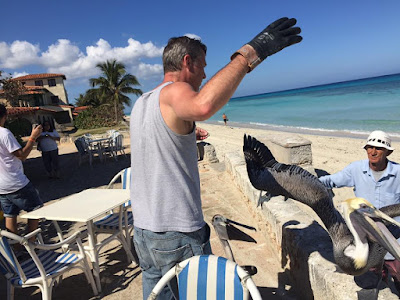 I went on a Varadero city tour with John (as opposed to Jon) and got to feed the pelicans! He gave me a thick glove but their clacking beaks freaked me out as they clambered over each other to have the piece of fish in my hand. Really neat seeing them up close though. 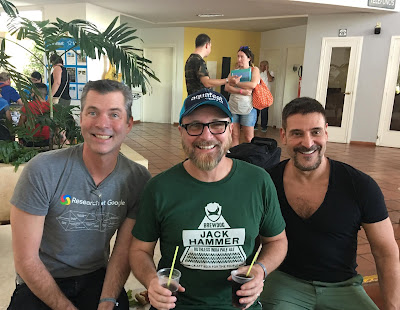 The week flew by. The last day we waited in the lobby for the bus plying ourselves with drinks. I wonder how many I had had at this point in the picture. I don't even know which day this was. Ah open bar. 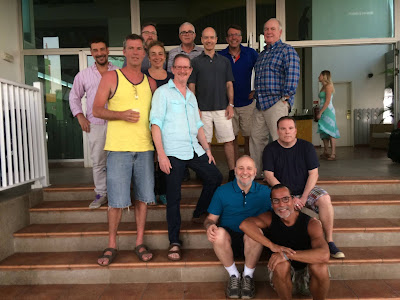 We finally got a group shot of the whole English speaking side of our gang. We were 13 and there were 11 Quebcois who came as well. It turned out to be a really fun vacation, I cried laughing several times and we all got along swimmingly. They named me "Richard no filter" after hearing some of my stories. On top of all that, I made a bunch of money doing it. Very cool, and will try to organize more group vacations.

Thanks for stopping by everyone :)

Thank you. I love your trip blogs. HugZ!

In the next to last pic, the guy on the right (black ultra-deep V tee): tell me all about him, and leave NOTHING out! He's HAWT!

I see so many HAWT MENZ in these pix! so little time for a taste...

I really enjoyed both of your vacations. The Cuban trip sounded like a lot of fun.