Happy holidays y'all! It's a rare year I don't send holiday cards out, but this is one of them. How did I ever have time before? I'll do better next year, but what better reason than to pen a holiday letter? Some people love those letters and others don't. I love them but have never written one myself. And the beauty of the blog is that I can add as many pictures as I want.  So grab a cup of coffee and join me as I review the adventures of Serge, Georgie and me in 2022. 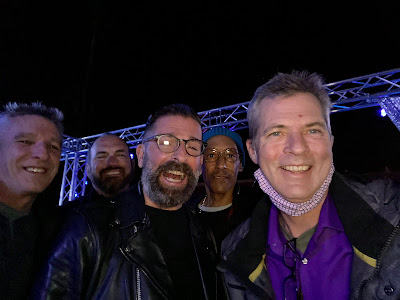 The New Year found us in Palm Springs where we rang it in downtown with friends. It was great meeting up with Olly, whom we had met in 2016 on Serge's 50th birthday cruise. (Later in the summer another friend made from that cruise visited us.) Do you see the red dot on my forehead? This was because my dad and Serge convinced me to let them try to freeze/burn off a perpetually irritated spot on my forehead with wart remover. Although instructed to apply the canister twice, they stopped after once because it was clearly frozen. Hence the healing wound in the photo. The good news is that it worked! (Your mileage may vary.) 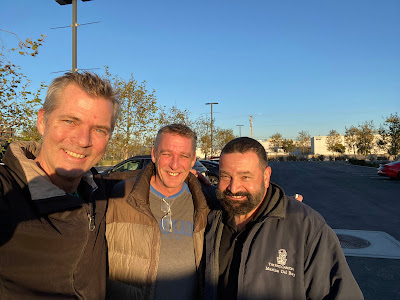 Before we left California, we met up with my long-lost friend Jonathan whom I worked with in my last lifetime at the Ritz Carlton in Marina Del Rey. (I quit in 1994) We tripped down memory lane and caught up on over a decade of news. (He had gotten married and adopted a horde of dogs, notably.)  I've now lived in Quebec for over 22 years but my oldest friends remain in California. 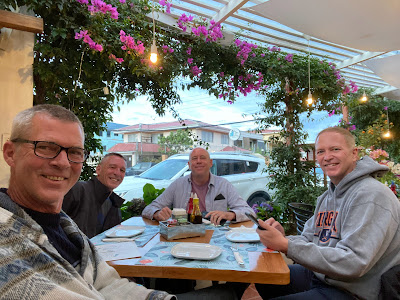 We came home for 4 days before heading out to Cuenca, Ecuador to visit with our friends there (pictured) and escape a month of winter. We also socked a bunch of money down there since they give 8% interest on your deposit certificates. Given the stock market's behavior this year, I wish we had socked a bunch more. It was a delightful visit with warm days and not too much rain. We enjoyed playing games at Roscoe's house (not pictured) and watching sportsball (it's much more fun with an enthusiast in the room). I ended up working remotely more than I liked, so this year I won't make that mistake again. A previous blog post details more on our trip to Cuenca. 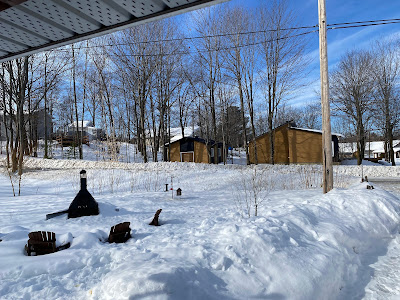 When we came back, it was depressing. Our first winter here has taught us that we live in a much snowier place than Montreal. With little to do at home, Serge went out and got a job at the local Rona hardware store. He works there three days a week and seems to like it. Nobody speaks English very well there so they all call him when there's an English-speaking customer. He's always been handy so he is good at helping people get what they need (and telling them what they don't need) for their projects. 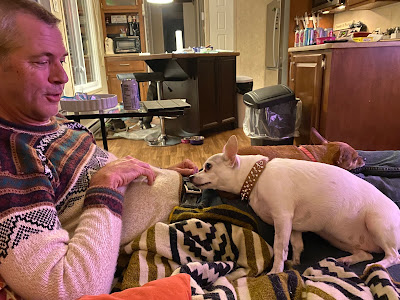 As Covid restrictions began lifting, so did people's wanderlust. We ended up dog-sitting several times for customers I had from Montreal. They drove all the way out here (an hour minimum) to drop off and pick up their dogs. Flattering in a way. These two chihuahuas, while adorable, are not house-trained, so although you don't see it in the picture, every square inch of carpet is covered with pee-pee pads. They are so untrained that they just walk through the house, seemingly unaware that excrement is coming out of them, like horses. 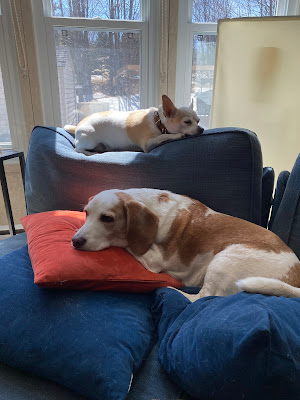 Georgie! He is definitely an old dog now, with growths sprouting everywhere and occasional infections. I have a monthly visit now with the vet as we work our way toward the inevitable. As of this writing, he is still thrilled like it's Christmas every time we feed him and he enjoys his twice daily walks. So we are savoring these good times. Our little guy is 15 now. 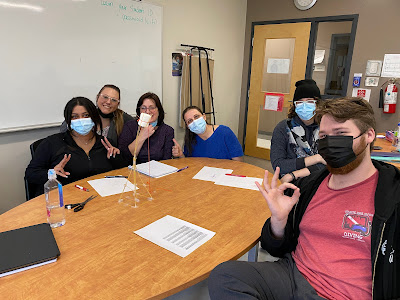 In the spring, I got an in person teaching contract and since we live in the last jurisdiction in North America to get rid of the mask mandate, we had to do the whole thing masked. Here you see half the class and their winning marshmallow spaghetti challenge tower. I didn't know it but I wouldn't be in a classroom for the rest of the year. All my work has been on Zoom or Teams since. 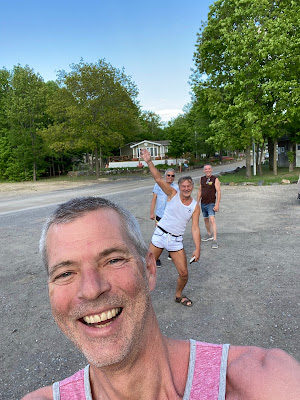 The love affair continues with the boys next door (pictured) and another couple who are on our bowling team (who you'll see later). Throughout the year we took turns cooking dinner for a night of cards or dice and lots of laughter. There are many wonderful things about living here, but the best has been making so many new friends. 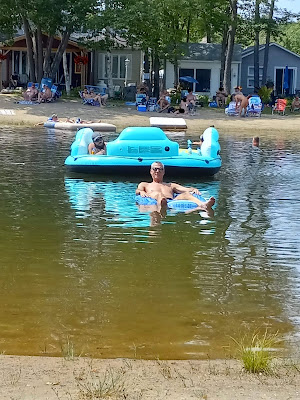 Finally summer arrived and we spent many days like this, finding or making a shady spot on the beach and sipping soda (ok beer) and when it was really warm, floating in the lake. Well, it was how we passed the non-rainy days of summer anyway, of which there were many. The restaurant and bar and discoteque were open all summer as well as events such as weekly bingo, karaoke and drag shows. I went to the things that happened early like bingo and went to a few of the dance themed nights. Serge went to ALL of them. Atta boy. 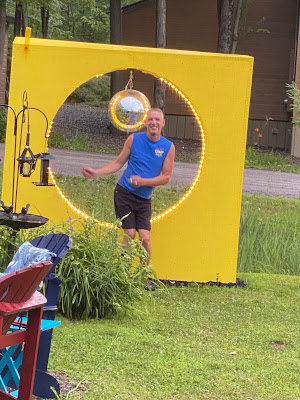 I told Serge to make some art in the yard so he constructed this. It is really cool at night and we've had nothing but compliments from the neighborhood. My project has been to finish my thesis so I can finally get my master's degree. As of press time, I have nearly completed my experiment and now need to analyse the results to see if I can make any sorts of conclusions out of it and write another forty pages on that. It'll be done at some point in 2023. 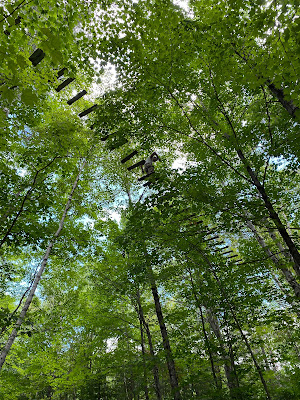 For my birthday I requested to go to Abraska, a sort of adventure course with varying degrees of difficulty and death defyingness. There I am way high in the trees on that flimsy rope bridge. Serge wouldn't do any of that, he and Pierre stuck mostly to the fun zip lines they had there. There was one moment when I realized I had neither attachment attached, which besides being incredibly careless, is grounds for expulsion from the park. I survived thankfully. 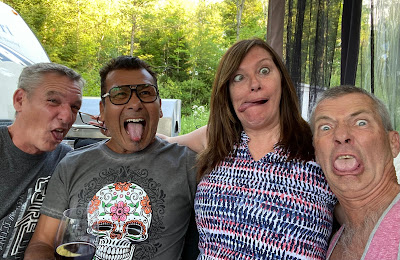 Also in July we were able to visit with our friends Annick and Jesus an hour on the other side of Montreal. They had bought a camper and spent the summer in a place like ours, a campground with mostly fifth wheels and trailers in the summer. There were many rules at their place, and we almost got kicked out for accidentally going 12 kph when the speed limit is 10. It was fun however, as you can see. 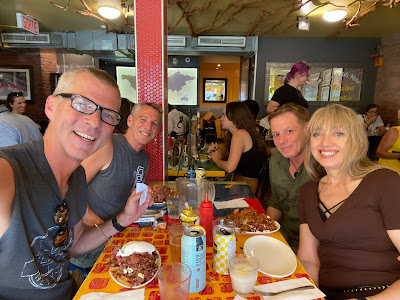 Cousin Cindi came to visit too with her new fiance. We met up in the city and went to La Banquise, practically a requirement when visiting Montreal. I had the Panoramix Poutine with smoked meat, mushrooms and sour cream. Later I wished I hadn't eaten all of it, but dang it was good. 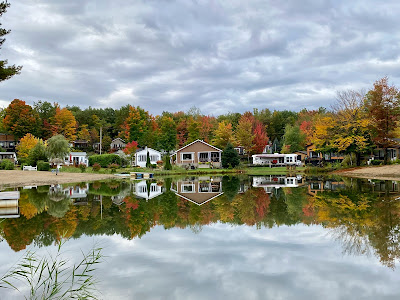 At the end of summer, like most years, we spent a week at campcamp in the woods in Maine (not pictured). I only took 4 pictures at camp this year, but I think we had our best year yet. (I think we say that every year. On the way there, we talk about how we are going to skip next year and then on the drive home we make plans for what we want to do when we go back the next year.) This is autumn beginning to descend on the lake and empty beach. We ended up having a spectacular season with vibrant colors for a good two weeks. 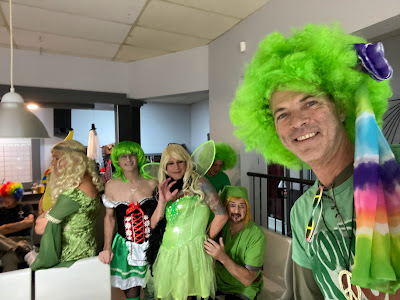 As the "greens" bowling team (all the teams are colors) we dressed up for halloween. The two on the right are the ones who round out our gang of six who play cards and dice. Another fun night plus we won our games that night. 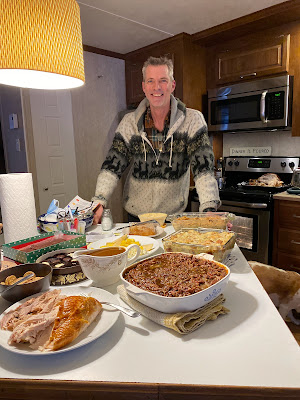 James came up from Massechusetts for Thanksgiving and brought his new friend, Don with him (I can't believe we didn't take a picture together during their 4 day visit). Serge had gone to Key West with his friend for a twice postponed vacation so we enjoyed the feast without him. We also binge watched Wednesday and did a spa day. It was my second Thanksgiving dinner that I made, the first being in October for Canadian Thanksgiving when I treated the boys next door to the same feast. The only difference was I bought pumpkin pie (the very last one in town) for Canadian Thanksgiving and James made a to-die-for pumpkin cheesecake for the pictured feast. 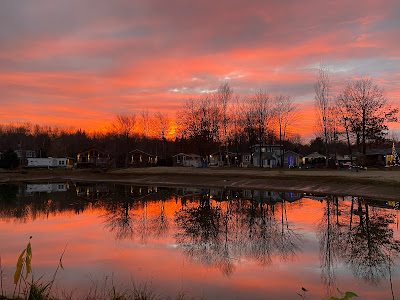 And here we are at the end of the year with so many things to be grateful for. The late autumn sunsets are lovely here in Sainte-Julienne, Quebec. We had many visits with other friends this year, but either I don't have a picture of it, or I'm in it and I look horrid. We are looking forward to a busy 2023 with our 30th anniversary cruise from Aukland to Vancouver, finishing up my thesis and generally enjoying life. Here's hoping your year has been as wonderful as ours filled with friends, family and good times. Happy holidays everyone!

Damn. I swear you two have more fun than anyone I know. If I was gay do you think I would have more fun? Sigh****. Merry Christmas y’all

While I was in Key West a guy approached me at the bar screaming "You are Serge!, You have a beagle!, you are the husband of Richard the Blogger!" I said yes of course and went on with a short conversation that I have no record after my 3rd free all you can drink happy hour consummation. Please identify yourself so Richard might have meet you before.

We will miss your card, but a wonderful letter. Good luck with you thesis!

Serge and Tornwordo (Richard)!
I apparently am the over-enthusiastic gay who came up to Serge in Key West to gush about meeting a longtime blog subject in person! Serge was gracious to listen to me spout off all the things I knew about y'all...and my hubby thought I was a bit too much. But when is it that you can just bump in to someone that you have read about for YEARS?!! I never did meet you Richard, although I had texted you when me and my husband visited Montreal many years ago, and we had planned to meet up at a bar...but that never materialized for whatever the reason. I again saw Serge later that night at a bar where he lost in "most gay" contest...and I came in second in "best balls" lol. What fun...Key West was so very slow that Thanksgiving weekend, but relaxing. All the best, and thanks for continuing your blog for so many years....back when our blogging connected us, i was the guy who wrote Protected Truth blog, now shuttered. hugs kev