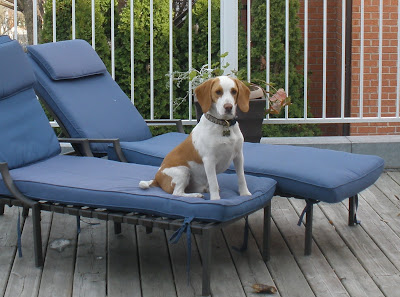 That's his favorite spot now. He can spend hours out there with his nostrils fluttering as he reads the smells on the wind. I wonder what it's like to "see" the world through odor as he does. Despite his drop dead cute factor, his farts are still the most violent slap-in-your-face assaults you can imagine. It causes us to shriek, "Georgie, NOooooooo!" every time. I thought maybe they'd mellow, but they're still as heinous as ever. Good thing he's adorable, eh?

Speaking of heinousness, I went to the dentist to have five silver fillings gouged out and replaced with the newfangled composite stuff. Obviously I was not looking forward to the experience. When I first got there, they had to numb half my face. The nice cute dentist said, "I'm sorry about this but if we want to stay friends..." Then they put a "dam" in my mouth which is hard to explain but basically kept my mouth stretched open for the next two hours. The assistant put her ipod on the docking station and had a mix straight out of Alley McBeal going on as they went to work gouging out the old silver fillings. The dentist sang while he worked and it was like I was in an episode of Nip Tuck. The drilling and grinding went on and on and on. At the end, I was dubbed a "good patient" I guess since there was no whining on my part. The result is satisfying, no more silver on the bottom teeth and the little sensitive spot no longer is. Unfortunately, this little two hour episode set me back almost $800. That's a week in Cuba folks for two hours in the dentist's chair. I really am in the wrong business.

Right after that, I had to go teach a class. The (I want to say novacaine, but surely it's something different now) anasthetic hadn't worn off though so I couldn't speak properly and I couldn't even feel when drool came out of my mouth since the whole bottom of my face was numb. The students had a good laugh anyway.

Do any of y'all use bloglines as your blog reader? I do, but they were down for two days this week. I felt cut off from my peeps. They are back up now, so I'll try to catch up this weekend. Today we're having a reunion with all the Cuba friends we made back in December. That should be fun. I don't know about the rest of the weekend, but I suspect a good amount of sloth shall be had. I hope you enjoy your weekend too!
Posted by tornwordo at 7:17 AM

Fortunately for both my purse and my mental health not only do we have the NHS in the UK but my dentist has a policy of "if it aint broke dont fix it" regarding amalgam/old fillings, he xrays them every couple of years and replaced one that had a problem, but otherwise they can keep on going.

Are you going to have to get Georgie his own lounger or share with him? You'd think he would be offended by his own farts!!!!!

Amazing how we dog owners put up with all the fart smell! We thought by changing Sophie's diet she would fart less.....didn't work. As you said thank god they are cute!
Our last dog used to leave the room when she let one.....a lot of good they did for us.

Don't you love dentists! One of my worst fears.

I use bloglines sometimes....didn't notice they were down this week.

Mark My Words said...
This comment has been removed by the author.
10:12 AM

Lots of slothing to be done here too. Our Hugo farts a lot too, Sheila says she can tell the difference between his farts and mine - his are more organic. LOL. I did get him some more digestible food, low shit food as I call it, it helps with the poo volume, makes it easier to clean up.

I use Google Reader. It seems pretty reliable.

I had a severe panic attack once at the dentist and now when I go, I have to have IV sedation. It's been ages since I've gone and should go but damn, the dam freaks me right out.

I'm the one with the heinous heinie around here lately! Wooh, I'm rotten!

I use Google Reader.

$800 is nothing. I went to a private dentist in the UK recently and that cost me 1300 pounds.
That dam thing is tricky to get in place, but once it's there, I really like it. No risk of anything falling into my lungs.

I have some serious suffocation/claustrophobia issues, so the dams freak me right the hell out. So does water filling up the back of my throat, though. If I'm going to have anything extensive done anymore, Ativan is my friend.

For as farty a little dog as Tuck is, they're pretty low odor, and for that I am very thankful.

Anything that improves one's smile is ALWAYS money well spent :)

Have a great weekend!

Your puppy is SO cute!! Forgive the farts and get air freshener. That dog looks very very cute. Did I say your dog looks so cute? I'm in love!! Have a good weekend Sticky!!

Your dentist is cute! I think I would be drooling even without the anesthetic.

If your dentist is re-filling your teeth with the composite that my dentist has been using on me, I think you will appreciate it. Just one side benefit is that I no longer have days of ache while my teeth and nerves adjust to the metallic amalgam that dentist used on me for years. It was as if they drove a metal spike to my most sensitive nerve and then juiced it with hot, cold, and electricity just to get their sadistic thrills.

The only time my dog toots is when she gets food that has a corn product in it. Oh, and after she eats old dog turds too. Now THAT'S heinous.

Teeth are our money pit. Luckily, I don't mind trips to the dentist. I'd rather have a root canal than visit the gynecologist.

If Georgie was a person, I couldn't live with the stench, no matter how cute he/she was.