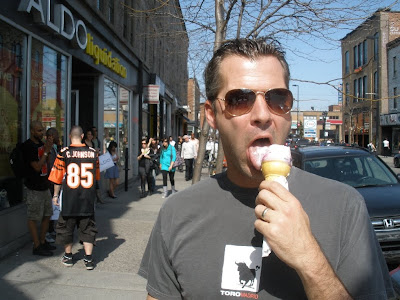 It has been the two most fabulous days weather-wise in a very long time up here. At least since last September. Naturally, everyone in the city fled their cooped up homes to enjoy it. We not only broke records, we shattered them by 10 degrees C (18 F). There were lines for ice cream in April. That's something I'll probably never see again. I wanted Gelato and since they didn't have the cherry vanilla kind I like, I had blueberry cheesecake. Ooh ooh ooh, another fabulous thing was that we wandered into a specialty market and I found those French's fried onions that I use for green bean casserole. Picked up a half dozen cans I did. 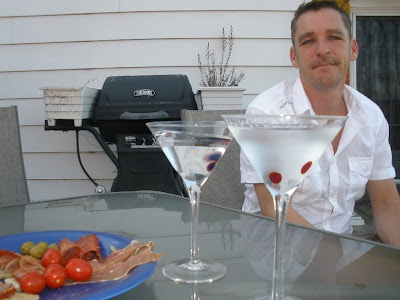 Serge set up the patio while I made a plate of tapas and martinis. We enjoyed sitting outside and marveled. Honestly the day before was in the 40s and it was 80 degrees! 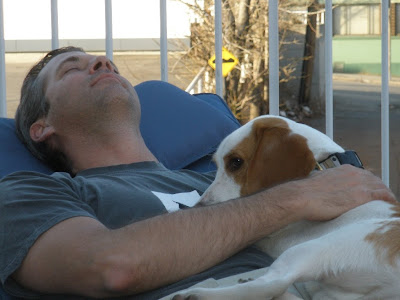 It doesn't matter where I am, that dang dog needs to be (dominate?) on me. 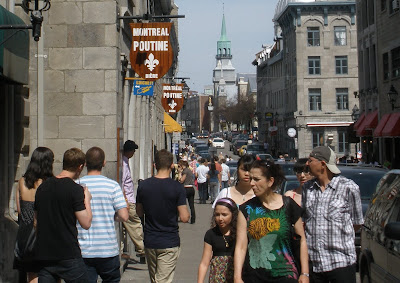 Day two of the "heat wave" and I dragged Serge down to the old port. (We had walked Mont Royal street the day before.) Like the day before Serge wanted to have a "beer on a terrace". We got lucky on Mont Royal street and found a spot. When someone got up, I started counting one-one-thousand, two-one-thousand. I got to four when the seat was grabbed. Four seconds. I didn't think we would be so lucky down in the old port since it seemed like everyone had the same idea as we did for a walking venue. 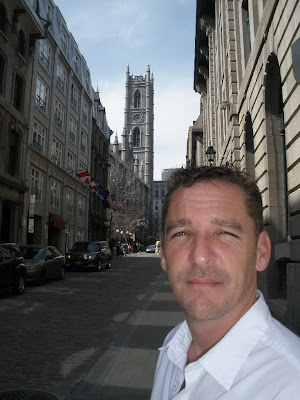 In the end, we got lucky again. The service was poor, but the people watching was awesome. There were a lot of angry customers there and the poor waitress had to deal with it. Apparently the cook and the busboy didn't show up. Lucky for us, we only ordered a beer. 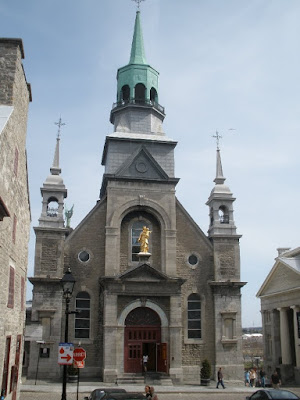 I pretended we were still in Europe. I mean why not? Lots of foreign languages being spoken and 18th century architecture make the old city very European. You know what I want to know though? How is it possible that there were flies and wasps out and about? They don't usually show up for another month. Where do they come from, how do they appear so quickly? It's like magic. 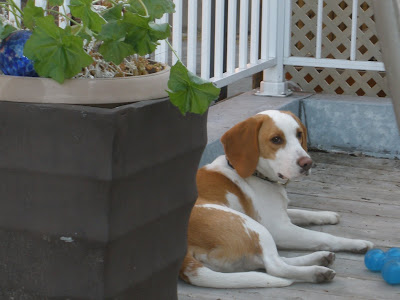 Georgie loves it outside too. He spent practically the whole two days out there. Have a happy Easter everyone!

Posted by tornwordo at 7:16 AM

Certainly nice day to spend in the sun.

Is that an Easter Egg hidden amongst the Ivy Leafed Geraniums? Be sure and bring them back in before the frost that is coming in a few days. Ted

It's unseasonably warm down here in southern New England too. 73F. Not bad at all. Heat is turned off, has been since late March.

Supposed to be in the mid to low 70's and high 60's all week. With night temps rarely dropping below 50F.

@Anon-Ted: That's one of those glass watering devices oft seen AS ON TV (see Torn's previous posts for more details).

Those types of insects spend time in a sort of "hibernation", based on temperature, I believe. Thus, the quickening with the warmer temps.

Yeah - you really hate it when Georgie dominates you.

Love them little fried onions! Haven't seen any in any store lately, must hunt. And Georgie is just trying to cuddle :)

We have shattered high temp records here, too. I went to church services on Friday and the pastor said that it was the first time in his 30+ years in ministry that he can remember having to turn on the AC for Good Friday services. Weird. But I'll take it!

It's so true how everyone spills onto the sidewalks as soon as it gets warm. When I walk Indi in the evening, the sidewalks are actually crowded in my little suburban neighbhorhood.

Glad you found the onions. It's the little things, right? I actually crushed some up last night and coated a chicken breast in them before baking. Yum.

Happy Easter (late). Sorry I missed it, but I was too busy enjoying this most wonderful Spring!

It's been beautiful here, too. I love the pictures of your excursions (and of course of Georgie!).


But then, I know this is temporary. In a few months I may well be complaining of the heat and going back to school in it.

Glass half full... that's what I've got to focus on.

I am very envious of your sunshine and warm weather, didnt make it over 11 c here and hailstones on easter day, still at least the daffodils are flowering now.

You must make a comfi cushion for Georgie.

You're so lucky to live in a part of the world that has such rich history and architecture. Seriously! Alberta is so "new" it's kind of tacky. Oh well.

Weather's beautiful here too. I'm loving it! Even though I still have a bit of snow in the yard...