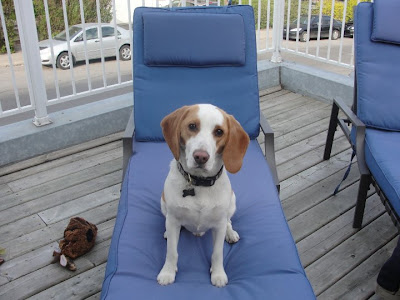 Another day, another Georgie pic. Just when I think he can't get any cuter, he does. The converse is also true, since just when I think he can't get grosser, he does. Case in point, yesterday he was toying with a little brown object on his doggie bed and Serge went to get it from him (he likes to bring sticks and such in the house and Serge doesn't like the mess) and then made a kind of GAH shriek. Twas a little turd (of his own) that he was playing with. Serge went out (after washing his hands) and found the half eaten movement on the patio. Why Georgie, why?

I also took him across the street yesterday to get his nails clipped. What a big baby he was. Just seeing the clippers made him howl that hilarious beagle howl. Both the groomer and I were laughing helplessly. He acted like we were jamming him with needles. He sure hates it so it takes two people to do it. That, or you have to sneak up on him while he's asleep or groggy and clip one or two before he gets wise to the operation. But that method takes me about a week to get the job done.

Saturday's meet up with the gang from our vacation in Cuba was fun. Everyone came over to our place first to have a drink and then we all went out to a restaurant.


We watched the last available season of Weeds over the weekend as well. With the way the season ended all cliffhanger like, there will obviously be another. Too bad we have to wait another year to find out what happens.


Other than that, we mostly blobbed around though we did manage to do a little work around the house as well. We're trying to pinch a few pennies before our little New York City junket a week from Friday. Oh and I lost a client. Sadly, I suspect it is discriminatory in nature. Everything was going along swimmingly until he asked a question about my wife. I had to correct him since I'm married to a man. After that, cancel, cancel, cancel and then evasive weirdness on the telephone when I tried to reschedule. Yeah, yeah it's his loss except why is it me who loses money?

Well pffft on that client - what an ass.

That really sucks about the job, but more about this/their attitude.

I do love how beagles bay. It's just great. But that boy has great posture in his pics.

Reactions like your ex-client's always surprise me. Here we are living our lives and all of a sudden we are kicked in the arse because of someone's ignorance.

I'm still trying to figure out what's wrong with playing with your own turd.

what a cutie pie

Georgie is a cutie. I enjoy all the pics. What can one say? One out three families have a scat lover in their midst.
Learn to lie like the devil. You should put a pic of a woman and kids up around your cubicle. That always helps too. Fuck em if they can't take a joke. Sorry for your loss of funds though.

Try bribing him when you trim nails. Treats before you start, then a treat after every nail. If you can get him to associate the process with treats, it'll be mush easier.

It would be interesting if you could verify that the ex-client acted out of discrimination. I would suspect that the laws of Canada are inclusive of gays. I also suspect that the question about your wife was his way of working on a rumor or suspicion. What would anyone's wife have to do with your job.

I love Weeds! And I do believe the next season starts this July on Showtime and it may be the last one.

Your client sounds like a very sheltered individual. If, as you said, things were going "swimmingly", what the hell diff would it make to what or whom you are married? None of his damn business in the first place. No, don't "lie like the devil" and feign you are married to a woman. I admire your honesty and also your attitude toward those who are narrow minded. You and Serge are such a cute couple. The dynamics of your marriage mirror those of mine (I'm straight)as far as the little tiffs you have. Just goes to show, a rel'ship is a rel'ship. It's his loss, but I'm sorry it impacts on *your* wallet.

Too bad your students don't have to pay some kind of nonrefundable deposit, so you'd at least get a little income from the occasional asshat.

Now, Georgie is another story. Still more adorable, and obviously becoming more comfortable with having his picture taken. You're going to make a professional model out of that dog yet!

I'll echo Mel's recommendation to add treats to the trimming process. My Sophie HATES getting her nails done still, but she barks with delight every time we pull up to PetSmart, because she gets a biscuit when she's done.

Your client is a jerk. Does it cost anything to pursue a claim for the balance due to discrimination?

I wonder how many straight men know that they are viewed in a much better light when they are so comfortable in their own sexuality that they don't care if someone is gay. It actually makes them more attractive.

I've heard there are pills you can buy that prevent dogs from eating their poop, by making it taste gross. Er, grosser.