So so sorry peeps for my long and unintended absence. It's been a difficult couple of months then followed by the most fabulous vacation of life. I can't believe it's over and all week I've been fighting the post-vacation blues. We got back one week ago. I thought a bit of therapy was in order so I've decided to blog the trip! All pictures and videos can embiggen nicely. Now if you are friends with me and Serge on FB, then you will likely find not much new. There will be more descriptions however, but the photos, while maybe not the exact ones posted on FB, will certainly ring a bell. The first thing we did was get a hotel room near the airport so we wouldn't have to stress getting to the airport at rush hour. 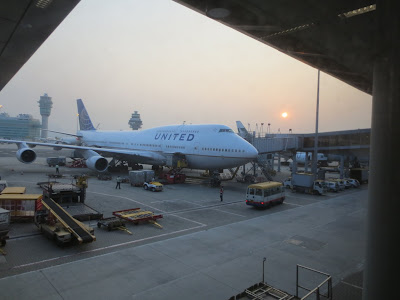 Our journey door to door lasted about 25 hours. We had a 16 hour flight from Chicago to Hong Kong. There was no personal entertainment system and I knew this so watched This is 40 on my ipad and the James Bond flick on the overhead monitor. Also, no more free drinks on overseas flights on United. At least not in economy. So, heh heh heh, I got an idea. we picked up some duty free booze at the airport in Montreal since there the boutique is after you pass US customs in the airport. If we had bought it in Chicago, they would have met us at the plane door making the operation more complicated (though doable as that is what we did on the way home). Anyway, our beverage of choice lately, vodka martinis, look just like water. So we filled up a couple bottles of water with our drinky drinks. Had that on the plane with a couple of melatonins and poof, be both slept for 7 hours. I have never ever slept on a plane before, so that was really nice. 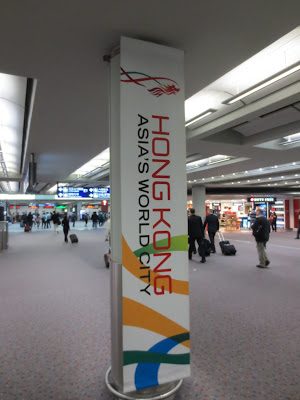 We arrived at the super modern airport around six in the evening. Even though we were exhausted, we were so excited to be back after twenty years. This is where Serge and I met two decades ago, and we hadn't been back since. We hopped on the special airport express train, about $12 apiece. I had already procured some Hong Kong dollars before leaving. I see so many Americans travel and spend their US dollars, but in general the merchants don't give a very good exchange rate. Much smarter to shop around and watch exchange rates and pounce when the time is right. 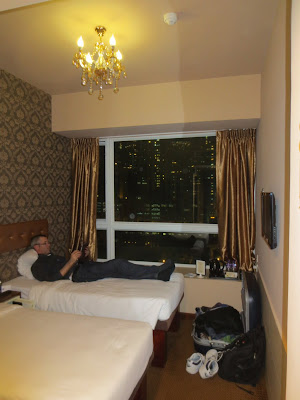 When we got off the airport train, there was a little shuttle bus to our hotel waiting. What luck! We were checked in in no time and checking our email and FB with the free wifi. So began our saga of REALLY SMALL hotel rooms. Honestly, the largest room we had the entire trip was on the cruiseship. 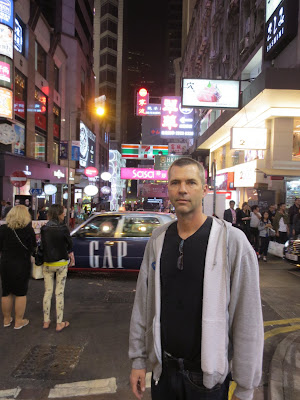 Then we headed out to explore and try to see if we could remember places we had been. Here is a jetlagged picture of me. We marveled at how many people there were everywhere. We found our old stomping grounds, Lan Kwai Fong, which is where all the expats used to, and from the looks of it, still do hang out. It was a crazy night since it was Friday. Here have a look.


The next day we got up late, like 10am and decided to have the hotel western breakfast, we just weren't ready for the local fare quite yet. Check out this breakfast menu: 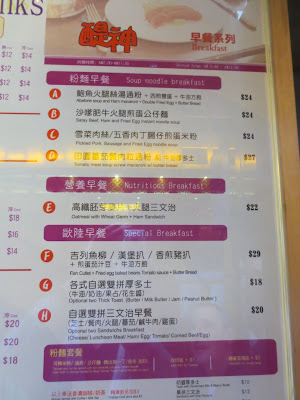 Abalone soup and ham macaroni? Thanks, I'll pass. Although abalone soup sounds really good, just not in the morning. Our hotel had some odd quirks. There was a sign in our hotel room announcing, "We engross in your needs," followed by a list of hotel services offered. Also, there were many missing elevator floors, no 4, 13, 14, 18, 24, 34. I guess 4 is a bad number there? Also, there was a marvelous rooftop pool but it was only open two hours per day: 10am-11am and 5pm-6pm. Lame. Still we went up to have a look at the city. 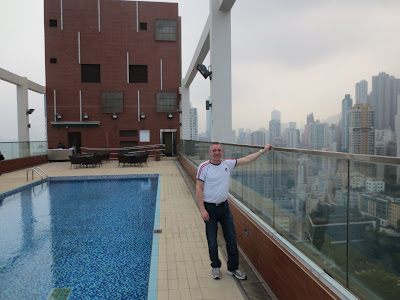 Then we were off on our next adventure, to try to find the apartment building where Serge used to live when he was there. It used to be way outside of the city, but now the city has expanded in every direction, especially up, so it didn't seem so remote. 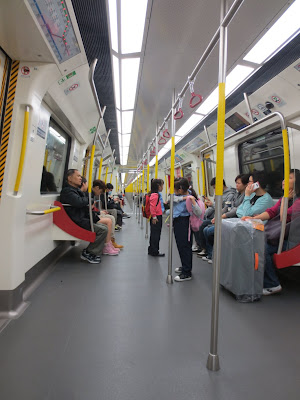 First metro, which were super clean and new looking. Then a commuter train out to Tai Po Market. Serge used to live in Tai Po, but we couldn't find his building. We looked and looked and looked. Then we walked around the market. 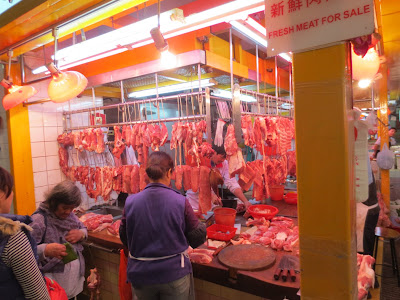 There was every fruit, vegetable, meat, poultry and fish product you could imagine. Most of the seafood was alive, so I suppose quite fresh. Serge said back when he lived there, they would decapitate the chicken in front of you, thus ensuring freshness. Glad I didn't have to see that. 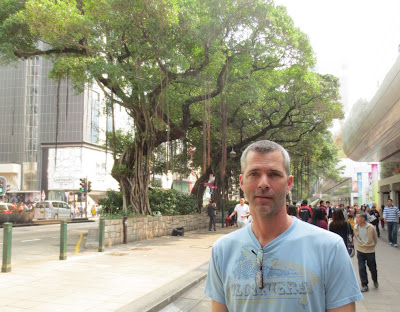 Then we came back and tripped around the Kowloon side of town. There were huge Chinese banyan trees lining the hoity toity street where all the designer shops were. Being a man of limited means, I never go into such shops. But even if I were uber-rich I don't think I would. Travel means so much more to me than things. 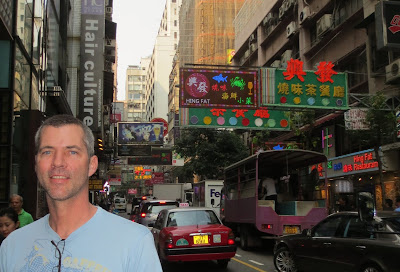 Typical food market lining a pedestrian alley. I had no idea what half of the things being sold were. 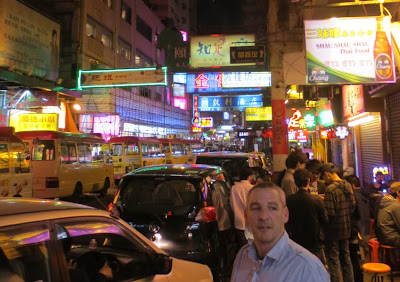 Typical night time street scene. Still the constant honking. We went to the Temple street night market and perused all the stalls. I hate the haggling scene so I didn't buy anything. Serge picked something up for his mother. Then we found this crowded place with lots of happy people eating, so we got a table and ordered beer and a plate of noodles for five bucks apiece. 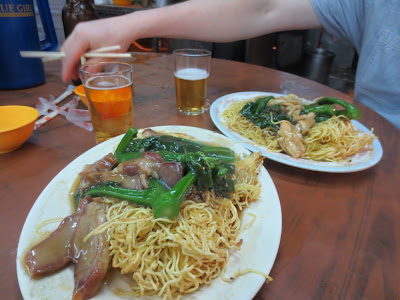 Our first local food since at lunch I was bad and had a sausage mcmuffin with egg, since that is on the menu all day in Hong Kong. It was one of the things I loved about living there. 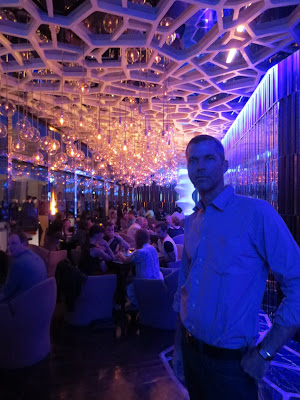 Then, due to a FB friend's suggestion, we made our way over to the Ritz Carlton hotel. Now when I was there 20 years ago, it was to help open the Ritz Carlton hotel, but 14 years later, they demolished the hotel to put up a condo high-rise. The Ritz is now at the top of the tallest building in Hong Kong. Here I am on the 108th floor. It was really high! 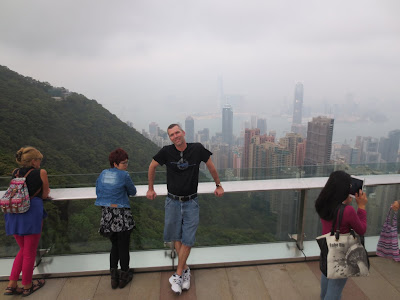 The next day, we took the peak tram up to the top and took in the hazy view. If you follow my left hand up to the really hazy building on the other side of the harbor, that building is the Ritz-Carlton building. Just barely visible. 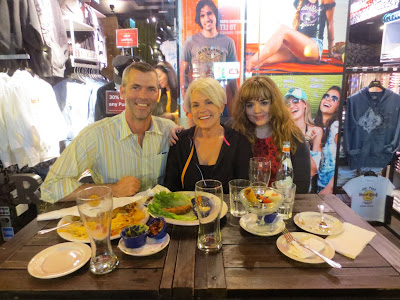 Then in the evening after some difficulty communicating, we met up with my brother's girlfriend and her mother. What a coincidence that we both booked cruises out of Hong Kong that departed on the same day? Our boat was heading north, and theirs was heading south. Anyway, they were pretty jetlagged but managed to meet us for some dinner at the Hard Rock Cafe. 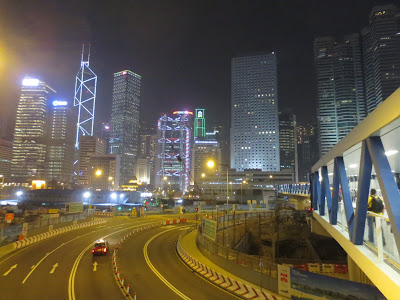 We escorted them back to the ferry and then got this great night shot as we made our way back to our hotel. Last night in Hong Kong. 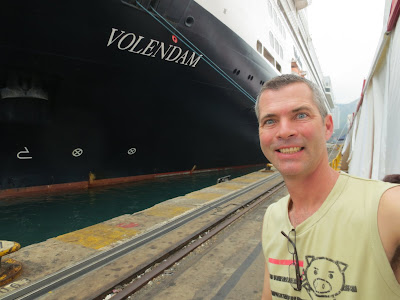 The next day was ship time. It was our first time sailing with Holland America. And now after having talked with others who sail Princess or Celebrity, I have come to understand that they ALL offer the same product, it's just presented in slightly different ways. Holland America seemed classier, I liked the sophisticated music for example, but the food, shows and casino and shops are identical to the other cruise lines. 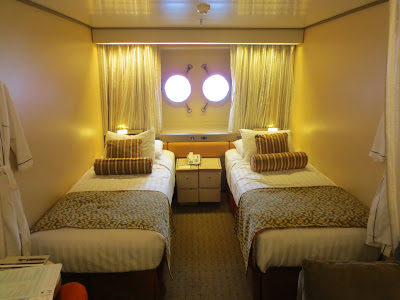 Our room looked snazzy. Normally, we ask the steward to put the beds together but we liked the layout better like this, so left them apart. 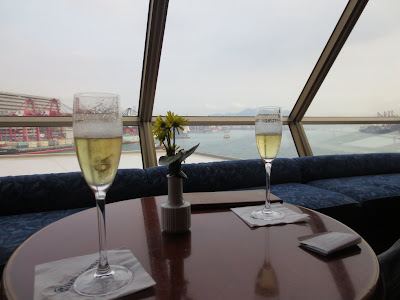 We had our first of many, many glasses of champagne. We were all about martinis and champagne this trip. We had the muster drill - practice what to do in case of an emergency. And then sailed out of Hong Kong harbor. 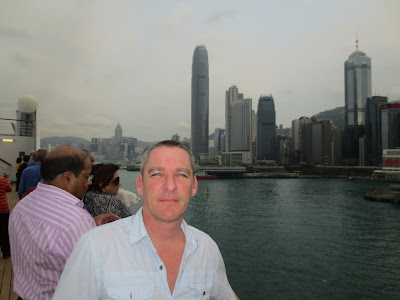 It was a little bittersweet since we had wanted to revisit the place where we met. Unfortunately the building was under construction. So no revisiting that fateful night. Oh well, hard to be sad when you are embarking on a 2 week cruise! Here's a video Serge took as we headed out. 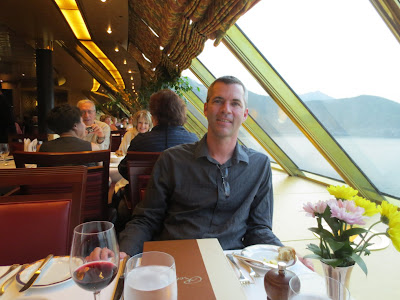 Then dinner in the main dining room. We got there first and took the window waiting to see who our tablemates would be. We had one of many filet mignon dinners that night. Oh and I got my Caesar salad with anchovies too. Yum. Stay tuned for the next segment on sea days and Shanghai.
Posted by tornwordo at 1:15 PM

I am going to tell my husband about this post because when we were in Montréal last October we stayed in a hotel with the smallest room we had ever been in (Hotel Zero) and couldn't believe how the car horns never seem to stop!

glad you two are still alive!

seems the only place you can build is UP in hong kong, eh?

looking forward to reading more about your trip; a bientot!

NIce post. Better than your FB posts - not that there was anything wrong w them. Looking forward to the next installment.

I'm soooo glad you finally posted about The Trip! It totally looks like an effing nightmare for me because I hate crowds and weird food and planes, but you look so happy in every pic! Can you believe it's been 20 years?

I can't wait to read about the next leg of your Amazing Race! :)

Looks like a great trip (was it a transition cruise bringing the ship to the west coast, or a regular route?) - I like the Rotterdam of all of Holland America - but that company the best of the big three.