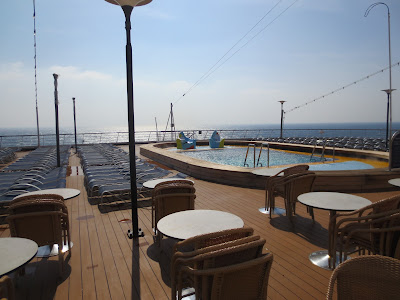 When we woke up the next day, we were at sea again, heading North. It started getting colder and colder. Hong Kong was in the 70's, Shanghai in the 60's and now we were heading to Beijing where forecasts were for highs in the 40's. Still, it wasn't as bad as back home where they were dealing with yet another foot of snow. 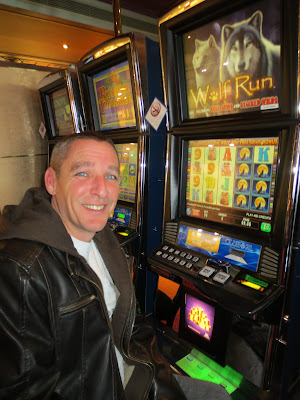 On the first day of the cruise we both put twenty bucks into the slot machine. I never put more into the machine and managed to play every day a little bit and I finished with $110. Not bad eh? Sadly, I think Serge put about that much in. I'm a very frugal player, if I lose ten I stop and if I win a little jackpot, I stop. The last day I hit a nice $90 jackpot and then said, "I'm done!" That's how you leave a winner. 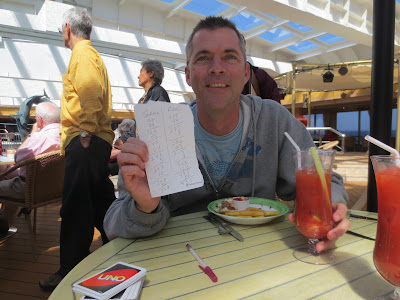 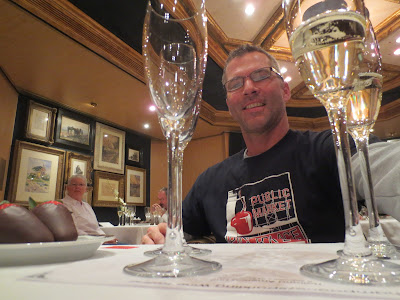 And Champagne tasting with chocolate dipped strawberries. Serge asked if the guy would saber one of the champagnes and he did it! It has to be really cold and you have to target the seam on the bottle. We all drank out of it, it was a clean break I bet HR wouldn't approve haha. 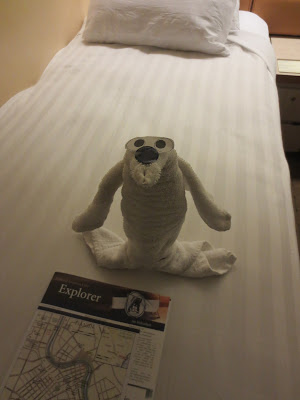 Each evening after dinner we came back to a different towel animal creation and the info for the next day. All the cruise lines do this, but the first time you cruise you think it's a unique, fun thing that only that cruise line does. It's cute but no, I do not want to buy the book on how to create them. 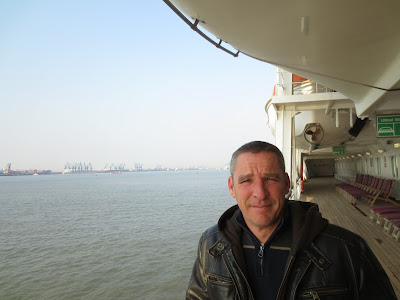 Then we arrived at the port that was built so cruise ships could dock and passengers could see Beijing and the Great Wall of China. The only way to do that though was to book an overnight excursion at $850 apiece or two full day excursions (like 12 hour days) for $500 each. So we decided not to do the Great Wall. I know, I know, but honestly, it has never really interested me all that much and as Serge said, Google Earth is practically like being there. We instead booked a shuttle to Tianjin, 4th largest city in China just an hour and 15 minutes from the port and the second day did the all-day Beijing tour. Beijing being 2 and a half hours from the port by bus. 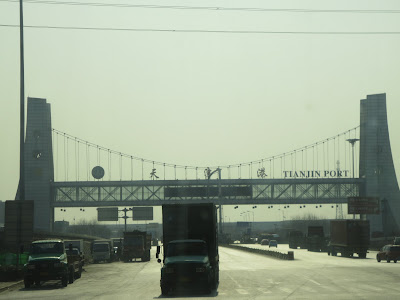 The Great Wall people had to take a bus 3 and a half hours to get there and another 3 and a half to get back. Our little jaunt left at the leisurely hour of 9. As you can see, the tales of polluted air are true. And even though we saw coal smokestacks belching smoke everywhere, the Chinese will tell you it's just dust from the Gobi desert. Propaganda at work ladies and gentlemen. 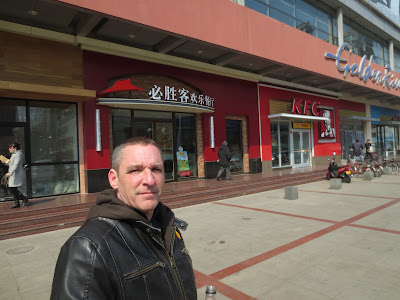 When we got off the bus, the bus escort was giving everyone instructions on getting a taxi to downtown. Not Serge and I, we like to WALK a city. So we spent the next four hours exploring with our handy-dandy map. A city of 14 million that we had never heard about, but multi-national chains certainly had. We saw mostly KFC and McDonald's but Pizza Hut was pretty frequent as well. 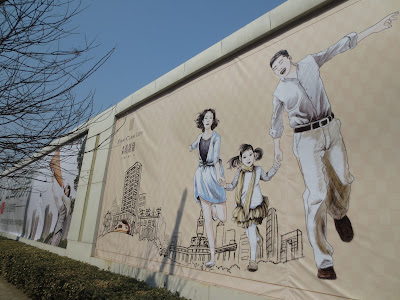 This was an advertisement for a huge set of condo towers going up. First Class Life is the name of the development. 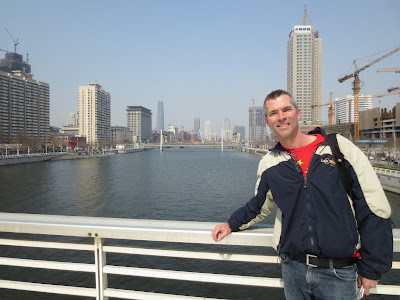 There is a lovely river slicing the city in two. There were quite a few bridges spanning the river and each one had a unique flavor. We walked all the way to where that really tall building is in the way way background. 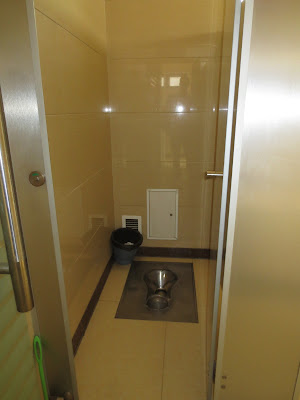 There were public restrooms but they looked like this. Thank god number 2 was not on the agenda. Also, I was happy they had urinals. When I tried to pee in a toilet like this in Croatia, my aim was not so great (the hole is not very big) so I kept splashing my feet. 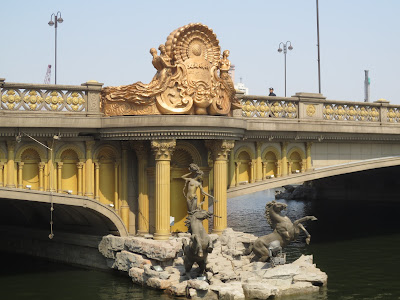 The bridges were so European looking at some places. 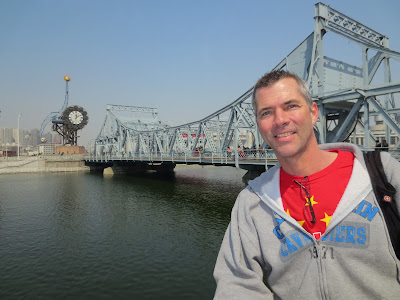 Others weren't as dazzling. Though we did like the dali-esque clock in the background. 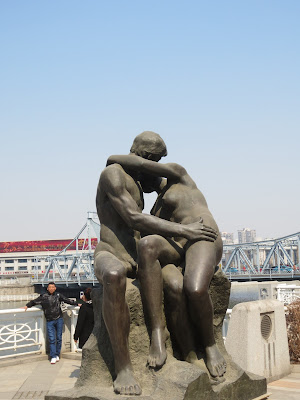 There was a whole series of naked statues groping each other. I was surprised at the penises. We don't see that in North America on our statues. For some reason, I thought the Chinese would be more uptight about that like we are. 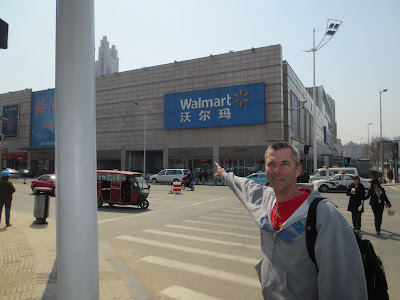 I don't know why I was surprised but there it was. And just behind there was a Starbucks! The baristas even spoke English and helped set our ipads to use the free internet. Free internet is fun but all we could do was text since email, Facebook, youtube and Google don't work. All our loved ones were asleep back home, but we texted a pic of us from the cafe. Kinda like an instant postcard. 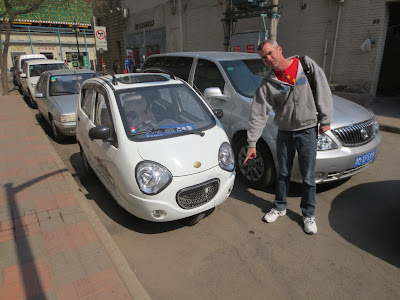 They had funny three wheeled cars too. We were on a nice gentrified pedestrian only street and ventured off to see the antique market. It was lame. Antiques meaning old junk no one would ever be interested in. I later learned that the Chinese are not allowed to sell REAL antiques to outsiders. 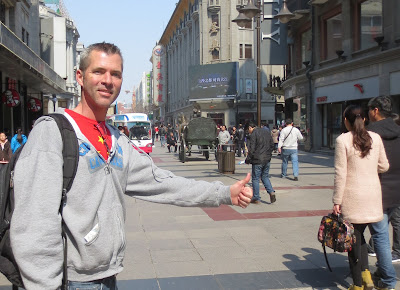 So back to the pedestrian street where it felt safer. We kept seeing this in China, there is like a modern facade presented but if you just pull back the curtain a bit, you see squalor. They still have a ways to go. 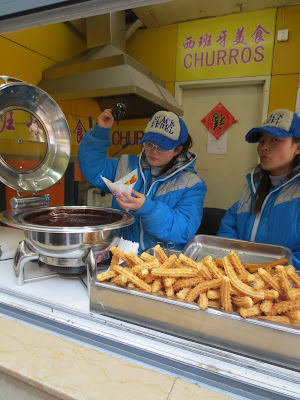 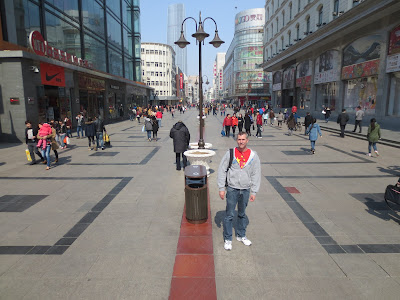 I think I counted 7 McDonalds on this street alone. There were other chains you would recognize too, like H&M and Aldo. After this, we needed to loop back to where the bus had dropped us off. We could have taken the subway but it was such I nice day, we walked. 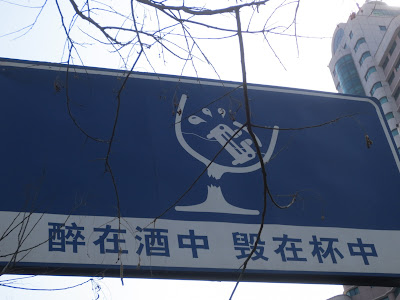 There were many odd roadsigns that we had trouble interpreting. We thought this was don't drink and drive. 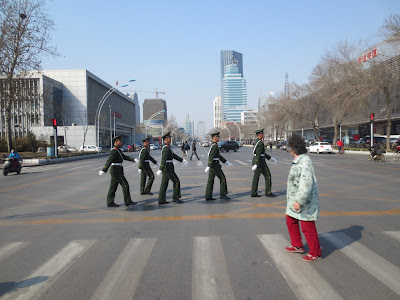 We got back to the bus area a bit early so we wanted to visit a lovely looking park. Unfortunately, there were soldiers guarding the entrance and refused to let us pass. I think it was some kind of government official's place. Serge thought the cadets crossing the street reminded him of the Beatles. 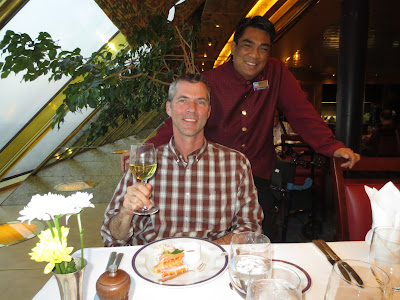 I was anxious to get back to the boat because I knew the menu would be awesome in the dining room. When many guests are not likely to be there for dinner, the cruise line will put really good stuff on the menu. The great wall people weren't coming back until 9. So we had two plates of crab legs and then filet mignon with lobster. Yummers! Tomorrow, Beijing!

aaaarrrrgggghhhh, the american chains have invaded; run for your lives!

you are doing the rest of us poor schlubs a favor by posting these travelogues. I don't think I will ever make it to china since I have a fear of flying/heights.

I enjoyed the pictures on Facebook but I am really loving the pictures and narration here. Probably the only way I will ever get to visit there. Thank you for sharing.

I thought of the Beatles too!
I would have gone to The Wall, mostly because I'm a chicken heart. So cool that you guys went somewhere off the beaten path.
I've always wanted to go on a cruise...every time you do, it makes me want to do it more!

well if you're not going to make me a bunny out of a towel, I shant be staying with you ever!