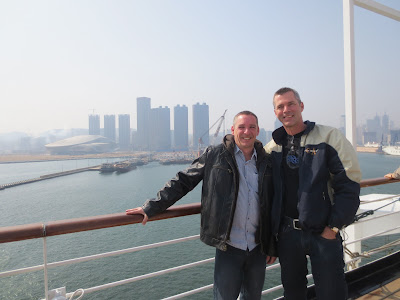 After we left Beijing, we continued North to the city of Dalian in Northeast China. As you can see, the air quality hadn't improved and it was decidedly chilly when we arrived. We had a tour scheduled for the afternoon so we hung out on the boat all morning. 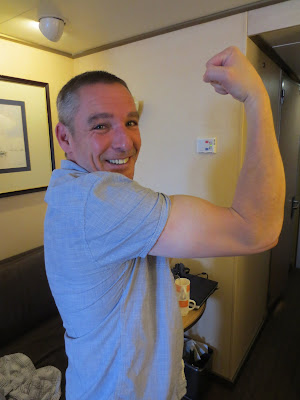 We worked out in the gym and Serge showed off his manly biceps. 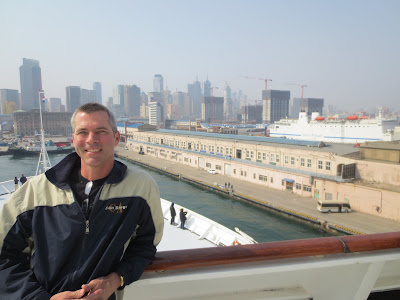 As you can see, it was a pretty big city. There were again cranes everywhere as skyscrapers were being built. The tour director on board ship kept making the same lame joke, that the national bird of China was the crane. 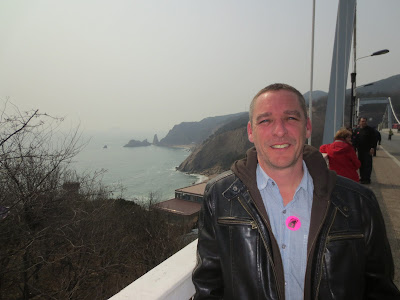 The first stop on our excursion was a bridge. We walked across the bridge. They seemed to be very proud of this bridge but it was really nothing special. They also talked about this coast being where couples often marry. 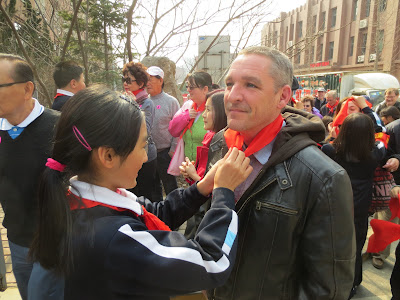 Our next stop was a school. We arrived a bit early so had to wait for the children to get ready for us. Basically we arrived, the children put bandanas on all of us and then we went into the school theater and watched children perform, dance, sing etc. It all felt very propaganda ish. I don't know why but it seemed fake somehow.

But kids are kids wherever you go, each one with their own personality. I like the giddy boys at the end of the video. 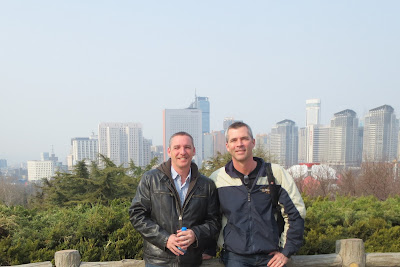 After the children's show, we went to a lookout over the city to take pictures. This excursion was kind of a dud. We would have had more fun just walking into the city and exploring. There was another stop at the public square and then back to the ship. I spotted a mailbox so I ran to send my postcards. Unfortunately I had forgotten to address most of them. Doh! Oh well, at least my mom should get hers since I know her address by heart and had written it. 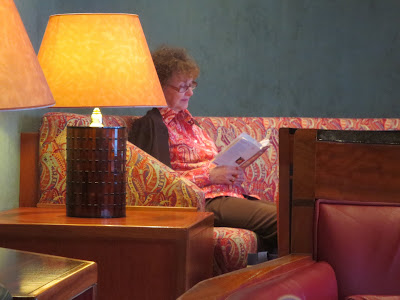 We got back in time for happy hour. We were snickering at this lady when she came in and sat down. There were other patterns and leather sofas but no, she picked this sofa to sit on so it looked like her head was floating. 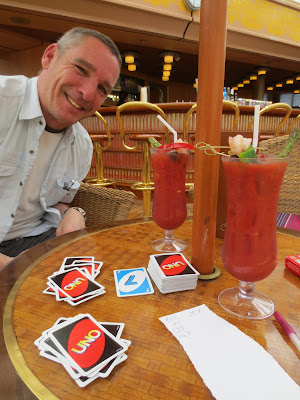 The next day became known as our drunk sea day. As you can see, we got started in the morning. We had reservations at 2pm for the "Walk Around the World" wine tasting. 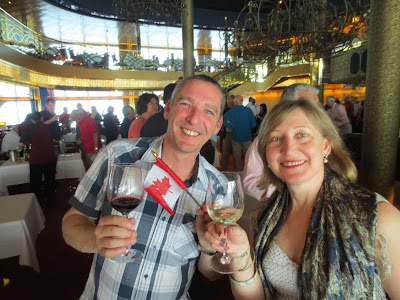 That's where we hung out with Marina, the only other Montrealer we met on the whole vacation. The wine event was all you can drink for one hour. We wanted to get our money's worth of course. 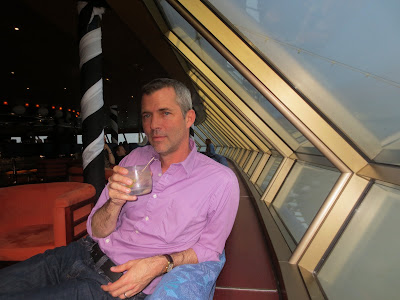 Then it was Happy Hour, so of course we took advantage of that. Hey we weren't driving. 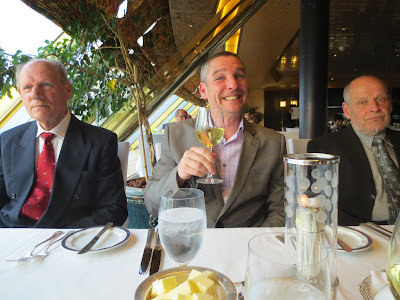 Then we had wine with dinner. We were already looped. Our tablemates don't look any too happy, but they were pretty gruff most of the time anyway. Great shot though.and a bottle of champagne after dinner. Then one of the crew bought us another bottle of champagne and it was time for the Captain's ball. This is the only night there was any action in the big dance bar because all the officer's were there and dancing with the ladies. Serge and I danced together (even slow danced and kissed on the dance floor) and one of the passengers came up to us after and said, "Good for you, boys." We may have made a spectacle of ourselves though because all the next day, people we didn't know came up and asked how we felt.


I wasn't too bad, but I wasn't in great shape either. Later at happy hour, the waitress reminded us that we finished the evening with vodka martinis, something both of us had forgotten. Might be time for AA. 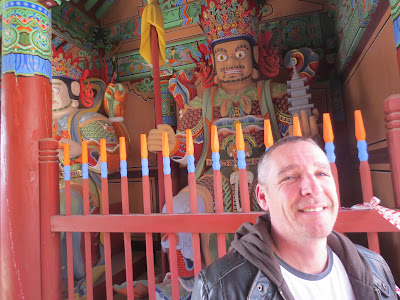 We had another tour booked as we were now in South Korea so off we went up a mountain to see another Buddhist temple. Yawn. Even though North Korea had started threatening attacks, the South Koreans didn't seem scared at all. Apparently, they always threaten to attack and then never do. 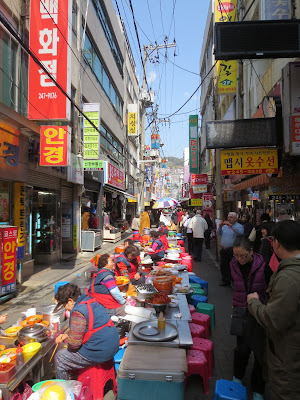 Then we had some free time at a street market. We hadn't bothered to get any South Korean money, but they took US dollars too so Serge and I got t-shirts. 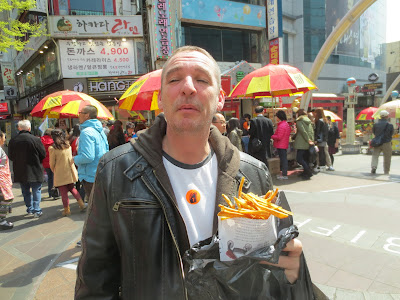 We also had a mystery food item. We think it was fried sweet potatoes, but they were hard, cold and crunchy. Would have preferred them hot. 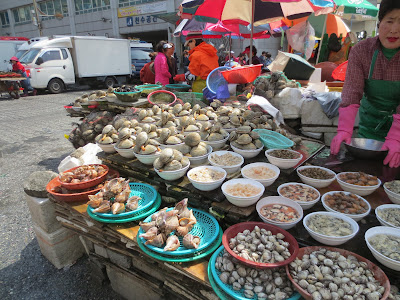 Our last stop on the tour was the fish market. The port was kind of far from the heart of the city but we wished we had just taken a taxi and explored ourselves. Next time we will keep this in mind (and save $$ too). 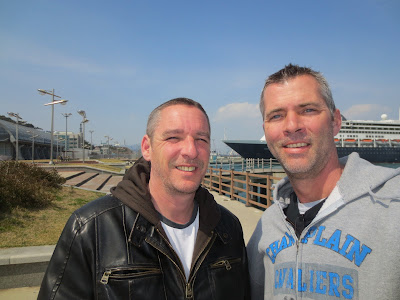 We walked around a little and then Serge went and took a long nap. They had wifi in the port terminal building and since we were no longer in China, I was able to hang out and play all my turns and check my Facebook. That evening was standard, happy hour, dinner, happy hour, show and nighty night. There was frolicking aplenty as well, but I can't remember which nights.
Posted by tornwordo at 4:20 PM

I love the stealth lady on the sofa and the two grumpy curmudgeons! I'm glad you danced and kissed in front of everyone, love is life!!