The road to Montreal part 4

The weeks passed. Serge and I met on the weekends and lamented my impending departure. At the end of my gig living and working at the Ritz Carlton, I checked out and went to the airline office to change my flight back to the states. I extended my stay by four days and went to stay with Serge. This is when we came up with the plan. The plan went something like this: I go home to Los Angeles. Serge gives his notice at work and flies to LA to join me. We find him an apartment and continue building a relationship. Only of cursory concern was the fact that we were of two different nationalities. In our minds Canada and the U.S. were practically the same. I worked with a few Canadians and they didn't seem to have trouble working in the states. (Later I found out they DID have difficulties working legally.)

A word about naiveté. A friend of mine recently commented on my writing "voice". She said it was the voice of a jaded soul longing to be naive again. I liked this description and found some truth to it. It's true I long for innocence, because I look back to times like this and I realize that due to our naiveté, we are now living here together twelve years later.

Because, if we had known better, we would never have embarked on such a hair-brained journey.

But embark we did.

A month later in October 1993, I met Serge at Los Angeles international airport and brought him home. He was wide-eyed and star-struck, and felt like he was living his dream of beaches, palm trees, sunny climate and the all American boy he snagged.

Within a few weeks, we found him a place to stay near my apartment in Venice. (We weren't quite ready to commit to living together yet.) Then we set out to find him work and soon had to face the fact that employers required documents - piddly little things like U.S identification and social security cards.

My Mexican friends hooked us up. We entered the underground world of counterfeit document manufacturing and soon procured a green card and social security card for him - both fake. At the time this was what I loved about America, if you wanted to buy it, there was always someone selling it.

(We did get Serge a real Social Security card which was required to get a real California driver's license, but the real SS card had "not valid for employment" printed on it. Nowadays, you cannot get a DL with this kind of SS card. They changed the law about 1995. You know this will come into play later.)

So he used the fake social security card with the fake green card to gain employment.

There was something completely thrilling, an "against all odds" feeling we began to adopt as our love flourished. It all seemed so forbidden, and therefore, all the more exciting.

In February 1994, Serge wanted to pay a visit to his family whom he hadn't seen for over a year. I knew nothing of Montreal at the time and wanted to visit with him. So we bought round trip tickets LA-Montreal and I was able to visit Montreal for the first time. It was my turn to be starry-eyed. I was enchanted by the snow, the architecture, the French language which were all foreign to me at the time. I met Serge's family and friends and got to see the main sightseeing places around town. I loved the nights out we passed in the gay village. I imagined living there someday. 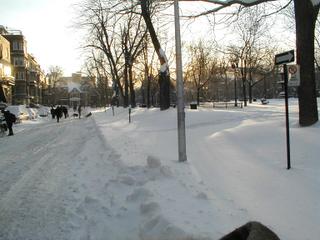 When we went to the airport in Montreal to return to Los Angeles, Serge was detained by U.S. immigration officials. I had to board the flight alone, not knowing what had happened. There were tears on that plane.

As it turned out, Immigration had found some telling documents in his wallet after Serge had answered "I'm not really living anywhere right now," to the question, "Where do you live?" They barred him from reentering the United States for five years.

Our plan seemed to be unraveling.
Posted by tornwordo at 6:50 AM

Despite knowing the end, of course.

That sure quite a part 4 there ;) I might be more careful inviting you to poker, knowing all the fake stuff you did =P hehehe

You are living there together twelve years later? Ahhhh, I didn't realize your spouse is Serge!
(Maybe I missed a staff meeting or something along the way. Or I'd forgotten his name from an earlier posting. Duhhh.)
So, the basis of the story is how you met Serge.
I see.
The plot thickens....

Oh, yeah...
and that's really a beautiful snowy photo of Montreal.
Crisp, clear, and the lighting and shadows are perfect.

I used to go down to Mexico on a weekly basis before I turned 21 when I was in college. The border patrol would always ask, "Where do you live?" I always thought it was the most innocuous question for re-entry into the US. Why not ask us something more specific?

Even with that said in my drunken stupor I used to practice saying, "I'm a US citizen." walking from the bar in Nogales to the border crossing so as not to mess up and get arrested by the border patrol.

I was away and am just catching up...I am dying to read the rest.