This is a better souvenir

Last week, when we were camping in Big Sur, I decided to take spouse down to Hearst Castle for a tour. I had taken a tour there about 20 years ago and remembered it being mildly interesting. It was then surprising when it turned out that I didn't really remember anything and that it was highly interesting. 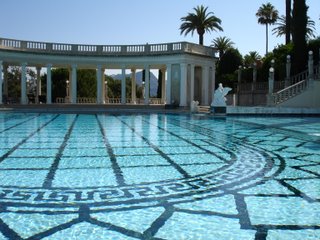 There was a tapestry there that was owned by Louis the fifteenth. The guide pointed out that the Louvre had a copy of the piece, and seemed to gloat over how uneasy that must make the French feel. Apparently Hearst was an art collector and there were beautiful sculptures, paintings, tapestries and other antique pieces, many of which are worth over 10 million bucks a piece. 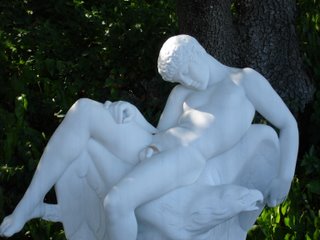 I never manage to get out of a tourist trap without being dragged through the "gift shop". I'm putting quotes because I believe it's a misnomer. Selfishness shop would be more accurate. Or Souvenir shop at the very least. I'll bet less than one percent of that crap is bought as gifts. Keychains, photo frames, t-shirts, yo-yos, snow globes, teaspoons, pennants, crap, crap, crap.

I did see some authentic Pick Up Stix, made out of wood even! For a moment, I hazed over with nostalgia, then looked at the price and slammed it down in disgust. 20 bucks for some oversized toothpicks.
Posted by tornwordo at 8:53 AM

That pool is aMAzing!!

And I'd like to know someone who modeled for that statue. wowza! :P

Gift shops...pffft, I ignore em. All I really want is photos. What I take is of more interest to me than the crap in the gift shops anyway.

Gotta just love being "guided" to the exit through the gift shop.


Friends of mine remember swimming in that pool in the early 70's. Their parents were caretakers on the property, and when none of the Hearst folk were there (they used to come up and have parties), they were allowed to use the pool.

It would be very nice to be able to swim in that pool, or any pool, or lake, or pond or puddle, these last few days.

I really enjoyed Hearst Castle when I was there back in the early 90's and would love to go again. I don't remember the gift shoppe being such a major focus though...maybe that's just a new moneymaking/marketing tactic. The ride up the mountain on those buses was rather white-knuckle but the reward at the top...spectacular!

so that it doesn't look like this is the only thing on which i'm commenting, first things first:

wow, nice pool!
i agree, "gift" shops are the worst but i'm always compelled to look around.
and... i used to love pick up stix. i guess they think nostalgia is worth 20 bucks.

ok now. please tell me i'm not the only one that wonders if it was you or serge who placed that leaf there.

Great post! Great pics!
Hate giftshops - they shouldn't be allowed to be called that! But again, "thief-shop" doesn't sound as appealing. Neither does "buy our crap for loads of money"... :)

San Simeon is a sight.

I wouldn't mind living there, even if I have to work as a naughty french maid.

I love visiting those old homes (castles lol) and going on those tours but they do always lead up to you buying something at the end that you will 1) end up throwing away), 2) giving to someone (who will eventually throw it away) or 3) store it away until you throw it away...

I think your PayDay candy bars are a much more "thoughtful gift". They even have the hint of nostalgia about them. Are you going to share? ***grin***

I am a sucker for the gift shops! In fact, when we came back from our holiday, we had to buy another bag to haul back all our souvenir crap. You know how I love the fridge magnets! Well, I also love coffee mugs and returned with SEVERAL! And I did buy crap for other people. Who doesn't need a lighthouse bottle opener?!

(Oh and Rebekah, I love your new profile pic!)

I usually buy mementos for people that I know if I am on a big trip. Though, I also try to avoid “gift shops” to acquire said items. Anything with the name of the location stamped on it should be avoided, IMHO.

With globalization, it’s getting harder and harder to find items unique to a particular location. Of course, I also try to travel with as little baggage as possible, so things that I buy need to be light and preferably flat.

Aside to Rebekah: I am with Chunks: I love the new photo.

OMG, you just reminded me of my trip to Cali back in 2000 with my bro and another friend during Xmas. We drove from L.A along the PCH to SF. Stopped at the Hearst castle and slept at a little motel at the bottom of the Hearst mountain by the Beach. I even remember getting drunk on 3 bottles on red wine by a camp fire, in the pitch black and walking towards the sound of the surf, only to fall 10 metres off a cliff...well slide was more like it.

great pics by the way!

When we ewre in Hawaii we bought souvenirs at Walmart! We actually did bring stuff home for people. The only thing I bought for myself in Hawaii was a baseball cap and a Puka shell necklace, oh and Kona Coffee.

LOL the pick up sticks.

Love the pictures! Especially the one of the statue and the extra adornment on its genitalia!

I agree with you about the "gift store". Love the word crap.

Damn it, I never got to see the Hearst place. When we got there, it was closed.

I'm with you. I hate "gift shops". But you're peeking my interest in the castle