We got back Monday morning at 2:15. We were awoken at 4:30am Sunday to get to the airport for an early morning flight to Salt Lake City. For some reason, there was no ticket in the system for Serge. A panicked and assholey version of me called Orbitz to get it cleared up. From there, we connected to Atlanta for a 3 1/2 hour layover and we finally landed in Burlington at 11:15. Even our luggage made it! We took a cab to the hotel where we had left our car 2 weeks prior and headed for home. I never knew sitting on one's ass was so exhausting, but I assure you it is. A little over 18 hours door to door. Too long. Anyway, I thought I'd trot this out over a few posts starting with the beginning. Burlington. 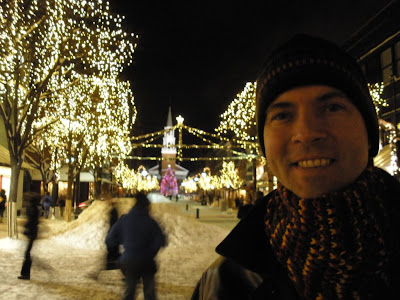 We decided to leave early because of a big snowstorm predicted. Serge had fallen sick the day before and was running to the bathroom every ten minutes shitting water, cramping, and even vomiting. He got it together enough to hold it for the 3 hour drive and after checking into our hotel, we headed to the "downtown" of Burlington, a cute University town in Northern Vermont. It was butt cold, man. We kept dashing into stores to escape it. We were looking forward to getting out of here and away from the snow. 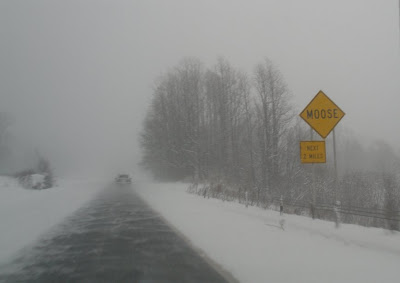 The next day, the slated snowstorm day that we had left early to avoid bore down and we decided to drive to the Ben and Jerry Factory since it was only 2 exits down the interstate. Little did we know 2 exits was 26 miles. It was pretty scary and when we got there, there were 8 employees milling around and just us there. Serge and I got a private tour with the goofy guide. Vermont really reminded me of that old show Newhart when he ran the Inn in Vermont. You really don't know if you are supposed to laugh or not, never quite sure if something was said as a joke. 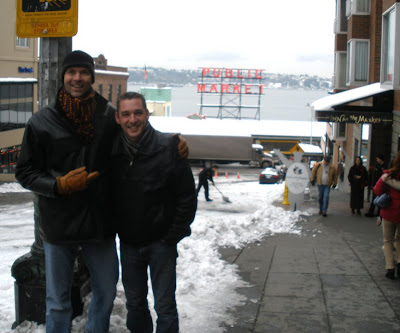 The next morning we were offered 2 free round trip tickets in the US to give up our seats, but we declined, eager to be on vacation in milder climes. Ha! Seattle was a cruel joke, snow everywhere, and a city that I promise you is totally inept at dealing with snowfall. Driving was a nightmare. I saw a lady digging her car out with an ice scoop and another using a baseball cap, the brim as the shovel. 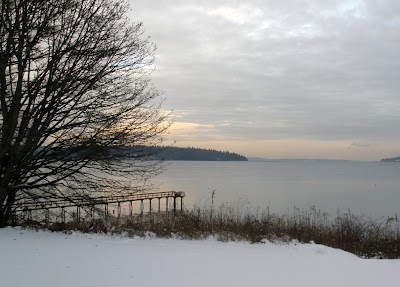 It was just one night in Seattle though before we went to the cottage the folks had rented for this family holiday. It was out on the Kitsap peninsula at Port Gamble. Brother Chris, Serge and I shared it with them for 5 days. Here was the view from our room. 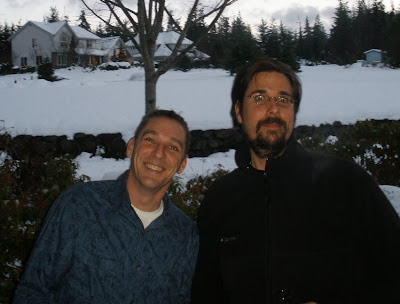 I haven't spent this much time with Chris (now a Phd!) since we were kids and we fell easily into a comfortable rhythm. It's funny, nostalgia seems like the glue that bonds family together. 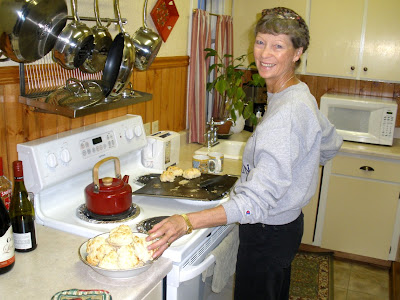 Mom in one of her elements - the kitchen. The other is the sea of course. Here she is making hot buttered biscuits at the cottage. They were divine. 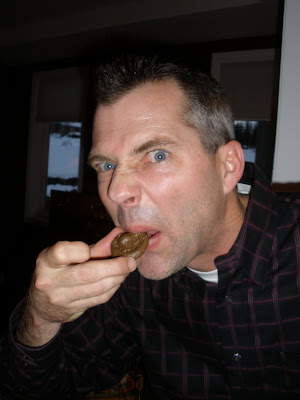 At Christmas day, we enjoyed lots of food and champagne and enjoyed watching the kids open their gifts. One of them received a kit of tricks that included this fake dog poo. He was thrilled to receive this kit and it was so cute seeing that enthusiasm I once felt for these kinds of gags. Oh I still like them, but that electric giddyness he was exuding was just like me at that age. So cute. Anyway, included in that kit was also a "snake in a can" trick only this one seemed decidedly less explosive coming out of the can. Maybe they had some lawsuits? Here, watch the brother show you.

Posted by tornwordo at 4:44 PM

Well, why don't you try traveling in just a few more places on your holiday next time. My god, you literally criss-crossed the entire continent! Happy returns and Happy new Year. And you thought you were getting out of the snow and cold temps!

I would have given up my seats for return tickets around the world. Otherwise? Nah.

I love Vermont! You should have gone on down and toured the cheese factory at Ludlow! Talk about quaint! (or it was)

Yay! A Sticky Crows post. Now my life is complete!
The view of Kitsap is gorgeous, even with the snow.

My son still has his "snake in a can" (that pops completely out) and the fake poo. He calls it Winnie. Ba dum bum.

That was funny. Glad Serge is okay, though I swear I saw you at California Adventure yesterday.

Welcome back! I love Burlington and the coffee shop Muddy Waters. That view from the cottage looks incredible. I can't wait to read more about your trip.

welcome back - I've missed your posts!

Happy New Year! That snake in the can made me laugh.

I remember when that snake would pop out like a rocket. Scare the shit out of anybody. Your right...probably law suits.

Glad you're back safe and sound. Looks like a wonderful trip.

Welcome back! Lots of travel, I'll bet it feels good to be home.

Hoooray -- you're back! And with tales of your travels and loads of pics!

A private tour of Ben and Jerry's? Impressive.

Just thinking about hot buttered biscuits has me salivating.

And is it just me or is that one VERY phallic snake in a can?

Yeah, that looked like a Trouser Snake in a Can to me too!

I like that you are nibbling fake poo! It's such a Tornwordo thing to do!

Eighteen hours is a long time to travel without crossing an ocean.

Glad to hear that you are back safely.

The next time you do Christmas and travel, perhaps the deserts of Arizona or Southern California might be a better pick. Apologies for the Seattle area, we are totally unable to deal with the rain when it freezes into that white stuff. I don't even own a snow shovel, or chains for my car. I think I shall invest.

It looks like you have fun, despite all the mess. I have to admit that 18 hours is a long time. I went to Ireland in November. I booked the flight myself (the cheapest routes) and the return took 25 hours total. Next time, I fly direct to London, and then hop over...

Are you sure that the snake in a can is really a children's toy?

P.S. Welcome back to the blog, I missed you.

Lord; no wonder you're tired. that journey sounds exhausting.....

Oh that vid of Chris is so adorable.

And God! I am shocked at the pics. When you said snow I just wasn't thinking *that*.

Welcome back, we missed you.

Your brother's cute, too. That snake in the can was kinda pervy, heh.

I'm so happy you are back at last! Can't wait to hear about the rest of the trip. And I'm also glad to see that other places have all the snow that we don't!

Yes, Seattle is completely unequipped to deal with snow. When I lived there, the legend was there was only a single snow plow for the whole city, it couldn't scrape most of the roads because of the bumps on the meridian, and on at least one occasion it was, get this, snowed into its garage. Probably all lies, but after a little time living there, they become at least plausible. Of course everyone believes that the people who can't drive in the rain all come from California.

I would've been very nervous flying out of Burlington in that weather. Ben & Jerry's sounds good though. My 18 yr. old son is the manager at our local scoop shop when he's not at college. Glad you're home.

Good to have you back, Torn! I am considering Burlington for grad school. Don't know if I can handle that much cold, though.

That really looks like a trouser snake in a can. Wow. Funny!

it's old news, i know, but that post about Gina Limongelli! i laughed so hard i (almost) peed in my pants. great blog, btw!

It's true about Seattle. I grew up in Alaska, but I tend to stay out of everyone else's way when there is snow here - it's too dangerous to be around so many dazed and confused drivers.

Sounds like a nice Christmas! Your brother is funny with the 'snake in a can'!

All the pics are wonderful. Wonderful. Your brother is cute.