It was our last night in Vancouver last night so we went out to a nice restaurant in the old train station near our hotel. Midway through the meal, Serge said to me, "To dine in a fine station is to complete a fine trip." I was so impressed with the poetic way he came out with this phrase and we toasted to such a fine sentiment. It wasn't until we were on the way out that I noticed the big poster that you see above. The twerp was going to let me think he came up with it. I should have known better. 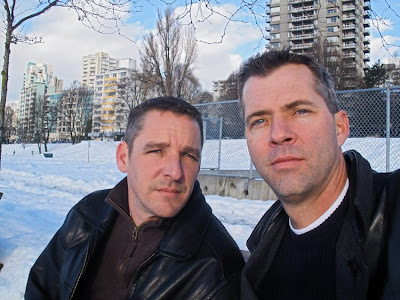 It was like we brought Montreal's climate with us. Snow everywhere. Though it's mostly been raining since we got here, there is so much snow that it hasn't melted. Here we are down at "the beach" though you can't really tell because of the snowcover. We had one nice day with even a bit of sun and we spent 6 hours trekking around the city on foot. It's a cute town and we've had some delicious meals. 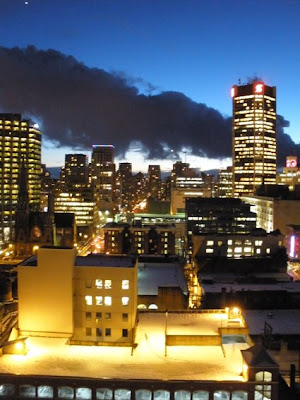 The hotel was awesome. We got a deluxe suite and I think this is the best hotel room we've ever scored from Priceline. Here is the view from our window. Yesterday, we spent the day at the science center and Serge and I became kids again. Today, we're driving back to the states and flying down to Southern California for the last leg of our trip. Everything has been wonderful so far except for the fact that I discovered I'm getting grey nose hairs. I suppose it was only a matter of time, but I don't like it.

Vancouver has to be one of my "World's most favorite cities". Along with Berlin, Amsterdam, San Francisco, London....and a few others. And the snow just adds novelty to it's beauty. Enjoy the rest of the trip!

I love Vancouver, too. And yeah, grey nose hairs suck.

Yah thanks for bringing that MTL weather with you. I sure hope you take it home with you too!
Have fun in shopping in SoCal. I was there a couple of weeks ago and the sales were insane. I guess it is a sure sign that their economy is in the toilette.

Oh Hell NO! Say it ain't so Torn! Grey nose hairs? Get the Colorist, get the Just for Men nose and ear hair dye! It is only a matter of time until the grey hair descends to a lower area. Just remember: because there is snow on the roof doesn't mean there isn't any heat in the furnace. Enjoy your trip and it is okay to become kids again. ed

Serge friggen cracks me up! What a hoot!

Serge is so much like Derwood, he'd have taken credit for that savvy line too! Twerps! LOL!

Did you take pictures of the hotel? I'd like to know how sweet of a deal it was? Is Priceline better than Expedia?

It's funny that there is snow in Vancouver.

Rox said...
This comment has been removed by the author.
1:39 PM

I've had grey nose hairs for ages. No biggie.

You're just now finding them? I've been getting them for a good while now and I'm both younger and less salt and peppery. I'm really very ticklish up my nose, though, so I pluck 'em. I have to credit my brother for that idea, but it works great.

No gray nose hairs, however the gray has migrated south. I kinda knew it was all over when my chest hair started going gray.

Have you reached the point where you have to shave your ears? Maybe that only happens to those of us that are going bald.

Oddly enough, word verification is sproutio. I think it's making fun of all the stray hair that shows up in unexpected places on me.

oh god... that same thing happened to me a couple of weeks ago.

What? You think women don't have nose hair? We're just better at subterfuge, that's all.

Vancouver looks so beautiful except for that snow shit. Happily, we still have NONE here!

Enjoy So.Cal. Please break into Coto and get photos for moi!

Gotta love Serge, and you, for being fooled! XO, safe travels.

Love the picture, but I had to do a second glance at the clouds. To me, it looked like smoke from an oil fire.

Eh, look at me, the bringer of bad images.

Have a safe trip to SoCal. Certainly you'll be leaving the snow behind -unless your off to Big Bear.

At least no rain is in the forecast, though cooler temps are predicted through the weekend.

I should work at the Weather Channel.

Grey nose hairs??? I found a couple of those this year myself, but the real trauma for me has been the increasing amount of time I have to spend plucking random hairs off my ears.

I love Vancouver, haven't been for years. Glad you guys had a great time.

It looks like you are having a good time. Happy New Year!

In the words of the legendary Big Rosie Greenbaum, "Happy New Year ya bimbo"

Ah, that Serge! He's a man after my own heart, as that is totally something I would do.

I heard gray hairs were a by-product of too much grunting. ;-)

Glad to hear that you guys had a good time in Vancouver. Hopefully the States will be a little warmer for you guys.

The railroad is a huge part of Canadian history. Here's my vote for Serge maybe having heard the expression before.

Though certainly you have that great cue card hanging over your head to prove me wrong.

How'd you get the Montreal-ish weather to Cape Cod, I wonder.

AHHHH! You were in vancouver and I was lingerie shopping! Talk about a conflict of interests. I could have met you. Alas, however it is far easier for me to get to Seattle than Vancouver, which is one of the great mysteries of this island! Oh well, a dinner in a old train station (probably the P&O or the E&O) is cool! Hope you have fun for the rest of the trip. re seattle: Don't go to REI - it is a vortex of nice people who eat all your time! I only just escaped.

In Seattle, you must visit Archie McPhee's, purveyor of pop culture. You would absolutely love it, I guarantee.

I don't have the nose hair problem, but no one told me to expect guybrows. Why do they keep this stuff secret?!

Happy New Year guys! Best in 2009 and hurry home from Vancouver before you freeze!

You two are adorable.

grey nose hairs.....I believe that's the fifth horseman of the apocalypse.
Right up there with famine, war and disease.

larry said...
This comment has been removed by the author.
5:13 PM

the only thing worse is grey ear hair....

Well, stolen phrase or not, I do like it. The last time we were in Paris, we had a wonderful meal at Le Train Bleu in Gare de Lyon. So Serge's purloined phrase brings back fond memories.

Enjoy the rest of your trip!