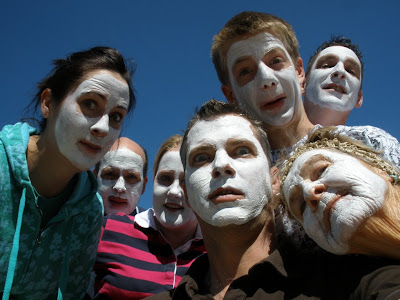 Even though it was a vacation, we still had some structured activities. I thought of it as Family Camp. We had a white elephant gift exchange, a scheduled hike, and a who am I activity. One morning, we did masks and took a bazillion pictures. I liked this one. Another day we all painted t-shirts in honor of the matriarch and then took the group shot with them. 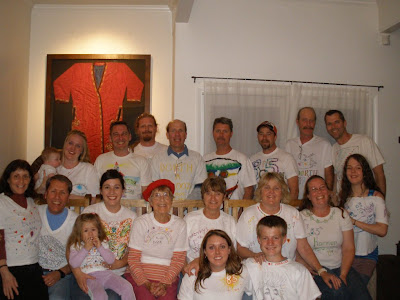 Cousin J is going to sew them all up into a souvenir quilt for grandma. Here you see the motley clan. See AJ in the bottom right? He and my dad went to the party store and bought fart machines. You know the kind, it has a bunch of buttons with different fart noises. When we went out to the restaurant for the big birthday dinner, I told AJ I'd give him five bucks if when we left, he'd cruise through the restaurant tooting the thing. I haven't laughed that hard in a long time watching the concerned patrons' faces as he accomplished the task with flying colors. 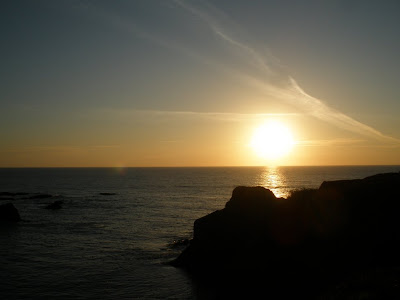 The last couple days the sea calmed itself down and though we had sunsets each night, I only thought to take a picture once. This is from the backyard of the place we stayed.

It was a great trip overall and I think everyone felt the same. It was decided that we shouldn't wait 5 years to do the next one and somehow, cousin S and I were chosen to organize the next event in 2 years. I'm happy to do it, but also know that it's a lot of work! I think one of the greatest things about this trip was that we were totally cut off from the world. There was no cellphone service and no internet. So liberating! I couldn't know if I had urgent phone calls or emails (which I did) so I didn't worry about it. It definitely made me resolve to cut down on the computer time. I guess I've already started too since I'm only up to the Cees on my blogreading list. I'll catch up.....eventually. Have a happy hump day peeps.
Posted by tornwordo at 7:52 AM

I'd like to get away from computers and cell phones for a bit.

I adore that mask photo! Your grandmother is a hoot. You and AJ sound like the perfect pair. Perfect for what, I'm afraid to consider.

What a celebration you created for your grandmother, I just love that. I can only imagine how loved she felt the whole week long. Very cool.

Will you adopt me so I can come hang out with your cool family? I'll squeeze out REAL farts for five bucks!

Yours is the coolest family ever! How can I join it?

I'm with Summer-I wanna join too. What a great looking family--very handsome and beautiful.

Can't really make out any of the T-shirts - do you remember what some of them say? Great idea, that - making up a quilt out of them. Your gram is truly blessed with such a family.

So are you going to organize the next one for Gaspé in July? Seems that'd give you similarly expansive views and plenty of scope to escape the digital world. And mean a little less travel for you.

As to fart machines, if you have an iPod Touch or iPhone you can download the iFart application.

It's got a delay timer on it so you can really enjoy the fun.

I just LOVE the way your grandma is in there like a dirty shirt in that mask photo! She's got spunk, and your family seems like a hoot!

What a great family trip. You can tell how close knit you all are despite the physical distances.

Fart machine. Good God. It definitely runs in the family.

I love the mask activity! Here's one for next time: last year when our family gathered together, my brother organized a scavenger hunt. Boys vs. girls, you aren't allowed to buy anything. Both sides submit ideas for the list and the judge gleans it down to twenty. Time limit: two hours. We were on foot in a tiny town, and it was a blast. We had to get a bsns card from a city official, a Rayovac battery, etc. We had strangers buying things for us! Oh, and I had to snip a chest hair off a guy.

Birdie said...
This comment has been removed by the author.
9:05 AM

Your reunion looks like TERRIFIC fun and just the break we all need from time to time. That mask photo is a classic, to be sure.

Hey you look like a mime troupe in that first picture. I would have been laughing my ass off in that restaurant. What a fun cousin you are?

The world loves a Mime!

What a fun trip! It makes me long for the annual family summer trips to the beach house that came to an end when my stepdad died.

That mask picture made me smile all day long.

That pic is fab!

Oh how wonderful! Nothing really to add to the comments, but I love the fact that your family can enjoy both masks and fart machines together. Definitely something genetic at work there. And getting away from phone and internet is SO refreshing. Now I need to go somewhere beautiful and remote.