* It's been a hard week. It's always like that after the relaxing cadence of vacation. I'm resisting changing that cadence and have woken up 20 minutes before having to leave the house twice this week. For me, I need/want 90 minutes from waking up to leaving the house in the morning. Otherwise I'm not fully awake.

* It's supposed to be 80 degrees this weekend (26C). This is the weekend where I will be astonished at the number of people in this city. That's because every single one of us will be outside. They could charge $20 per chair on the terraces (patios) tomorrow and still fill them up.

* How much would it take to retire forever? For us it's half a mil, that way we could pay off the buildings and live off the revenue they generate. At the rate we're going, that will be in 22 years. Barring the unforeseen of course.

* We ate cheetohs before bed the other night. Those things are evil. The reason I had them is that I tried this new white trash recipe for scalloped potatoes. I hate to say it but they were darn good. You slice up a bunch of potatoes and layer them with a can of condensed cheddar cheese soup. Then you sprinkle crushed cheetohs on top and put in the oven for an hour at 350. (I sprinkled some bleu cheese crumbles on top, but serge said that ruined it. He's a bit antsy about the moldy cheeses.)

* Here's an oldy but goody from the blog. Serge told this story over vacation.

* We put an apartment up for rent and not one person has called about it. That never happens so maybe the recession will finally be hitting close to home. Bummer.

* In Chicago when we were waiting for the shuttle to the comped hotel room, a young man approached me with a very heartfelt and earnest rendering of misfortune. He wore a backpack and explained that the airline had lost his checked bag and he was stuck at the airport with no ID, money, or anything because it was all in that bag. I started laughing right away and said, "Well that sure was stupid putting all of that in that other bag. This is probably a good lesson for ya." He admitted that that was a bad idea but if I just had $6, he could get a hotel room for the night. I kept laughing and said, "Dude, you gotta get a better story than that." Then he got all irate and hurt saying he wasn't homeless and no common beggar. I said, "Look, if you're lying, fuck you, and if you're telling the truth, then this is a great lesson for you. Now go try your story on someone else, there's plenty around here." And that's precisely what he did. (It's such a bad story though. You can't get through security without ID after all.)

* Another mask photo. That sure was fun. 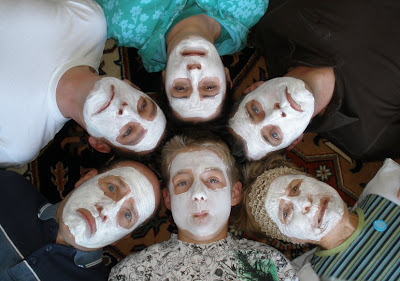 Posted by tornwordo at 6:50 AM

It's supposed to be warm here too. Finally!

What are the masks made of? Is it a homemade recipe? Something you found in the cosmetics aisle of your local drugstore? Or did you make a special trip to Mimes 'R' Us?

That scalloped potato recipe with Cheetos DOES sound evil -- but good!

You should call it the "Heart Attack Special". All that sodium!!

The apt looks great. Not one call, huh? Are you sure it got posted?

We both used the word "cadence" in a post today. It's the little things in life that consume my brain.

Enjoy the weather, it's going to be gorgeous here, too. I can't wait!

Serge has much to learn about the loveliness of moldy cheese :)

So I'm not the only one who needs a lot of lead time to prepare for the day. I figure I can be passable in about an hour, but only because I have an hour's commute, coffee at work, and get there a half hour before my shift starts.

Remind me to tell you about the autograph guy in Delhi.

You have to tell us what you used for the masks. I want to do that with my family!

That potato recipe is so simple even I could make it, and that's saying something. It does sound like a heart attack casserole, but those are always the best ones.

you are one tough cookie! i would probably given the guy money. i'm such a gullible softie.

That could be a meme. Come up with a good, believable story to get people to give you money.

I loved the egg/fart story the first time. I just told it to someone the other day...

The mask photos are fun.

First off, I too need at least 90 minute lead time, preferably 2.5 hours! I need to "fart" around on the computer for a bit and drink about a pot of coffee.

We too are experiencing the 80 degree spike this weekend. I'm psyched. I've actually been able to turn the thermostat off and open the windows.

The egg sandwich story is disgusting, but funny. Poor Serge.

And I love the family photo. Looks like great fun.

You have less stuff on your sidebar than I do so I think it will be less complicated than mine.

Although if your blog roll do not automatically transferred, it will be a real pain to redo them :P

Warming up nicely here in Providence. 70's and 80's next five or six days! I'm loving this.