It's been a few months since I've done the 12 of 12 thing. That would be because we were in Cuba on December 12 and Hawaii on January 12. You saw all those pics, just not in this format. I remembered about it being the 12th just as I was getting ready to leave for work. I snapped this on my way out the door. You can see Serge's explanation on why he's sleeping on the couch on last Sunday's post in the comments. 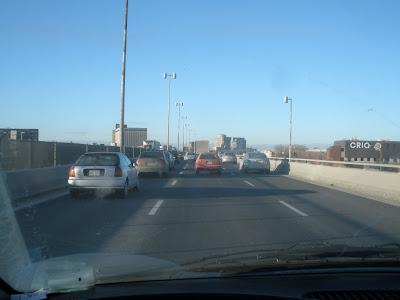 I'm doing intensives this week and next which means a half hour commute out to the suburbs. It's trafficky but nothing like those going in the opposite direction, toward the city. The day started out bright and sunny like it had been all week. 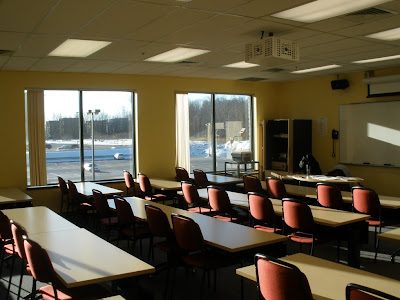 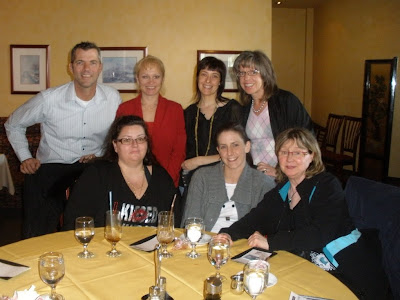 Since it was Friday, the last day of the intensive for this group, we went out to lunch together. They all had to speak only English and I had to only speak French. They always get a kick out of that. 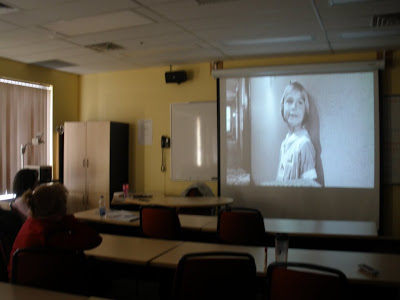 After lunch, it was time for our final activity - watching a movie in English. Who can guess what we are watching? I'll give you a hint. It was from 1973. 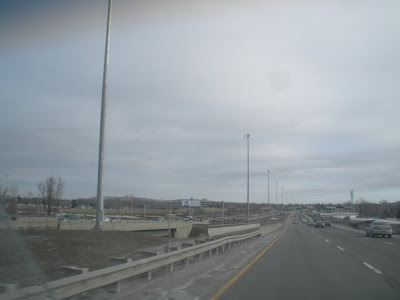 By the time we finished the movie, it had clouded up. This is on the drive home. Montreal is off in the distance behind the little mountain (looks like a hill from here) on the left. 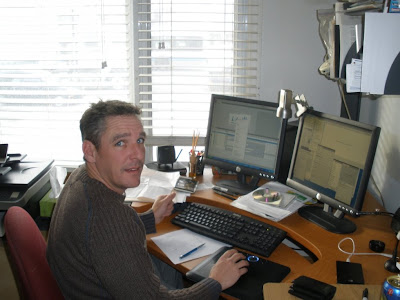 Serge at work. At home. Which is really the same thing for him. 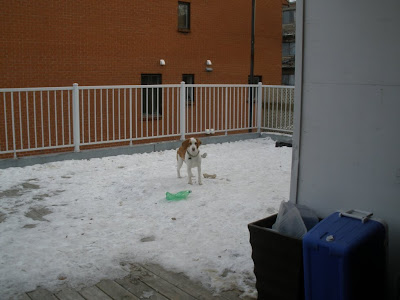 Where's Georgie? Oh there he is, amusing himself outside. He can spend hours out there by himself running around. 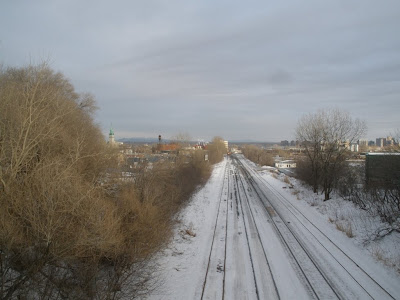 I had to run over to the market for a couple things which means I walk over the railroad track bridge. I know Java likes this shot. Still pretty wintery around here. 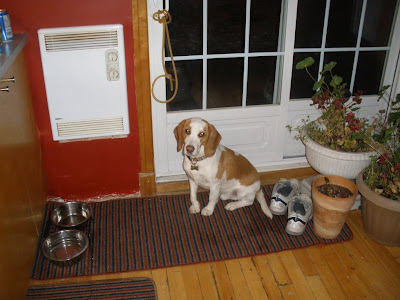 Came home, made some dinner and drinks, fed Georgie, and here he is waiting to go outside to do his business. He's still trying to eat his turds now and then. How can something so cute be so disgusting at the same time? 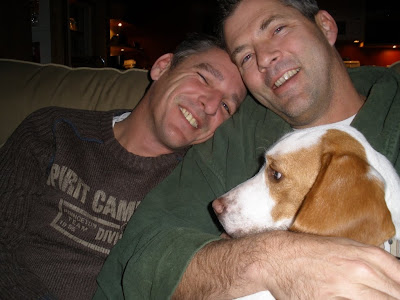 TV time together in the living room. 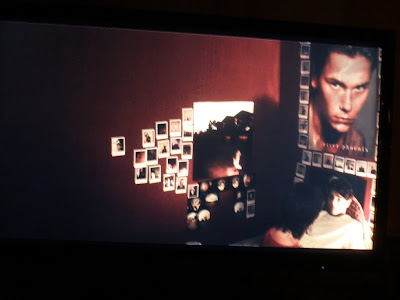 We watched a movie, J'ai tué ma mère, which was excellent. Even Serge liked it and he is a hard sell.

If you'd like to see other 12 of 12s from around the world, head over to Chad's blog and check the comment section for this project.

Posted by tornwordo at 6:54 AM

Is the movie Paper Moon with Tatum O'Neil?

BTW, I love your blog.

Georgie...so cute! Is that a water dish on the porch? Bandit has a similar one.

J'ai tué ma mère really is excellent. I saw it in the cinema when it came out last spring.

LOL at Serge only seeing faults with the pic of him sleeping on the sofa, I didnt see any of that.

That Georgie is one cute puppy.
Nick UK

Dude, the next time you go to Cuba and Hawaii, take the camera! I think my best 12s are the ones I shoot when I'm not at home.

Yeah, my spouse would have the same reaction to a photo of him sleeping on the sofa. And then he'd say he looked fat in the picture.

You mentioned 'J'ai tué ma mère' when we were up there last summer but we didn't get to go see it. I'll have to see if we can track it down on DVD here.

That's a great picture of the three of you. When I look at Georgie, I try not to think of him eating poop.

Great shots. I never remember 12 of 12 until it's too late. Oh well. I should probably program an alarm on my computer...

12 pictures is too many for a blog I think - I looked at a couple of these 12 on 12 things but get bored quickly.

Should be half a dozen max.

I need to rent J'ai tue ma mere [agh! does anyone know how to do accents on a mac? I'm so used to my PC]

Love the pic of Serge at work.

Your dog is incredibly beautiful!

I really loved this post, I should attempt a 12-12 next month, if I remember.

I love Serge passed out, yet Georgie so alert.

LOve the 12 of 12 what a cool idea. Dunno know what movie that was..I have a bad movie memory.

Thank you for the train track picture.
I love the picture of the happy family at TV time.

I enjoy sleeping on a comfortable couch, but it has to be long enough so I can stretch out. Serge, don't your legs get stiff and cranky?

I love it when we get a good peek into your life! :o)

LOL for Serge he doesn't really hear the difference between "t" and "th". He meant fatty.

Your house looks GORGEOUS. I'm so jellerz of you that mis ojoz can't stop staring at your pix and now feel like they're bailan en fuego!