Georgie in the park on Sunday 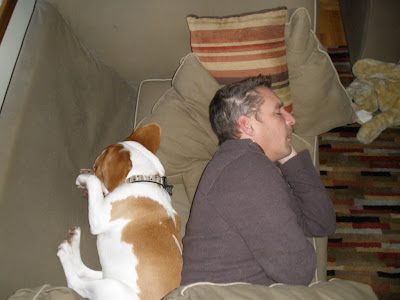 When I got up this morning, I didn't see Georgie. But then I noticed Serge on the couch using the cushion as a blanket. I can't believe they are both sleeping like this. It's awful cute though don't you think?

Georgie cracked me up yesterday. We were at the doggie park and he was running around like usual until he started seriously sniffing the ground near me where another dog had peed. This is easily evident in the winter as the snow-covered ground looks like a bunch of kids did some string painting with the color yellow. So he was sniffing a stripe near the fence and then lifted his leg to pee on the fence. For several seconds he stood there but no pee was coming out. Suddenly a large brown orb appeared from his anus and tumbled down his leg. He cocked his head in that what's-going-on way and then realized he was shitting and assumed the squatting position to finish the movement. So cute, so dumb. But I love him still.

Well this is it for a while. The next two weeks I'm working all out every day. Kinda like normal people. I don't understand how y'all work 40 hours a week year after year. It kicks my butt to do it for one week! But it's fun too, by the end of the intensive sessions, we've all bonded like family. I'll try to pop in during the week, if only for a quick photo or some such thing. Have a lovely Sunday.

Posted by tornwordo at 7:22 AM

That picture is just too adorable for words.

You academics kill me with your 40 hours a week being full-time. I wish! 40 hours is light!

I love this pic!

Good luck with the intensive sessions.

The picture of the two is priceless!

...and there is finally a pooh story. It's been too long coming (and oddly enough - not yours).

"then he realized he was shitting" cracked me up!

I took our Beagle, Walter, out for a morning pee the other day. He sniffed around for a bit and then walked up beside a tree. He proceeded to lift his other leg and pee away from the tree towards the street.

So cute, so dumb.

Welcome to my work world. I get to school around 7:30 on a good day, and try to leave by 6 every night.

I do get a 40-minute lunch though. That's something. Although, I'm not allowed to leave the school grounds before 4 pm. Weird, eh?

My work weeks are generally more like 60 hours plus. I'm just trying to find a day job so that maybe I could get down closer to a 40 hr week.

You do realize, don't you?, that if Mason ever finds out how spoiled Georgie is, that there will be serious trouble here. Stop setting the bar so damned high!

That picture is too cute. Tooooooo cute!

Very cute, but it does look as if Serge is at risk of ending up on the floor!!!!
Nick UK

This definitely is the most precious pic on your blog. I *love* it/your two boys. The way Georgie covers his eyes with his paw - sososo cute!

Of course, if you were a REAL musical theater queen, you would have more precisely entitled the post "Sunday in the Park with Georgie."

I'd probably drop dead if I worked four hours a week...just sayin'.

That picture needs to be framed. Seriously adorable.

Indi spends so dang much time searching for the right place to poop that eventually, a turd just sort of falls out of her butt as she's walking back and forth and she whips her head around, oblivious as to what just happened.

I swear - my dog did the exact same thing on our walk yesterday - except he never noticed that he wasn't peeing!! I was a little worried that maybe my puppy was "special" but .....

Wonderful images of great guys to get you through this busy period!

Why are the child and the spouse both sleeping on the couch?

Ok! Let's make it clear...Our couch is extremely comfortable...and our bed too. BUT the couch for a reason I don't know(or don't want to explain) makes my back feel good. And I get to switch the channel on the tv on demand when Georgie is asleep.

This is a terrible picture:
Hair are all seperated, double chin, fathy belly.wark wark wark...please focus on something else within the blog.