Shopping ethics, or the lack thereof 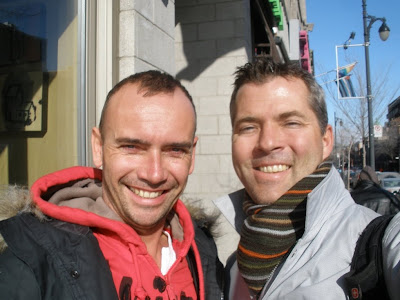 Hey look who was passing through town yesterday. It's Franck who was on his way to Prince Edward Island. He had just been ice fishing in the far North. Come to think of it, I never asked if they had caught any fish. We had a quick meeting at the village Starbucks before he was off to the airport. The nice sunny day belies the frigid temps, though it wasn't too too terrible.

Later, Serge and I were at the shopping center and we had to go into the drugstore for a couple of toiletry items. When we met back up near the checkout, Serge had a new dvd player in his hands. Before I could protest, he said it was only 40 dollars, but then I protested anyway reminding him that we have a perfectly functioning dvd player, it's just the remote control that doesn't work (since Georgie ate it.) His retort to any purchasing protest is always the same, "I'm buying it." Knock yourself out, I then think. So it's our turn at the cashier and she scans all of our stuff and I notice that she doesn't scan the dvd player. The total is still over fifty bucks (we bought shampoo, vitamins and cold medication etc.) and as Serge is getting his money out, I'm thinking, "Don't say anything, don't say anything." And then he says it, "Did you scan the dvd player?" The cashier then said, "Oh, you got that here? I didn't know we carried that." And then she scanned it for us. Outside I said, "I can't believe you." Serge, not knowing to what I was referring, started to defend his purchase of the dvd player again. "I don't like having to get up and use the buttons on the machine instead of the remote. We needed it." I said, "No, no, no. Not that. Why did you ask her if she had scanned the dvd player?" He said he rued it after he said it, but that he is an honest person and proud of it. Sheesh. He never pays attention at the cashier, if they give him correct change or not, if the price scans correctly or not, but the one time he could actually score something, he blows it. Ah well, it's his money. I'm sure some of you will think less of me, but a cashier forgetting to scan something is not my issue, and I would never bring it up. Cost of doing business. You do know the ridiculous markup on everything you buy, don't you? I'm glad the honey is so scrupulous though, even though it's expensive that way.

Posted by tornwordo at 6:45 AM

I think anyone with a grain of honesty in their soul would admit to the whole "don't say anything" bit too!

Remember when DVD players came out and they were $500?! For that matter, remember when VCRs were $500? Lord almighty, I'm old this morning!

I think it's one thing if you get home and realize a mistake was made, however, if you leave the store knowing you didn't pay for it, then it's stealing.

As a retail District Manager, the people most often hurt by stealing are the cashier - could be fired, the managers who lose pay because of higher shrink rates and the customers who pay higher prices.

Serge did the right thing. Hugs to him for being honest.

The picture shows it too: you're taller

I seem to have a price threshold for honesty. A package of chicken or a bag of candy not rung up, I'll gladly take. A DVD player, though, I would have likely done the same as Serge.

Frankly, I'm surprised at you.

How smart is that cashier? Do Canadians often carry Electronic Appliances around with them? Maybe Serge wanted to review some DVD'S before purchasing them?
I remember my first VCR. It was an RCA and weighed 50 pounds. It cost $800 dollars and that was when the dollar was still worth something. I did get a free blank VCR tape though...unless they just forgot to scan it. Ed

I'm with Sean on this one.

I've got a skewed moral compass too - I'm likely not to say something, but half the time it's because I'm not paying attention either. And really, managers et al - most theft is perpetrated by employees according to stats, not even customers. Not that that makes it right, I suppose. And far as I know no one ever got fired for something they're not aware of doing.

I've corrected cashiers when they've under-charged me or given me too much change back. I don't think this kind of thing ever hurts the fat cats, it always ends up impacting the little guy.

I must say that as long as you and Serge have been together, it is somewhat weird that you talk in terms of "his money" and "my money". Isn't the money that the two of you have combined?

I would have done the same as Serge. If a cashier or waitress forgets to charge me for something, I tell them. Its just good karma.

I always correct the cashier if they miss something. I figure anything I save by not saying will cost me at some point down the road.....

i wouldn't let it pass either. i've gone back to the store to return a dollar i got in error. if i'm going to pay attention and make sure that i'm getting the right change (as not getting enough) then it's also up to me to be honest on the other side. in my opinion, if you go through the till knowing that you're not paying for something because the cashier didn't notice it or missed it in a bunch of other stuff, it's the same as if i tucked it under my shirt and sneaked out of the store. i wouldn't do that either.

taking something that i've not paid for isn't something i can do and feel good about myself afterwards.

LOL at Serges honesty causing you pain, specially when it was not something you wanted to purchase anyway!
Like GayProf I think I have a threshold for honesty, a packet of oxo cubes is OK, as was the small Lego polar bear my child "stole" from the toyshop and I found in her pocket later. But I would feel too guilty to do it deliberately.
Nick UK

Honesty is a good thing.

Sorry, but I'm with Serge on this one.

Oh boy, I love me a good old-fashioned lover's quarrel. And, by the way, did Franck offer up the tawdry stories of his escapades on his recent travel journeys? I think probably not. Happy faces on you boys there in the pic!

You already know what I'm thinking.

are you jewish? i can say that because i am and in my house they would say, good for you!
not that this is morally right, just culturally celebrated!
donna

I'm Jewish and if I tried to pull something like that my dad would have kicked my ass and my mom would have been utterly ashamed of me. I don't know what kind of family you come from, but my Jewish family doesn't celebrate cheating people. Nor do any of my Jewish friends. But thanks for perpetuating a stereotype that has contributed to the oppression and persecution of our people for centuries.

The movies you watch on your dvd player will be funnier now, I promise. If he hadn't paid, they would've been boring :)

Just in case Georgie is naughty again, there are several remote control replacement sites online. I ordered one when Indi ate a remote (what is it with them?) and it was a good buy. We're spoiled by them, but I'm with Serge. I hate having to get up and adjust levels without a remote. How sad.

Anon Ed asked how smart the cashier was. Here another thought. How many DVR's did she not ring up and how many more would have walked out of the door if not for Serge? How many others didn't tell the cashier?

Serge saved that store from loosing more than 1 DVR.