* We have two garages but we only use one to park our single vehicle. There is a no parking sign in front of the garage that we use, but not the other one. Serge gets really bent out of shape when someone parks in front of that garage, while I really don't care. Serge even threw an egg on the one girl's car who is a frequent "offender". That was funny because she obviously never washed her car as the residue lasted for months. Anyway, he gets really clipped about it as though that's our "reserve" spot. I told him just to buy another no parking sign if he feels so strongly.

* We're supposed to get anywhere from a slushy rainy mix to two feet of snow this week. I'm really hoping for the former.

* We got Cirque du Soleil tickets for the new show (still unnamed at this point). All the new shows start here and then travel around the world. We got a couple seats for a 4pm show in early June. I love the idea of a 4pm show. We can be home by dark.

* Showerhead in French is shower apple.

* Were you as traumatized as I was when they showed that luge guy having his fatal accident? I just can't understand why they did that. It reminds me of Dirk's blog title. Too disgusting to contemplate, too compelling to ignore. (And I'm sad that he changed his header. For the longest time it was a closeup of a cameltoe. Now it's rotting teeth which is definitely worse.)

* The light is definitely getting more springlike. Actually, it's the same light as we had back toward the end of October. But back then it was waning, so it was depressing. Now that it's gaining in strength and heralding spring, it is uplifting. Perception indeed is reality. 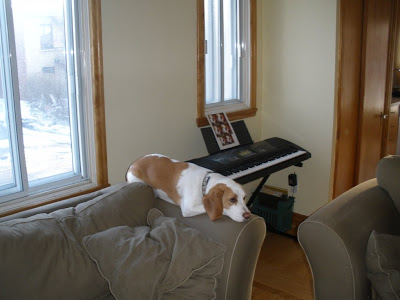 * Georgie isn't the brightest of the bunch, but I swear he reads my mind. Here he is as I was getting ready to head out the door yesterday. Somehow he knew I wasn't taking him. (In which case, he'd have been crying and jumping.)

* I start teaching a couple of new evening classes next week. I hate teaching in the evening since it encroaches on martini time. I take them though and tell myself, "It'll be good for you." And it probably is, but I still don't like doing them.

* Montreal is infecting my speech. I've caught myself saying "take a decision" and "open the computer" and "take a coffee" just this week alone.

* We watched Paranormal Activity the other night. I LOVED it! It was creepy as all get out and the constant shivers ricocheting down my body were so cool. I used to hate that feeling, but now it's kinda nice, similar to that which I get when someone caresses my scalp. I wouldn't like it if it were due to something scary in real life, but knowing it's just a movie made it okay. And at the end? Even though we had predicted it, Serge and I both screamed loudly, and then cracked up. Gotcha!

Posted by tornwordo at 6:43 AM

I didn't realize they aired that accident. Ugh!

Georgie is looking cute. Bandit loves to lie on the arm rest too. That way he can see out the window.

I would love to see Cirque du Soleil! They don't usually have shows in the towns I frequent. Might have to make a road trip out of it. But Great Big Sea is coming in March!

Thank you for the Georgieness.

"Taking a coffee" sounds so medicinal.

Shower apple? Hehehe..
And I'm with Serge, I'd be upset about the car in front of the garage too....even though it isn't a big deal.
And I've never seen Cirque du Soleil. My loss from what I've heard.

call a tow truck/parking authority? a couple of tickets or an impounded car will stop someone from parking in your spot.

"Pomme de douche", eh? I'll have to remember that one. When I was studying in Spain, my classmates and I started speaking English with Spanish syntax and direct-translating Spanish expressions. It's a pretty natural response, I think.

A couple of weeks ago we had a lost Mexican truck driver in the driveway at work. He started asking me for directions and was speaking a total mix of English and Spanish, which I think was perfectly natural for him. Fortunately, it made perfect sense to me, too, but I switched to all Spanish to make it easier.

I love Cirque du Soleil..you are so lucky.
The luge accident didnt bother me. I guess maybe because there was no blood splatter.

I have tried to watch paranormal activity..I cant get through it..it gives me a headache.

I'll keep my fingers crossed for the slushy rain mix (that's what we got).

And was that a request for the return of the cameltoe? Hells yeah!

I couldn't believe they showed the actual luge accident, either. I can still see it as clear as can be in my memory. It was awful.

Georgie is too stinkin cute. He does "pathetic" just as well as Indi does.

I'm always so amazed by dogs' mindreading abilities. I've specifically gone out of my way to not give any external signs of whether I'm taking her or not, and Willow still knows to be excited or storm off and act depressed.

Georgie is way smarter than you think.

As for that luge accident, it was disgusting, not that they showed the lead up to the crash, but the sudden violent stop.

But if it bleeds, it leads.

They take decisions here as well. And open computers, but only when they're laptops. ;-)

The parking thing would wind me up as well. I would HAVE to leave a note!

Is the woman a tennant? Ultimately I think that Serge should buy a sign, but it is your property. I used to get furious when one of our neighbors (not nice) used to park in our parking spots (our deeded property) when we lived in our former home. It was a townhouse situation, but the parking areas were part of our property, not a parking area common and open to all. I likened it to a neighbor parking in the driveway of another neighbor.

I absolutely loved Paranormal Activity when I saw it in theatres. What I loved about it was that you were scared from the shear anticipation of something happening. That is real fright right there.

I absolutely love your dog! How beautiful!

The stuff I have in my head is more scary than the Paranormal Activity movie. LOL!

I'd go buy Serge another No Parking sign before HE gets charged with vandalism or something.

And yes, the longer days are better in the spring!

Love that photo of Georgie!