Just some more drivel for ya 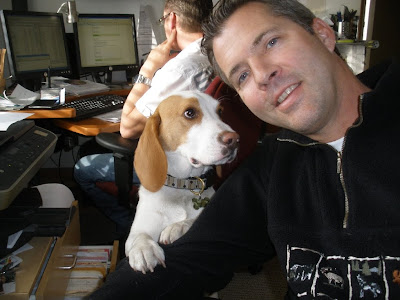 Here's a pic as promised. I took this one because he was bugging the hell out of me trying to climb onto my lap. It's not like I'm a monster or anything but after a couple hours on my lap, my legs hurt. He doesn't seem to understand that and keeps trying to climb up anyway. It looks like his nails are getting a bit long in this pic. I don't mind clipping them but he doesn't like it and Serge refuses to help me hold him still. Serge is too squeamish to be part of this activity. Honestly I think it's the queeniest thing about him, this nail clipping squeamishness. Anyway we just discovered that Mondou (like PetSmart) across the street has free clippings for your pet once every two weeks. So I'll be taking them up on that service.

The weekend was quiet, bordering on boring, and the weather was dreary as well. We hung out on the computers mostly, and I daydreamed on travel sites. See, what I like to do is pick a place I'd like to visit and then see how thriftily the journey there can be had. I was really surprised to see that we could fly round trip to Australia for a thousand bucks. Well now we can't, that sale ended yesterday, but that has got to be the cheapest I've ever seen that flight.

Did I ever mention how ridiculous the prices were at the hotel we stayed at in Madrid? Because they were not just laughable, they were insulting. For example, if you wanted two eggs brought to your room, not a whole breakfast - just the two eggs, you'd be charged 19 euros plus the 5.50 euro delivery fee, plus the gratuity. Oh and we were really hoping to get a few things laundered but when I saw the prices I just couldn't do it. 7 euros to wash your socks, 16.50 for a shirt! All of the prices for cleaning the garments were more than I actually paid for the garments. So I just bought some shirts instead.

What else? Oh I don't know, I was pretty alarmed when I saw the news and that 2/3 of Americans (according to ABC news) took the story of Adam and Eve as fact. When I hear statistics like that, I tend to think all is lost. I bet that figure would be less than ten percent among Quebecers. I just don't get how people do that leap where the book is "the word of god" even though we can all agree it was penned by men. I mean it didn't just Samantha Stevens nose twitch into existence after all.
Posted by tornwordo at 6:09 AM

I did not see the Adam and Eve story, but I'm not that shocked. We're a country of idiots on so many things.

Why can't we at least call it a metaphor and say 'sex' was the big no-no. Maybe if priests knew that, they wouldn't diddle where they do.

Georgie is as cute as ever. He's like "love me, PLEASE!"

The bible was written EONS ago to make people feel better about their existence. Why do people still feel the need to take it at face value? They scare me.

Georgie, on the other hand, makes my heart melt.

I believe in the power of 80s commercials.

I know Georgie would love our Sophie. She likes the 'little' guys! He is so cute.....those eyes!

I would hope that the Adam and Eve story has had its day and used up all its usefulness.

Have a great week.

I hated cutting my childrens fingernails when they were babies, incase I cut them, my husband was worse, it would have been marvelous to have a baby clinic where I could go have them snipped.

A friend advised me never to mention that I was an atheist if I go to the states!!!!!! Very scary.

I have yet to trim Mason's nails myself....relying on his groomer. And what do you mean he wants to sit on your lap but you're just too tired for it.......send him over my way.

Tuck's pretty good about nails, but Rosa could be awful. The way we ultimately worked it out was that I would only trim her nails in the tub and for every nail she got a piece of kibble.

What's fun is to try to pin the Adam & Eve people down on how Cain & Seth were able to father children.

So what? You believe that minute particles came together and then exploded and made the Universe? Let me see...who or what made the particles? We are traveling through space at over 65,000 miles per hour. The Sun holds onto its planets but not strong enoough to pull them in and burn them up. The Sun is many times larger than our moon but during an eclipse the moon can block out the sun. The Bible says that there was darkness on the face of the deep (space) we didn't know that space was dark until 1961. Oh, Cain and Seth married their sisters. Everyone is related on Earth. We may be wrong and if so nothing lost but if we are right? Since everything has transpired exactly as the Bible predicted, so, it is not a leap of faith for us to realize that Revelations will soon be coming to pass. A world leader who demands to be worshipped like a God. Persecution of all the Jews. The dividing of Jerusalem. The building of a Temple in Jerusalem where the world leader will sit on his throne. Jesus said when you see this man sitting on the throne then look up for the redemption of all christians is drawing nigh. Ted

Hey cool, your blog is read by religious idiots. You must be so proud.

It appears that the "Samantha nose twitcher crowd" is even more closeted in their little world than I am. Whodathunkit. They left that comment as "anonymous". He seems to write a lot of their stuff lately. *grin*

Love the look in Georgie's eyes, lookin' at you! I let the groomer trim the nails of the princess. I'm not squeamish, I just don't trust myself not to cut too deep.

First, the husband starts looking younger and younger (and cuter and cuter!) with each picture posted.

Now, the dog is beginning to look ever more adorable with each picture posted.

Even the photographer is looking better with each photo.

If these photos reflect real life, I need you to take my picture. Oh, about a bazillion times should do.

Good idea to take Georgie to PetSmart for the clippings. I'm equally as squeamish as Serge. I tried clipping Bandit once or twice and said forget it.

That's an expensive hotel (Madrid)! Australia would be nice. Speaking of traveling, it must be a Canadian thing. There were tons of Canadians (mostly from Alberta) on our trip to Mexico.

Just when I think the Georgie pics can't get cuter, they do.

Petsmart here charges seven bucks for nail clips! I took Indi there once and the very young "groomers" required three people to hold her down. She can smell their fear and she uses it freely. Now I take her to another groomer who doesn't put up with her crap. Indi still whines about it but the woman just ignores her and it's over in 2 minutes. I wish I didn't have to pay for this, but it's worth it to me because I'm in the Serge group on this one.

Sophie gets her nails snipped at PetSmart for $8. I'd do it, but she has black nails and I can't see where to trim.

The people who WROTE the Old Testament don't take it literally. Taken from the mythology of surrounding nations of ancient Israel, the Creation story is viewed as metaphor for the relationship between God and his people, like the Native American tales of the Raven and the Wolf. Literalism didn't start in Christianity until the turn of the last century. It's barely a hundred years old, and look at the damage it has done. God save me from your followers.

my absolute favorite pic of Georgie so far.

What's even better is that should an apocalypse happen, the main survivors would be the LDS people, who'd get to repopulate the earth. Shudder.