Oh yes it did 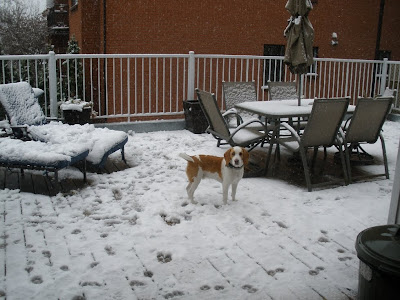 It snowed all day yesterday. Unbelievable. It was 17 the day before (63F) and then it snowed all day long. Accumulation would have been higher on the ground but the sun is good at melting it rapidly at this time of year, even through the clouds. There's still a couple inches on the ground this morning but it's switched over to rain now.

You probably heard us all groaning yesterday via the various connectivity venues - blogs, facebook, twitter. Gosh twitter, I haven't gone there in ages. It just seems like all the "important" tweets make their way into the regular media anyway so what's the point. I've tried, but I just can't get into it. I still Facebook every morning though. Is it okay to use FB as a verb now? It's the natural next step, don't you think?

Not much else to say, as usual, there were things I wanted to mention but now I'm blanking. I know, this is what pen and paper are for. Oh I know, did you catch Randy say "shit" on AI last night? I had to stop and rewind a few times to be sure. He said something like, "You've really hit your zone on this shit." Serge said he must have said "show" but after rewinding and analysing, it was definitely not "show". I wonder if the censors caught it. I bet Randy didn't even realize it. I should probably post that clip but I've already uploaded a Georgie video so that's what you're going to get. So get on the getting.

Posted by tornwordo at 7:03 AM

Snow?! I hope it's not heading this way. They call it the 'farmers fertilizer' here.
Didn't catch that on Idol.....gotta love live TV.

Georgie is the cutest effin dog in Canada!

Raining here. I thought of you all day yesterday though, knowing it was snowing there. Bleh.

I think I'm closing my Twitter because I'm just not feeling it. And I'm thisclose to doing the same thing with FB.

Wow!, can't believe you've had snow, although we're never really 'safe' until after May 24th...glad it wasn't us here in Toronto!

Just rain and cold here. I hear the northern New England states and part of NY got snow.

Luckily once you're through mid April here the chances of snow reduce dramatically.

Georgie is cute with the snowballs.

I go to the Retro Computing Society open houses and there's a guy with a space near their who brings his Border Collie with him. He loves to play fetch.

He'll just come up to you and drop a tennis ball at your feet.

That's what I love about dogs. They TELL you when they want to play.

Adorable! Uh, the dog, not the snow.

You can have your Canada. It's been chilly here with rain. I'll take that over snow any day.

Georgie is so cute!

Yeah what's really screwed is we got about four inches of slush down here, kinda like you folks, but JUST NORTH of the city they had four foot piles, all the roads shut down, the whole nine. Crazy. And I'm sure Georgie had as much fun as he could cram.

I was really doing other things waiting for GLEE, but I thought I heard Randy say something out of line.

At least Georgie loves the snow - glad it didn't last too long for you. Here our lilacs have made an earlier than usual start to celebrating the May-ing. Go figure.

I just returned from New Mexico where it also snowed... Go figure.

It seems like "shit" is now okay on t.v. They never censor it out of bbc programs, for example.

Watching Georgie in the snow is pure joy. But it's totally wrong to be doing this from late April!